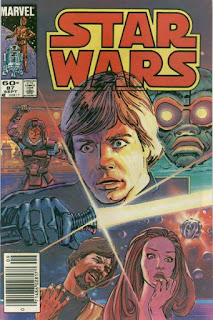 "Still Active After All These Years"
September 1984

In a Nutshell
Kiro helps disable a doomsday device triggered by the Rik Duel gang.

Plot
Continuing his diplomatic mission, Luke & Plif land on the planet Shawken, along with Kiro & Rik Duel's gang. As Luke, Plif & Kiro meet with Santor, the planetary representative, to discuss the upcoming galactic parliament, Rik, Dani & Chihido explore some nearby ruins, hoping to find something worth pillaging. When Kiro learns this is their intent, he rushes off, determined to stop them, while Luke continues the talks. Kiro finds the gang inside an underground chamber, and his scuffle with Chihido triggers a mechanism that seals the chamber. When word reaches Luke & Santor about their predicament, Santor worries they may have activated one of his people's long-dormant weapons. Reaching the site, Luke is forced to disable a defense mechanism, which reveals to Santor which device has been activated: a doomsday weapon with the potential to destroy the galaxy. With Plif's help, Luke is able to unseal the chamber & release Rik, Dani, Chihido, then he & Kiro journey deeper into the chamber to try & stop the weapon. They soon reach an underground body of water, and Kiro insists on going ahead on his own. Guided by the Force, Kiro manages to disable the weapon, which triggers a massive explosion. As Luke fishes out the unconscious Kiro, Plif declares that he can sense some signs of life in Kiro, & Luke declares he's going to keep Kiro alive, as they all him at least that much.

Firsts and Other Notables
Kiro tries to comfort Dani in the face of potential death, the first hint at a connection between the two that will eventually culminate in a romantic relationship later in the series. 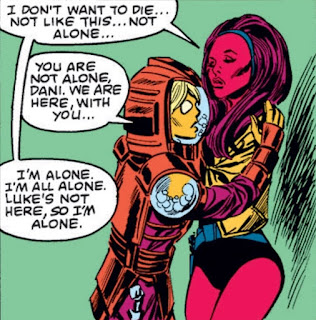 A Work in Progress
Rik notes that he’s never seen a Zeltron fix on one romantic partner as long as Dani has on Luke. 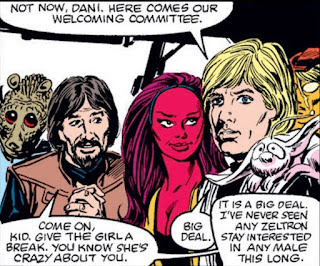 Santor says that many Jedi were born on Shawken. 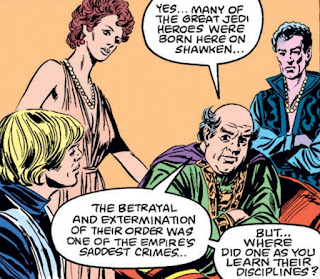 Zeltrons are apparently terrified of being entombed, which seems like an awfully specific fear for an entire species to have. 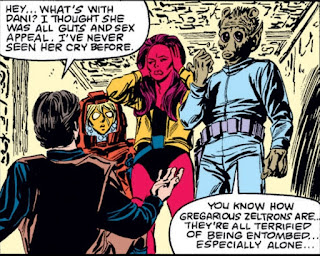 Just Yesterday, In a Galaxy Surprisingly Close By
Apparently, scientists in the Star Wars galaxy use the term Big Bang to talk about the beginning of the universe. 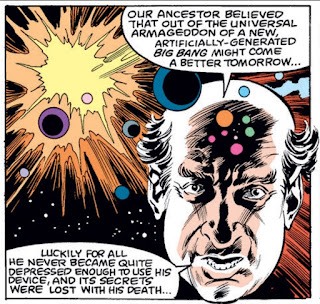 Austin's Analysis
Duffy finally returns to her central post-Jedi plotline and the more immediate mission of Luke, but this issue is mostly about developing Kiro (and, to a lesser extent, Rik & Dani; poor Chihido is still mostly formless) and working to integrate him into the series. The end result is a fairly straight-forward story, to the point where I kept expecting a twist to come: the nonchalant way the Shawkenese approach Rik's attempted thievery & their own history made it seem like maybe Rik's gang getting trapped was either some kind of trap, or a case of them inadvertently triggering the wraith of a seemingly-benevolent society, but in the end, this is really just about putting Kiro into a position where he can save the day (and, somewhat ridiculously, the galaxy). That feeling of waiting for a twist that never comes leaves this story feeling somewhat unsatisfying, and the spotlight on Kiro really just highlights that he's super-heroic (which we already kinda knew) and has a connection to the Force (which will be explored further down the road), but it's nevertheless appreciated to see the return of Luke and his diplomatic mission after so many narrative diversions, while featuring the (non-film) supporting cast of the series is never a bad thing.

Next Issue
The debut of Lumiya!