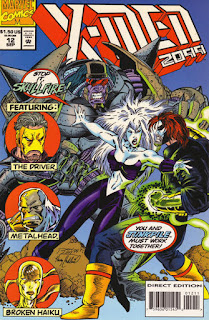 In a Nutshell
Xi'an tracks down the Driver.

Plot
Intervention from the black market's security forces cool the tension between Fitz & Junkpile. As Brimstone Love watches from a distance, Luna explains how she encountered Junkpile & traded freeing him for help. Meanwhile, Xi'an receives the location of the Driver from Haiku, but Haiku warns the Driver that Xi'an is coming. In Texas, Metalhead helps the Freakshow settle into their new home. At the black market, Junkpile joins Luna, Fitz & Xi'an as they set out for the Driver's base. Brimstone Love, intrigued by Xi'an, decides to follow rather than confront them. The group arrives at the Driver's base in Arizona, but are caught in a laser grid after entering by the Driver, who tells them the place is called the Garage, and it is the final destination for all who enter it.