Firsts and Other Notables
As with the previous Fleer Ultra set, this series features high-end production values (though not as high end as the "Flair Ultra" line), such as thicker card stock, glossy fronts, and foil-embossed lettering featuring art from a variety of comic book, sci-fi & fantasy artists (including Boris Vallejo, John Romita Sr., and former X-Factor artist Larry Stroman).

The main card fronts feature simply the image, with a black box on the bottom listing the character's name. Cardbacks are fairly limited as well, just the character’s name(s), a short bio, and the card artist’s name. No first appearance or power info, no group affiliations, etc.

The first 54 cards of the set, what would usually comprise the "heroes and villains" section of the set, are listed in straight alphabetical order, with no distinction made between the moral status of the character anywhere on the card.

After the alphabetical list of X-Men and their villains, a series of team cards are featured, with each team drawn by the same artist and the cardbacks written from the perspective of one particular team member. In addition to their “main” cards, all the X-Men get featured in the Teams section.

Amongst the various teams is a one-card “Alternate X” “team”, which teases the "Age of Apocalypse" Sabretooth (looking a little different than he will in the story). 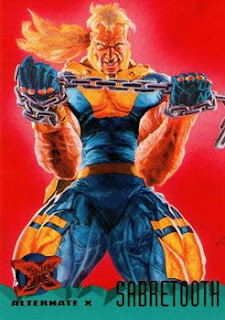 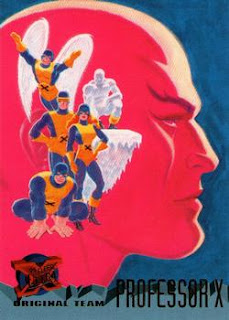 The Hildebrandt Brothers, fresh off drawing the third Marvel Masterpieces set, contribute the X-overs subset, as well as quite a few of the Greatest Battle cards.

The X-overs cards include "Phalanx Covenant", but leave out "Mutant Massacre".

While many of the Greatest Battle cards feature the usual fare (Cable vs. Stryfe, Wolverine vs. everyone), there are a few battles that get featured less often, such as Rogue vs. Ms. Marvel. 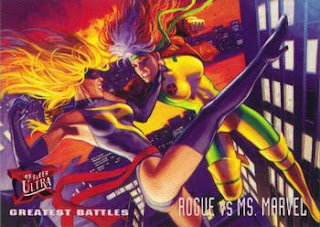 The Spring Break category features the X-Men vacationing on the beach, and seems to exist mostly as an excuse to feature the characters in swimwear (but is also kind of fun). 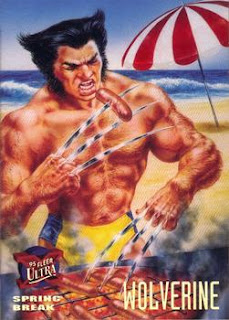 Prior Turrin, from the Adventures of Cyclops & Phoenix mini, gets a weird card where he’s depicted via what appears to be a physical sculpture of some kind. 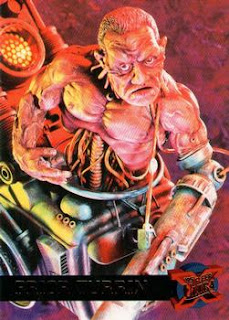 Variant Sauron cards exist in the set, with the direction the character is facing on the cardback differing between right and left.

Collection Recollection
Like the previous Fleer Ultra set, I received a wax pack of this for Christmas, resulting in me assembling roughly 2.5 full sets by the time I was done opening all the packs (which, as in the year before, I managed to ration out to last me at least a couple weeks into the new year).

This is also effectively the last trading card set I collected, bringing to an end a hobby that predates my interest in comic books (and effectively led me to comic books). While I would buy a few packs of the later Flair X-Men set, the high price point per card of those packs, combined with my still-burgeoning comic habit (with nine monthly X-books coming out of "Age of Apocalypse", plus all the extra stuff, plus some non-X-book comics) and still-limited income (I was still a couple years away from my first job at this point) pretty much put an end to any extra money I had for cards after buying my monthly comics (much later, as an adult, I'd buy a few more card sets, though always as full sets from a specialty shop or dealer at a con, as opposed to assembling one via the purchase of packs containing a random assortment of cards).

(Incidentally, I am planning on continuing "Unstacking the Deck" posts featuring later card sets, albeit ones I didn't buy in real-time, as I enjoy writing these posts and am still interested in seeing how the various card series evolve over time, especially as both the trading card & comic book markets contract & dwindle. Plus, it'll be fun to look at some cards I've never really seen before!).

A Work in Progress
Jean Grey is listed under her real name, not Phoenix.

Maverick’s cardback says his mutant power is the ability to see the immediate future, continuing his tradition of having powers he’s never displayed in a comic attributed to him on a trading card. 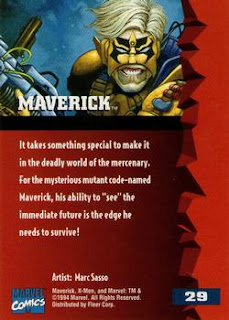 Mystique’s cardback references her relationship to both Rogue & Nightcrawler.

Wolverine is still depicted with metal claws on his cards, though a Greatest Battle card and the "Fatal Attractions" X-over card reference the loss of his adamantium.

The White Queen gets a "portrait" card featuring her classic look, as well as a Generation X card.

Though the name “Daytripper” is referenced on her cardback, Amanda Sefton is the name used for her card.

Meggan appears under the name “Tapestry”, which, I believe, is a code name Warren Ellis tries to give her during his run. 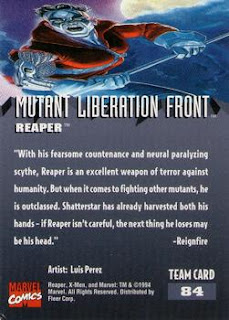 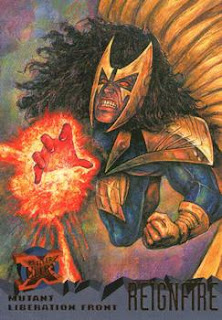 Con: O5 Marvel Girl doesn’t get to appear in her costume. Pro: she also doesn’t get sexed up. 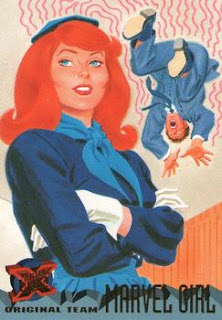 Xavier appears amongst the Gold Team.

Quicksilver is included amongst X-Factor, but the cardback references his return to the Avengers.

Though still not an official member of the team, Random appears on an X-Factor card.

The "Fall of the Mutants" card features Apocalypse solely on the front, but the event description on the back doesn’t even mention him. 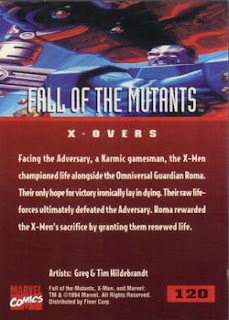 Of Their Time
The Adventures of Cyclops & Phoenix miniseries gets heavily referenced in this set, with Askani, Ch'vayre, Mother Askani, Prior Turrin and Redd & Slym all getting cards. 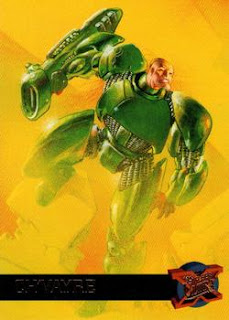 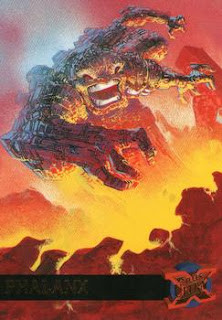 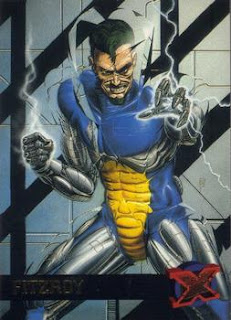 Sinsear, who had already made his last appearance when his card in the previous year's set was released, gets another here. 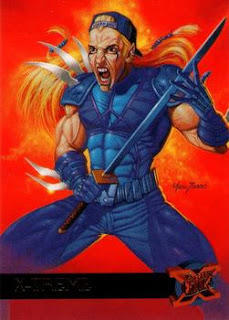 A very off-model (well, as off-model as a shapeshifter can be...) Copycat receives her own card. 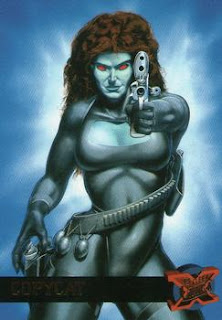 The cardbacks are still referencing the blue/gold teams, even though that distinction has mostly faded in the comics at this point.

All of Generation X get their own cards, including Mondo.

Feral is included amongst the MLF, along with Moonstar (the cardback, written by Reignfire, questions her commitment). 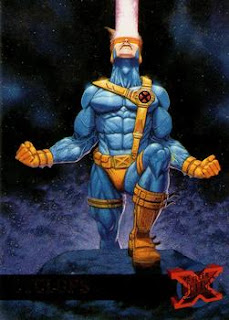 Cyclops is prone for iconic images and this is one of the best; I have a minimalist version of it on my phone case (it was also featured on a Wizard cover). 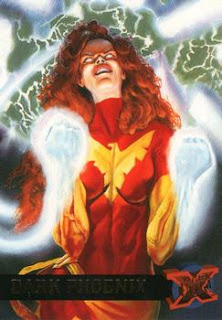 Captures both the raw power & insanity of the character. 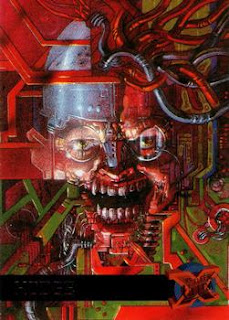 A great way to highlight the character's grotesque inhumanity and techno-organic physiology. 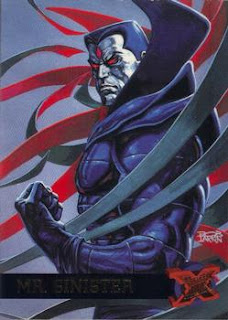 Mr. Sinister also tends to lend himself to strong cards. 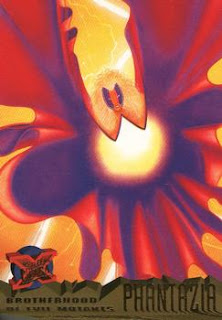 The cards in this series don't play around with perspective much, but this a good exception to that. 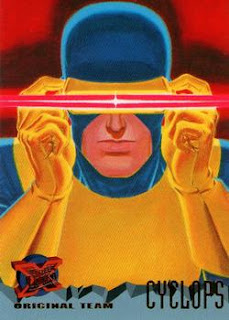 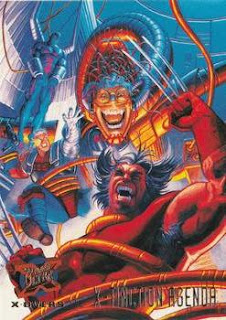 Unfortunately, most of the Hildebrandt Bros' X-over cards are fairly static (more than one just feature characters standing next to each other); this one packs in a fair amount of action. 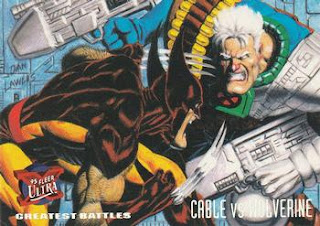 Lots of characterization with a great sense of scale.

Austin's Analysis
While this series carries over some of the strengths of the first Fleer Ultra set - the highly quality production values, the larger card count that allows for a greater breadth of coverage, and a strong batch of artists providing, on average, pretty good art for the cards - it also makes some decision that give it an almost minimalist feel, to its detriment. While the card fronts being adorned with little more than the central image and a banner featuring the character name does a lot to highlight the art, in many cases, the backgrounds are little more than large swathes of color, creating fewer images that seem to be telling a story or that hold the eye for more than a few seconds. The cardbacks, meanwhile, seem like wasted space, offering little more than a brief bio. Similarly, the teams approach is an effective way to include the varied depth of the X-line at this point in time, but the inclusion of, effectively, second cards for all the X-Men in this section seems extraneous, as those cards could have been used for something entirely different. As a result, while this is by no means a terrible set of cards, it nevertheless feels like a paler follow-up to the previous year's effort.