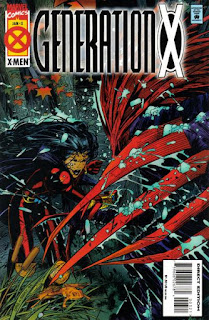 Plot
Banshee escapes from Penance thanks to the intervention of Husk, but Husk is injured & Penance flees deeper into the woods surrounding the school. Elsewhere, a woman named Cordelia tries to convince Mondo to go back with her to the States. At Xavier's, Jubilee & Synch encounter Penance, with Synch's aura protecting them. Just then, Banshee catches up with them, and asks Jubilee & Synch to get Husk to the infirmary. Synch agrees, but Jubilee continues on after Banshee & Penance. Elsewhere, the Orphan Maker shows Nanny his falling-apart-armor, and she declares that he's growing up. Back at the school, M & Emma confront Penance, but their psychic abilities don't stop her either, and Banshee declares they're just going to have to work to wear her down. But Jubilee is still on her trail, suspecting that Penance doesn't truly mean them any harm since she was brought to them by Gateway, and she watches as Chamber reaches Penance and, drawing on their shared experiences of having paid a price for their mutant abilities, convinces her to stand down. Later, Skin visits a recovering Husk in the infirmary, resuming their game of Scrabble.

Firsts and Other Notables
This issue marks the first narrative appearance of Mondo, a character who was billed in the pre-launch promotional material as a member of the team, but appears here chilling on a beach in the wake of a vaguely-alluded-to act of heroism. He is cajoled by his companion Cordelia to go to America and become a superhero; this is Cordelia Frost, youngest sister of Emma, making her first appearance. She will eventually turn Mondo over to the Hellfire Club in a bid for membership, kicking off the overly-complicated saga of Mondo (which involves Black Tom & plant-based Mondo clones). 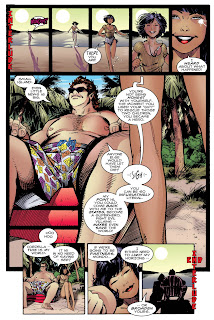 Penance can be considered to have functionally joined the school by the completion of this issue.

Nanny returns this issue, as she realizes Orphan Maker is outgrowing his armor (we also see that she has abandoned her previous “Humpty-Dumpty” armor as well). 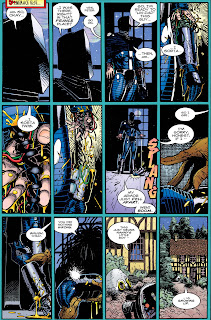 A Work in Progress
A narrative caption suggests that the rock-like form Paige adopts early in the issue is the first time she’s changed her body that extremely, which is forgetting how she turned into a bird during “Child’s Play”. 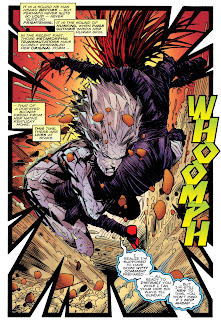 Synch’s aura is shown to mimic the properties of powers, but not physically change him (ie, when near Penance, he becomes as invulnerable as she is, but his skin doesn’t turn red & diamond-hard. 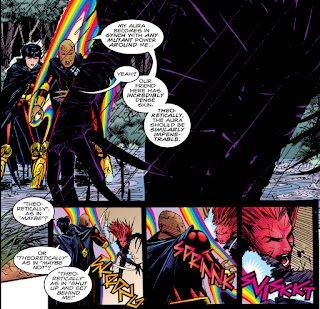 M stresses the word “imagine” when saying she can only imagine the torture Penance has experienced at Emplate’s hands, a further hint at their shared connection. 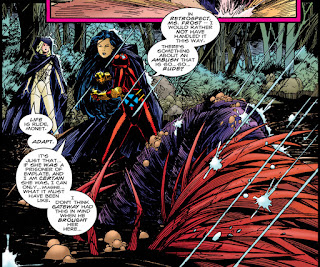 Paige theorizes that Skin wanted to stay back out of fear Penance would slice his skin, but he denies it.

Contributing to the more whimsical tone of the book, this issue ends with Monet teasing the next issue directly. 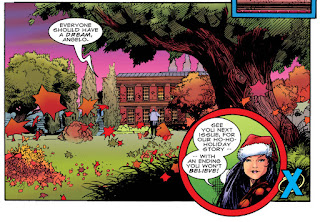 The Grim 'n' Gritty 90s
Skin is shown smoking a cigarette as he fills the “guy on a keyboard” role for Generation X.

Austin's Analysis
This is without a doubt the most action-oriented issue of the series yet, as it's basically an issue-long fight against Penance (with a couple one-page interludes and a brief two page denouement breaking up the action). But it's also not really about the action, as Lobdell uses the efforts of the group to corral Penance to highlight the characters via their respective approaches to confronting Penance: from Paige's foolhardy risk-taking to Synch's more measured risk-taking, from Banshee's focus on protecting the kids at all costs to Jubilee bringing her experienced eye to things, from Emma & Monet's shared (and ultimately ineffective) superiority complexes to Chamber ultimately bringing the fight to an end by drawing on his shared experience with Penance of being burdened & warped by their powers, each of the encounters between Penance and Generation X helps highlight a specific aspect of the Penance opponent's personality (only poor Skin gets the shaft, though the idea that he was legit scared of Penance is character-illuminating in its way as well). As with the previous issue, not a lot is happening here yet in terms of plot, but the two-part introduction of Penance does a lot to create a solid foundation of characterization for nearly every member of the cast.

Next week, I'm calling an audible on the schedule on account of some sudden work-related travel, and moving a couple of the single-post weeks ahead of the start of the December '94 books. And so, Unstacking the Deck returns with a look at the Fleer Ultra Set for 1995!