Force in Focus: Return of the Jedi Action Figures Wave 2 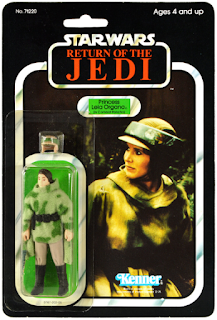 Firsts and Other Notables
A decidedly smaller wave than the previous one, this contains figures of just two of the main characters, Han & Leia, in their respective Endor garb (Luke will get his Endor-specific release in the later Powers of the Force line, alongside a new Lando figure).

The Emperor is this line's mail away figure, before being released on cardback.

The red clad B-wing pilot in this wave is considered one of the easiest vintage figures to find mint-on-card, as it was apparently a less-popular figure on release and thus warmed pegs long after other figures had gone (it probably doesn't help that we only ever see, at most, a B-wing pilot's head in the movie. 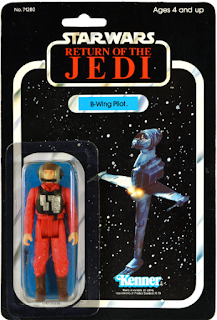 Leia's Endor figure one-ups Han's by coming with a removable belt/holster, capable of holding her blaster, in addition to her cloth camouflage poncho & helmet (Han gets a cloth duster and blaster, but his belt/holster is molded on).

I have memories of seeing the Rancor Keeper (who is, essentially, a half-naked bald man with a beer gut) hanging on a peg in the small toy section some grocery stores used to have (in this case, it was next to the cake decorating products, for whatever reason) while visiting my grandparents sometime in the late 80s (probably in '88 or '89. Maybe even '90). The particular figure was probably a version recarded as part of the Power of the Force line, but still, this was well after that line ran aground, something I was aware of even as a kid, when I was shocked to see it hanging there alongside the other meager offerings (I didn't buy the figure because A. It was the Rancor Keeper and B. I was probably saving my "grandma buys me toys while I'm visiting" capital for something better, but I've always kind of regretted not getting it, nevertheless). 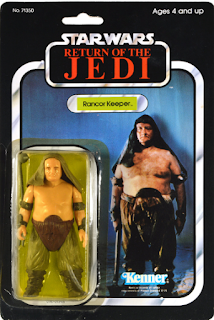 Two of the Ewoks released as part of this line, Lumat & Paploo are sometimes considered part of the Power of the Force line, but they were actually released on Return of the Jedi cards late in the line's run (they are also sometimes considered a third wave all their of Jedi toys, but I'm including them here for obvious reasons). 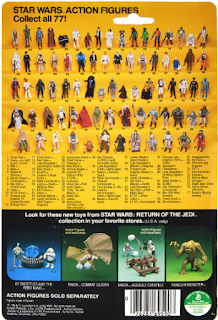 Favorite Figure
I had a few of these guys back in the day (Endor Leia, the ubiquitous B-wing pilot, Teebo), but of the bunch, my favorite is probably the Emperor. Not the most dynamic of figures (he looks especially silly if you try to do anything with the figure other than have him stand there), with the always-exciting accessory of "cane", but he is nevertheless a pretty well-sculpted figure, packing a decent amount of personality into his standard pose, with his non-cane hand molded such that it's easy to imagine bolts of Force lightning flying from it. And, of course, it's the Emperor, the grand Big Bad of the saga, and that earns him some points. He certainly presided over plenty of Luke/Vader battles in my house, tossing in some Force lightning when appropriate. 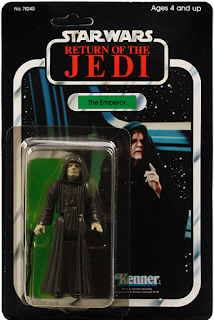 Austin's Analysis
Any wave of figures released in the wake of the line's first expansive & well-made Return of the Jedi offerings was going to suffer by comparison, but this wave does itself no favors by being so limited in scope. Only two notable heroes, only two troop builders (both of which are pretty C-list in terms of troop builders), and no droids. Apparently all the Jabba's Palace aliens were put in the first wave, leaving Prune Face (technically a member of the Rebellion) as this wave's sole non-Ewok alien figure. And while Wicket will quickly become the breakout Ewok and, arguably, the standard bearer for post-Jedi Star Wars stories for at least a few years, at this point he's still just another Ewok amongst four others. Even the presence of the Emperor - who is certainly an important character, but not the most dynamics of figures - does little to raise the profile of this wave. The end result is a batch of figures that, while they certainly vary from figure to figure in terms of sculpting & playability (with some figures continuing to showcase the previous line's improvements in both), as a whole, feel less like a cohesive, fully-thought-out wave of figures, than an assortment of dregs that were late to the party.
Newer Post Older Post Home
Posted by Austin Gorton at 12:00 PM