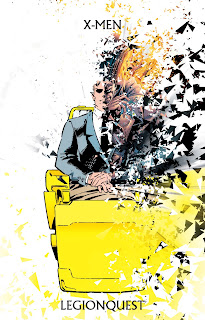 Well, this is it. The month the X-books are all cancelled. Yep, this is the month Marvel decided to put out to pasture all eight of the books in their bestselling line, including one that was only four issues old after a months-long promotional push. So long, X-Men!

At least, that was what the early marketing for "Age of Apocalypse" would have had us believe, even if self-described Dumb About These Things Teenage Me was smart enough to know Marvel wouldn't *really* be cancelling my beloved X-books. But while an outright cancellation was marketing mumbo-jumbo, this upcoming months' worth of books does mark an ending of sorts for all the series, as they will be replaced after this by alternate reality books for four months. And the creators, to their credit, make the most of the "fake ending" device to "end" the series with a variety of different bangs, from declarations of love to shocking reveals to one hardcore lobotomy.

Nicieza continues to do good work showing off the quieter side of X-Force; points off for some so-so art and questionable therapy.

A toss-up: Cable #19 is a better conclusion to its three part story, but Excalibur #85 is concluding a better overall story, though both stories are not without their faults (repetition for Cable, pacing for Excalibur).

Not a bad comic, but not a good X-Factor story, which finds the US government-sponsored mutant team fighting space aliens in Asia.

Last place with a bullet as Wolverine battles a resurrected Ogun with little explanation and plenty of artistic swipes, while Ghost Rider "guest stars" by mostly standing around.
Newer Post Older Post Home
Posted by Austin Gorton at 12:00 PM