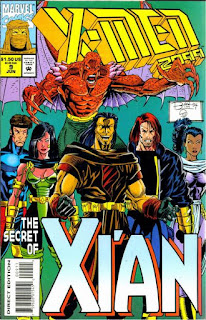 In a Nutshell
Xi'an battles Zhao!

Plot
The X-Men arrive on Zhao's ranch, called there by Krystalin, who emerges from inside, along with Victor Ten Eagles; both are acting strangely. When the X-Men press her on it, Zhao emerges, declaring that she is one of his X-Men now, as they all will be, whether they like it or not. When the X-Men resist, they are attacked and captured by the brainwashed Krystalin & Zhao's X-Men. Elsewhere, Bloodhawk meets an old friend named Liebowitz who asks him to look into some aggressive developers operating in the Savage Land. Back at Zhao's ranch, Zhao prepares to insert a chip into each of the X-Men that will make them subservient to him. In Texas, a newly-manifested mutant is on the run, but is offered sanctuary by a mysterious figure. Back at the ranch, Xi'an attempts to use his disintegration power to free himself, but Zhao strikes first, entering his mind in order to activate the chip. In Xi'an's mindscape, he battles Zhao, but is overcome, until the manifestation of his dark side appears and offers to help. Reluctantly, Xi'an merges with his dark side, enabling him to overpower & defeat Zhao. In the real world, Xi'an breaks free of his restraints, and when Cerebra asks if he's alright, he grins evilly and replies he's never been better.