Firsts and Other Notables
The X-Men animated series has had a heavy influence on this toy line already, but arguably that influence is never greater than here, when Toy Biz releases an entire wave of figures built around the animated series' adaptation of the "Phoenix Saga". As a result, we get the first Jean Grey figure (in the guise of Phoenix), the third female figure to be released (after Storm & Rogue), and the last of the original five X-Men to receive a figure. 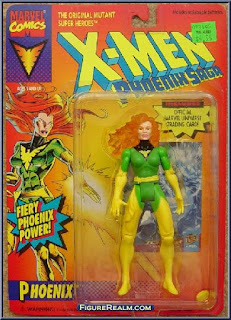 Corsair joins his Starjammer colleagues Raza & Ch'od, giving us a near-complete lineup of Starjammers (lacking only Hepzibah and, arguably, Sikorsky).

These figures came packaged in their initial release with a card from the first series of Fleer Ultra X-Men trading cards.

In the X-Force lines, we get our fifth and sixth iterations of Cable; the latter is based on the character's appearance in Wolverine #85, and once the mammoth gun is removed, makes for a pretty decent Steve Skroce-era Cable (the fifth Cable figure is an aquatic variant that, as far as I know, has no direct comic book inspiration).

The fourth series of X-Force figures is heavily influenced by the first Deadpool miniseries, with Tree Black Tom, Commcast & Slayback all being pulled from its pages.

The smaller fifth series of X-Force fills in some more Brotherhood of Evil Mutants/Freedom Force villains, along with giving Exodus his own figure (which probably belongs in an X-Men wave at this point - he's fought X-Force only briefer, and as a prelude to the bigger Cable/Magneto fight), but I'm not sure what distinction is being made anymore between the various X-Men/X-Force series. 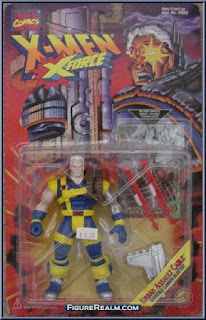 Thanks to Raving Toy Maniacs, Figure Realm, and Cool Toy Review for the pics.

Of Their Time
The sensational character find of 1993, Adam-X (the X-TREME!!!) receives his own action figure. 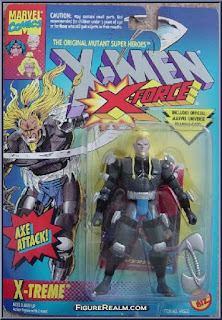 Killspree, a renamed Killjoy (killing sprees apparently being more kid-friendly than killjoys, a word which actually exists independent of any homicidal connotations), of the late, unlamented Weapon: Prime, receives his own figure, which is perhaps the most 90s thing ever (though Commcast & Slayback figures have a case to be made). 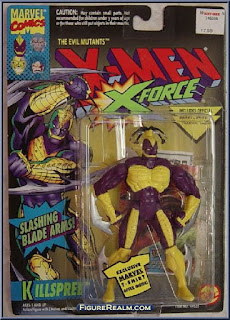 As much as I would have loved an "WWII veteran" version of Crimson Commando, it is, of course, the more current cyborg version of the character who receives an action figure. 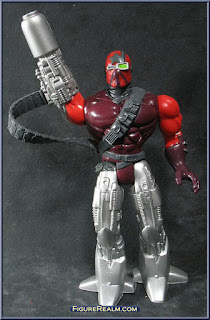 It's great having the X-Men's original female character in the line, and it's all the better than this figure features a great sculpt and solid playability. 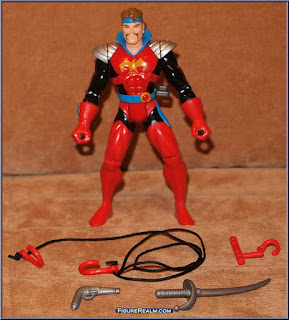 Nothing too ground-breaking here, but a cartoon-accurate sculpt that captures the fun playability of a space pirate isn't a bad thing. 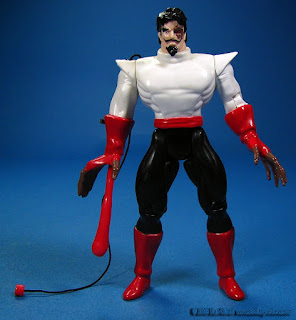 As much as I may have preferred a classic shillelagh-wielding version of the character, this is a well-sculpted figure with a slick, minimalist but comics-accurate design, enough so to even balance out the annoying "energy blast tied to the character by a string" action feature. 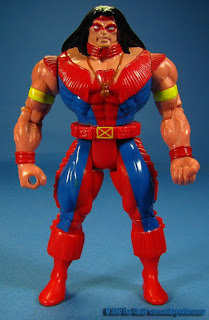 The original Warpath figure came out when the line was still offering relatively slight figures; this update is a mammoth hunk of plastic that serves the character well. 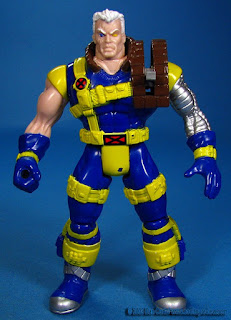 The enormous springloaded gun is the 90s at its comical best; the ability to remove it and be left with a relatively comics-accurate Cable is even better.

Austin's Analysis
In many ways, the "Phoenix Saga" series represents the zenith of the Toy Biz action figure line, the point at which the blisteringly-popular cartoon fully intersects with the toy line for a bit of 90s-style corporate synergy. But it also helps that the figures are pretty good, buoyed by a spectacular and much-appreciated Phoenix figure that captures the essence & raw power of the character. The only dud of the bunch is the obligatory Wolverine figure which, as obligatory Wolverine figures goes, isn't terrible (it beats "Underwater Cable" for sure). Warstar probably isn't the most popular or notable Imperial Guard member to celebrate in plastic, but in terms of pure playability, two alien robots for the price of one is a pretty decent rationale for inclusion, while the Corsair & Gladiator figures are both well-sculpted representations of important, long-standing supporting characters.

The two X-Force series, meanwhile, continue to showcase the evolving high level of craft involved in the line. History may not care all that much about "Killspree", Slayback & Commcast, but they are really well made figures, continuing to strike the right balance between sculpting & playability which the line seemed to find in the previous wave of figures. In Avalanche we get another classic X-villain, in Exodus, a significant (if fleetingly so) one, and one of the line's best renditions of Cable. It's easy (and fun!) to mock some of the character inclusions here, but to Toy Biz' credit, they're not treating the characters like the jokes they will later become, providing even what will prove to be also-ran characters the same level of craft & playbility as the more "classic" evergreen characters.
Newer Post Older Post Home
Posted by Austin Gorton at 12:00 PM