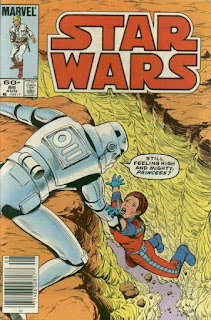 In a Nutshell
Leia encounters a Stormtrooper from Alderaan.

Plot
Over Luke's objections, Leia travels alone to the planet Yinchor, hoping to sway the local Yinchorri to the side of the Rebellion. Once on the planet, however, she learns the Yinchorri have betrayed her to the Empire, a result of the Empire having kidnapped the local Yinchorri ruling body. Her shuttle targeted by a pair of TIE fighters, Leia manages to destroy one and ground the other, but her ship crashes as well, with Leia managing to activate her emergency beacon before going down. As Luke, Lando & Chewbacca take off in the Falcon to rescue Leia, she discovers the pilot of the TIE fighter survived as well, and is a fellow survivor of Alderaan. Though Leia is appalled he would still be serving the Empire after they destroyed their homeworld, the two work together to stay alive in the desert wastes of the planet. Sensing conflict in him, Leia offers the Stormtrooper a place in the Rebellion, but he declines, unwilling to upend his life for a dream that may never come true. But when the local Imperial governor catches up to the pair and orders the summary execution of the Yinchorri leadership followed by Leia, the Stormtrooper is appalled by the governor's cruelty. Just then, the Falcon arrives, and both Leia and the Stormtrooper attempt to escape on the ship, but the Stormtrooper takes a shot intended for Leia, saving her but preventing him from getting aboard as the Falcon flies off, leaving Luke & Lando to pull a heartbroken Leia inside.

Firsts and Other Notables
A fill-in/inventory story, this issue is the first professional work of writer Randy Stradley, who would go on to become the VP of Dark Horse Comics, for which he will write additional Star Wars stories after that publisher acquires the comics license in the 90s, becoming the editor of the line during its post-Attack of the Clones reshuffling, and serving in that capacity until Dark Horse lost the license in 2014.

Not surprisingly, the planet and its reptilian species introduced in this issue, Yinchor and the Yinchorri, would appear again in later Dark Horse stories (usually written by Stradley), with the Yinchorri notably serving as the antagonists of the Jedi Council: Acts of War miniseries, and Yinchor (later spelled Yinchorr) serving as the site of the Imperial training facility for the Emperor's Royal Guards in the Crimson Empire series (all of which, of course, was later deemed non-canonical Legends after Marvel re-acquired the license).

Stradley was apparently asked by editor Ann Nocenti to contribute an additional story to this series featuring the Hoojibs, but since he couldn't come up with an exciting story about "telepathic bunnies", this issue stands as his only Marvel work.

A footnote at the start of the issue explcitly states it takes place before Return of the Jedi.

Um, Actually
The Alderaanian stormtrooper was flying one of the TIE fighters chasing the Yinchori shuttle, but Stormtroopers don’t fly TIEs; there are specific pilots with different gear that do so. 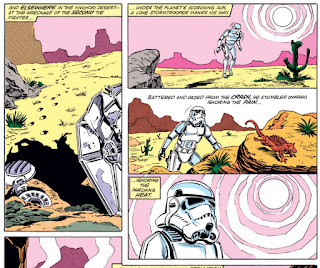 Austin's Analysis
Yet another fill-in/inventory issue (our third in six months), this one is dependent on the Rebellion/Empire dynamic to work that no amount of narrative captions can smooth over the fact that it takes place before Return of the Jedi, and thus it admits as much on the opening pages. Fortunately, of the recent spate of unfortunately-timed fill-in issues, this is the best of that lot. The destruction of Alderaan is something that doesn't nearly get enough examination (something that's been true of all Star Wars fiction for a long time), probably because the destruction of an entire planet is an act so horrendous it's difficult to even fully comprehend what experiencing that would be like. But there are ways to use it effectively, and this story is one example of that, as Leia comes face-to-face with a fellow Alderaanian survivor on the other side of the galactic conflict, and is flabbergasted to discover he still stands by the Empire despite what happened to their homeworld.

It's an interesting conflict to explore, and this issue does a decent job of it (in part by couching the Rebel/Imperial conflict in a class conflict as well, making it easier for the Stormtrooper to accept Imperial propaganda that is was the high-falutin' Bail Organa who forced the Empire's hand), even while the topic is vastly more complicated than a single-issue story could possibly handle. And the resolution - that the Stormtrooper ultimately sees the error of the Empire's ways - feels particularly forced (the destruction of an entire planet he can comfortably rationalize, but an Imperial governor deciding to summarily execute the most famous Rebel leader is a bridge too far?). But the issue gets points for at least trying to tackle an interesting concept, and use one of the most significant events in Star Wars history as the springboard for it, which is more than the vast majority of fill-ins - certainly moreso than other recent ones - have aspired to do.

Next Issue
Luke - and the main narrative arc of the series - returns!