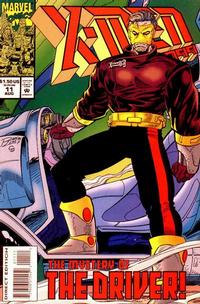 In a Nutshell
Junkpile returns!

Plot
His business concluded, Xi'an tells Fitz they're leaving the roadhouse, and Luna decides to tag along. Shortly thereafter, Brimstone Love appears at the roadhouse, looking for Luna. At Zhao's complex, Meanstreak rages about Xi'an abandoning the team, while Victor Ten Eagles decides to return to Santa Fe. In the desert, Frostbite is picked up by the Driver. Meanwhile, Xi'an, Fitz & Luna arrive at a black market in El Paso, where Xi'an meets with Haiku as a shadowy figure watches Fitz & Luna. Elsewhere, the Driver uploads Frostbite into his database. Back at the market, Fitz tells Luna he can tell she's hiding something from him, and she reveals that she had plans to meet Junkpile in El Paso, prompting him to emerge from the shadows. Fitz immediately attacks him, but Luna intervenes, telling both of them fighting makes no sense if they're all going to work together.