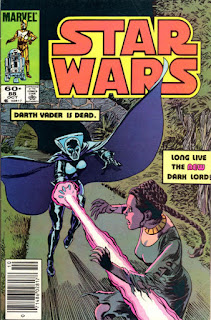 In a Nutshell
The first appearance of Lumiya

Plot
Princess Leia & Mon Mothma visit Herdessa, in the hopes of enticing the world to join the Alliance of Free Planets. At a reception, Leia is pelted with mud by disaffected citizens, and the ruling Herdessan Guild sets their cyborg head of security, Lumiya, after the culprits. But with diplomatic talks stalling, Leia goes for a walk, and sees Lumiya arrest Suzu, the woman who threw the mud. When Suzu claims she & her partner Finn will now be executed by the Guild as an example, Leia intervenes, helping Suzu escape. Leia is taken to a hideout where Suzu explains that anyone not affiliated with the Guild suffers and risks being sold into slavery, at which point Lumiya & her security forces attack the hideout. Most of the rebels are captured, but Leia escapes, just as the Guild captures the rest of the Alliance delegation, intending to sell them into slavery and revealing they've allied with the Imperial remnant. As Stormtroopers arrive on the planet, Leia rallies the suffering middle class, who rise up and attack the Guild, while Leia manages to injure Lumiya, forcing her out of the fight. With the Guild overthrown, Mon Mothma & Leia take their leave, needing to warn the Alliance that the Empire is operating at an increased capacity. Before she leaves, Leia warns Suzu & Finn to watch out for the still-at-large Lumiya, while Lumiya, watching from a distance, says that Leia will soon learn how dangerous she really is.

Firsts and Other Notables
This is the first appearance of Lumiya, who will later be given the title "Dark Lady of the Sith" and revealed to be former Rebel pilot/Imperial spy Shira Brie (though the Shira reveal doesn't occur until Lumiya's first appearance in issue #96, the Marvel promotional series Marvel Age announced the connection between the characters while promoting this issue). She will return in issue #95 and essentially serve as the series' post-Jedi Big Bad, and much later, be revived in the Expanded Universe in the "Legacy of the Jedi" series of novels, in which she orchestrates the fall of Jacen Solo and his transformation into a Sith Lord.

This issue also establishes that the post-Jedi name for the Rebel Alliance or the "Alliance to Restore the Republic" is "The Alliance of Free Planets".

Leia spots Stormtroopers amongst the planetary forces on Herdessaa, prompting her and Mon Mothma to realize that remaining Imperial forces are trying to bolster themselves by allying with oppressive local governments. 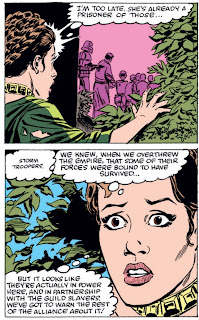 Mon Mothma is referred to as Leader Mothma, calling to mind “Leader Snoke” from the Sequel trilogy.

Similarly, one of the rebels on Herdessa is named Finn.

A Work in Progress
Leia is not eager to spend any time with Zeltrons, citing her recent experiences with Dani. 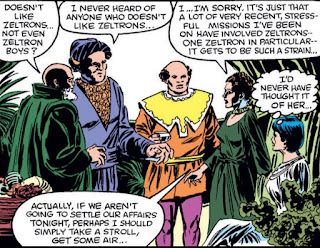 Austin's Analysis
Sometimes, the done-in-one stories told in this series can be frustratingly-fast paced,with massive planet-wide societal & political changes being wrought in the span of a few pages. On the surface, this is one of those stories, with Leia almost singlehandedly overthrowing an entrenched system of slavery by the end of the issue. But at the same time, this is exactly the kind of story Leia should be starring in, and the speed with which she gets results is a testament to her particular set of skills and the strength of her characterization.

Meanwhile, the exploration of Leia's difficulties transitioning from "Rebel Warrior" to "Galactic Diplomat" is an interesting angle that takes advantage of the post-Jedi status quo, and the introduction of Lumiya will ultimately prove to be the introduction of something the series is lacking: a new post-Imperial Big Bad (that said Big Bad will have personal connections to the main characters & the series' history is all the better). It remains disappointing how scattered the main cast remains (it's been some seven issues since Return of the Jedi happened, and the main trio has been pretty much scattered apart from one another for the majority of those issues), but an issue showcasing how much Leia kicks ass and can accomplish just on the strength of her skills & personality is never a bad thing.

Next Issue
The fill-ins return as Luke takes center stage!