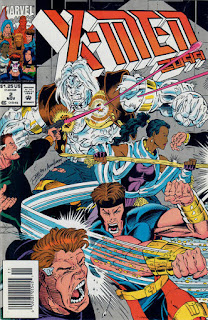 In a Nutshell
Xi'an's condition worsens as the X-Men search for evidence he was framed for Synge's death.

Plot
Xi'an's X-Men race away from Nuevo Sol, pursued by the Synge Casino enforcers. They receive an unexpected assist from Bloodhawk, who helps fight off the enforcers and takes the X-Men to a secure location, saying his debt to Xi'an for freeing him from Synge is complete. Back at Nuevo Sol, Lytton Synge admonishes Junkpile for the botched assassination of Xi'an, ordering him to finish the job. Later, a drunk Desdemona crashes her father's memorial service, reminding Lytton she now owns equal shares in the casino. Elsewhere, with the injured Xi'an mysteriously being covered by a cocoon-like red carapace, the X-Men split up, with Meanstreak, Krystalin & Metalhead heading to Synge's casino in order to find evidence that Xi'an was framed for Synge's murder. After they leave, Junkpile tracks down the remaining X-Men guard Xi'an. At the casino, Meanstreak & Metalhead are captured by the Rat Pack, while Junkpile makes short work of Cerebra, Tim and Tina, only to discover Xi'an fully encased in his cocoon.

What to read the rest? Become a patron via Patreon!
Newer Post Older Post Home
Posted by Austin Gorton at 12:00 PM