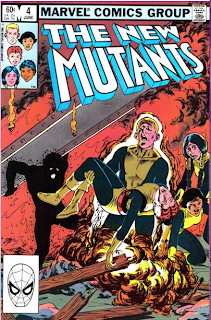 In a Nutshell
The New Mutants help track down someone who is stalking Stevie Hunter.

Plot
At her studio, Stevie and Karma discuss the disturbing phone calls Stevie has been receiving, and the fact that police are unable to help her. At the mansion, Professor X calls a meeting of the New Mutants and tells them that though he gathered them under the influence of the Brood, they all have a place at the school and he'd like them to stay. They agree, and then Karma tells Xavier about Stevie's situation. He agrees to let the New Mutants investigate so long as they submit their plan to him for approval. At Stevie's apartment, they trace one of the phone calls to a nearby phone booth, and Rahne is able to track the scent to the local high school. With Sam and Rahne keeping watch, the rest of the team goes inside to flush out the culprit. When one of the boys sees Stevie, Rahne senses his surprise and fear, and through their rapport, points him out to Dani.

The boy, Peter Bristow, one of Stevie's students, races off, and the New Mutants give chase. They follow his car to a construction site, where a fire breaks out. Karma takes possession of Peter while Roberto puts out the fire. At Stevie's apartment, Dani uses her power and learns that Peter has a crush on Stevie, but because he's been abused by his father, he thinks he needs to hurt Stevie to show her he loves her. Professor Xavier arrives and the authorities take Peter into foster care, with Xavier promising to help with his therapy. He's pleased with the good the New Mutants have done, but says he still wants a report on how their performance could be improved by tomorrow's class.

Firsts and Other Notables
Bob McLeod steps down as the regular penciler as of this issue, with long time Marvel artist Sal Buscema coming aboard. McLeod stays on as the inker, and the transition is relatively seamless, with the art in this issue looking not all that different from the previous three issues.

This is technically the first issue of the series in which Professor X appears free of the Brood's influence, and he openly acknowledges that he was subsconsciously guided to form the team in order to gather future hosts for the Brood, which puts a unique spin on the New Mutants origins, making them one of the few teams to have their origin rooted in becoming hosts for a parasitic alien race. 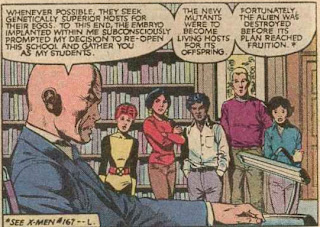 A Work in Progress
Sam continues to struggle with turning while blasting, though he manages to at least turn up, to his great satisfaction.

The "mixer" the New Mutants end up at in this issue is the same one the local kids invited them to in issue #2, though Dani mentions their standing invitation despite not being at the mall when it was made. 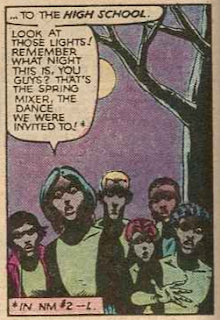 It's established that Sam's invulnerability while blasting extends to whomever he's carrying, and that Karma can't move as quickly when she's possessing someone.

Rahne mentions desiring to stay as a wolf. 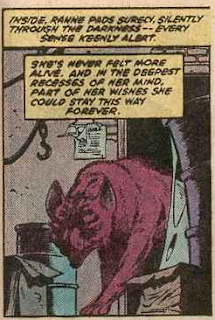 While out in public, Lilandra is seen wearing a turban to hide her feather-hair. 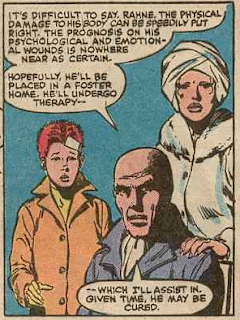 I Love the 80s
Not that this issue is trying to present itself as a deep mystery, but I'm sure you were shocked to discover the new character we'd never seen before until page 2 of this story turned out to be the culprit. 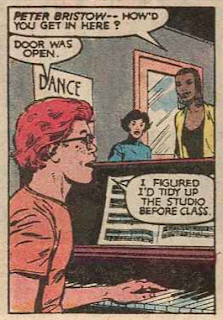 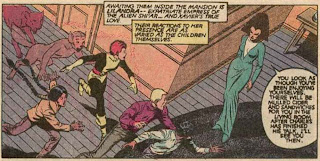 Professor X notes that the New Mutants have been raised in a more rebellious age than the X-Men.

He also helps Bobby build the device that would enable the "*69" capability on phones. 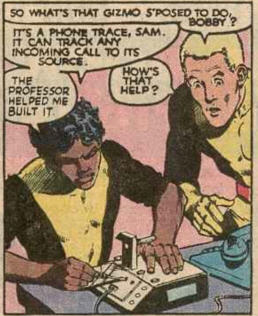 Sam says he once tried to dance "like that Travolta fellow". 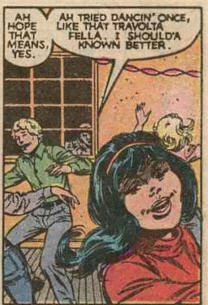 Claremontisms
As a wolf, Rahne sees the world as "patterns of energy". 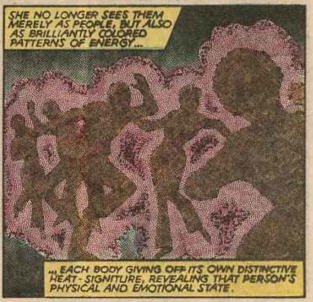 "Professor Xavier is a Jerk!"
Professor X is back to his old tricks, wiping memories of the New Mutants' involvement. 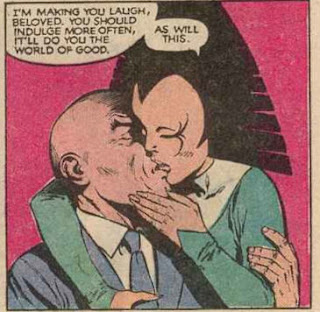 My Hero, Thomas Magnum
Roberto insists his idea to go into the dance and flush out Stevie's stalker will work because it worked for Magnum. 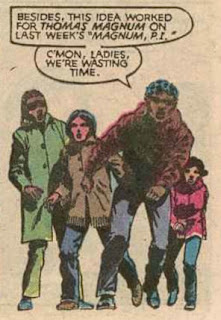 Bob McLeod on stepping down as New Mutants penciller
"This was my first regular penciling assignment, and I wasn't prepared to knock out the pages as fast as I had to. That's what led me to deciding to leave penciling it after the third issue. I wasn't happy with the quality of my work. I needed more time to do good work."

Teebore's Take
While not reaching for the same heights as "God Loves, Man Kills", this issue shares some of that story's pretensions, serving, essentially, as an after school special on the subject of child abuse. What really saves the story is the strong character work Claremont puts into the New Mutants. Dani's angst is well established at this point, but we get our first sense of Karma's character, as she is the one most adamant to help Stevie and steps up in a leadership role. Later, Sam's joy at being able to turn while blasting and "finally doing something right" is palpable. Claremont also undercuts some of the pretension with some genuinely humorous moments, such as Sam and Rahne, on the lookout, watching while their teammates essentially go to a high school dance while they're left out in the cold. The end result is a fairly forgettable one-off story, but one that does a nice job of continuing the exploration of the book's still-new stars.