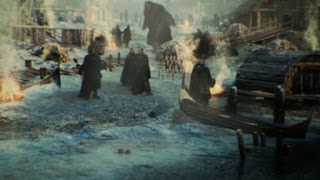 War's shadow has always loomed over the Game of Throne series. We've seen plenty of war already but it certainly isn't over. All over preparations for further wars are being made. We even end up seeing the first battle of, most likely, the most important war that will be fought.

Braavos
Arya is still training for her war against...bad people? She's playing “the game” with Jaqen. Arya is describing her life as an oyster salesperson. Her only flub is describing the street turns down. Even though Jaqen knows all this is a lie so, I don't know, I guess he can just tell what is a good lie and what isn't?

Anyway, Jaqen recommends Arya turns a different direction next time. Arya does and comes across one of the most evil kinds of people in the world, insurance salesmen! Basically, he sells life insurance to sailors. He vows to pay the sailor's family if said sailor doesn't survive a journey.

Arya returns to Jaqen who explains that this insurance salesmen doesn't always pay out to the families when a sailor dies. This just makes him a bad insurance salesmen. Insurance is like a casino, if you are doing things right you don't have to cheat.

Regardless of this man's ability as an insurer, Jaqen thinks he must die. He wants Arya to learn everything about the man and, with that, Arya is off. The other girl at the House of Black and White is worried about Arya. Jaqen isn't and I believe he thinks that, regardless of if Arya succeeds or fails, SOMEONE is going to die and that's enough to keep the Many Faced God happy.

Anyway, a sparrow tries to get Cersei to confess but she won't. Cersei firsts threatens the woman then tries to bargain with her and then threatens her again. None of it works.

Qyburn visits Cersei and gives us some valuable exposition. First, Tommen is so upset he'll barely eat and won't leave his room. Secondly, Grand Maester Pycelle is now in charge of the small council and has convinced Kevan Lannister to become Hand of the King. Unfortunately for Cersei, Kevan doesn't appear to give two shits about Cersei. Also, if Cersei doesn't confess (her easiest way out) she will face a trial for incest and the murder of Robert Baratheon. Oyburn is concerned about how much proof the High Sparrow really needs but, regardless, Cersei certainly isn't going to confess.

Meereen
Jorah and Tyrion are standing before Daenerys. Daenerys asks Tyrion the typical questions like why she shouldn't kill him right there. Tyrion replies by saying that she hates the Lannisters and he's good at killing them.

Daenerys then asks why he would be a good adviser and Tyrion responds that he doesn't even know if he WANTS to be her adviser. This all leads to Daenerys asking Tyrion what to do about Jorah. Tyrion says that killing people who are loyal to you is a sure way to get people to stop being loyal to you. But, not following through on your promises isn't strong leadership either. The solution? Exile...again.

Tyrion and Daenerys share a drink discussing their terrible fathers and, what else, war. After some bonding Daenerys agrees to take on Tyrion as an adviser. His first advice is not to try and rule Westeros. It ain't worth it. Sound advice but Daenerys doesn't care. She wants the iron throne. So Tyrion's second piece of advice is to get the support of a powerful house. Daenerys wants to destroy them all instead. Tyrion is 0 for 2. Hopefully Daenerys starts listening to Tyrion soon.

Meanwhile, Jorah walked back to his former slave master. He wants back in the fighting pits. I'm not sure what he's up to.

The Wall
Sam is hurt and worried about Gilly's safety. Young Olly comes in to talk to Sam. He's confused about Jon Snow trying to gain the Wildlings as allies. They did slaughter his family after all.

Sam says without the Wildlings' help they're all screwed. Sometimes people have to do what they think is for the greater good even if a lot of other people think it's wrong. Olly seems to agree but the wheels in his head are turning. I'm not sure I'm going to like the plan he's evolving.

Winterfell
Sansa berates Theon/Reek for not helping her and for him being an all-around horrible person. After accusing him multiple times of killing her brothers Theon/Reek finally spits out that Sansa's brothers are alive. I'm sure this is good news for Sansa to hear but I'm not sure how useful this information will be for her.

Ramsay and Roose Bolton are discussing, what else, war. They go over the strategies for battling Stannis Baratheon. Roose's plan is to wait Stannis out inside the walls of Winterfell. Ramsay doesn't like it. He, of course, wants to take the fight directly to Stannis. All he needs is 20 good men because, naturally, rulers always go out on small, covert operations.

North of the Wall
Jon Snow is sailing to a stronghold known as Hardhome to gather Wildings for help in the upcoming war against the white walkers. He and Tormund arrive and the Lord of Bones greets them. The Lord of Bones refuses to trust Jon Snow and thus gets beaten to death by Tormund for his objections. You can even hear him faintly say “I have this bad ass skull mask. I was supposed to be the boss of this level!” as the breath leaves his body.

Tormund and Jon Snow meet with the council of elders (which awesomely includes a giant). Jon Snow says they'll all need to band together to fight the white walkers. He even gives them some dragon glass and explains that it's the white walker's weakness. Some agree to Jon Snow's offer. Others do not. One person on the side of Jon Snow is a woman named Karsi.

While loading those Wildings who agreed to go south of the Wall onto boats, Karsi ominously says good bye to her children promising to see them soon after she gets everyone else on the boats. Yeah, we know where this is heading. As the boats are leaving a rumbling occurs. Pretty soon Hardhome is besieged by animated dead bodies known as “wrights.”

There are a lot of wrights. Jon Snow and the Night's Watch that came with him join in the fight and try and help with the Wildlings but they are all getting overwhelmed. Karsi is holding her own but she is, at the end of the day, a woman. So of course her maternal instincts become her kryptonite when she comes face to face with child wrights. Her crazy, womanly emotions won't even let her attempt to fight as the dead children swarm and kill her.

Eventually the Wildings, Night's Watch and a giant all retreat. While sailing Jon Snow looks back. Hardhome is toast. The White Walker King stares at Jon Snow and performs his level 30 raise dead spell. Amongst the raised dead is...Karsi! Which, actually, means absolutely nothing.

Other Thoughts
I cannot overstate the meaninglessness of ending the episode on a shot of the reanimated Karsi.

My immediate reaction was that it was kind of a dick move for Tyrion to suggest exiling Jorah. However, I quickly remembered that Jorah knocked Tyrion unconscious, kidnapped him, nearly got him infected with gray scale and ended up being responsible for Tyrion being sold into slavery. Tyrion has nothing to be loyal to Jorah about.

Speaking of gray scale, I have no idea where things are headed with Jorah.

Did Arya legitimately forget the actual name of the road she turns down or is the point of the game to try and slip a lie into your story and see if Jaqen notices.

Also, had Arya already adopted this persona before playing the game or was this a test to see if she could adopt the persona?

I'm really not a fan of the Theon/Reek plot but I do find it interesting that part of the reason he was able to be brainwashed is because of the guilt he feels about his actions.

I really want Ramsay to be wrong and for his plan to fail. I doubt it will, though.

If I had to hazard a guess, I'd say Ramsay sneaks around Stannis' camp and does something like poison their water supply Kefka-style. With Stannis' army decimated, Stannis will be forced to sacrifice his daughter to have any hopes of defeating the Boltons.

I think young Ollie is plotting to kill Jon Snow. Sometimes you have to do something you think is right even if everyone else thinks it's wrong...

They should send the gray scale infected people to fight the wrights and white walkers.

Where did Jon Snow get all that dragon glass?

I was a little confused about the geography of Hardhome during the attack.

I figured the giant was a goner for sure if only to save on the special effects budget.

I would not have expected it, but I could watch an entire season worth of Tyrion and Daenerys talking to each other.

Daenerys: Why did you travel to the far side of the world to meet someone terrible?
Tyrion: To see if you're the right kind of terrible.
Daenerys: Which kind is that?
Tyrion: The kind that prevents your people from being even more so.

Tyrion: My own sister married someone she loathed as well. Though, not by choice and certainly not for the greater good, gods forbid. She ended up having him killed.
Daenerys: Perhaps it won't come to that.