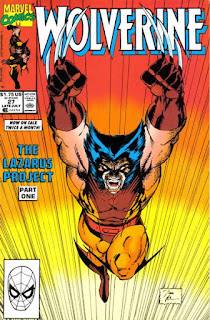 In a Nutshell
Wolverine is drawn into the Lazarus Project.

Plot
In Lowtown, Wolverine and Tyger Tiger fight a group of street toughs, aided by Karma, then retire to the Princess Bar, where Wolverine learns that Prince Baran has hired Jessica Drew as his bodyguard. Meanwhile, on the island of Rumika, a group of villagers are given custody of the Master Form. Meanwhile, Andover discusses the Master Form, key to the Lazarus Project, with his business partners, General Coy and Prince Baran, as Jessica patrols the palace. She overhears a scientist named Page discussing an attack on Rumika, and Page orders a massive robot named Pinocchio to attack Jessica. Later, Wolverine finds a badly beaten Jessica in the streets, and sends both her and Lindsay McCabe back to America for their own safety. Investigating the palace himself, Wolverine discovers Page and is attacked by Pinocchio, who proves resistant to his claws. When Page tosses a beaker of chemicals in Wolverine's face, he dives in pain out of the palace, eventually staggering off the docks and into the ocean.

Firsts and Other Notables
Though he'll returns for the Bloody Choices annual, this is John Buscema's last contribution to the regular series he helped launch.

Similarly, Jessica Drew and Lindsay McCabe exit the series with this issue. While the former, after taking a few years off, will pop up elsewhere in the Marvel Universe (including a stint as a fairly significant member of the Avengers under Brian Michael Bendis), this is pretty much the last hurrah for Lindsay McCabe, who makes one more appearance after this issue (along with Jessica), in the backup story of a Spider-Man annual in the mid 90s. 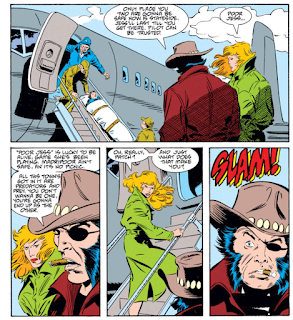 This issue introduces a handful of characters that will feature in the subsequent story: Andover and Dr. Page, who work for the Lazarus Project, and Pinocchio, a robotic agent of Dr. Page's.

Another Jim Lee cover to this issue, a particularly iconic one, thanks to the central image being used by Marvel in a lot of their licensing material moving forward.

A Work in Progress
Wolverine is still using the Patch identity in Madripoor, and it's suggested that the general populace is still unaware of true identity. 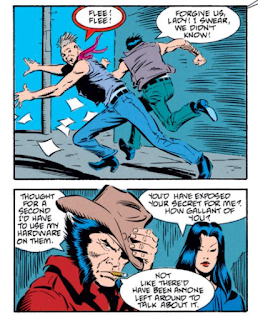 Readers are reminded in this issue that Karma is only working for her uncle in exchange for his help locating her missing twin siblings.

Teebore's Take
As with the previous summer's "Gehenna Stone Affair", the series marks the transition into twice-monthly shipping with the launch of another multi-part storyline, the four part "Lazarus Project". In execution, however, this reads very much like an early Claremont-penned issue of the series (which isn't a bad thing), helped of course by John Buscema's last contribution to the title he helped launch. As much as this issue kicks off the new storyline, it's really more concerned with getting readers up to speed with the status quo of the supporting cast, which have been mostly pushed aside in the wake of the Goodwin/Byrne run and subsequent fill-ins. So we get refreshers on the Tyger Tiger/General Coy detente, the return of Karma (and a reminder of her whole reason for being in the book), and a sendoff for Jessica Drew and Lindsay McCabe. It remains to be seen how the story will unfold, especially with an artistic change looming, but for now, this reads like business as usual, which is a refreshing change of pace for the series.