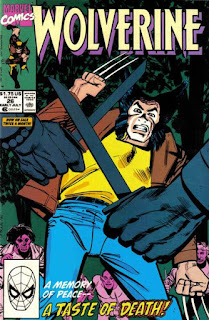 In a Nutshell
Wolverine avenges an old friend.

Plot
Outside the home of Bando Saburo, Wolverine battles a gang of street punks who killed the servants inside. Later, he plays poker with Gene Claymore, one of Madripoor's wealthiest citizens. As he plays, Wolverine recalls staying with Bando, and Bando showing him a beautiful glazed bowl, the family's most prized possession, and telling him that Bando has named his nephew Masaki, troubled by his father's poverty, his heir. In the present, Wolverine is besting Claymore thanks to his animal senses, raising the stakes with each win. In the end, he wins everything Claymore owns, but tells him all he wants is Bando's bowl, along with the name and location of the person Claymore got it from. 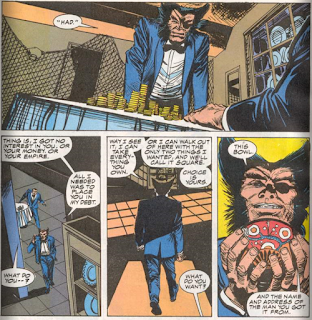 Claymore tells him it was Masaki, then rushes Wolverine, who trips Claymore and sends him crashing out a window to his death. Wolverine goes to Masaki's home and finds him preparing for ritual suicide, though Wolverine doubts he has the guts to go through with it. He tells Masaki he needn't have killed Bando for the bowl; Bando had cancer, and would have died soon anyway, and the bowl would have been Masaki's. Masaki attacks Wolverine, and Wolverine kills Masaki. Later, Wolverine leaves the bowl on Bando's grave, thanking him for giving Wolverine a memory of peace and beauty he'll carry with him as he walks the road to hell.

Firsts and Other Notables
The character at the center of this issue, Bando, a man who helped teach Wolverine some semblance of peace in his pre-adamantium days, is yet another old friend we've never heard of before and will never see or hear of again. 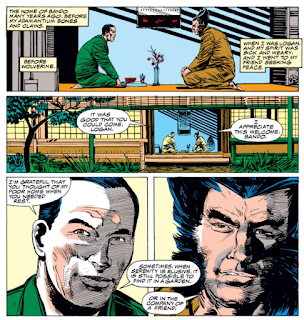 This kicks off Wolverine's return to bi-weekly shipping for the summer; unlike Uncanny X-Men, the series will do this again the following summer.

This issue contains a Wolverine pinup drawn by Todd McFarlane. 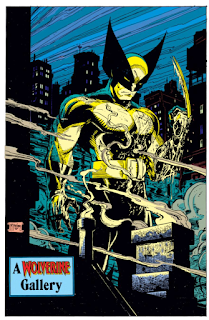 Creator Central
Klaus Janson, who finishes most of the issues John Byrne drew during his run on the series, pencils this issue, with long time Marvel inker Tom Palmer embellishing him.

A Work in Progress
Wolverine is clearly still operating as Patch, and spends much of the issue playing two hand poker, something you see often in fiction but which doesn't really work in real life (that is, poker between two people isn't terribly exciting). 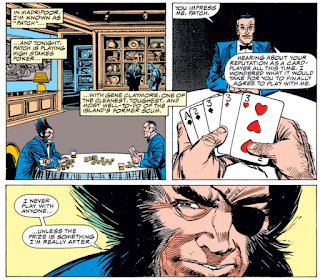 The Best There is at What He Does
Wolverine notes that while his body is healing, the injuries still hurt. 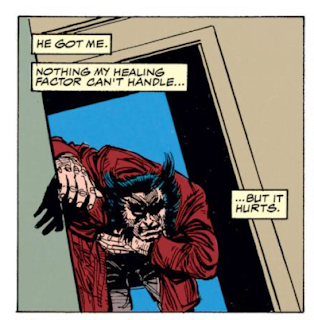 The Grim 'n' Gritty 90s
Wolverine runs afoul of some street punks who look like they shop at the same stores as Jubilee.

Teebore's Take
Another done-in-one, and for the second issue in a row the story has at is core Wolverine's relationship with a character we've never heard of before nor ever will again. Where last issue used that relationship as an excuse for a possibly apocryphal look at Wolverine's past, this one is much more of a fable/morality play, as Wolverine is essentially operating as an agent of justice/just desserts in memory of his friend.

It's a type of story that will become all too common for Wolverine done-in-ones, and while this particular one isn't the most exciting thing in the world (and the whole "here's another character who I totally have a strong connection with even though I've never mentioned him before" bit is already eye-rollingly cliche), it's perfectly cromulent. Duffy continues to display a solid grasp of Wolverine's voice, and it's always nice to see Tom Palmer's inks - here, he takes a bit of the rough edge off Janson's pencils, and the combination works. Ultimately, the biggest sin of this issue is being an entirely forgettable one that doesn't advance the character or the plot at all, but it's entertaining enough for what it is.