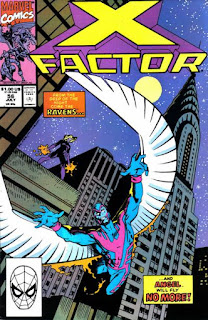 In a Nutshell
Crimson targets Archangel, hoping to use him to take the power of the Ravens for herself.

Plot
The Ravens meet Crimson at a Manhattan bar, where she tells them of the new sensation she's discovered, mutants, and of her plans to dominate one of them, Archangel. One of the Ravens, Azure, psychically attacks a nearby stock broker for investment tips, but leaves him alive, as his pain isn't to Azure's tastes. The rest of the Ravens insist Azure follow him to the hospital and finish him, lest he tells someone about the Ravens. Meanwhile, a halluncinating Archangel patrols the city, intervening in a battle betwen rival drug pushers that draws the attention of both Officer Jones and Trish Tilby and her news crew. Later, the rest of X-Factor returns to Ship after another fruitless night of searching for Archangel, and Beast is bothered by how Trish's report on his latest attack is presented. Just then, Marvel Girl returns to the team. At St. Vincent's Hospital, Azure attempts to kill the stockbroker, but he proves surprisingly strong, resisting Azure and calling for help, which draws the attention of a passing Archangel, who bursts into the room. 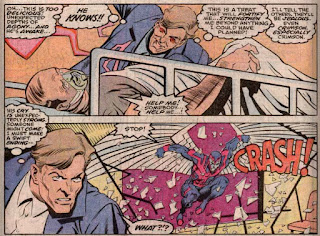 Azure tries to ensnare him, but Archangel's wings act of their own accord and slice off Azure's head, a death felt by all the remaining Ravens, including Crimson, who had hoped Archangel would kill Azure so she could replace Azure's strength with Archangel's. Alerted to the attack at the hospital, the rest of X-Factor head there, while Crimson confronts Archangel, telling him she can free him of his pain forever. At the hospital, Beast runs into Trish, and absconds with her to the roof, where he lays into her for her coverage of Archangel's attacks. Elsewhere, Officer Jones spots Crimson flying with a captive Archangel, and manages to fight her long enough that sun rises, forcing Crimson to flee without him. Crimson meets with the rest of the Ravens, realizing she's lost her chance to have Archangel for herself, but confidant that Officer Jones will be able to aid her in her plan, and that by tomorrow night, the rest of the Ravens will die.

Firsts and Other Notables
Still feeling the effects of Sabreooth's poisoned claws from issue #52, Archangel is continuing to hallucinate while "terrorizing" the city by attacking muggers and drug dealers, actions which draw a fair amount of discussion in this issue (Beast is angry Trish is presenting Archangel as dangerous when he's only attacking criminals, Officer Jones objects to his actions as a cop but doesn't mind him cleaning him the town as a person). 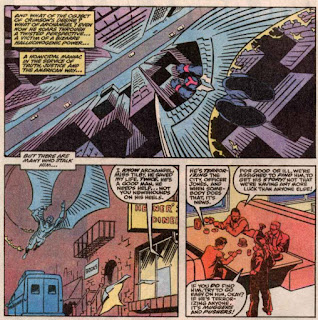 Jean returns this issue from her two issue adventure in Uncanny X-Men, though she and Beast (as well as Ship) will appear in X-Men #264. 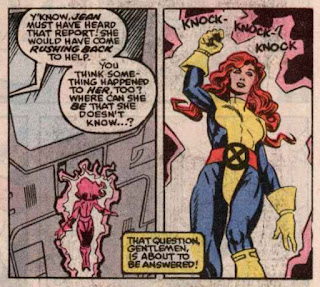 This issue introduces a bunch of new Ravens, who will feature in the story but don't ever appear again. 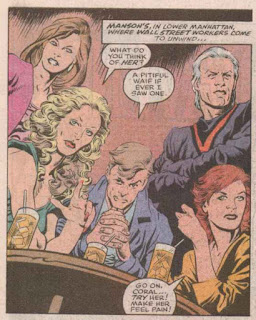 Art this issue comes from Steven Carr, someone whose work I'm not familiar with at all outside this issue.

A Work in Progress
A whole bunch of backstory on the Ravens gets established in this issue, including the fact that there are 24 of them (ie "four and twenty") at any given time, they seem to draw strength from their collective whole, and if one is slain, the killer is transformed to take the deceased Raven's place. 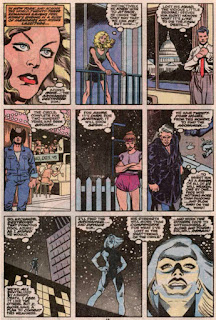 Seeing Jean in the new X-Men uniform, we get yet another comment on how it's apparently risque somehow.

Jean finally gloms onto the fact that Beast's avuncular nature could be a cover for his issues dealing with life as an obvious mutant. 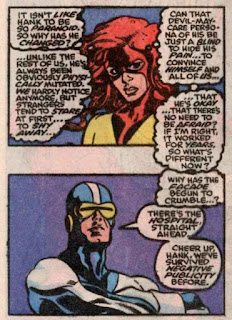 Young Love
It's revealed that Trish has an ex-husband named Burton, who is some kind of bigwig at the network where she works, and Beast, enraged at Trish's coverage of Archangel, throws him in her face. 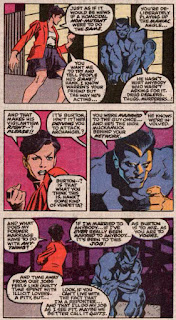 It's in the Mail
The letter column in this issue heavily teases an upcoming wedding - as in, every response to each letter mentions it. Interestingly, a Scott/Jean wedding was planned for the series a few months down the road, an idea suggested by upcoming co-plotter and penciller Whilce Portacio. The idea was eventually scuttled/delayed (EiC Tom DeFalco felt something like a Scott/Jean wedding should happen in X-Men, so he pushed it off), but the fact that Portacio is credited as the driving force behind the idea and it's being teased here, some seven issues before he joins the creative tea, would suggest that even at this time, it was known that he'd be coming aboard, even though his first actual issue of the series is a ways off yet.

Teebore's Take
This issue kicks off a three part story that represents the nadir of Simonson's post-"Inferno" run on X-Factor, built around a new set of antagonists, the Ravens. To her credit, as with the Judgement War storyline, she makes a decent effort to flesh out this new group, giving them a history and series of motivations, and in significantly fewer pages than with "Judgement War". But where the new characters and setting of that storyline had a thematic connection to X-Factor and the larger issues of human/mutant relations on Earth, the Ravens are just a bunch of overwrought, melodramatic psychic vampires, a watered down Hellfire Club comprised entirely of watered down Selenes. It also doesn't help that, like Uncanny at the time, this story suffers from a lack of a strong, consistent artistic hand.

The saving grace through all this, as it mostly has been since the team returned to Earth in issue #51, is the new supporting cast. Charlotte Jones being torn between her role as a cop and her appreciation of Archangels efforts, and Beast's reaction to Trish's reports on Archangel are the best parts of this issue, and help ensure that at least something entertaining is happening, even if all the best stuff is happening on the fringes of a far inferior A-story.