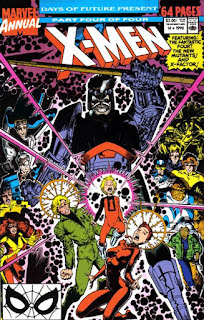 In a Nutshell
The truth about Franklin is revealed as Ahab is defeated.

Plot
In Manhattan, Rachel stops a diner robbery before sensing Franklin's presence. Flying off, the two meet again, and Rachel accepts that Franklin is the man she knew. The pair meet with the Fantastic Four and X-Factor at Four Freedoms Plaza, apologizing for all the recent damage Franklin did. When Mr. Fantastic tentatively broaches the subject of Franklin's younger self's continued torpor, along with the missing Christopher and the continuing threat of Ahab, Franklin alters the minds of his parents, as well as Cyclops and Marvel Girl, to assuage their concerns. However, after Rachel and Franklin depart, Ben Grimm makes them realize what Franklin has done. Meanwhile, Storm and her companion Gambit sneak into the X-Mansion subbasement, only to be caught by Cable. Apprised of the situation, Storm insists they must find Franklin at once, as the man the New Mutants have met is either an imposter or worse. At Four Freedoms Plaza, Ahab attacks Cyclops and Invisible Woman, capturing them and transforming them into Hounds. 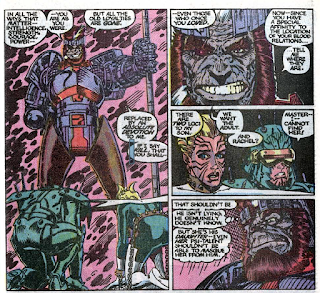 He then sends them hunting for Franklin, Rachel and baby Christopher, all having a picnic at Prospect Park. They capture the young mutants and bring them back to Ahab's lair, but the rest of the Fantastic Four, X-Factor, New Mutants and X-Men intervene, freeing the captives. A battle between the heroes and Ahab's forces rages until Ahab activates an energy field which incapacitates everyone, except Franklin who, it turns out, isn't flesh and blood. Ahab makes a final attempt to slay the weakened Rachel, but is stopped, and teleports away. Storm then confronts Franklin, making him realize he died in the future, and that he is currently existing only as an astral echo, surviving by feeding off the energy of Rachel and his younger self. Letting go, he combines with Rachel's Phoenix powers to sacrifice himself, restoring everything to normal, including his younger self, Cyclops and Invisible Woman, in the process. Later, the teams part amicably, with Marvel Girl eventually returning to her parents' house to contemplate the empathic crystal there, containing the essences of both Phoenix and Rachel.

Firsts and Other Notables
On sale at the same time as Uncanny X-Men issues #263 and #264, this issue spoils the upcoming "Kid Storm" arc in issue #265-267, as Kid Storm appears in this issue with her full memories intact, explaining to people that Nanny captured her in issue #248 and regressed her to childhood, plot developments which are revealed in the course of that story. 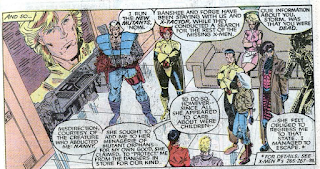 As a result, this issue features the reunion between Storm and Forge, a somewhat anti-climatic moment given Forge's vision of Storm is what motivated him to search out the X-Men along with Banshee in the first place (it also marks the first encounter between Storm and Cable, everyone else and Gambit, etc., but most of that goes unremarked upon). 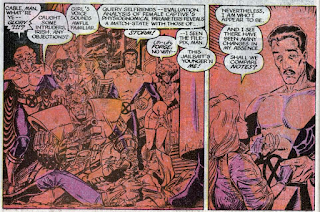 One thing Gambit does do is, when told that Mr. Sinister is responsible for the destruction of the top floors of the mansion, note that he likes the sounds of the man's name. This can be read either as a hint, by Claremont, towards the unused idea that Gambit and Mr. Sinister are both representations of the same child mutant, or as an unintentional hint at later stories which reveal a shared past between the two individuals. 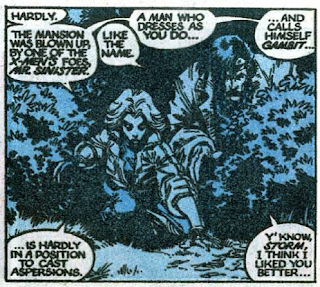 The Cable/Ahab connection is teased again in this issue, with Ahab asking Cable if he recognizes someone when the two are fighting. Again, nothing really comes of this tease, nor was anything ever really intended to, aside from building up the air of mystery around Cable. 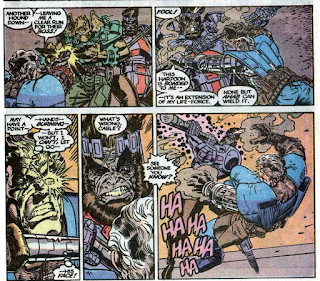 This issue reveals that the adult Franklin Richards who has been responsible for driving most of the plot of this story is, in fact, a psychic echo of the Adult Franklin, cast back in time at the moment of Franklin's death in the future (as seen in X-Men #141). 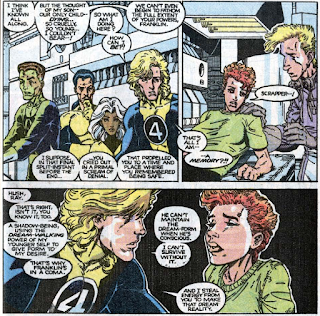 The second story in this annual is set during the events of the first, and features Wolverine, Jubilee and Psylocke (the first time we've seen that trio since issue #261). As Wolverine tells Jubilee the history of the X-Men, they're visited by Franklin and Rachel, with Franklin briefly wiping out Jubilee and Psylocke from existence, before returning them, along with Christopher (which explains how Christopher ended up with Franklin and Rachel between pages of the main story).

There's also a pin-up by Kevin Nowlan, and an alternate cover to the issue by Michael Golden. 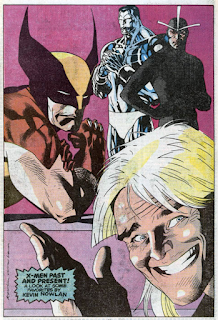 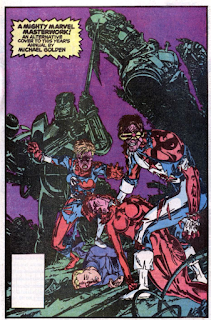 Creator Central
Art Adams (along with a bevy of inkers) returns for his final X-Men annual (after drawing #9, #10 and #12), though this won't be the last we'll see of his work.

The Chronology Corner
This issue takes place between issues #267 and #268 of Uncanny X-Men.

A Work in Progress
Jean continues to be upset about Rachel and the implications she represents for Jean's decisions and future. 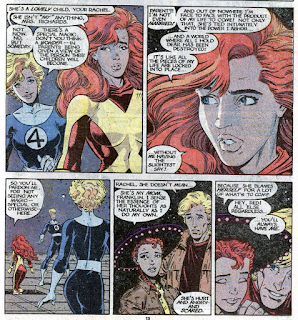 Ahab uses the phrase "laddie buck" in this issue, the first indication that the character is possibly Scottish (which ties into the latter "Rory Campbell is Ahab" hints in Excalibur).

Ahab's role as a timecop, protecting the "Days of Future Past" timeline from time travelers attempting to alter it, is spelled out in more detail in this issue. His "between here and now" lair is also given a name, the Tomb. 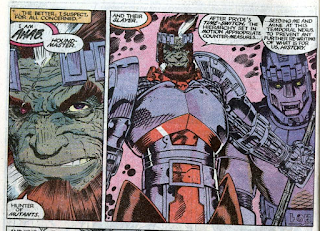 It's noted that some of Ahab's weaponry is derived from Genoshan technology. 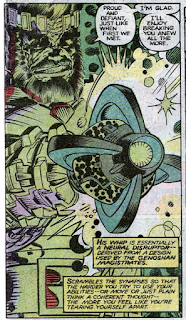 At the end of the issue, he teleports away with a "bamf" sound effect. 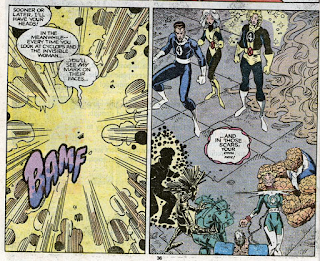 Rachel references a story told to her by her Aunt Sara (Jean's sister) involving Phoenix rescuing Sara from the Atlantean warlord Attuma, a tale told in Bizarre Adventures #27.

As the issue closes, Jean seeks out the holo-empathic matrix crystal Lilandra gave her parents, to which Rachel later added her own essence, in an effort to get to know Rachel a little better. 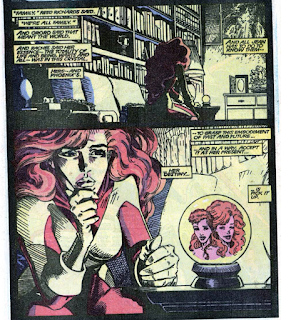 The Grim 'n' Gritty 90s
Throughout the issue, Rachel is wearing some kind of wide-brimmed sombrero with little balls hanging off it. Not sure if that's an early 90s fashion statement I'm forgetting, or what is going on with it. 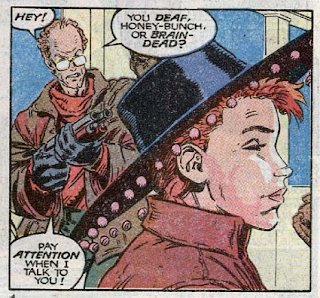 The Reference Section
The men who Rachel stops from robbing the diner, are, I believe, meant to represent three of the bad guys from the first Robocop movie (ie Kurtwood Smith's Clarence Boddiker, the toxic waste melty guy who ends up on ER for awhile, and the, uh, Black Guy with a beret).

Warlock transforms into Darth Vader, an X-wing, and a pterosaur to entertain little Franklin and baby Christopher. 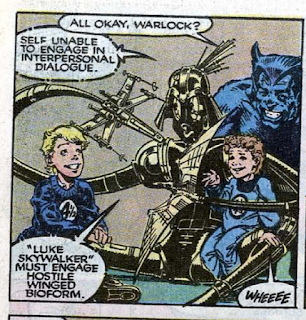 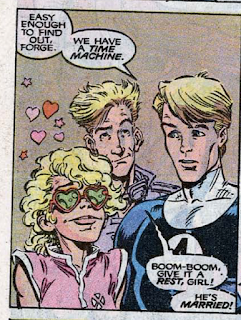 Teebore's Take
"Days of Future Present" wraps up with its strongest chapter, as Adult Franklin's whole deal finally comes to light and he stops mucking around with things in the present. Of course, it helps that the chapter is drawn by Art Adams, in his final X-Men Annual work, sending the story out with the best art of the bunch, but there's also some pleasure to be had in Franklin actually stopping to talk to people, in seeing all these various characters coming together (including a mysterious floppy haired dude named Gambit) and in giving Ahab something to do beyond send generic goons after the main characters. Basically, this seems like a story designed for Claremont (if he, in fact, wasn't the architect behind it in the first place), and there's a sense permeating the previous chapters of the story that they were just treading water until he could gets his hands on it. Now that he has, it reads like a better story.

But overall, it's still not great. It's perfectly fine, better-than-average annual material, and the effort to tell a cohesive story across four annuals is appreciated. But there's definitely a sense of a thin story stretched too far (helped, no doubt, by having to pad out not only four issues-worth of story, but four double-sized ones at that), with a lot of repetition going on involving Franklin just popping in, making a change, then enigmatically popping out, followed by a generic fight with Ahab and some contingent of his goons. Claremont and Adams help end the thing on a high note, but this simply doesn't even come close, in terms of the craft involved or the thematic significance, of the story to which it's ostensibly a sequel.

Which is, perhaps, an unfair comparison, given that "Days of Future Past" is one of the seminal X-Men (and comic book) stories of all time, but the creators also invite that comparison by, you know, doing a sequel to the story. Compared to the original "Days", it'd be near impossible for this to not come up short; as is, it's a perfectly serviceable, albeit overly long and workmanlike attempt to revisit some of the characters and themes of that original story. The effort is appreciated, and the end result is better than the usual annual fare, but a sharper level of craft would have gone a long way towards bridging the gap between the original and the sequel.