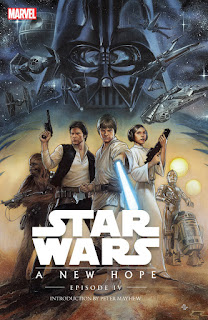 In its continued attempts to ring every last dollar out of its recent re-acquisition of the Star Wars comic book licensing rights, Marvel recently published a hardcover collection of the first six issues of its original 1970s series, which comprise their  adaptation of the first Star Wars film (later subtitled A New Hope, shared by the hardcover collection, most likely to keep it uniform with later collections of The Empire Strikes Back and Return of the Jedi adaptations, two films more commonly referred to by their subtitles). But, in what is most likely an effort to get people, like me, who already read and/or own these particular issues in other formats (including digitally, via Marvel Unlimited) to fork over the money for yet another collection of the New Hope adaptation, this particular publication features all new, modern coloring by Chris Sotomayer, replacing the coloring as it originally appeared in the 70s.

Generally, I'm a big proponent of preserving comics/books/films/etc. as they were originally presented, warts at all. As a capsule of the time in which they were created/consumed, as a record of how the material looked when first distributed, etc. I don't get as riled up about the Star Wars Special Editions (and Lucas' subsequent tweaks in later releases of the films) as many (if nothing else, they afforded me an opportunity to see the Original Trilogy on the big screen while being old enough to know what was I watching), but I do wish the Original Trilogy, in unaltered form, as the films appeared when originally released, did exist on Blu ray or some other form that would enable it to live on, just for the sake of film history, if nothing else.

That said, I have no objections to going back and tweaking one element or another when the original version still exists in some form, and there's plenty of places these six issues have been reprinted that if Marvel wants to try and make a few bucks off a recoloring, it's hard for me to get too worked up over it. Admittedly, I pretty much just bought this hardcover so I could look it over for the purposes of writing this post (and because I got it cheap online); I never would have picked it up otherwise, because redone coloring just isn't enough to get me to buy something I already have and have read ad nauseam.

As for the actual coloring itself, it's...fine. I've said plenty of times before that I lack a lot of the necessary vocabulary to properly critique comic book art, and that holds true for coloring as well. Certainly, there's some charm in seeing some of the series' odd coloring choices "corrected", like the various lightsaber colors or having the green Imperial uniforms changed to a more film-accurate gray (a change originally inspired, perhaps, by the difficulty of consistently rendering grays on the page and the issue of bleed through, even in the late 70s). And the colors throughout the book definitely feel richer and deeper (for lack of better terms), and even the inks, in places, seem thicker and more defined, giving the art overall a much crisper look than more loose, sketchier originals - though that could all just come from the glossy pages as much as the reworked colors. 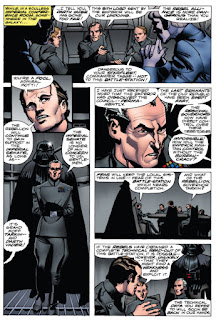 One area where Marvel has consistently excelled in their graphic novel reprints of late has been the extras, as they routinely toss in things like unused or reprint covers, original art, etc. This book is no different, and its features, amongst other things, scans of the original art for the six issues, all the covers (front and back) of the various issues which reprinted this story, including the large, two-volume Treasury Edition issues, many of which I'd never seen before, plus a digital download of the book.

Certainly, none of the extras make this volume a must buy if you already own the issues elsewhere and don't care about the new coloring, but for anyone that does pickup the book on its own merits, it's always nice to have a little something extra, and Marvel's efforts in that regard are appreciated.

Ultimately, it's hard to recommend this book to anyone who isn't a diehard and/or obsessive Star Wars fan (which, granted, I pretty much am most of the time) or someone who has, for whatever reason, never encountered these issues before. Even then, I'd be tempted to recommend such neophytes check out the original issues, just to bask in the unique charms of 70s sci-fi comics. That then, is perhaps the catch-22 of this book, and Marvel's plans to apply the same treatment to their Empire and Jedi adaptations: the recoloring efforts work best when compared in conjunction with the earlier versions, but for anyone already familiar with those original issues, the recoloring doesn't really justify the expense of the book. For anyone who has read this before, it ultimately boils down to how much its worthy paying to satisfy your curiosity (or write a review of it...).

Nonetheless, I'm sure (and presumably Marvel agrees) there's enough of an audience out there (probably a younger one at this point) that's never read these issues before, and will be perfectly happy to pick up this version of the story. While the original issues will thankfully continue to live on in the omnibus and Marvel Unlimited (and probably some other places as well, eventually), I imagine this will be the iteration Marvel keeps in print for book store (and gift shop) sales, and that's just fine.
Newer Post Older Post Home
Posted by Austin Gorton at 12:00 PM