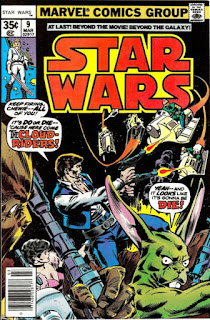 In a Nutshell
Han and his group of spacers battle the Cloud Riders.

Plot
En route to the village they've been hired to protect, Han and his band of spacers help fight off an attack by a group of scavenging High-Hounds, rescuing a young woman in the process. Reaching the village, Han learns the woman he rescued is Merri, daughter of the village's spokesman, and the group begins preparing for the imminent attack by the Cloud Riders. Meanwhile, believing he's found a suitable location for a new Rebel base, Luke breaks communication silence to contact Leia, but is mysteriously cutoff, prompting Leia to declare she's going to find him. Back on Aduba-3, Merri introduces Han to her grandfather, who insists he has a mystical way to combat the Cloud Riders, but Han blows him off. Just then, the Cloud Riders attack. In the course of the battle, Effie is destroyed and Don-Wan is seemingly killed, with no end in sight to the Cloud Riders. But as the battle rages, Merri's grandfather conducts a ceremony, and suddenly, a massive reptilian creature emerges from the nearby mountain.

Firsts and Other Notables
Luke seemingly locates a new location for the Rebel base in this issue, the planet Drexler, but is attacked before he can tell Princess Leia where it is. 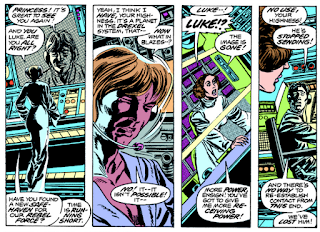 This issue contains a pin-up of the main characters by Howard Chaykin. 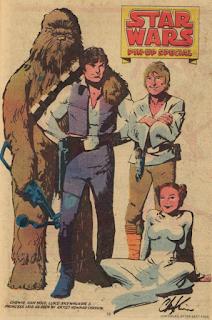 A Work in Progress
Han refers to the Star Hoppers as "scruffy", though he refrains from adding "-looking nerf herders". 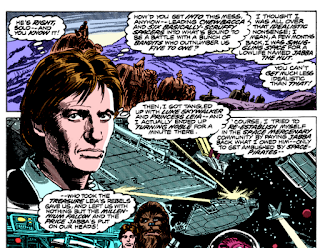 More world building: Luna weed is apparently some kind of narcotic, while a "ji-ant" is a bug, and Wodanian Wood Sprites are small creatures of some sort. 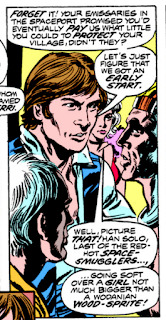 Han references the planet Bestine, which actually is a location within the Star Wars Universe: Rebel pilots Jek Porkins and Zev Senesca are from Bestine IV, while the system of Bestine is where Biggs jumped ship and joined the Rebellion. Bestine is also the name of the capital city of Tatooine, and appeared in dialogue in early drafts of the New Hope script (which is probably where Thomas first encountered the name).

Luke uses an ion scrambler to keep his ship hidden.

Just Yesterday, In a Galaxy Surprisingly Close By
A narrative caption references scarecrows, though there's no indication crows exist on Aduba-3.

Both yards and feet are referenced as a unit of measurement.

Teebore's Take
As Han's Star Hoppers come to blows with the Cloud Riders, Thomas & Chaykin, to their credit, take a moment to acknowledge Han's atypical behavior in this story, spending a few panels on the character wondering why he's sticking his neck out for a bunch of settlers for such little pay. It doesn't exactly ameliorate that wonky characterization, but it does at least hang a lampshade on it, and that's appreciated.

Meanwhile, Luke finds a possible new location for a Rebel base before running into trouble, and the Luke material in this issue makes something apparent: all the scenes involving him and Leia feel very empty and devoid of other characters. There's definitely in-story logic to sending Luke out scouting, something which was addressed in the previous issue, but at the same time, it just adds to the overall sense that the entire Rebellion at this point is Luke, Leia and General Dodonna (and the latter is just there so Leia has someone to talk to when Luke is gone). Obviously, the post-New Hope Expanded Universe (and even the film canon) is in its infancy here, so it makes sense that characters who, in hindsight, might be expected to be hanging around (like Wedge or Mon Mothma) are absent.

But it doesn't change the fact that by splitting the cast, Thomas and Chaykin have made one half of the book feel very small, even while they're giving Han and Chewbacca plenty of new characters to interact with. Of course, the choice to put Luke and Leia on the back-burner was made over the creators' heads, but it almost would have been better if they'd just ignored those characters outright (rather than featuring them in brief interludes), because, as it is, the end result is the sensation that two thirds of the film's main characters, and everything with which they're involved, are afterthoughts, operating entirely away from anything of narrative importantance.

Next Issue
Space-Godzilla joins the fight against the Cloud Riders.