Game of Thrones 5x09: The Dance of Dragons 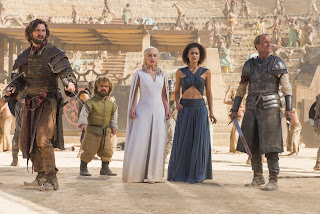 War is erupting all over the world of Game of Thrones. Some are just recovering from it. Some are trying to avoid it. Some are in the midst of it. But, in the end, it's inevitable.

On the road
Stannis Baratheon is preparing for his war against Winterfell. Of course, what he doesn't realize is war is already coming to him. In the middle of the night many of his tents and one poor horse are engulfed in flames. (And yes, I know that more horses and some soldiers were also casualties off screen.)

In the aftermath Davos goes over the damage with Stannis. Basically, they're screwed. Apparently, Ramsay and his 20 good men were able to sneak in, start fires and sneak out without ever being seen. They were able to do this because...they know the land better? Yeah, I don't get it either. Stannis commands to have the guards on duty executed and I can't blame him. But those guards aren't the only deaths he's thinking of approving.

Stannis first sends Davos to the Wall to ask for more men and supplies. Davos reluctantly agrees but can't convince Stannis to let him bring Stannis' family back to the Wall with him. I think we all know why. I almost think Davos does too, but I'm not sure how he knows. Regardless, he does have a heartbreaking (in retrospect...or at the time if you figured out what was coming) good bye talk with Shireen before leaving.

Later, Stannis visits with Shireen. Stannis' daughter can sense that something is bothering her father and promises that she'll do anything in her power to help him. Sigh. We all know where this is going, right?

Yup, Melisandre burns the little girl at the stake. Shireen shrieks. Soldiers are forced to watch...for some reason. Selyse actually tries to save her daughter. All good will Stannis Baratheon and Melisandre have garnered is immediately gone. All the viewers feel icky.

The Wall
Jon Snow and what's left of the Wildlings are returning from a battle in their war with the white walkers. Jon arrives at the Wall's gates and now it's up to Alliser to allow them all through. And after a dramatic pause...he does. Though Alliser still doesn't approve.

Jon Snow is all mopey about his “failure” at Hardhome. Even though if he wasn't there all the Wildlings would be dead instead of some of them. Sam even tries to point this out but it's no use, Jon Snow's gotta Jon Snow. Oh, and Ollie also gives Jon a disapproving look. I certainly like where that's probably headed (sarcasm alert).

Dorne
Prince Doran Martell is desperately trying to avoid war. He brings Jaime to him and questions Jaime about why he went on a covert kidnapping mission instead of just asking for Myrcella's return to King's Landing. Jaime says they would have just asked if Dorne hadn't sent them that threatening message. Prince Doran is like, “Bees are on the what now?”

They all quickly figure out that Ellaria was behind the message. So Prince Doran allows Myrcella to return to King's Landing provided Trystane is allowed to accompany her and provided that Trystane is allowed a seat on the high council. Jaime agrees to these conditions. It all sounds fair, so I'm sure Cersei would be against it...if she wasn't imprisoned at the moment.

This just leaves the matter of Bronn. His fate is given to the hands of Trystane. Bronn is still imprisoned across from the Sand Snakes. They're females so you know they have to be catty towards each other. Also, since Tyene Sand is a woman, as Bronn is taken from his cell, she has to hear him call her beautiful one last time. He does and she smiles because being attractive to men is all that's important to a woman, y'know?

Anyway, Bronn is allowed to go free. However, there is a condition. That condition is getting elbowed in the face by Doran's head guard, Areo Hotah. Bronn isn't even given a chance to decide before the elbow levels him. Although, I'm sure that's the choice he would've went with anyway.

While Mace buffoons his way around Braavos, Meryn heads to the brothel. Arya follows. Arya is nearly kicked out of the brothel but, luckily, a prostitute is hungry for her clam...er...oysters. That's more accurate and sounds...better?

Quickly moving on. Arya spies on Meryn who is in the back room. None of the prostitutes are up to snuff for Meryn. Specifically, they're not “young enough” for him. Sigh. So yeah, Meryn is a pedophile. Yay! Game of Thrones!

Eventually Meryn gets a girl who suits his wants (she doesn't LOOK as grossly young as I was fearing but I don't know her age for sure...). Soon Arya is kicked out of the brothel. Arya returns to the House of Black and White and tells Jaqen that “the thin man” still lives because he wasn't hungry but she'll deal with him the next day. Jaqen apparently accepts this answer.

Meereen
Daenerys, Tyrion, Missandei, Daario and Hizdahr zo Loraq are watching the battles in the fighting pit. Tyrion and Hizdahr debate the merits of the fighting pits. Tyrion thinks there's already too much death in the world. Hizdahr says you can't make an omelet without cracking a few eggs. Daenerys is just generally disgusted by it all.

Eventually, Jorah shows up in the fighting pit. Apparently he's in some sort of battle royal. After numerous close calls (including a man standing over Jorah with sword and taking an inordinately long time to strike before getting hit from behind) Jorah emerges victorious. His victory celebration is cut short when he decides to hurl a spear towards Daenerys.

Luckily, Jorah's impeccable aim meant that the javelin struck the Son of the Harpy that had somehow snuck into the royal box without anyone noticing. Then many Sons of the Harpy reveal themselves in the crowd. They aren't they aren't there to make peace.

The Sons of the Harpy start slaughtering everyone in sight. The fighting pits soon become a bonafide warzone. Hizdahr tries to direct Daenerys to safety but gets stabbed to death for his efforts. Everyone is scattered. Missandei nearly bites it but is saved by Tyrion of all people.

The royal party plus Jorah run for safety but just before they get out the door they're headed for it closes and a Son of the Harpy jumps in the middle of them. The Son of the Harpy just...stands there...until Jorah stabs him in the back. Let that be a lesson to you all. If you decide, for some reason, to jump right in the middle of a group of your enemies, don't immediately take a coffee break.

Anyway, pretty soon what's left the Daenerys' guards form a circle around the royal party and it's really looking like the Jedi on Geonosis. Then, like the Jedi, Daenerys and company are saved! But their green savior is not Yoda but instead, Drogon the dragon.

Drogon starts flame-breathing the Sons of the Harpy and eating them and generally doing dragon things. He gets speared a few times for his efforts but Drogon don't give a shit. Daenerys walks up to Drogon. He first yells at her but then allows her to hop aboard.

Daenerys tells Drogon to fly and off she goes completely ditching everyone else. Tyrion and the others watch the dragon fly away in awe. Or they're just worried about how the hell THEY'RE going to get out of this.

Other Thoughts
I'm not going to enjoy Arya pretending to be a hooker (at least, that's what I'm assuming will happen).

Meryn Trant gave Arya odd looks periodically. I'm not sure if he recognizes her or is just attracted to her.

So was Arya's plan simply to poison the oysters she gives to "the thin man?" If so, why was it necessary for Arya to learn "everything about the thin man?" Seems like a plan that doesn't need a whole lot of recon.

The questions I don't know the answer to: Did Jaqen believe that the "the thin man" simply wasn't interested in her oysters or did he know Arya was lying? Was Arya running into Meryn Trant part of Jaqen's plan all along? Do I really care?

Now that I think of it, sending the Lannisters a threatening message was pretty dumb of Ellaria Sand. Who is she, the Riddler?

I thought Meereen didn't have a monarchy (at least for a long time) before Daenerys showed up? If so, where did this tradition of the queen needing to clap before a battle in the fighting pits come from? Who did it before Daenerys?

Drogon is the second big special effects budget sucker in as many episodes that I thought was a goner for the sake of money.

We may (rightfully) resent Stannis for what he did but, for all you Jaime lovers out there, keep in mind Jaime attempted pretty much the exact same thing way back in the first episode.

Obviously Stannis sent Davos away because he would've stopped what had happened to Shireen. At the same time, I couldn't help but think what Stannis was saying made sense.

Once Selyse becomes the voice of compassion and reason you know things have gone awry.

Ser Alliser: You have a good heart, Jon Snow. It'll get us all killed.

Hizdahr zo Loraq: Yet, it's an unpleasant question, but what great thing has ever been accomplished without killing or cruelty.
Tyrion: It's easy to confuse "what is" with "what ought to be." Especially when "what is" has worked in your favor.

Hizdahr zo Loraq: So your reasons are true and there's are false? They don't know their own minds but you do?
Tyrion: Well said. You're an eloquent man. Doesn't mean you're wrong. In my experience, eloquent men are right every bit as often as imbeciles.