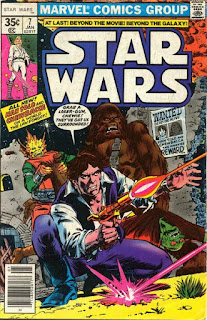 In a Nutshell
After being robbed by pirates, Han and Chewbacca lay low on the planet Aduba-3.

Plot
Eager to pay off Jabba the Hutt with the treasure they received from the Rebellion, Han and Chewbacca say goodbye to Luke, Leia and the droids and head for Tatooine.  En route, however, they're boarded by pirates led by Crimson Jack, who take the treasure for themselves. Realizing Jabba will soon have a price on their heads, Han and Chewie resolve to lay low for awhile, and land on the remote world of Aduba-3. Nearing the local cantina, they spot a group of spacers mobbing a priest and scare them off, learning that the priest is intending to honor the dying wishes of a cyborg who wishes to be buried on Spacers' Hill, much to the objections of the spacers, who hate all kinds of robots. 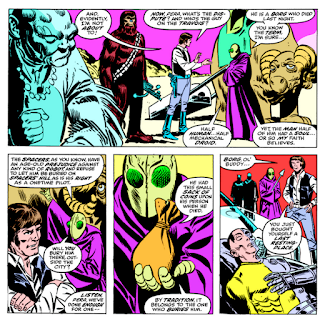 Han and Chewie agree to help the priest, who tells them doing so earns them the right to the cyborg's remaining money. Setting out for Spacers' Hill with the body, the party is attacked once again by the spacers. They fight back and drive off the mob, but the priest's bantha is killed in the process, requiring Chewbacca to carry the coffin himself. After the priest performs his rites, Han and Chewbacca return to the cantina, where they use some of the money they received from the priest to buy the house a round, in order curry good will with the spacers they fought earlier. As Han chats up an attractive patron, he's interrupted by three men who enter the bar and tell him they have a most agreeable proposal for him, unless he has an unfortunate aversion to dying.

Firsts and Other Notables
The six issue adaptation of Star Wars complete, this issue is the first of the series to feature an original story. As Roy Thomas explains in a letter column editorial in this issue, with George Lucas still determining exactly what the film's sequel would entail, Thomas was told for the time being to use Han and Chewie, as it was most likely that the sequel would focus more heavily on Luke and Leia (unmentioned in the blurb is the fact that, unlike Mark Hamill and Carrie Fisher, Harrison Ford only signed on for the one movie, making his character the most unlikely to reappear; this same logic led to Han's absence from the post-New Hope novel Splinter of the Minds Eye). 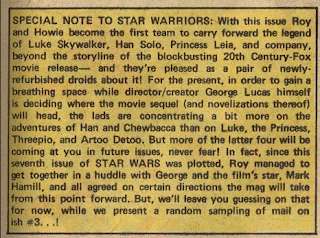 Also of note from that blurb is that Thomas and Chaykin met with Mark Hamill, as well as George Lucas, to discuss future stories involving Luke.

The Millennium Falcon is attacked and boarded by pirates led by Crimson Jack and his assistant Jolli; not sure if they'll pop up again, but if they do, this marks their first appearance. 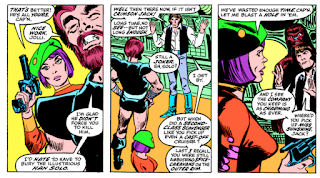 A Work in Progress
As Han departs the rebel base on Yavin 4, Luke mentions the need to find a new base, a popular post-Star Wars plot for expanded universe fiction (Marvel's current Star Wars series is dealing with the thread right now). 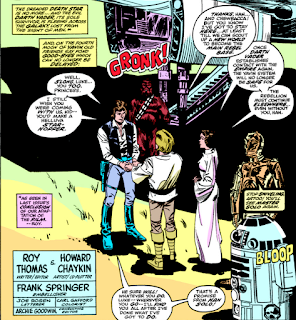 Picking up on another lingering thread from the film, Han and Chewie are on their way to pay back Jabba the Hutt (using the money they got from the Rebellion for rescuing Princess Leia) when they're attacked by pirates. 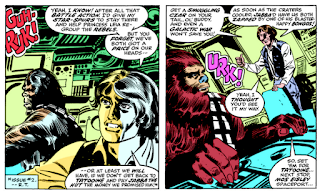 Amongst the pirates working with Crimson Jack is a fallen stormtrooper, another popular EU trope.

Han mentions the planet Aquilae, which actually is an established Star Wars planet (it's the home of the Aqualish species, including Ponda Baba aka Walrus Man, aka the guy with a butt face who got rough with Luke in the cantina and had his arm chopped off by Obi-Wan as a result). Not sure if somebody at LucasFilm gave Thomas that name, or if he just stumbled onto it by coincidence.

The priest on Aduba-3 is using a bantha to haul the dead cyborg around, establishing that they exist on planets other than Tatooine.

A good decade before they'd bedevil the crew of the starship Enterprise, Han helps bury a cybernetic pilot in this issue. It's noted that spacers have a lot of prejudice towards "borgs", which doesn't really get explored anywhere else (it's possible Thomas is picking up on the whole "we don't serve their kind" line from A New Hope and extrapolating this behavior from that).

Blasters are called, in various places, both "laser gun" and "ray gun".

One of the spacers uses a "Sikurdian battle axe" against Han. 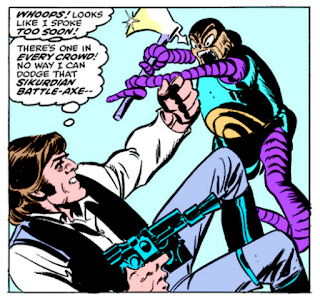 Continuing the trend of putting "star" or "space" in front of words to instantly make them more science fiction-y, Han references his "space-spurs", refers to himself as a "space-mercenary" who  battles "space-pirates", some of whom wield actual metal cutlasses.The narration also refers to the "Gods of Space". 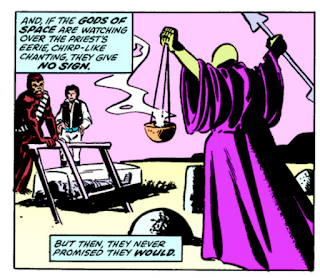 Um, Actually
En route to Tatooine, Han notes the Falcon has a few light years to go before it can jump to Hyperspace; generally speaking, lightspeed-capable ships can make the jump as soon as they're clear of any gravity wells (like planets or stars) and the nav-computer has laid in a course that avoids any further such masses along the way. 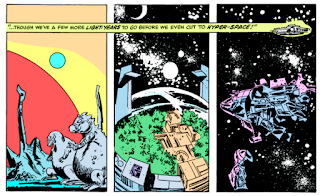 Han is shown to know and speak "High Galactic"; later stories establish that Basic is the standard language in the galaxy ie everyone in the films speaking English is actually speaking Basic. Other languages tend to be native to a specific planet or species. 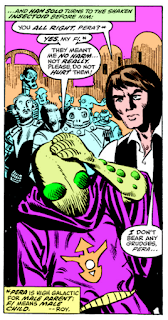 The Wookiee homeworld is described as being a place of great and terrible violence, when in fact Kashyyk is quite peaceful, as are the Wookiees, when left to themselves. 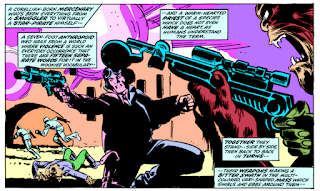 Just Yesterday, In a Galaxy Surprisingly Close By
Unable to recognize the religion practiced by the borg-burying priest, Han notes that he should have attended more Sunday School. 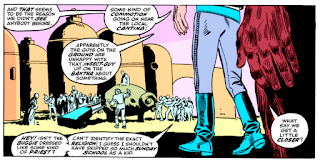 That 70s Comic
At various times, Han tells Chewie things that Chewie probably already knows, as though Han knows someone who might not be familiar with the situation could be listening to or reading his words...

The three men who proposition Han at the end of the issue are pretty stereotypical Asian/samurai types. 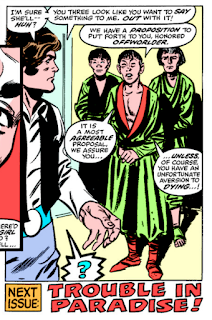 Bullpen Bulletins
In addition to announcing the release of the second Star Wars Treasury Edition issue (reprinting the last three issues of this series in an oversize format), the Bullpen Bulletins this month announces the new John Byrne/Terry Austin art team on X-Men.

It's in the Mail
A letter in this issue complains about the differences between the opening crawl of the film and the first issue of the comic book; the response is basically a lesson in the process of film adaptation. 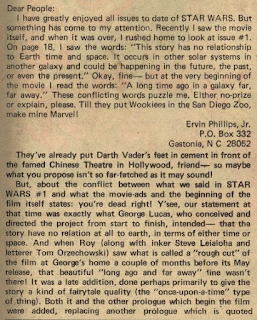 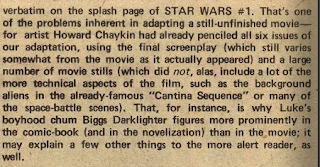 Teebore's Take
For his first original story set in the Star Wars Universe, Thomas chooses to feature Han Solo, which, edicts from George Lucas aside, isn't surprising, given how central Luke was to the film's narrative and how dependent he is on the presence of other characters to interact with at this point in his development. For the most part, it works: Thomas doesn't quite have a handle on the character's voice yet - his Han is a more generic sci-fi type, lacking the droll sarcasm of the film version - and the presence of the effectively non-verbal Chewbacca means Han spends a lot of the issue essentially talking to himself, but he's an effective POV character as Thomas draws on the Western influences of the character to expand the universe, requiring less "aw, shucks!" wonderment and potential tangles with future stories than if Luke were being used.

The downside is that story reads much more like a generic sci-fi story than a Star Wars one, especially today (when so many of the elements of the universe have been so heavily codified). Thomas is clearly working without much of a net here, but his use of more generic terms over the now-accepted Star Wars ones becomes much more obvious without the film trappings to shore things up, and other elements of the story (the priest, the borg) feel, in hindsight, out of place within the Star Wars aesthetic. Following up on the Jabba thread from the film is a smart place to start, but that gets jettisoned quickly, and the places where Thomas and Chaykin are clearly trying to evoke the movie - the domed huts on Aduba-3 that resemble the buildings on Tatooine, a bantha, another alien-filled cantina - come across as repetitive and unoriginal more than anything. This isn't a bad story, and there's definitely some charm in watching Thomas & Chaykin trying to expand this universe beyond the confines of the film, but the end result feels very generic, a decent enough sci-fi story that still isn't much of a Star Wars one.

Next Issue
Han and Chewbacca meet some new friends.