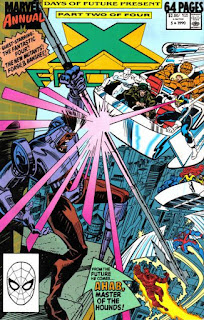 In a Nutshell
X-Factor joins the fight against Ahab as Rachel Summers and Franklin Richards meet in the present.

Plot
As X-Factor trains inside Ship, Franklin Richards appears outside, declaring it isn't right before making Ship disappear. As X-Factor scrambles to get to the ground safely, Franklin vanishes. As Ahab dispatches a pack of Hounds to attack Franklin, Ben Grimm, She-Thing, Human Torch and Forge, tracking Franklin's energy signature, meet up with X-Factor, and X-Factor agrees to help locate Franklin. They find him near Liberty Island, but just then, Rachel Summers arrives. Franklin, believing Rachel shouldn't be so powerful and Rachel, believing Franklin to be dead, battle one another until Franklin disappears again. Jean Grey, drawn to Rachel's Phoenix effect, confronts her, and learns the young woman is her daughter. 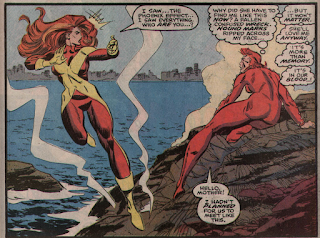 Meanwhile, Ben Grimm, She-Thing, Cyclops and Archangel locate Franklin, who is under attack by a Sentinel sent by Ahab, but then an unharmed Franklin makes it disappear before vanishing as well. Regrouping on Liberty Island, the assembled teams are attacked by Ahab and his Hounds, who seek to retrieve Rachel, his greatest warrior. But Rachel destroys all the Hounds before flying off, forcing Ahab to call forth more from the future. Just then, Banshee, the New Mutants and the rest of the Fantastic Four arrive and join the fray. Working together, they destroy Ahab's time displacement technology, sending him and his hoard back to the future, though Iceman and Archangel are wounded in the process. In the aftermath, Franklin appears again, telling Cyclops that Rachel is his only child, that Christopher was never supposed to be born, and so he makes Christopher disappear, leaving behind a devastated Cyclops.

Firsts and Other Notables
After a few near misses, this issue marks the first encounter between Jean Grey and her daughter from an alternate timeline, Rachel Summers. Coming as it does in the midst of Jean's struggles reconciling her memories with those of Maddy and Phoenix, on top of her recent refusal to marry Scott, she's not terribly receptive to the idea of meeting a grown daughter she had with Cyclops, but the relationship between the two will warm over time. 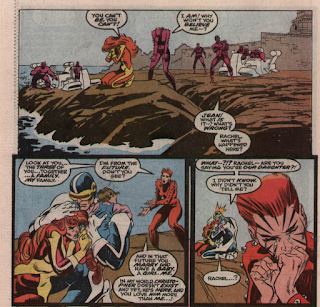 Cyclops also learns that Rachel is his daughter in this issue, something earlier stories suggested he already knew, even as Rachel withheld the information from him and believed him to be ignorant, though his reaction here suggests he had no clue despite their earlier time together.

The second story in this issue deals with Jean visiting her own grave and coming to terms with her current situation via a chance encounter with a holocaust survivor at the cemetery. It's titled "Tribute the First", with "Tribute the Second" being the title of the Doug Ramsey story in New Mutants Annual #6 (another indication of the botched annual order). I believe "Tribute the Third" appears in next year's X-Factor annual.

The issue also includes an X-Factor pin-up by Dale Keown and Bob McLeod, and an ad for the upcoming Prisoner of Love graphic novel. 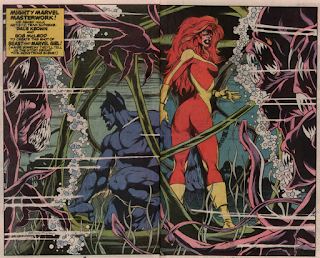 Creator Central
Jon Bogdanove, who worked with Louise Simonson previously on Power Pack (and will re-team with her on DC's Man of Steel series), provides the art for this issue. He will serve briefly as X-Factor's regular penciller, from issue #59 through #62. Whatever charm his work had on Power Pack is starting to slip away, as much of what we get here is distractingly-big lips and twisted, misshapen anatomy, which will characterize his short X-Factor run.

The Chronology Corner
Despite what the cover says, this is actually the third part of "Days of Future Present", with a footnote inside assuring readers that New Mutants Annual #6 occurs before it.

X-Factor appears in this issue between issues #58 and #59 of their series.

A Work in Progress
This issue reveals that Ahab's harpoons can transform to energy, and have the power to transform individuals into hounds against their will. 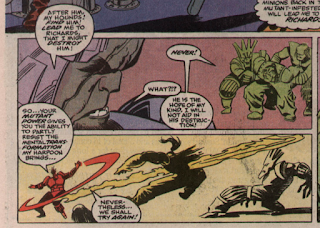 Beast is somehow aware of Rachel's true identity, and the relative state of who knows about her, as well as Rachel's memory problems, and I'm not entirely sure how he'd know any of that at this point. 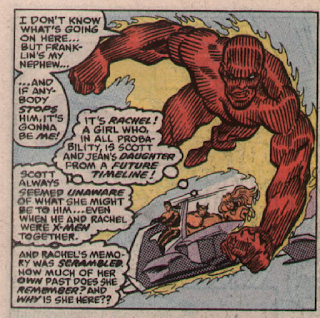 Jean notes that Rachel is the same age as she is. 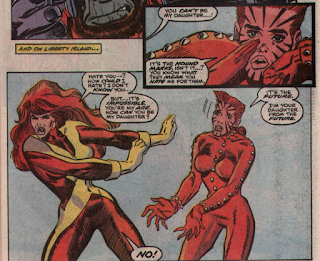 Adult Franklin declares that baby Christopher will have more power than all of the assembled heroes. 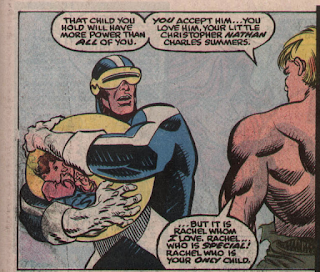 Wolfsbane and Rictor are not amongst the New Mutants who appear in this issue.

Young Love
The Scott and Jean angst, a remnant of Scott's failed marriage proposal, looms large over this issue. 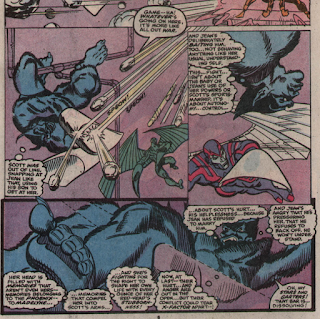 Jean and Forge are seen briefly talking in this issue, a nod to the short-lived idea of a romantic subplot between the two we'll see develop in Forge's two upcoming X-Factor guest appearances. 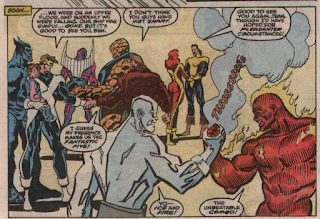 Teebore's Take
Questionable Bogdanove art aside, this is probably the strongest chapter yet of the story. Franklin's whole schtick is still a mystery, but this issue at least brings Rachel (setup in chapter 1) into the mix, and in doing so, gives us a fairly significant moment for the overall X-narrative, the first encounter between Rachel and the real Jean Grey. And continuing the trend of increasing Ahab's role with each chapter, this issue finds the villain leading his forces into battle himself, finally giving him more to do than just glower from his time-displaced fortress. He still remains a one note villain (we don't really know WHY he's so intent on stopping Franklin and preserving the timeline, other than "it's his job"), but it's nice to see him out in front instead of hiding behind even more generic lackeys. With a better artist involved, this would easily standout as the best X-Factor annual yet; as it is, it still probably takes that honor, just for actually doing something that has a significant impact on the characters. And it's nice to see the "Days of Future Present" story ramp up as it heads into its conclusion, even if the whole point of the thing is still something of a mystery.