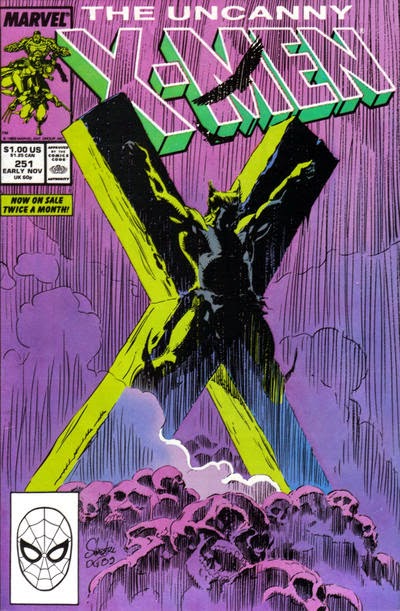 In a Nutshell
The X-Men enter the Siege Perilous and Wolverine is crucified by the Reavers.

Plot
Chained to a large wooden X outside the X-Men's Outback town, Wolverine awakens as Donald Pierce and the Reavers approach. Pierce taunts the defeated X-Man, but Wolverine manages to make him angry, and Pierce storms off. The Reavers proceed to search the town, believing they saw someone, but Jubilee manages to evade them. Outside, Wolverine slips into a fever dream, hallucinating the arrival of first the X-Men and then some of his old foes before entering Dreamtime and reliving first his capture, and then the X-Men returning from the Savage Land and being telepathically coerced by Psylocke to enter the Siege Perilous in order to escape the Reavers. 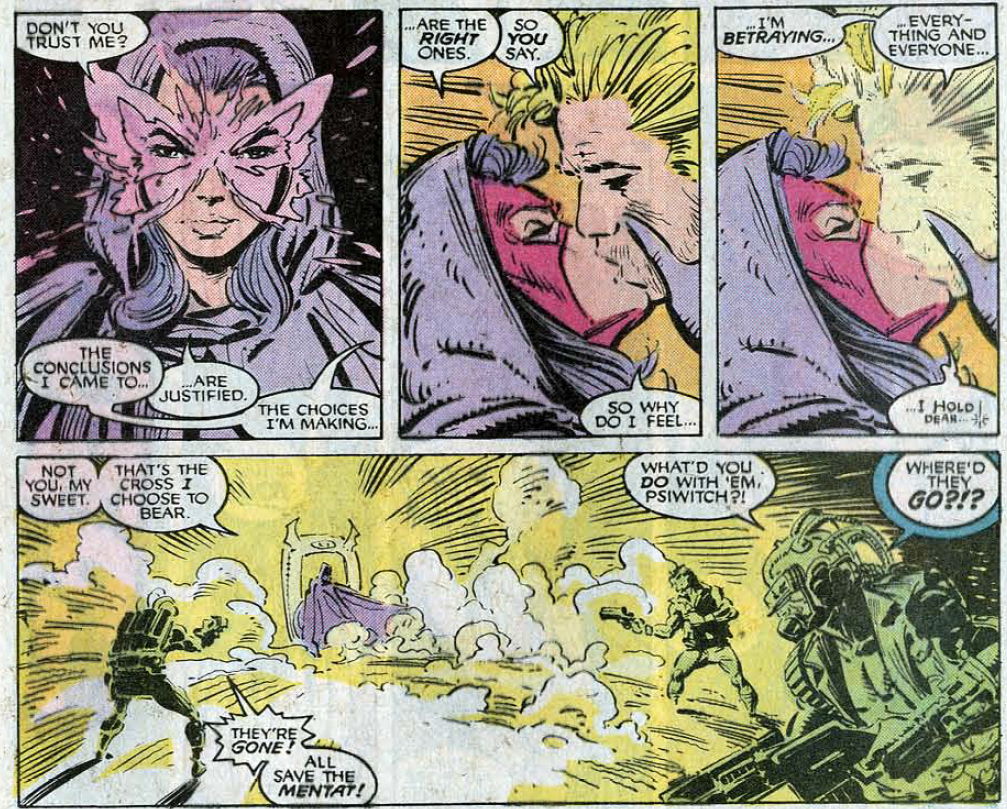 That evening, Jubilee watches in horror as the Reavers crucify Wolverine, driving stakes into his hands and feet in an effort to make him scream. Pierce then crushes the Siege Perilous gem, telling Wolverine his friends will never be coming back, before the Reavers are driven inside by the onset of a massive storm. During the storm, Jubilee debates whether or not she should emerge from hiding to help Wolverine, or stay where it's safe, while Wolverine uses his pain to go berserk, ripping himself free of the X and collapsing to the ground. Looking up, he reveals that he knows Jubilee is watching, and calmly asks if she'll give him a hand.

Firsts and Other Notables
This issue concludes the dissolution of the X-Men, as the remaining active members of the team (Psylocke, Dazzler, Havok and Colossus) enter the Siege Perilous in order to escape the death Psylocke forsaw last issue. This effectively disbands the team, leaving the series a team book without a team for the first time since the government ordered the X-Men to disband in the wake of Professor X's death, way back in issue #46. 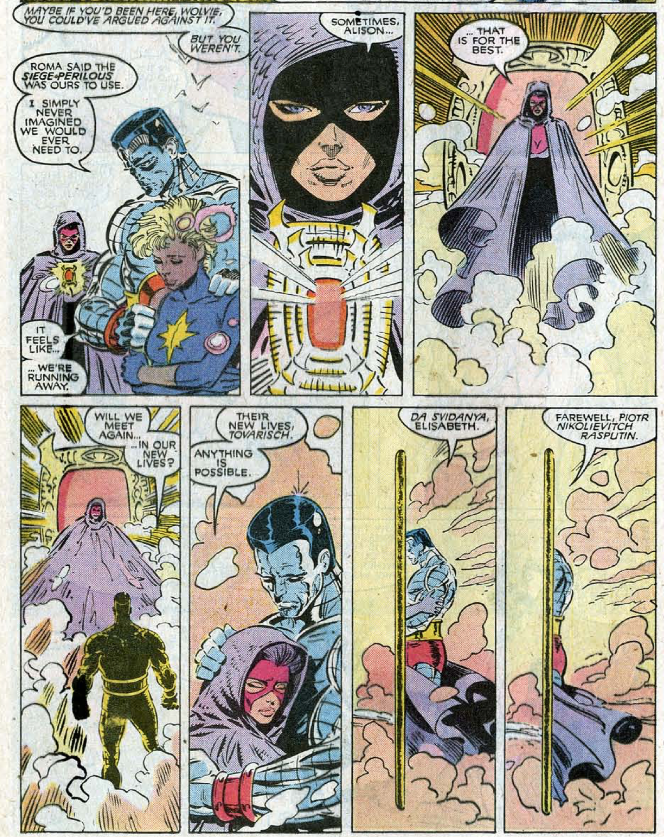 Psylocke will pop up again shortly, and maintain a presence in the book moving forward, and it won't be too much longer after that before Colossus is back to what we know and love (though his absence will mark his longest time away from the book yet), but while we'll see both of them again before too long, this issue essentially marks the last time Havok and Dazzler appear as X-Men, the former eventually emerging from the Siege Perilous to become a Genoshan Magistrate and then spending most of the 90s in X-Factor and/or a series of convoluted storylines after which he'll eventually rejoin the X-Men proper in the 00s, while the latter, following her brief post-Siege appearance, functionally disappears from comics, a few guest star appearances here and there aside, until Claremont briefly dusts her off for his New Excalibur series.

Wolverine returns to the series this issue, ending his absence which began in issue #246. He, along with Jubilee (and eventually Psylocke) will become one of the recurring factions of X-Men the series follows during this "non-team" era.

The cover of this issue is one of the series' most iconic.

Wolverine begins hallucinating the presence of people from his past in this issue, a habit that will continue on and off pretty much up through "X-Tinction Agenda" and the formal reformation of the team. 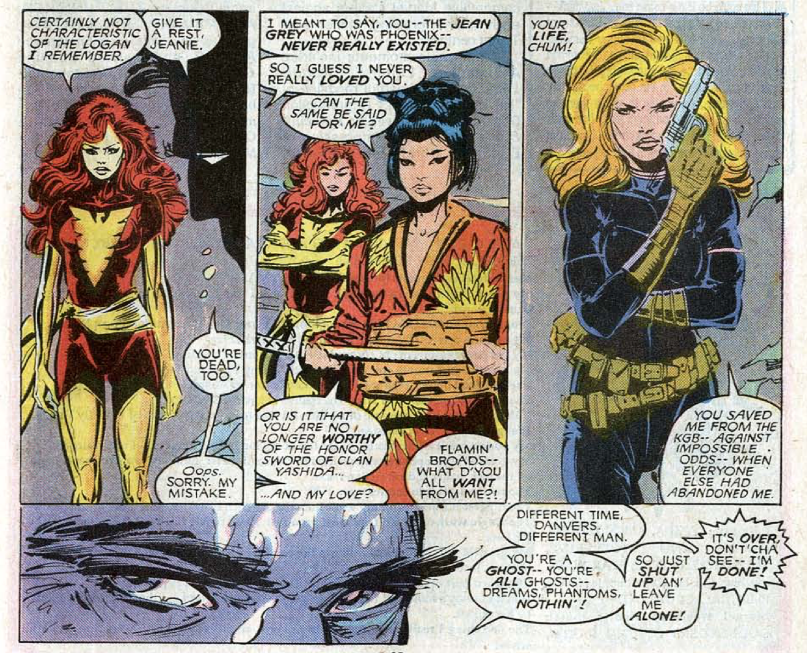 He also sees Storm as a child, and there's reports of major storms centered on Cairo, Illinois, both of which are teasing Storm's upcoming return and the condition she'll be in when she appears. 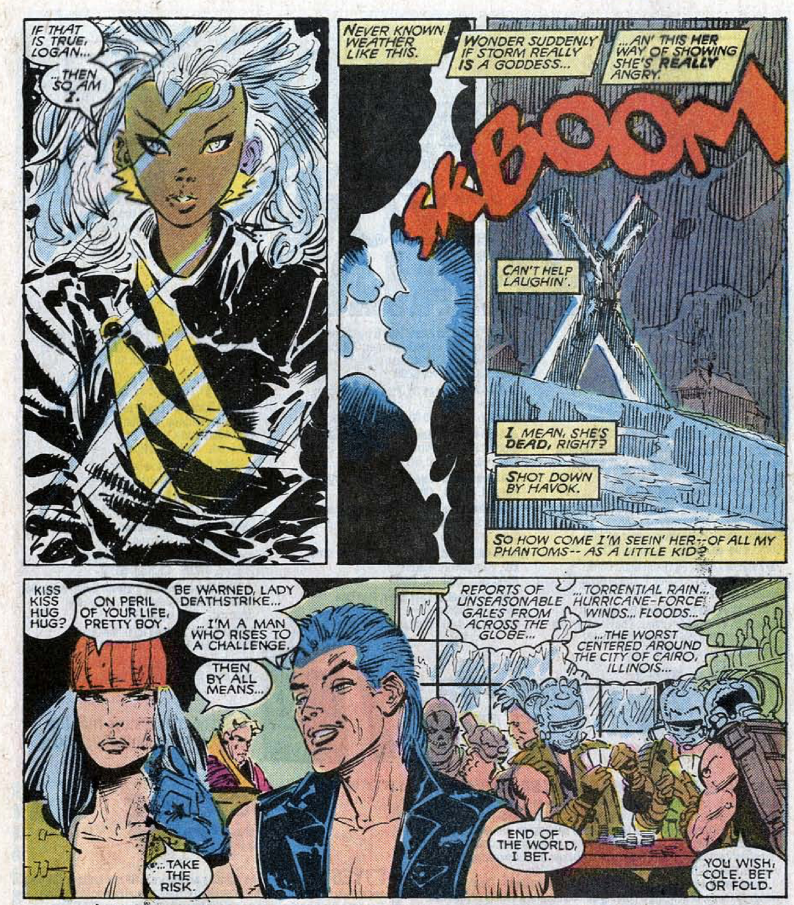 Jubilee's rescue of Wolverine at the end of the issue is the first time she's interacted directly with any of the X-Men, and marks the beginning of their hero/sidekick relationship, a la his previous relationship with Kitty Pryde. 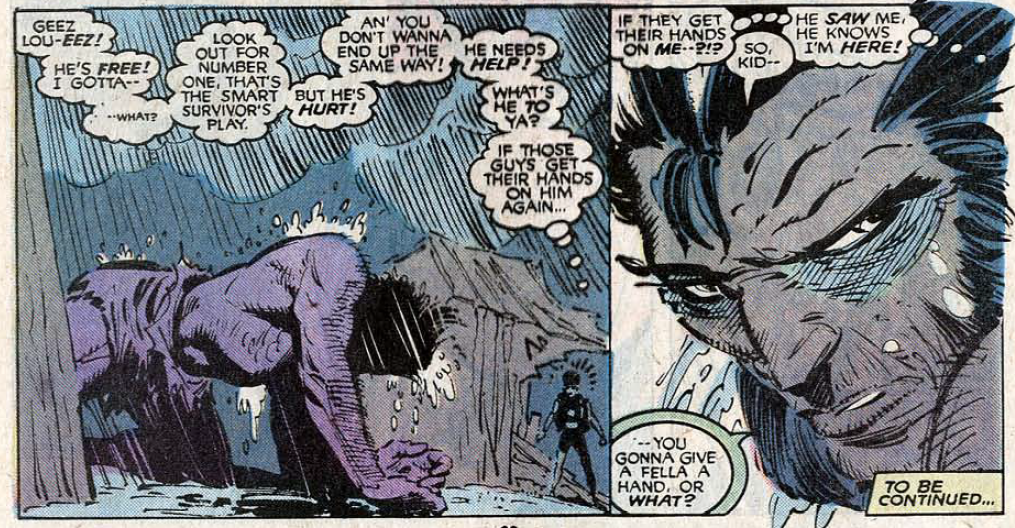 The Chronology Corner
Wolverine appears in this issue, and all his subsequent appearances in X-Men through issue #268, between issues #23 and #24 of his regular series.

A Work in Progress
Pierce is referred to as a former White King of the Hellfire Club, which is incorrect (he was the White Bishop).

It's established that Pierce helped turned Cole, Macon and Reese into cyborgs, and that he is responsible for the creation of the original Reavers (the ones the X-Men mostly decimated in issue #229). 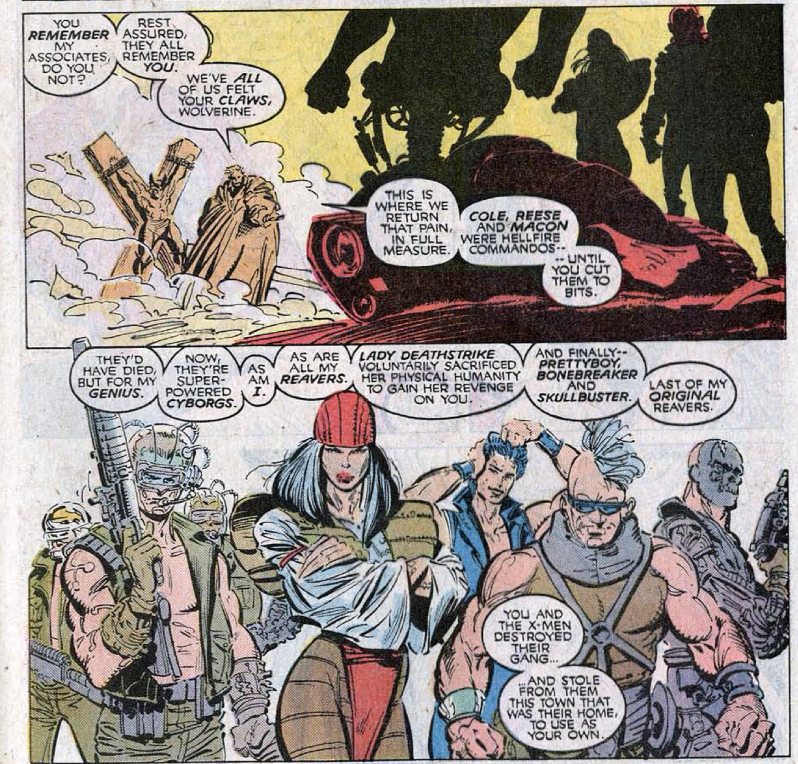 It's suggested that Jubilee is immune to the town's sensors, another idea (like her immunity to telepathy) that seems built on plot convenience and goes mostly unmentioned moving forward. 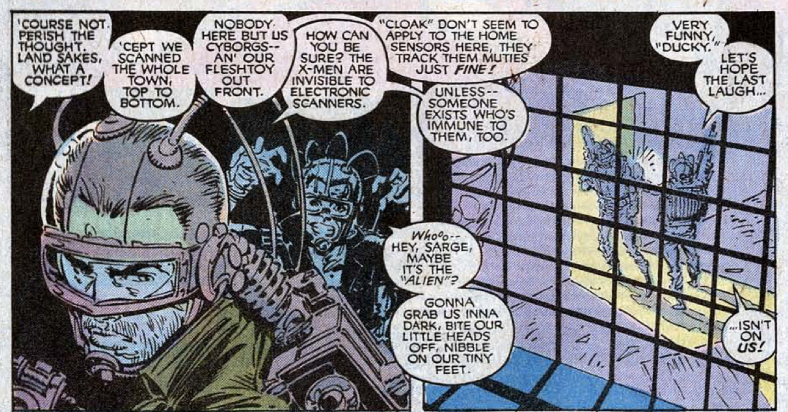 In one of his hallucinations, Wolverine is taunted by Sabretooth and Ogun, who say that nobody gets to kill Wolverine but Sabretooth, and idea previously suggested in Classic X-Men and Wolverine, but appearing here in X-Men for the first time. 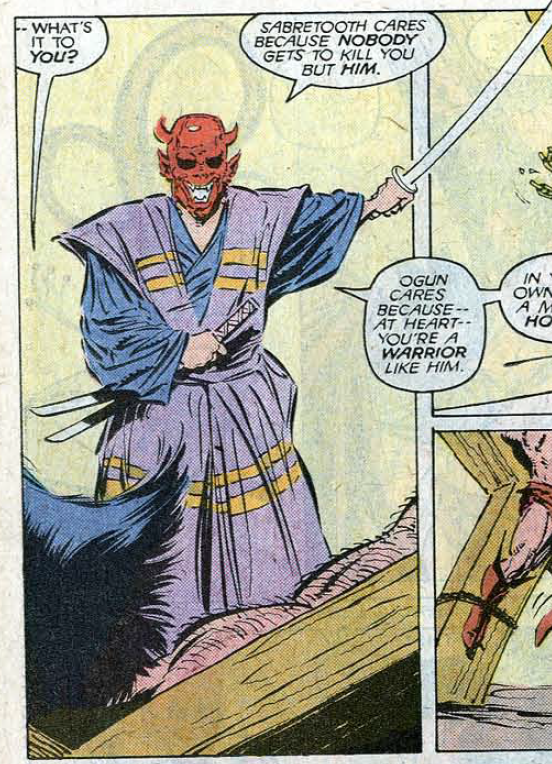 It's made clear that Psylocke used her telepathy to make the rest of the X-Men okay with entering the Siege Perilous, explaining away how quickly they all agreed to the idea.

Before then, though, Havok contemplates calling it quits anyway, and there's no reason to believe those aren't his own thoughts. 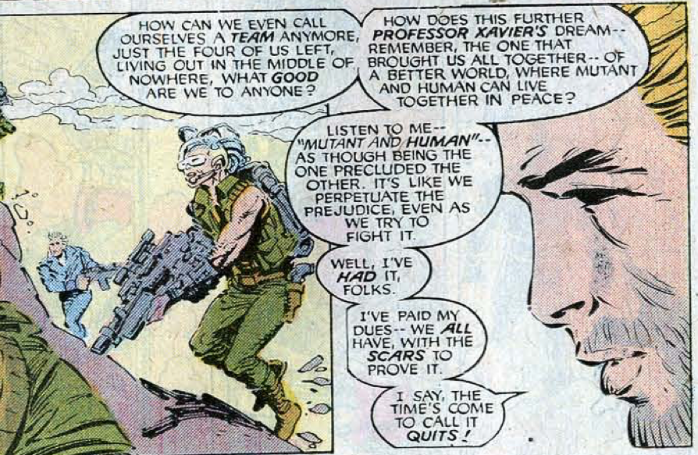 Pierce crushes the physical manifestation of the Siege Perilous, ending its role in the book as well. 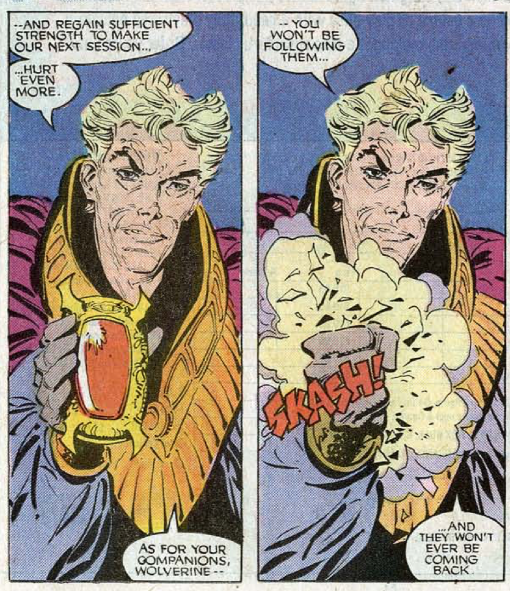 It's in the Mail
A rather lengthy letter runs down all the lingering and unresolved plot lines in the book, pointing out many of the things we've pointed out here.

Teebore's Take
Without a doubt, this issue, wrapped in one of the series' most iconic covers, is the centerpiece of the "Dissolution and Rebirth" storyline, and functions as the climax to the "dissolution" half of the plot, with the four remaining X-Men entering the Siege Perilous and disappearing, effectively disbanding the X-Men just as Wolverine returns to bear the full brunt of the Reavers' revenge. Of course, Claremont's telling of those events is much less straightforward, as he begins the issue in media res, with Wolverine already a captive of the Reavers and the rest of the story, including the X-Men's disappearance, told via a surreal mix of Dreamtime flashbacks and fever dreams that help sell Wolverine's overall disorientation. Just like the character, readers aren't sure what's real or imagined throughout the story, and in true suspense movie fashion, Claremont, Silvestri and Green keep the details of the Reavers' torture of Wolverine off panel, conveying instead the extent of the violence performed on him via the Reavers' glee and Jubilee's horror. It's an effectively intense depiction of one of the series' darkest moments yet, and a great kickoff to a truly unusual and unique era for the book.

Next Issue
Tomorrow, a religious interlude in New Mutants #81. Friday, more fun on an alien world in X-Factor #46. Next week, the Reavers hunt for Wolverine in X-Men #252.
Newer Post Older Post Home
Posted by Austin Gorton at 12:00 PM