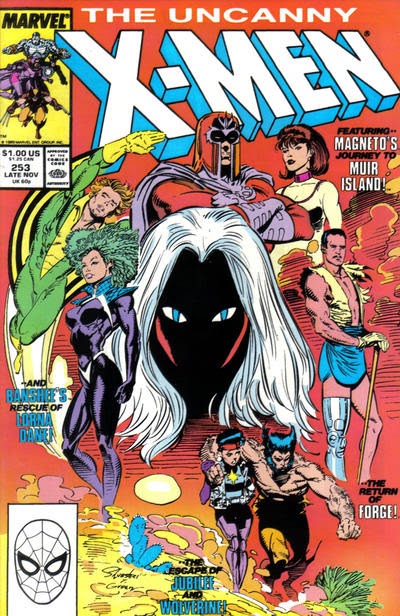 In a Nutshell
A young Storm turns up in Illinois, Polaris comes to Muir Isle, and Forge begins searching for the X-Men.

Plot
In flood-ravaged Cairo, Illinois, an unconscious young African-American girl is found at a levee by Jacob Reisz, the local FBI station chief. She is taken to the hospital just as the storm breaks. In Australia, the Reavers search for Wolverine and Jubilee. Back in Cairo, Dr. Shen and her colleagues discover the young girl doesn't appear on any of their instruments, leading Shen to believe she's a mutant. On Muir Isle, Moira MacTaggert argues with Magneto, then sends Callisto to seal off the remnants of Xavier's mansion. In Australia, Pierce, having accepted that Wolverine has somehow escaped, questions Lady Deathstrike on his possible destinations. Back on Muir Isle, Banshee hears a distress call from a freighter caught in a storm in the Atlantic, and when he flies out to help, he rescues Lorna Dane from the sinking ship, where the entire crew had turned murderous fighting over her. 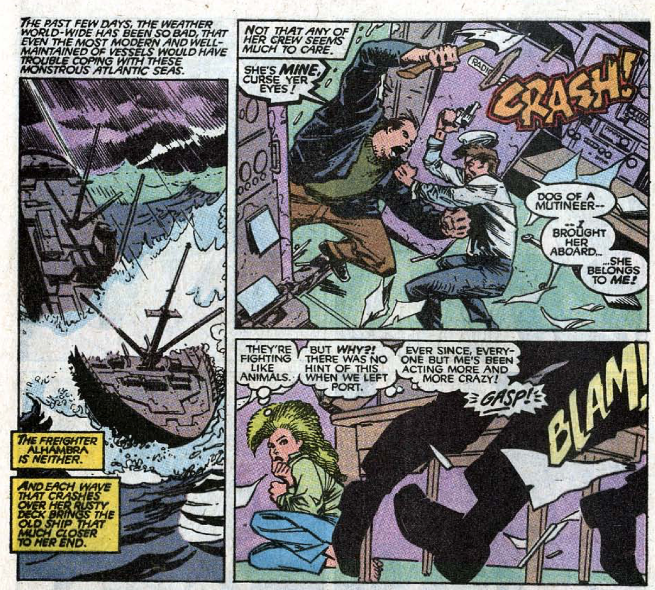 Meanwhile, at Excalibur's lighthouse, Amanda Sefton arrives looking to make amends with Nightcrawler, but is met instead by Brigadier Stuart, who tells her Excalibur has gone missing. In Yellowstone, a meditating Forge slips into a vision in which he meets Amahl Farouk, who is holding Storm in a cage. As Forge watches, Storm grows younger. Farouk tries to possess Forge until Forge punches him with his bionic hand. Forge wakes up, his hand destroyed, but suddenly knowing that Storm is alive, but in danger. In Cairo, a seemingly-deceased Jacob Reisz answers Dr. Shen's call about the young mutant girl, and he agrees to handle the situation personally. In Australia, Pierce tells the Reavers he's decided Muir Isle is Wolverine's most likely source of safe harbor, so he wants the island leveled, every mutant found there slaughtered, and most importantly, for they represent the biggest threat to his ambitions, Banshee and Moira killed.

Firsts and Other Notables
Kid Storm makes her first appearance in this issue, popping up in the center of a huge storm centered around Cairo, Illinois, the first indication we get that perhaps Storm isn't dead after all. The mystery of how Storm turned into a kid will linger for awhile, she won't get her memories back for even longer, and it won't be until "X-Tinction Agenda" that she's reverted to adulthood, but this technically marks the first "rebirth" for the dissolved X-Men, and Kid Storm will be one of the recurring narrative threads the series follows during this "non-team" era. 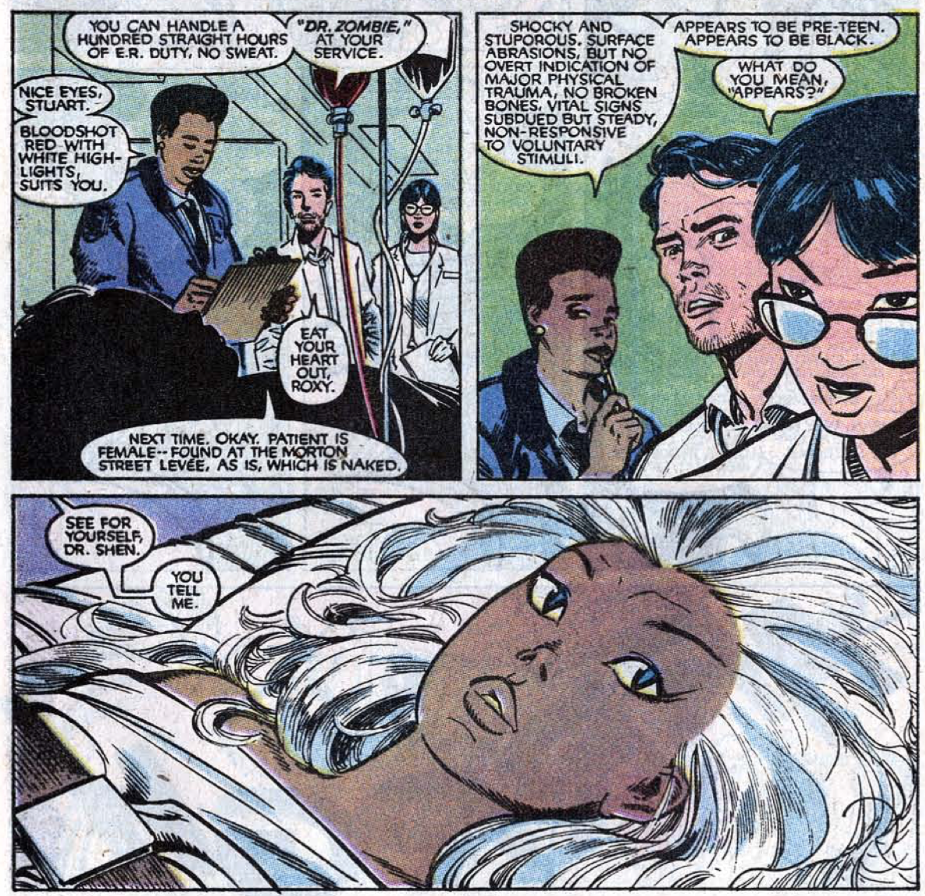 Also, reading this issue as a kid taught me there was a Cairo in Illinois.

Along with Kid Storm, Jacob Reisz, an FBI agent, and Lian Shen, a doctor, both make their first appearances. Jacob then dies of a heart attack at the end of the issue, his body taken over, we'll eventually learn, by the Shadow King. Both Reisz and Shen will continue to play a role in the Shadow King/Kid Storm subplot moving forward. 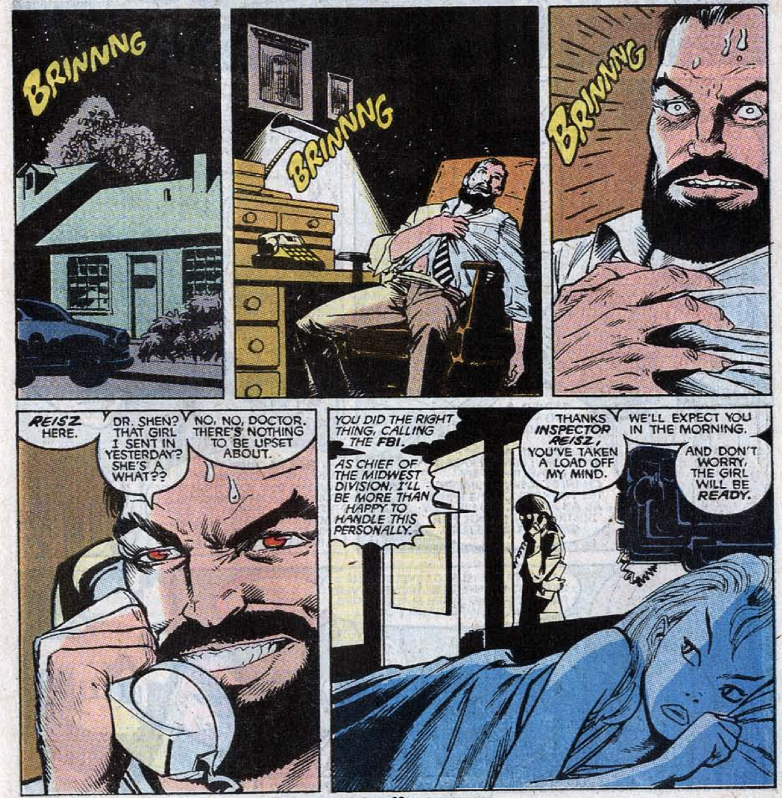 Lady Deathstrike spots Wolverine and Jubilee leaving the X-Men's Australian base, but she declines to shoot them or alert Pierce, as she prefers to defeat Wolverine when they can meet as equals. This marks the last time we'll see the X-Men's (now former) Australian base for awhile (and when we do see it, it'll be a Reavers base again), while Wolverine himself takes another break from the series, and won't appear again until issue #257. 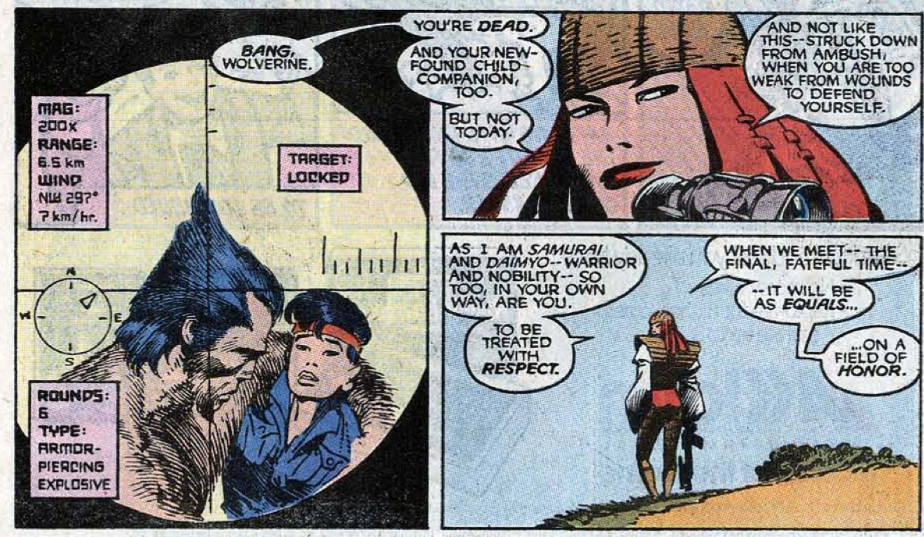 Via a scene between Magneto and Moira, Claremont addresses the "I was evil all along!" Magneto retcon from New Mutants #75. Magneto rightly points out that joining the Hellfire Club was as much Storm's idea as his (something that issue conveniently failed to mention), and says that, with the X-Men dead and the New Mutants missing (and wanting nothing to do with him), there's no point filling in for Xavier anymore, and that any recent villainous actions on his part are merely an attempt to draw the focus of anti-mutant sentiment to him, so it won't be placed on other mutants. 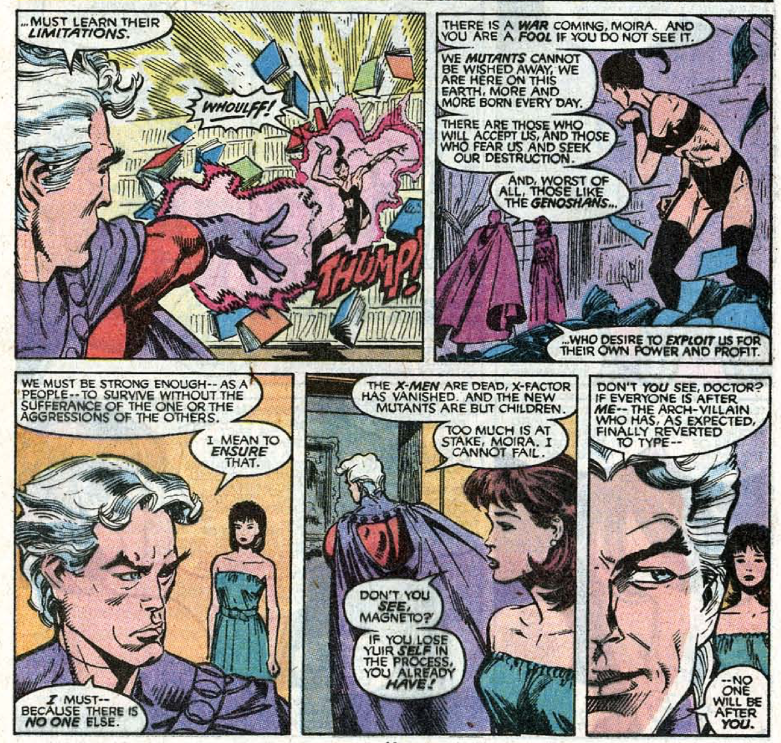 It's a rather brilliant retcon to a retcon, allowing everyone to have their cake and eat it too. For those fans who, like John Byrne, prefer the cackling, one dimensional Magneto who was starting to appear in more and more comics around this time, then that's what he is. For those who prefer Claremont's more developed, nuanced portrayal of the character, here's an explanation that reconciles the seemingly disparate portrayals without fully invalidating either.

In their conversation, Magneto mentions a coming war involving mutants, possibly a reference to the "Mutant Wars" storyline which will be teased in Marvel Age but never actually come to pass (it was supposed to occur at the time "X-Tinction Agenda" was published). Without knowing about the aborted storyline, it just reads like more of the usual "man and mutant are destined to battle one another for supremacy" routine. Magneto also mentions Genosha for the first time, significant given what that country must mean to someone like Magneto and given his future involvement with it.

Moira, appearing in the series for the first time since issue #230 (though we've seen her elsewhere since then, notably when she was replaced by her Nazi counterpart in Excalibur), declares her intent to find the New Mutants and secure Muir Island against attack. She never quite succeeds in the former, but her efforts towards the latter (and their level of success) will form the central narrative of the next two issues, and her subsequent "Muir Island X-Men" will become another narrative thread followed by the series.

Along with Moira, Banshee returns to the book, appearing for the first time since issue #217 (we last saw him in Marvel Comics Presents #24, the end of the Cyclops serial), and using his powers for the first time since they were damaged in issue #119. Though we know he was healed by the Retribution Virus in Marvel Comics Presents, he uses them here without explanation, or a footnote to that story.

Moira sends Callisto to seal off the remaining subbasement levels of the X-Mansion, to prevent Magneto and anyone else save herself, Moira, Banshee or Professor X from accessing them. This effectively gets Callisto off Muir Isle (where she's been since shortly after "Mutant Massacre"), away from the upcoming Reaver attack, and back in New York, where she'll remain moving forward, continuing to appear in a supporting fashion on occasion, but in a much different way than as Moira's bodyguard. 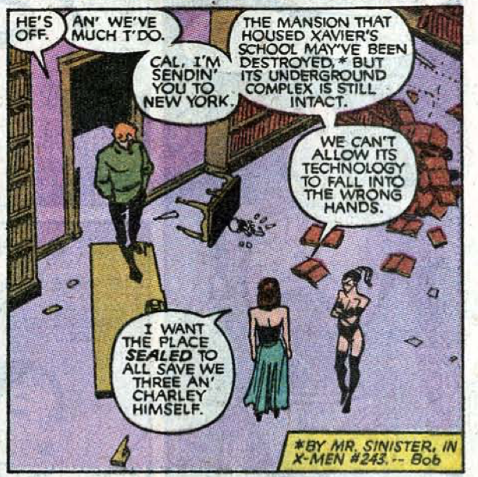 Polaris returns to the series as well, following her appearance during the Savage Land arc in issues #249-250. She will remain a recurring presence in the book as one of the Muir Island regulars all the way up to Claremont's departure and the linewide reshuffling in 1991 (when she'll join the new iteration of X-Factor). She is rescued by Banshee from a freighter in the Atlantic, the crew of which has become murderous in fighting over her, triggering another bout of super-strength and growth for her, another tease at the idea that her new powers trigger negative emotions in those around her, which she then absorbs and converts to physical mass and power. 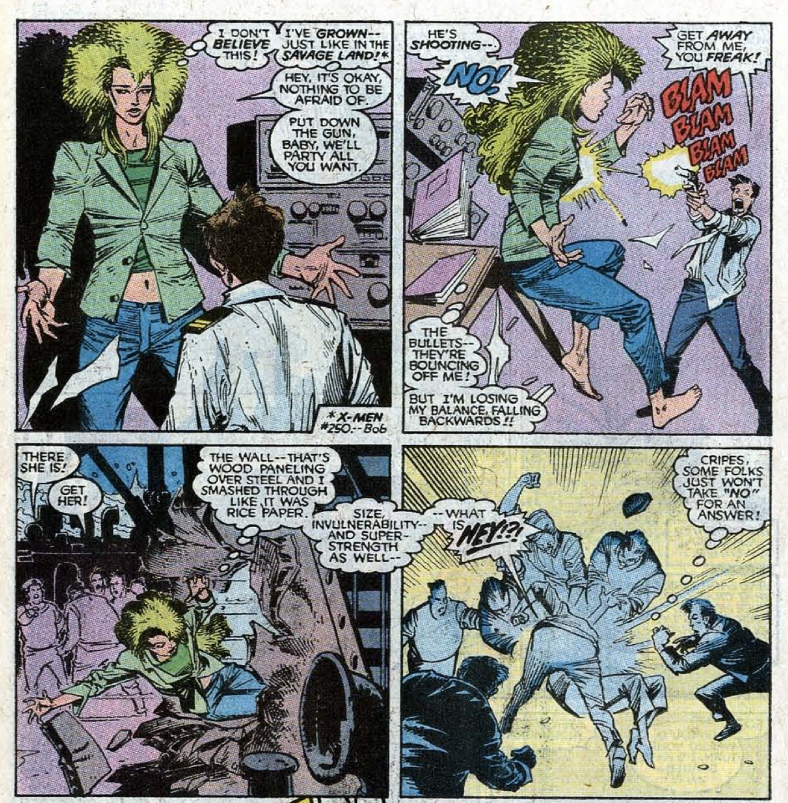 The reunion tour continues, with Amanda Sefton, last appearing here in issue #206, popping up as she checks Excalibur's lighthouse for Nightcrawler, hoping to make amends. There she meets Excalibur supporting cast member Brigadier Stuart, who informs her of Excalibur's disappearance in "The Cross Time Caper". Like Lorna, Amanda will remain a fixture of the Muir Island portion of the narrative moving forward. 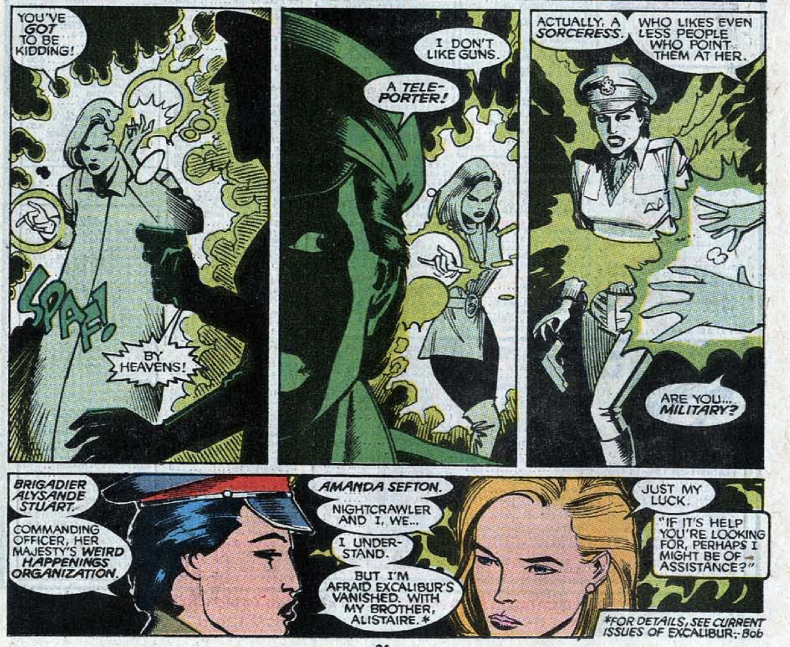 Finally, Forge returns, last seen in issue #227 (with his appearance in New Mutants #65-66 falling between that issue and this one). He encounters, via a Vision Quest, the Shadow King in his Amahl Farouk guise (just as Professor X did in issue #117), marking that villains first appearance in the series since that issue (though the New Mutants tangled with him when he was possessing Karma). Forge, along with Banshee, will form a fourth narrative thread for the book to follow in the non-team era, while the Shadow King will gradually be positioned as the chief antagonist of this run of issues, leading up to the "Muir Island Saga" (and, had Claremont stayed, he had plans for the villain beyond that storyline as well).

In Forge's encounter with the Shadow King, he sees both Kid Storm, realizing she's still alive, and Jacob Reisz, hinting at Shadow King's eventual possession of his body. He also sees Gateway chained up outside the saloon, a hint at Claremont's plan to tie Gateway and the Shadow King together, something else which never came to fruition. 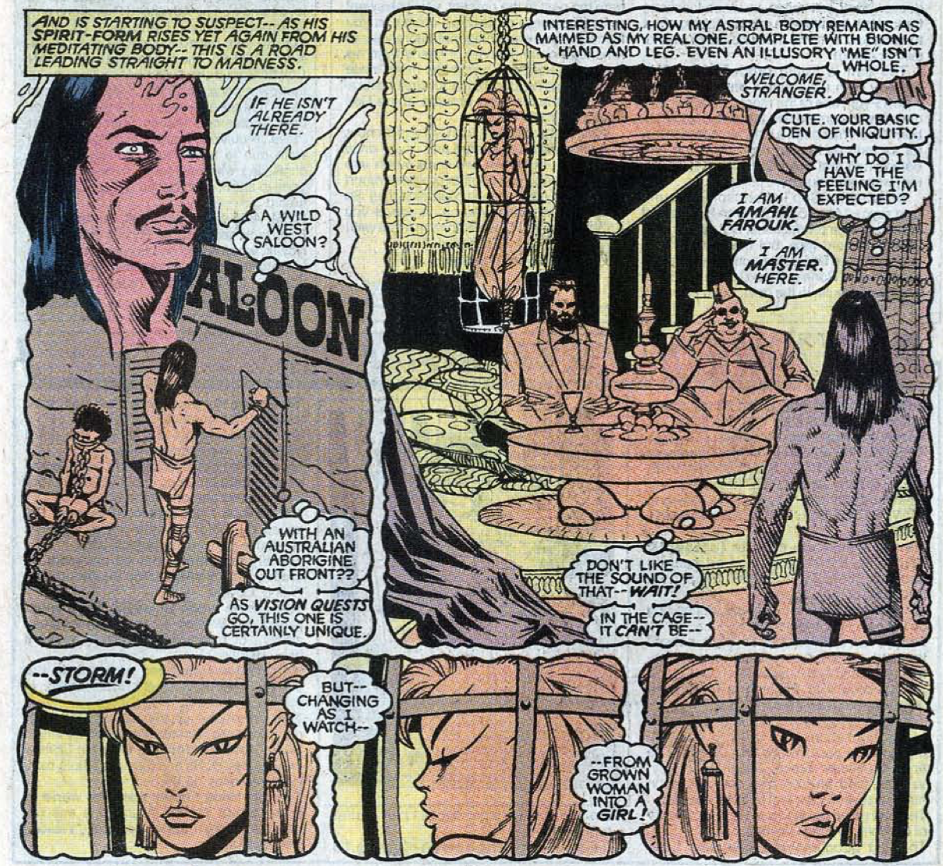 Steve Leialoha fills in on inks. I like his work generally, and more elsewhere, as he seems to dull Silvestri's edge a bit, so to speak, in this issue.

Like issues #125 and #139, this is another classic "see all the varied stuff happening in this issue!" cover that you just don't see often enough anymore.

A Work in Progress
Kid Storm is said to be an amalgamation of rare racial elements, including "oriental". 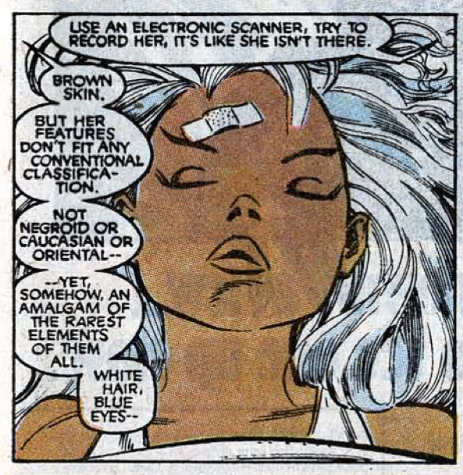 This issue points out just how scattered all the various mutant teams are, with the New Mutants, X-Factor and Excalibur's current off-world adventures all referenced.

Lady Deathstrike erroneously refers to Wolverine's foster daughter Amiko as "Akikko", a common error (I honestly think Claremont forgot the name, and his editors just assumed he was right).

Polaris notes that Banshee can't talk and scream at the same time, something which makes sense but which I don't think has always been consistently depicted (and won't always be adhered to moving forward). 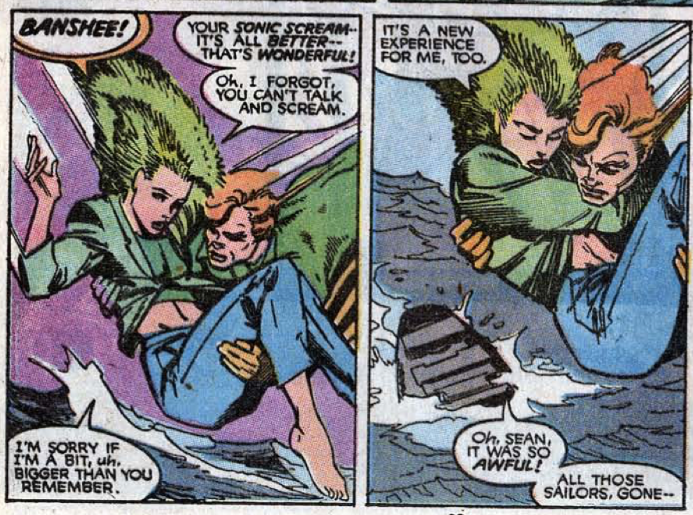 The Reavers, meanwhile, still believe Banshee to be powerless. 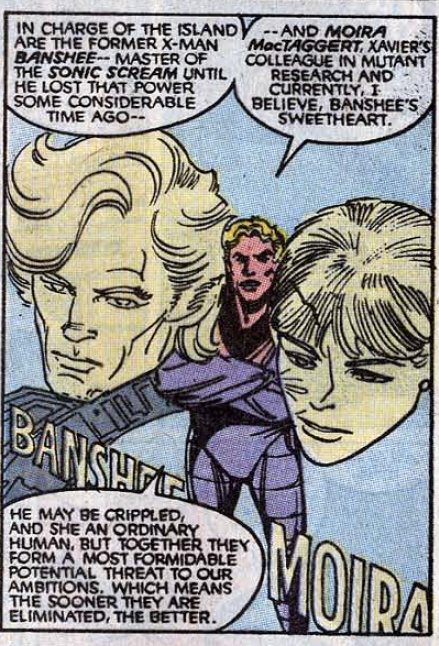 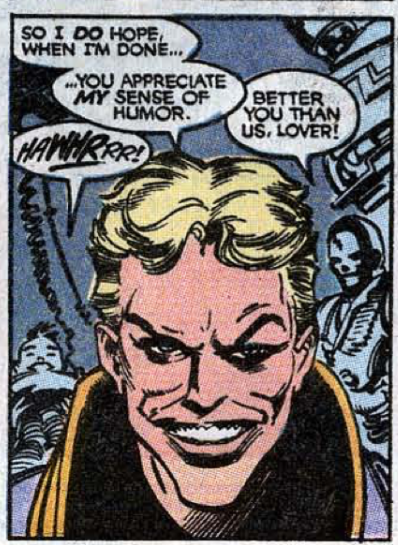 It's in the Mail
A note in the letters column thanks the fans for all the Comic Book Buyers Guide awards the series and its creators won. 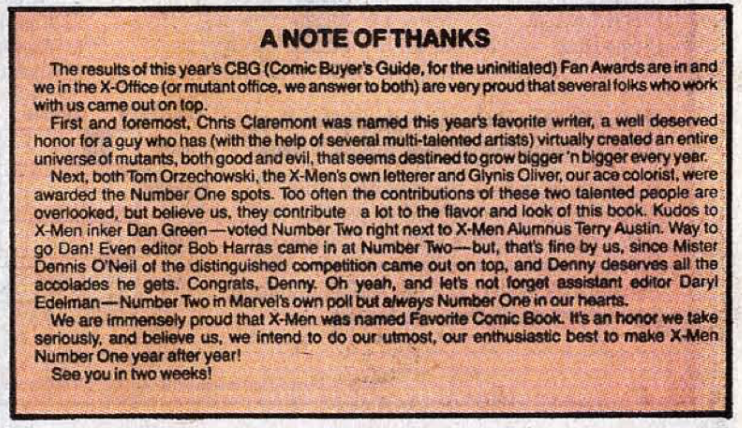 Teebore's Take
A Classic Claremont Quiet Issue, this is the pivot point between the "dissolution" and "rebirth" arcs of this story. With all the X-Men (save Wolverine) presumed dead and/or missing, it transitions the narrative away from the breakup of the X-Men, and begins planting the seeds for the rebirth of the team via four different groups who will share the focus of the series for the next year plus: Wolverine & Jubilee, Banshee & Forge, Kid Storm, and the inhabitants of Muir Island. In doing so, Claremont is also laying the groundwork for stories that will, essentially, carry him all the way up to his departure from the series (and which were meant, had he stayed on the book, to carry the series all the way up to issue #300).

In and amongst all that short and long term setup, Claremont also takes the times to reintroduce and/or reorient a bunch of characters long-absent from the series (Banshee, Forge, Amanda Sefton, Moira & Callisto), and even addresses the Simonson/Byrne retcon of Magneto from New Mutants #75, offering up an elegant explanation which both maintains Claremont's more rounded vision of the character but still allows for the more one-dimensional, traditional appearances of the character in other books around this time. While it lacks the visceral intensity and loopy imagery of #251 or the explosive action of the upcoming #255, this is arguably the most important issue of this story arc, and, for the way it sets up so much of what's to come, of the entire post-"Inferno" run thus far.

Next Issue
Tomorrow, the New Mutants continue to bumble their way through Asgard in New Mutants #82, and Friday, Archangel gets the fill-in treatment in X-Factor #47. Next week, the Muir Island X-Men make their first appearance in Uncanny X-Men #254.