Plot
Early one morning, Dazzler seemingly tries to seduce Wolverine, but it's actually Serpent Society member Diamondback, her consciousness having been switched with Dazzler's. Elsewhere, Storm goes over the recording of Dazzler and Diamondback's story, trying to decide what course of action to take. After the Serpent Society was hired by Deviant priest Ghaur and his ally Lyra to find specific items of arcane power, Diamondback was captured trying to steal one of the items from the mystic Mr. Jip. Wanting the items for himself, Mr. Jip captured Dazzler, transferring the minds of the two women in order to blackmail the X-Men into finding the items for him. Unwilling to be blackmailed, Storm decides to take the fight to Mr. Jip and force him to restore Dazzler to normal, but when Gateway tries to teleport the team to him, Jip casts a spell that scatters the team to the locations of the various artifacts. 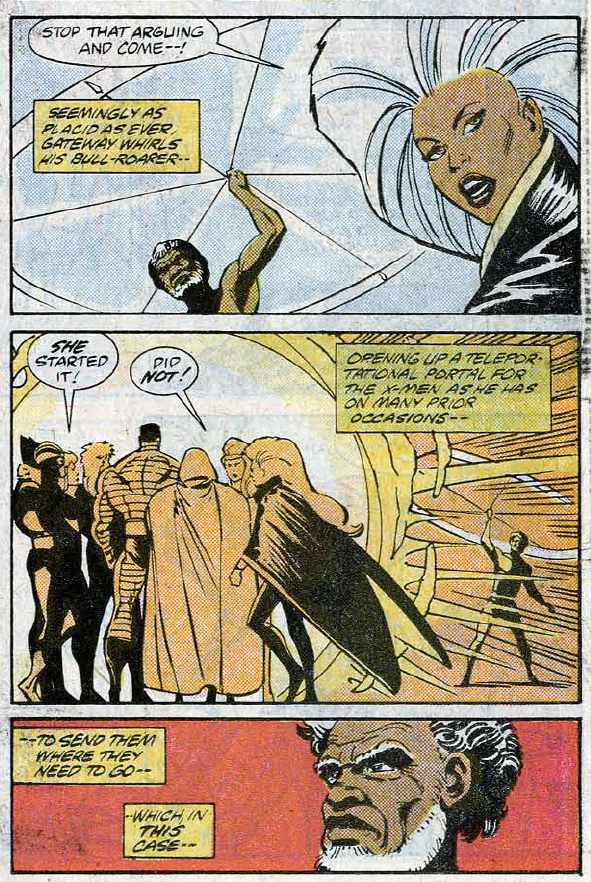 2nd Story: "Jubilation Day"
Following the female X-Men through their teleportation portal back to the X-Men's Outback town, Jubilee is directed by Gateway to a tunnel that leads into the Reavers' former treasure trove beneath the town. From there, she secretly gains access to the town and its various underground tunnels and facilities, and begins observing the X-Men, taking food and clothing from them as needed. One night, after swimming in the underground lake, she's attacked by a cyborg dingo, but is able to destroy it by using her fireworks against it. Surprised at the destructive capabilities of her power, Jubilee nonetheless feels a renewed confidence in herself, as though she passed a test and can handle whatever comes next.

Firsts and Other Notables
Depending on how integral you consider annuals to be in terms of a series, this issue is notable for being the only issue of X-Men to not be written by Chris Claremont during his run on the title (at the very least, it's the only annual not written by him during his tenure), as former X-Men inker and current Cloak and Dagger writer Terry Austin steps in to write the main story, featuring a villain from his C&D book, Mr. Jip (who is trying to disrupt Ghaur's plans because Jip knows that Dagger is destined to be one of Ghaur's Brides of Set, which will disrupt Jip's plans for the woman).

In addition to Mr. Jip, this issue features the Serpent Society, a group of snake themed villains with a variety of powers/gadgets who operate more like a labor union than a traditional team of villains. One of the members, Diamondback, who features heavily in this issue, eventually becomes a partner/love interest for Captain America in his series around this time.

This issue marks the first X-book contribution to "Atlantis Attacks", a storyline which, like the previous year's "Evolutionary War", unfolds across all of Marvel's annuals. It involves the machinations of the Deviant priest Ghaur to restore the Serpent Crown, a powerful mystical object, and summon forth the demon god Set. Like "Evolutionary War", each annual includes a historical backup story, this time featuring the history of the Serpent Crown. Unlike the previous year's story, however, the various chapters of "Atlantis Attacks" are more interconnected and build on one another more from issue to issue, though as a whole this crossover of annuals is generally considered inferior to the previous one. It is also the last such annual crossover, as next year Marvel will switch to using its annuals to tell multiple smaller stories across specific groups of titles.

The second story in this issue features Jubilee and show's her arrival in the X-Men's town following issue #244. In the course of the story, she comes across the Reavers' former treasure trove, the underground lake and discovers a small room hidden in the X-Men's base that she claims as her own; we'll see it again in future issues of X-Men shortly. 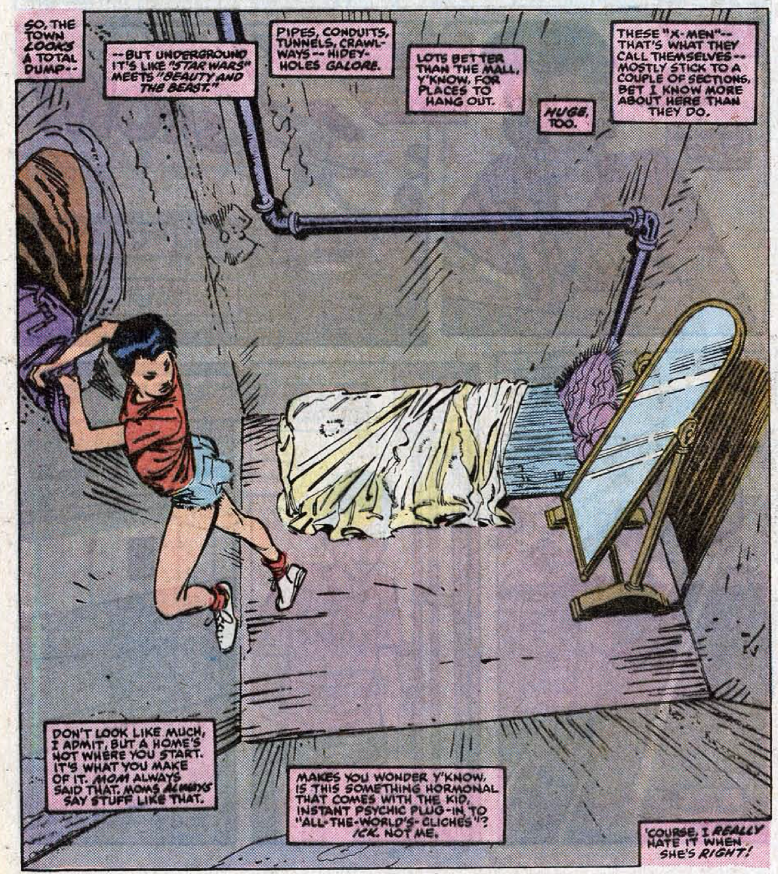 She also assembles a costume of sorts from purloined pieces of various X-Men uniforms, which will be her default look until she adopts her more classic shorts/yellow trenchcoat attire. She does acquire her trademark shades in this issue, though. 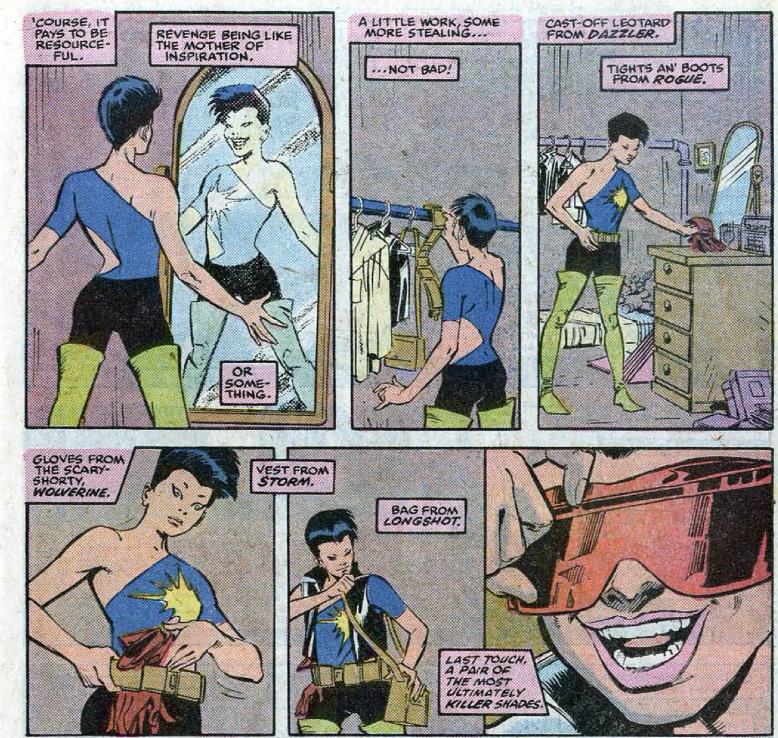 It's revealed that Jubilee's parents are dead, the details of which will be dealt with in future issues of Wolverine. 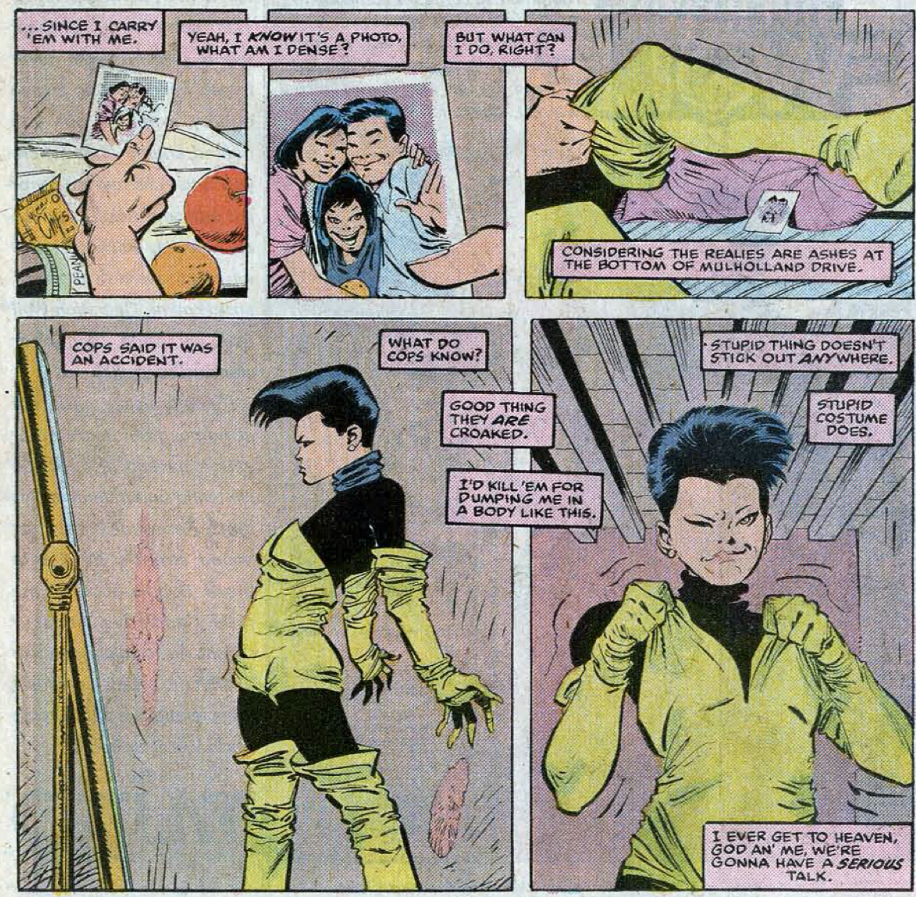 At one point in the second story, a bag of Jubilee's mysteriously disappears, and later, the picture of her parents falls down in her room. I can't remember what, if anything, these strange occurrences are setting up.

Gateway speaks to Jubilee in the second story, confirming he is capable of speech. It is one of the few instances in the character's history in which we see him speak. 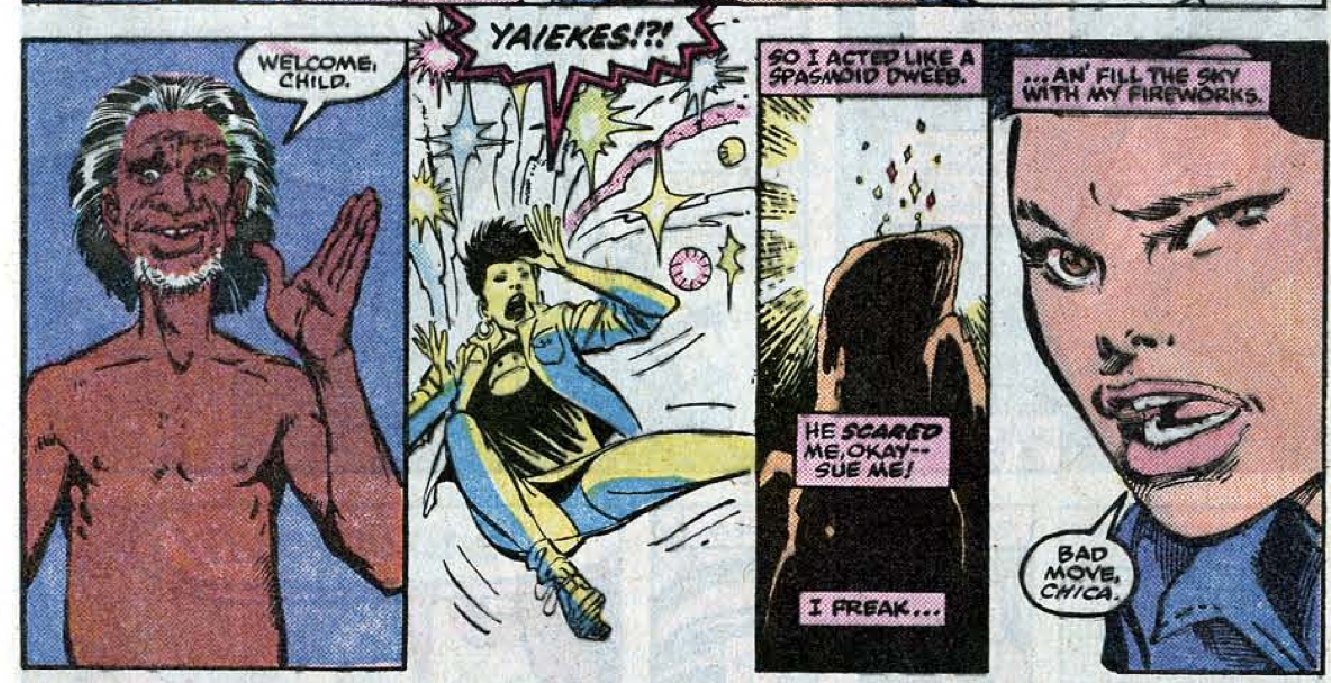 "Jubilation Day" is the only story credited to Sally Pashkow, and reportedly, "Sally Pashkow" is just a pseudonym used by Claremont for the story as a joke.

Mike Vosburg provides the art for the main story. I know his work primarily from Marvel's G.I. Joe, and while I wouldn't say I love it, I like it much more there than here.

The Chronology Corner
Storm will appear in later chapters of the crossover, as one of the "Brides of Set"; all of her appearances there occur between this issue and #246.

The second story in this issue occurs immediately after issue #244.

A Work in Progress
It's suggested that so long as an individual knows their destination, Gateway can teleport that person there.

Ghaur is seen to be operating out of Magneto's old Bermuda Triangle island base at the end of the issue. 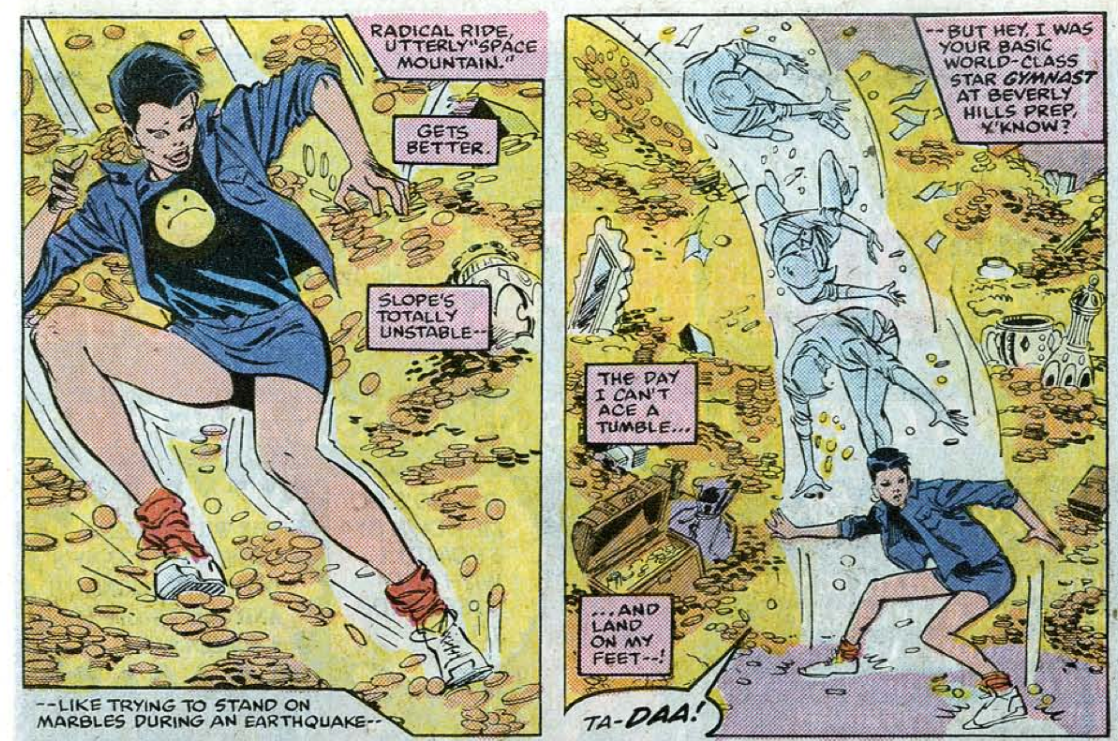 The X-Men are watched playing baseball by Jubilee. 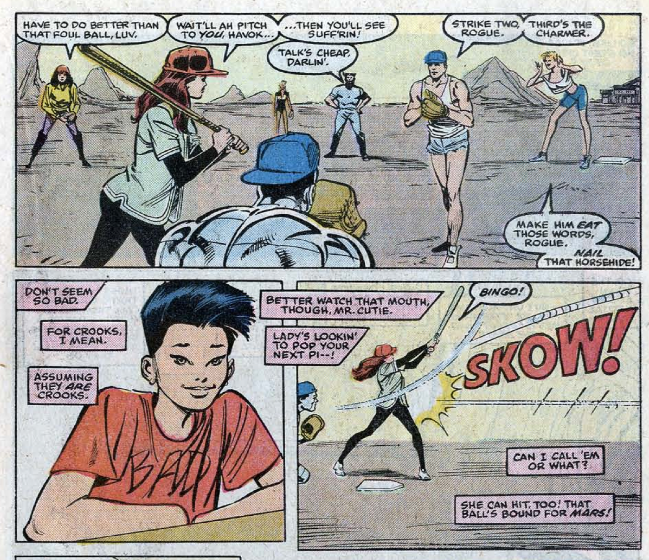 Teebore's Take
After a string of reasonably strong annuals ranging from "decent" to "all time great", we're back to the kind of dreck we'd come to expect before Art Adams started drawing these things. "Atlantis Attacks" has never done much for me as a story (like Marvel's various subterranean races/cultures, my eyes start to gloss over as soon as we get too deep into the various undersea factions: Atlanteans, Lemurians, Deviants, Ghaur...Namor I can handle and that's about it), and there's nothing about this particular chapter that requires the presence of the X-Men: the Serpent Squad can be a fun group of villains in terms of their theme and their business-like approach to supervillainy, but any group of heroes could have been the ones racing against them to acquire these artifacts and complete this chapter of the larger story. Combine that with a lackluster creative team that makes it seem like someone forgot there needed to be an annual and just grabbed anyone who was free at the time, and the whole story feels like an afterthought.

Most of the X-Men-specific stuff then falls to the second story, featuring the immediate aftermath of Jubilee's arrival in the X-Men's town. It's nothing spectacular, but it's definitely the better of the two stories, giving readers a chance to get know Jubilee and see the X-Men from the perspective of an outsider. The battle with the cyborg dingo is a completely unnecessary nod to the conventions of the time, but that aside, the second story at least keeps this annual from being a complete waste of time even if it unfortunately can't quite propel the whole thing above the level of "thoroughly mediocre and mostly forgettable."