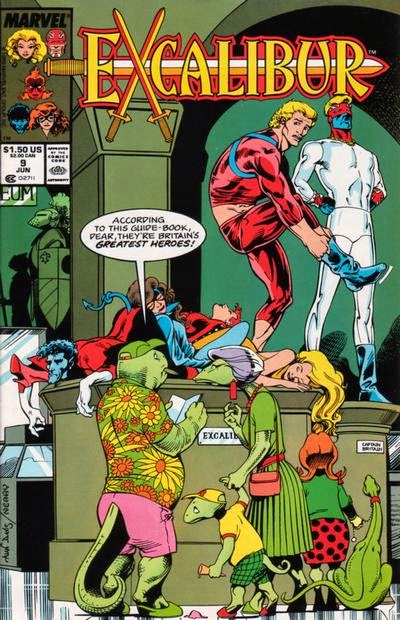 In a Nutshell
Excalibur battles their Nazi counterparts from an alternate world.

Plot
At Excalibur's lighthouse, Lockheed is attacked by the Lightning Squad, alternate reality counterparts of Excalibur seeking their Moira MacTaggert and Callisto. Meanwhile, in the subbasement of the X-Mansion, Kitty tests Brian's powers, finding his abilities to be far below their normal levels, while Meggan is unconsciously shifting her form to reflect the appearance of anyone near her. Just then, Nightcrawler receives a call from Commander Thomas, asking for Excalibur's help. At the London Branch of the Hellfire Club, Nigel Frobusher is drawn into a series of wagers with his boss, Courtney Ross. Unwilling to risk looking like a coward to the gathering crowd, he ends up owing her a million pounds. At the WHO headquarters inside the Tower of London, Widget appears and swaps a group of tourists for their lizard-like counterparts from another reality as the Lightning Squad infiltrates the building. 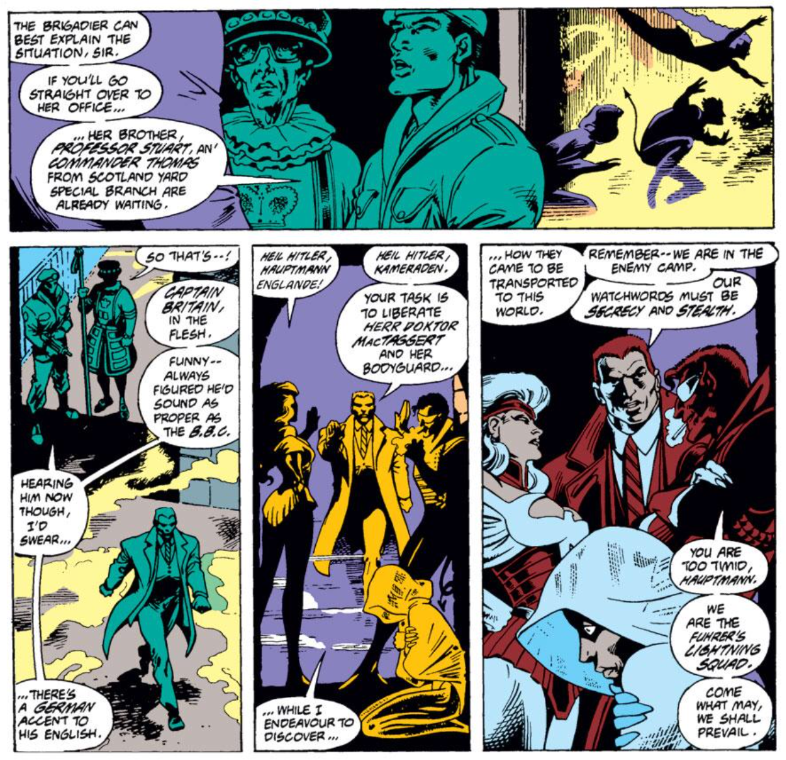 As the rest of the team frees Moira and Callisto and captures Alysande Stuart, their leader, Hauptman Englande, confronts Commander Thomas. But Thomas is saved by the timely arrival of Shadowcat and Phoenix. As Phoenix reads Hauptman Englande's mind, Shadowcat is confronted by her counterpart and knocked out, which distracts Phoenix enough for Hauptman Englande to get the drop on her. Telling Meggan and Captain Britain to stay back due to their fluctuating powers, Nightcrawler attacks Hauptman Englande, but is overpowered by his own counterpart. However, as the Lightning Squad emerges from the Tower, they find themselves confronted by a waiting Captain Britain.

Firsts and Other Notables
The Lightning Squad, Excalibur's counterparts from the alternate Nazi reality, appear for the first time this issue. Notably, they are missing a Phoenix analog, which is a hint towards the notion that Rachel is unique in the multiverse (in that there is only one of her in the main 616 universe, and no alternate reality counterparts), an idea Claremont intended to establish at some point but never got around to doing, and has since been disproved. 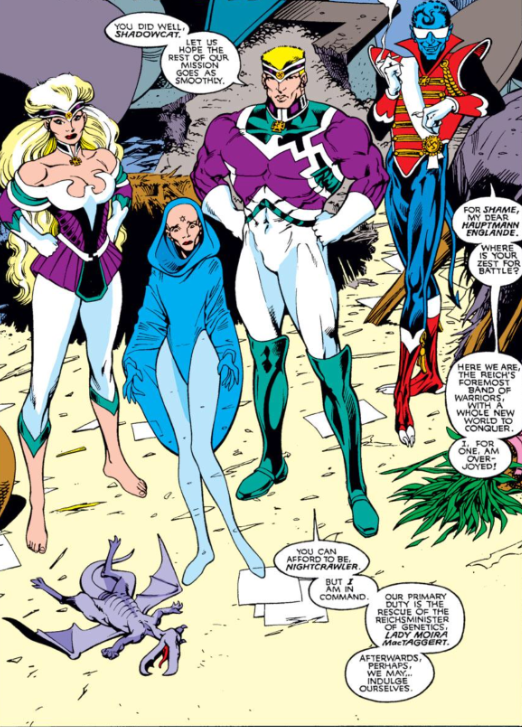 In a subplot scene involving Nigel Frobusher and Sat-yr-9-as-Courtney-Ross (aka Fake Courtney Ross), we see the London branch of the Hellfire Club for the first time. And I have no idea where this subplot is going, but Nigel ends up in big debt to Fake Courtney. 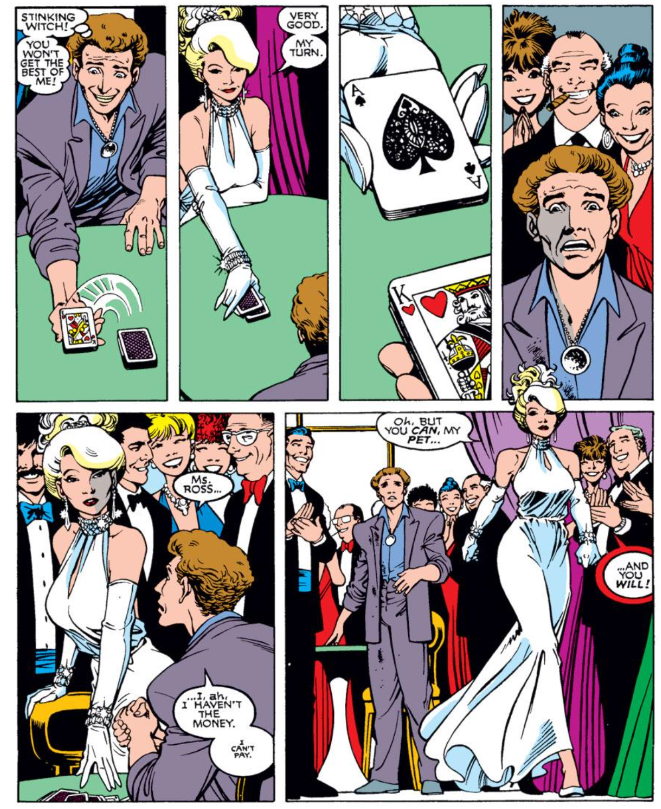 It's established that WHO headquarters is in the Tower of London.

A Work in Progress
Kitty tests out Brian's powers in the X-Men's old gym, in the underground portion of the mansion that survived the explosion in X-Men #243. It's been so long since we've seen anybody at the school, it was enjoyable and almost quaint to see these characters hanging out in that old familiar setting. 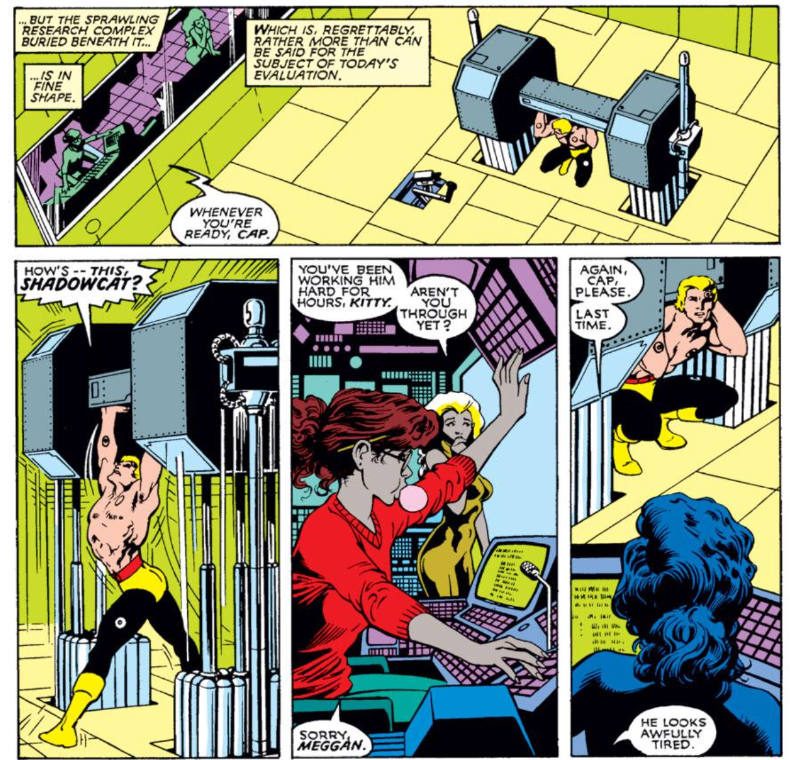 Meggan's powers have reached a point where she's basically a chameleon, unintentionally mimicking the appearance of anyone who gets near her.

Remember when Kitty threw a fit over having to wear glasses? In a nice visual bit of continuity, she's wearing them this issue while running the tests on Brian.

Widget pops up again, now over a door in the Tower of London, still looking for Colin. He ends up swapping a group of tourists for, apparently, their counterparts from an alternate lizard dimension. 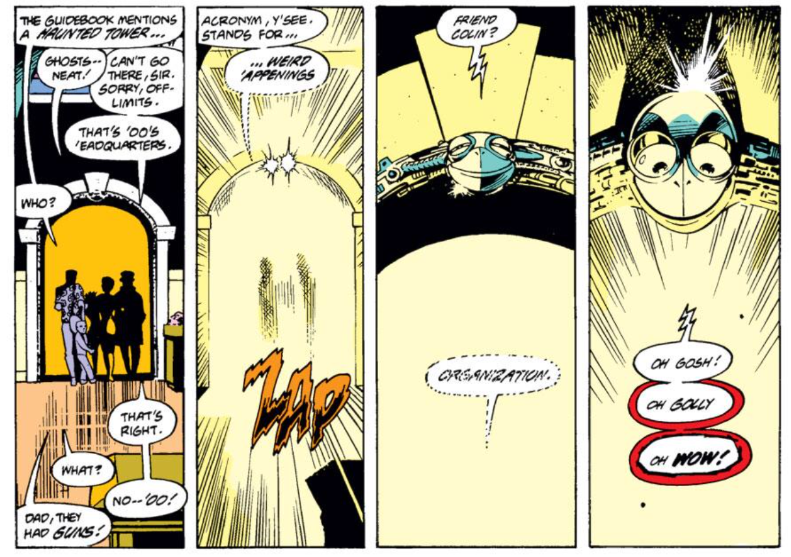 Still without a costume, Brian dons the old Captain Britain uniform on display at the Tower of London. It's a big snug, much to the derision of Hauptman Englande. 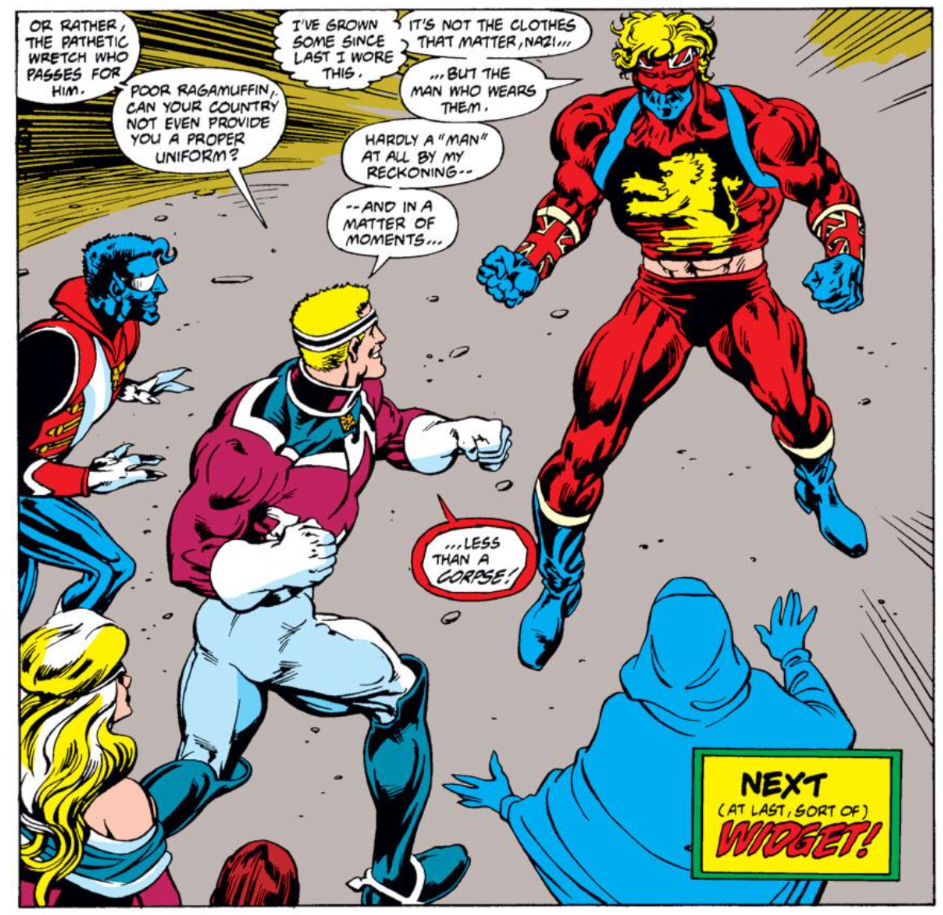 Artistic Achievements
In a neat visual moment, the Phoenix firebird effect is depicting as eating the head of the person whose mind Rachel is reading via telepathy.

Teebore's Take
In the grand history of Claremont plot danglers, the subplot involving Widget and the Nazi counterparts of Moira and Callisto from an alternate dimension are hardly worthy of mention in terms of time left dangling, but this issue nevertheless feels like a good time to move that story from "subplot" to "plot". That transition, along with a few pages spent on a running character bit (Brian and Meggan's power issues) along with the introduction of a new subplot (whatever the heck is going on with Nigel and Fake Courtney Ross) combine for an issue that feels the most yet like a classic Claremont issue of X-Men, while some of the little touches (like the WHO/who? gag involving the tourists and Captain Britain's ill-fitting costume) give the issue a dash of the series' typical whimsy. Plus, there's the added fun of Excalibur fighting their alternate reality Nazi counterparts, and battles against alternate reality Nazi counterparts are always good comics.