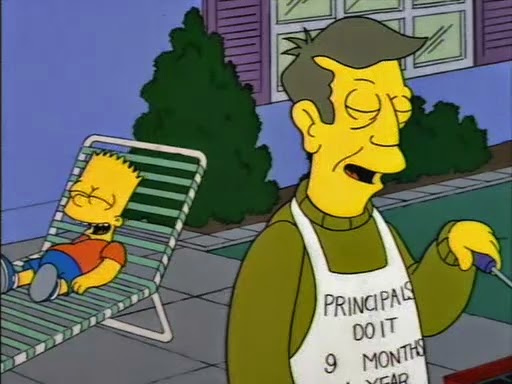 Or the One Where
Principal Skinner gets fired.

The Setup
After Bart brings his dog to school for show-and-tell, Santa's Little Helper escapes into the school's air ducts, creating a commotion that results in Superintendent Chalmers firing Skinner.

Notable Notes
This is the show's one hundredth episode. Though this episode wasn't conceived as such, it was selected to air in that position because the staff wanted an episode which featured Bart to be the 100th.

It is also packed with a ton of firsts. Assistant Superintendent Leopold appears for the first time (a character built around one specific gag, in that he's tough and menacing but never in a position of power), and he'll pop up again in a later episode.

We see Flanders' parents for the first time, a pair of beatniks who will appear again via flashbacks as well as an episode in which they befriend Homer.

Though unnamed in this episode, Gerald, the baby with one eyebrow, makes his first appearance, and we learn of his enmity with Maggie. Gerald was featured in the Oscar-nominated theatrical short "The Longest Daycare" and was added to the show's title sequence when it was redesigned as part of the show's move to HD.

Finally, this is the first appearance of Luigi, the stereotypical Italian restauranteur and his eponymous restaurant. Though he's yet to feature heavily in an episode, he and his restaurant have popped up numerous times throughout the history of the show.

The opening of the episode parodies the opening credits of The Wonder Years and the title is a reference to the film Sweet Sweetback's Baadasssss Song.

Mrs. Krabappel's exclamation of "Ha! It thinks it's people!"to Santa's Little Helper is another line I often repeat, usually whenever my various pets are doing human-like things. 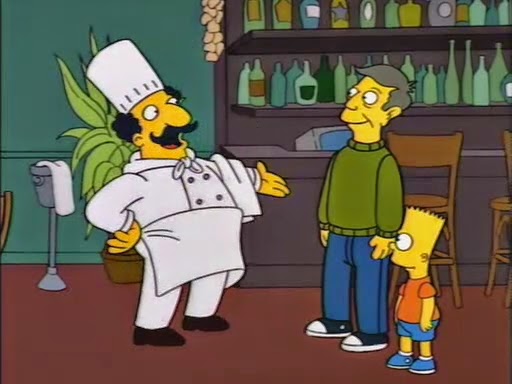 Ralph: Um, Miss Hoover? There's a dog in the vent.
Miss Hoover: Ralph, remember the time you said Snagglepuss was outside?
Ralph: He was going to the bathroom.

Principal Skinner: I know Weinstein's parents were upset, uh, superintendent, but, but -- but I was sure it was a phony excuse. I mean, it sounds so made up: "yom kip pur".

Superintendent Chalmers: Oh, I have had it, I have had it with this school, Skinner! The low test scores, class after class of ugly, ugly children!

Bart: It's weird, Lis: I miss him as a friend, but I miss him even more as an enemy.
Lisa: I think you need Skinner, Bart. Everybody needs a nemesis. Sherlock Holmes had his Dr. Moriarty, Mountain Dew has its Mello Yellow, even Maggie has that baby with the one eyebrow.

Skinner: What's he doing here?
Bart: Well once he found out we were going to get Ned Flanders fired, he insisted on helping.
Homer: That is true. 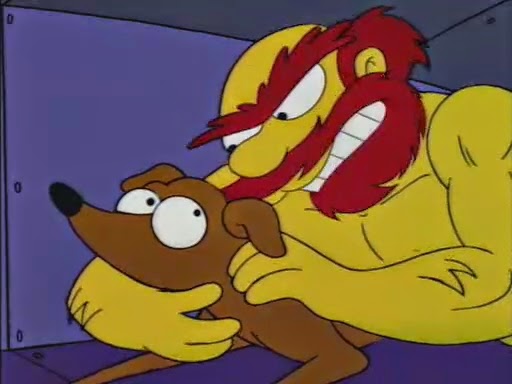 Teebore's Take
Even for a show that just began it's 26th season, one hundred episodes is a notable number. It's traditionally tied to syndication viability, and considered a benchmark of sustainability for a show. I remember Fox heavily hyping this episode as being the the one hundredth episode, and as such, I've only ever seen it knowing as much. Which makes the experience a bit odd, because it's never seemed like this episode was written knowing it would a milestone episode (because it wasn't written as such).

Which doesn't mean it's a bad episode (because it is quite good, with a surprisingly sweet story at its center), just that there's nothing about it which overtly acknowledges the show's centennial (which is more often than not the case when it comes to the milestone episodes. Only one - the 500th - seems like it was written with the milestone in mind). Certainly, there's a ton of things introduced in this episode that become a bigger deal later in the show's run, but nobody could have known that at the time, of course. If one wanted to read some anniversary meaning into the plot, one could argue that Bart getting Skinner fired is the logical climax of his antics, which so defined the early years of the series (though Bart and Skinner will both be responsible for much bigger shenanigans in future episodes without suffering the consequences of this one, and frankly, Bart's already done worse in previous episodes).

There's also a bit of an anniversary torch passing in this episode, as it is surprisingly Bart heavy considering the show is well past the point where Homer became the show's dominant character (even something like "Bart Gets an Elephant" gave some of its best lines and gags to Homer). Aside from a brief (and funny) pop in from Homer, he's mostly missing from the show's hundredth episode, a remarkable fact nowadays (and really, even then). It makes sense, then, that the writing staff selected a Bart-centric episode for the show's centenary, an acknowledgement of the character who drove the show to success (and into the pop culture zeitgeist) in its early years, helping ensure The Simpsons would reach one hundred episodes.

In addition to introducing a bunch of new things to the series and being the first of the show's five (as of this writing) centennial episodes, it also contextualizes the Bart/Skinner relationship and reaches the same comedic heights as most of this season's other episodes. 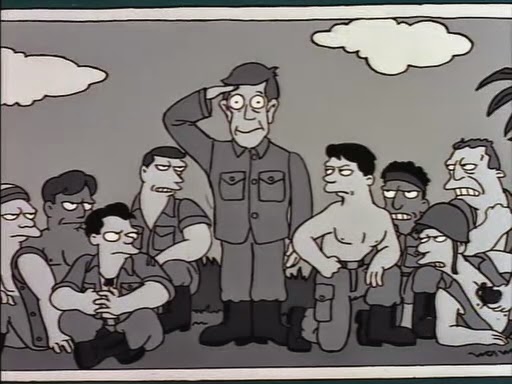