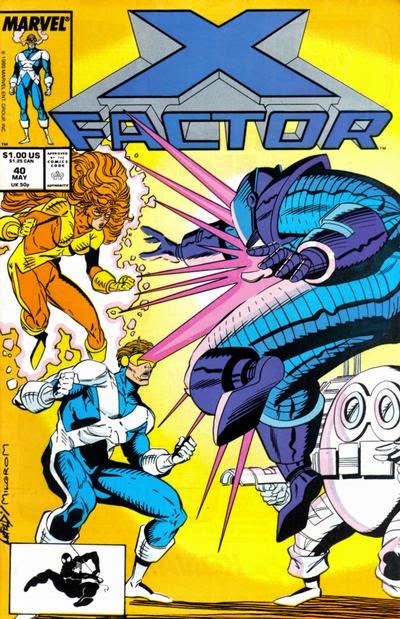 In a Nutshell
X-Factor battles Nanny and the Orphan Maker.

Plot
Watched by Nanny and the Orphan Maker, X-Factor leaves Madelyne's funeral, ending a week of funerals for the heroes. Nanny tells Orphan Maker that once X-Factor leaves their ship with the babies kidnapped during Inferno, they'll make their move to take the babies for themselves. Returning to Ship, X-Factor is greeted by the X-Terminators and Jean's parents. Shortly thereafter, Iceman leaves to return Artie, Leech and Taki to school, while the rest of X-Factor heads to Washington, D.C. to hand the kidnapped babies over to the government. As they reach the city, Nanny captures X-Factor's plane above the city. She and Orphan Maker force their way aboard and attack. During the course of their battle, Beast is hurled into Nanny's ship, disrupting its ability to fly and sending it and X-Factor's plane hurtling to the ground. 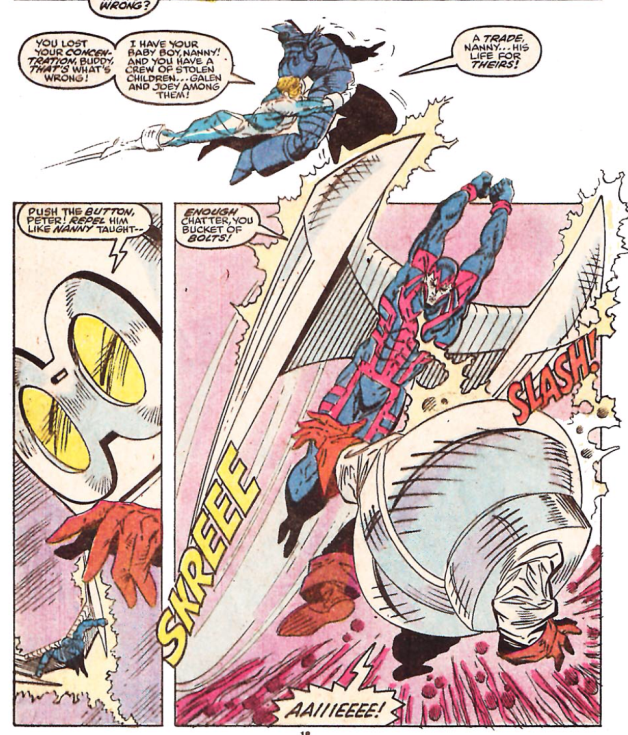 As Archangel slices open Nanny's armor, shocked to find a person inside, Marvel Girl uses her telekinesis to bring the vehicles down safely. As Orphan Maker tends to the injured Nanny, Marvel Girl locates Nanny's Lost Boys and Girls, including Marvel Girl's niece and nephew, hidden aboard her ship. However, the children have been brainwashed by Nanny, and when Marvel Girl demands she set them right, Nanny teleports away with Orphan Maker. Later, X-Factor turns over the infants, as well as Nanny's erstwhile charges, to Freedom Force, who say the government has already begun locating their parents. Returning to Ship, Marvel Girl's niece and nephew are reunited with their grandparents, which seems to jog their memory. Her parents agree to take the children in, and Jean says that a peaceful, normal life is what they need.

Firsts and Other Notables
Rob Liefeld contributes his first work to an X-book with this issue, filling in in the wake of Walt Simonson's departure. He will, of course, eventually be assigned as the regular penciller of New Mutants and end up shepharding that title's transformation into X-Force in a few years time, before leaving Marvel entirely to co-found Image Comics and star in Levi's commercials.

His work here isn't bad - or, at least, not as bad as it could be/will be. Al Milgrom remains on hand as inker and perhaps, in a rare case of Al Milgrom improving the art instead of worsening it, his presence helps reign in Liefeld's more problematic tendencies. That said, some of Liefeld's stylistic hallmarks are in full swing: Marvel Girl's hair is HUGE throughout the issue, backgrounds occasionally disappear and are replaced by colored or white space, and the panel-to-panel flow, particularly in the action sequences, becomes hard to follow, with characters' placement relative to each other and their setting often a mystery. 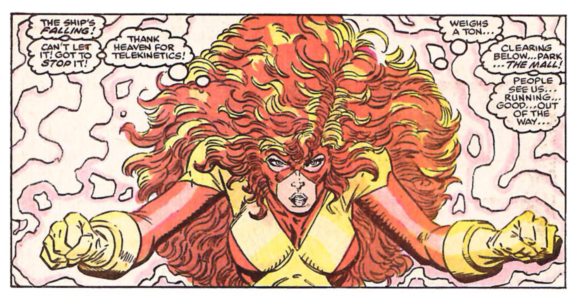 The issue opens immediately after Madelyne Pryor's funeral, and it's mentioned that X-Factor recently attended Candy Southern's funeral as well (a reminder that the events of "Inferno" only spanned a few days, even though Candy died six issues ago). Nobody but X-Factor attended Maddie's funeral, and it's said that, by design, she had no life outside of X-Factor and the X-Men. Which, while true per the "Inferno" retcons, is still kind of sad. And, of course, the X-Men don't attend, because of reasons. 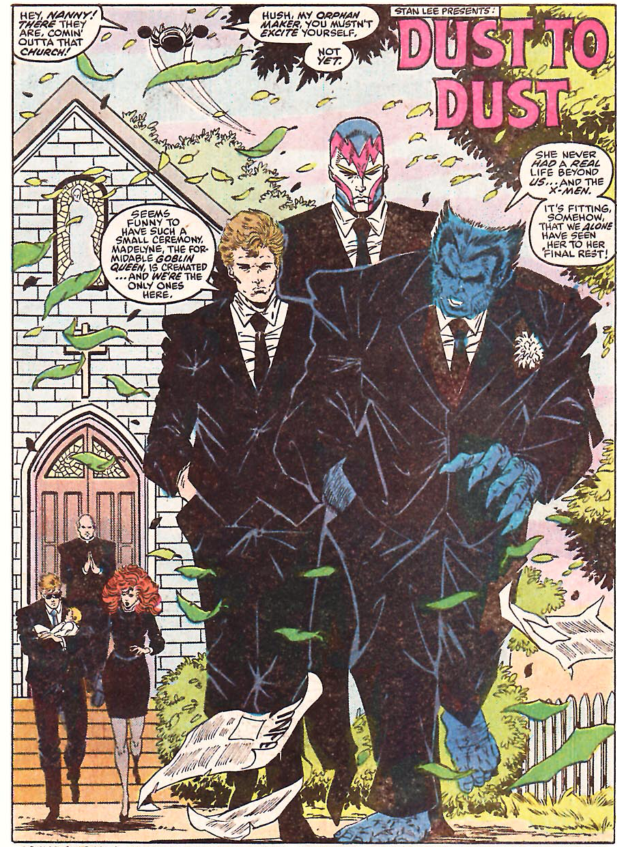 Artie, Leech and Wiz Kid are all said to be returning to school (and this is the last we'll see of them until the "Kings of Pain" story in the 1991 annuals), while the older kids are remaining on Ship, as their school doesn't want them back for fear of future "incidents" involving them. 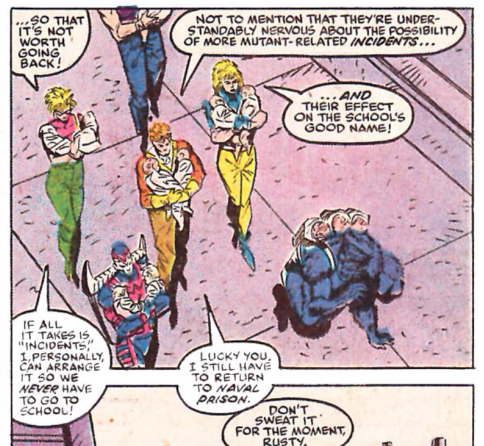 At the end of the issue, Rusty is furloughed on his and X-Factor's recognizance pending his trial, preventing him from having to go back to jail. However, this won't stop Freedom Force from coming after him again in future New Mutants issues. 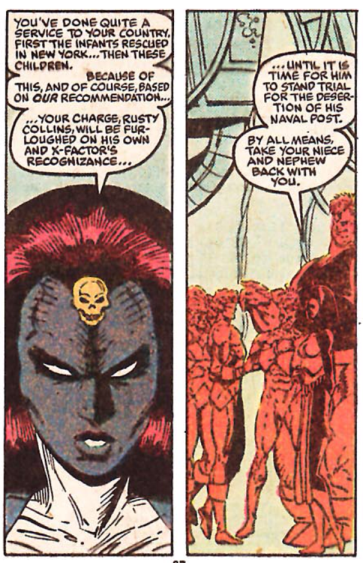 The children kidnapped by the demons throughout "Inferno" are turned over to the government by way of Freedom Force, and though it's said here that most of their parents have already been contacted, a later story in the revived New Mutants title will reveal that the mutant babies were actually turned over to the army and used in an effort to take control of Limbo.

Nanny's origin as a mutant scientist for the Right turned rogue is recounted by Orphan Maker. 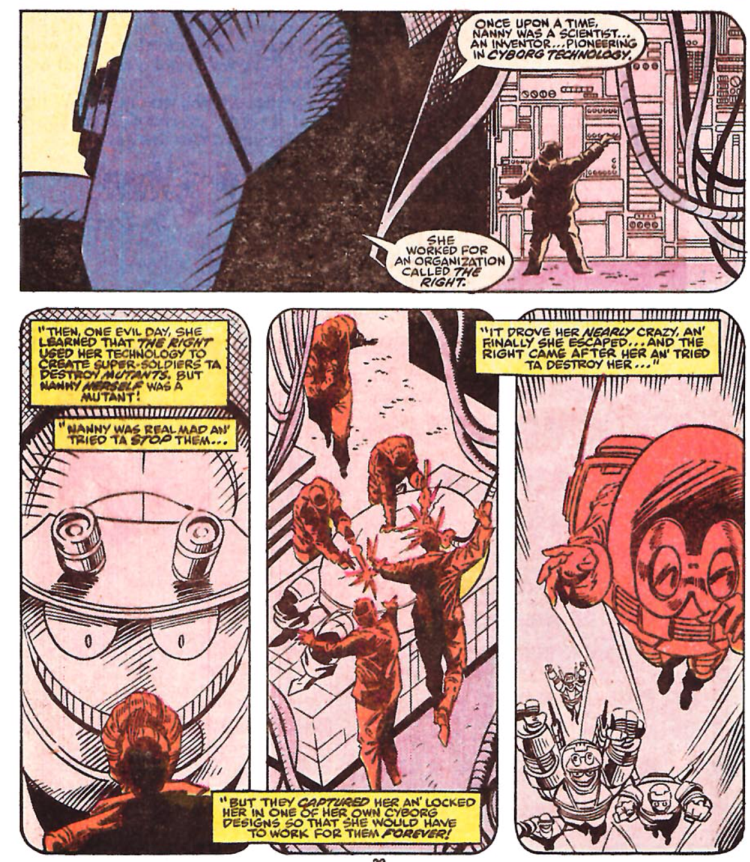 It's also established that Nanny took Orphan Maker from Mr. Sinister's orphanage, though nothing ever really comes of this. We are, unfortunately, not done with Nanny and the Orphan Maker quite yet, as both will next pop up in X-Men in a few months' time.

Marvel Girl's niece and nephew, Joey and Gailyn (or "Galen" in this issue), are rescued from Nanny this issue and turned over to their grandparents for care. Cyclops promises they'll find Jean's missing sister, the kids' mother, as well, though they never actually do. Joey and Gailyn mostly fade into obscurity from this point forward, until they're killed off along with the rest of the Grey family in the early 00s story "End of Greys". 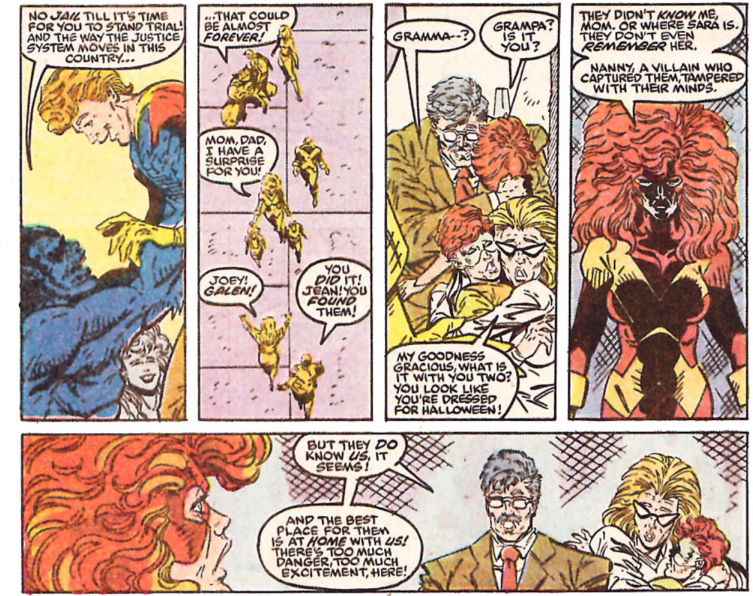 The Statement of Ownership in this issue lists the average number of copies of each issue sold during preceding 12 months to be 491,380, with the single issue nearest to filing date selling 418,490.

A Work in Progress
Angel's pink and blue costume is seen beneath his tuxedo, further suggesting that's his skin now and not a costume (though we'll eventually learn it is just a costume).

In the wake of his encounter with N'astirh, Taki says his ability to reshape matter remains, but is weaker than it was before.

It's revealed that all the children at Mr. Sinister's orphanage have been freed.

Throughout the issue, the characters seem confused as to whether or Nanny is robot. Marvel Girl, who realized in issue #35 that Nanny was a low level telepath, refers to her as both a robot and "her", and Archangel is later shocked when Nanny screams after he attacks her.

The Reference Section
Nanny quotes a nursery rhyme I had to look up. It's from Halliwell’s “Nursery Rhymes of England” called “One-ery Two-ery”.

Artistic Achievements
Credit where credit is due: the two panel sequence that shows Cyclops facing off against Orphan Maker as Nanny zooms in through a hole in the ship, is the kind of dynamic layout that made Liefeld an exciting (and popular) despite his many, many fundamental flaws (Archangel's attack on Nanny, pictured in the plot synopsis above, is another such instance). 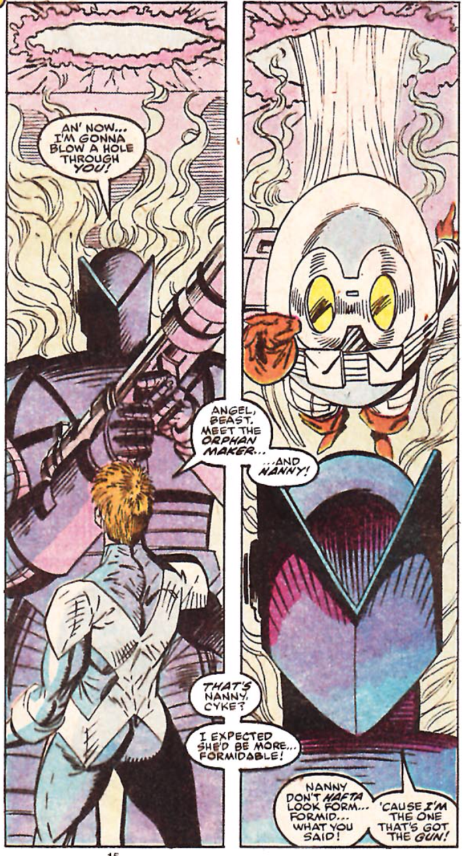 It's in the Mail
The letters column in this issue run a pair of longer letters, written circa issue #32, one expressing the belief that Scott and Jean belong together, the other a defense of Cyclops which, amongst other things, points out the whole "Madelyne didn't ask Roma to reunite her with her son" thing that's been mentioned here a few times.

Teebore's Take
Of the three series which handled the bulk of the main "Inferno" narrative, this issue stands as the one structured most like a traditional epilogue to a big, long-running storyline. We get the funeral of Maddie (or, at least, its immediate aftermath), and while the character deserved better (and continues to be slandered somewhat in death), hey, at least her death is acknowledged and we're told she was respectfully laid to rest. After that, we get the obligatory (but necessary) check-in on the book's cast  post-crossover (the kids are back, though the youngest are returning to school, Rusty's been furloughed, etc.) along with a wrap up to some of the storyline's lingering threads (the kidnapped babies are turned over to the government).

For the obligatory action scenes, we get the return of Nanny and the Orphan Maker, which adds a nice bookend to "Inferno" (as they were the villains fought in the issue just prior to the crossover's beginning, and participated on the fringes of "Inferno") and also ties up the thread of Marvel Girl's kidnapped niece and nephew, further adding to the epilogue feel of the issue. All in all, it's an effective "taking a breath" story, allowing the significant happenings of the past few months some time to sink in, for the characters and readers. Certainly, it's much better than any issue featuring Rob Liefeld on art and Nanny and the Orphan Maker as the antagonists has any right to be.