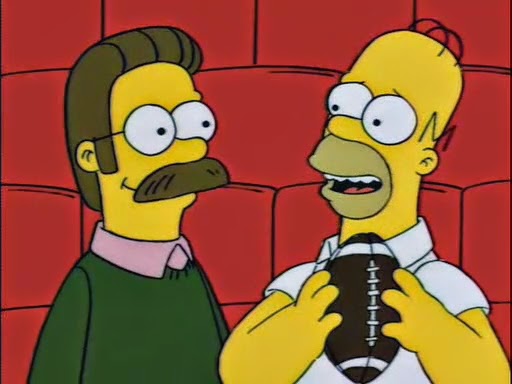 Or the One Where
Homer, uh, becomes friends with Flanders.

The Setup
After Ned wins tickets to the big Springfield vs. Shelbyville football game and invites Homer, Homer has such a great time that he begins spending more time with Ned.

Notable Notes
This is the last episode to have been pitched by Conan O'Brien before he left the series.

This episode hangs a lampshade on the similarities between Chief Wiggum's voice and Edward G. Robinson's, as Wiggum asks Flanders "where's your messiah now?" (a line popularly attributed to Robinson's character in The Ten Commandments, even though he doesn't actually say it) as he arrests him for a DUI.

This is also the episode which introduced us to "mmm...sacrilecious" as Homer eats a waffle he believes to be God and the term "hepped up on Goofballs" as a synonym for "drunk". 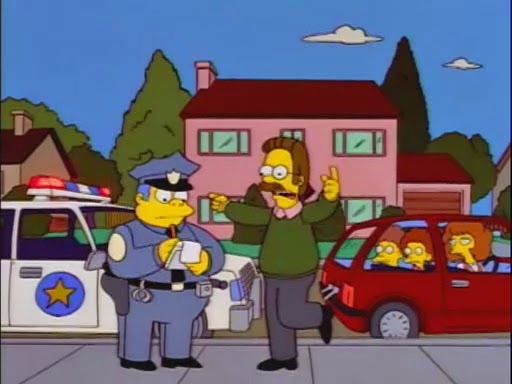 Quotable Quotes
Lisa: What's so special about this game anyway? It's just another chapter in the pointless rivalry between Springfield and Shelbyville. They built a mini-mall, so we built a bigger mini-mall. They made the world's largest pizza, so we burnt down their city hall.

Marge: Homey, I'm very proud of you, but don't you think you're spending  too much time with Ned? Your family needs you too.
Homer: Oh, of course you'd say something like that, Marge. You've hated Ned for years! In fact, you wanted to bash his head in with a pipe.
Marge: That was you!
Homer: Love, Marge. Don't hate. Love.

Lisa: Don't worry, Bart. It seems like every week something odd happens to the Simpsons. My advice is to ride it out, make the occasional smart-alec quip, and by next week we'll be back to where we started from, ready for another wacky adventure.
Bart: Ay, caramba!
Lisa: That's the spirit. 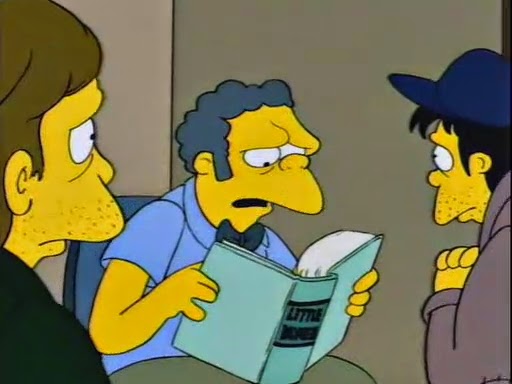 Teebore's Take
By now, we've already had a few Flanders-centric episodes, including the time Homer wished ill on Ned's Leftorium start-up and the time Homer and Ned bet on their boys' minigolf tournament. This episode follows through on one of the more obvious developments of their relationship - what if Homer actually started to like Ned? - then continues on to the next twist - what if Ned in turn started to hate Homer? - and suggests that Homer being a jerk to Flanders is perhaps the best thing he can do, as being his friend would just drive Flanders insane. The end result is another solid episode that doesn't quite rise to the level of all time classic, though it's still pretty good, and it does provide another of my most-often repeated lies ("Lies make baby Jesus cry"). It's just not the transcendent awesomeness that is, say, "Deep Space Homer" or "Homer the Vigilante", a rare episode that is "just" good in a season filled with all time greats.

This episode also continues what has become something of a season-long trend for metatextuality (even for a show that often makes fourth wall-breaking asides), as Bart notes the oddness of Homer and Flanders being friends to Lisa, which prompts a winking conversation between the two (and the episode ends with a gag about the family having to spent a night in a haunted house to earn an inheritance). While certainly in keeping with the show's aesthetic, particularly in this season, perhaps pointing out the sitcom-y-ness of this episode's plot contributes a bit to its failure to attain status as one of the series' all time greats.

Despite giving me the oft-repeated "Lies make baby Jesus cry", this episode isn't quite the five-head classic of many of the surrounding episodes. Still, being very good in a sea of great is nothing to be ashamed of. 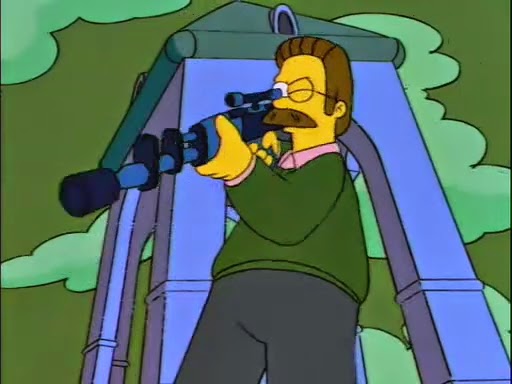