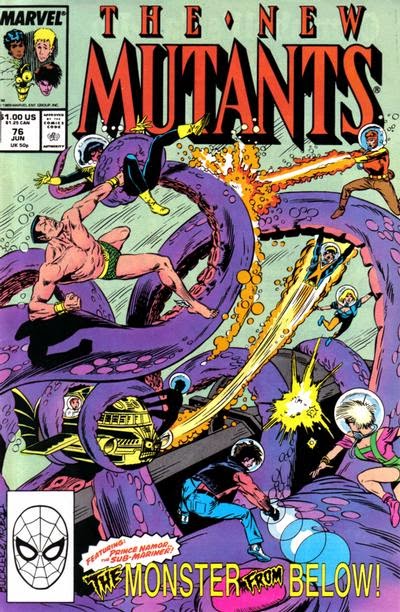 In a Nutshell
The combined New Mutants & X-Terminators battle a sea monster.

Plot
Leaving the wreckage of the mansion, the New Mutants ponder their next move. Deciding all that's left is to pack it in and return home, they stop at a mall to use a payphone to call their families. However, the crowd thinks they're demons who have kidnapped Illyana, and they quickly realize they don't want to return to their old lives. When the cops show up, they flee, and Warlock decides to take everyone back to X-Factor's ship for the time being. Meanwhile, the X-Terminators, having been instructed by Ship while X-Factor is away to do something educational, are exploring the ocean beneath Ship. They discover a large and unique-looking shell on the ocean floor, and bring it back inside. 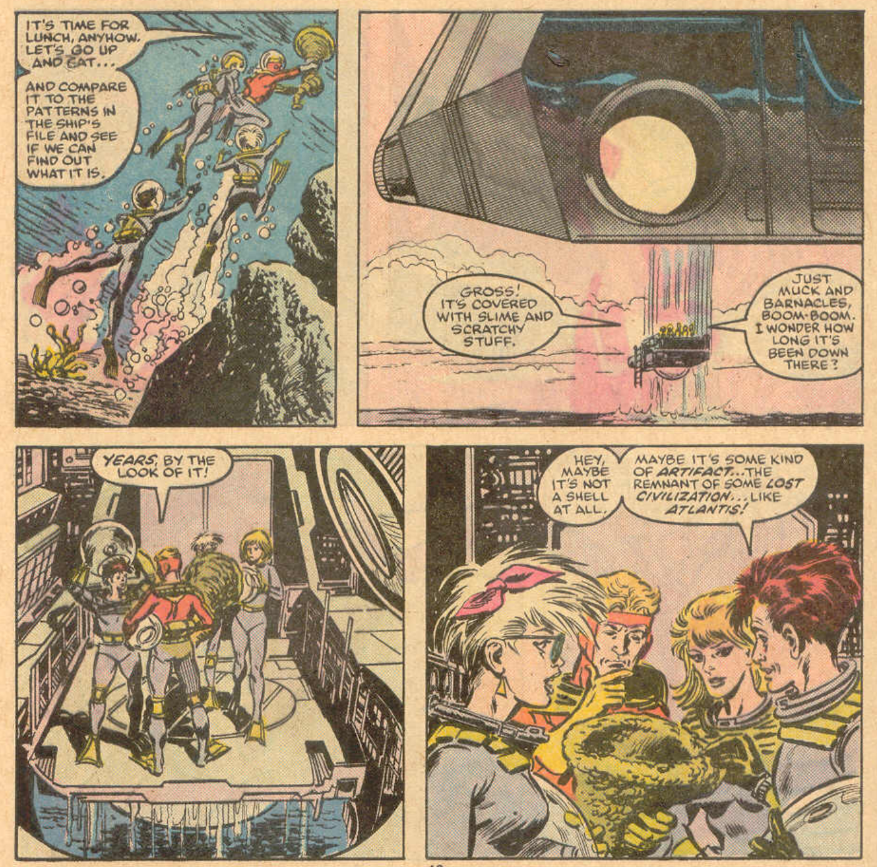 Cleaning it up, they realize it's actually a horn, and when Boom-Boom blows it, a large tentacled sea monster appears and attacks Ship. The X-Terminators get out just as Ship is dragged underwater and the New Mutants arrive, followed shortly thereafter by Namor, who admonishes them for blowing on the horn and summoning the creature. Owning up to their mistake, the combined X-Terminators and New Mutants work together with Namor to injure the creature enough so that it releases Ship and swims away. In the aftermath, Namor leaves with the horn. X-Factor then offers the New Mutants a permanent place on Ship with them, though Rahne wonders what's to become of Illyana. 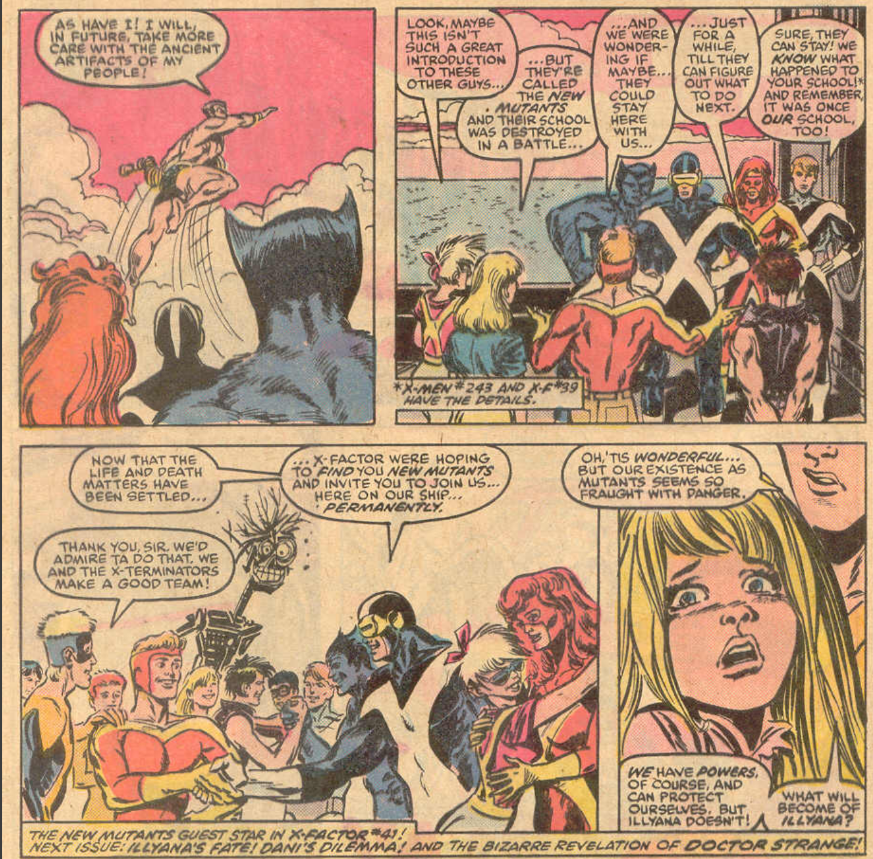 X-Factor says that, once the craziness of "Inferno" had died down, they intended to seek out the New Mutants and bring them under their care, and yes, things have been crazy for them lately. But given that X-Factor believed the New Mutants were being held under the sway of a villainous Magneto, you'd think they might have made the effort even before the Inferno craziness exploded.

Namor the Sub Mariner guest stars in this issue, teaming up with the New Mutants to battle the sea monster accidentally summoned by the X-Terminators.

The horn the X-Terminators discover is the same one used by Namor in Fantastic Four #4 (his first modern appearance), and will reappear during the "Atlantis Attacks" storyline in this year's annuals.

Anybody worried about Brightwind, Dani's winged horse, in the wake of the mansion explosion? Anyone remember that Brightwind even existed? Well, you'll be pleased to know he survived the explosion and is a-ok. Obviously, this is a lot of hand-waving just to keep Brightwind around, but I can't really complain. If he showed up without explanation or never again, I'd call shenanigans, so I appreciate the effort to devote a panel establishing he survived the explosion, even if it's the most offhanded and transparent of explanations. 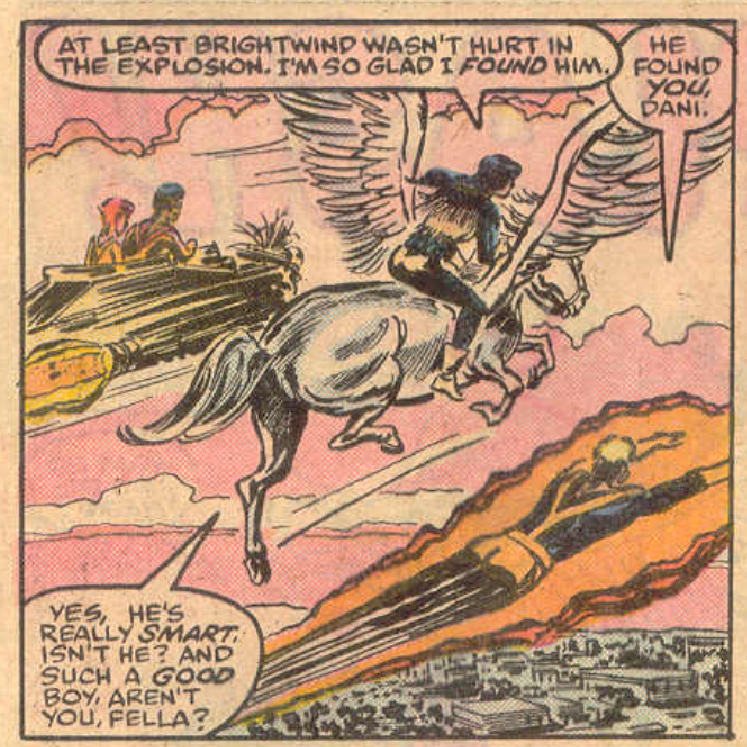 Rich Buckler fills in on pencils, Buckler, something of a journeyman artist who had a two year run on Fantastic Four in the 70s, created Deathlok and drew the acclaimed "Death of Jean DeWolff" storyline in Spectacular Spider-Man, will stick around for next issue, and later fill-in on an issue of X-Factor. His work is definitely old-school, but I like it, particularly as inked here by Tom Palmer (but then, I'm a sucker for anything inked by Tom Palmer).

A Work in Progress
The idea that the general populace is starting to think that the events of Inferno were all a hoax is suggested.

Dani uses her power to manifest a quarter so Sam can try to call his parents. The idea that Dani can create money has been established before (the bribe she created for the alien official during the Gosamyr story), but this was the first time it really hit me that she could do some pretty shifty things with it, like buy stuff with money that will eventually disappear once she calls forth something else. I mean, it's just a quarter, but she's essentially stealing from the phone company by creating it for Sam.

I Love the 80s
The payphone Sam uses costs a quarter. Also, payphones are a thing that people need readily. 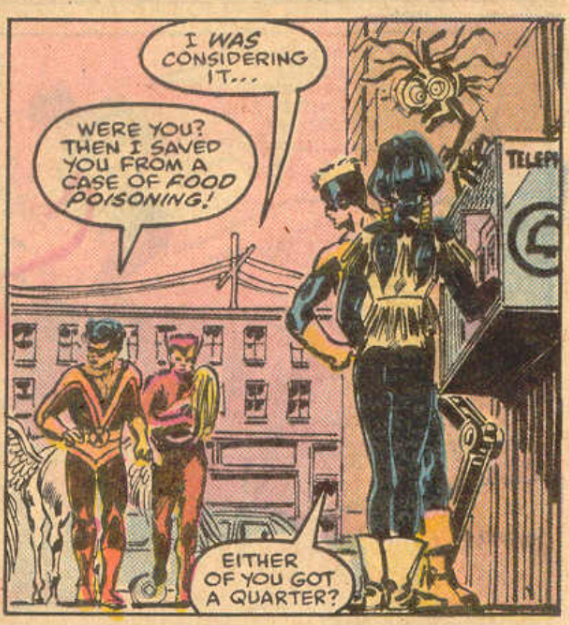 Human/Mutant Relations
Sunspot goes off on the crowd accusing the New Mutants of being kid-stealing demons, calling them bigots. 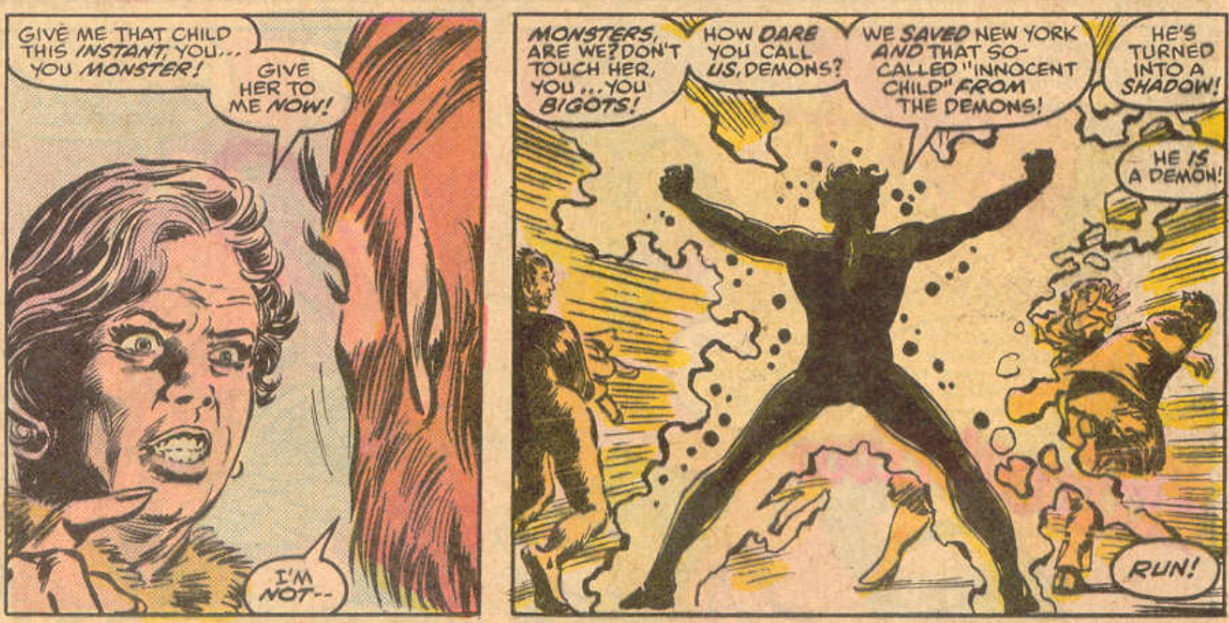 It's in the Mail
The letters page runs a pair of not-so-complimentary letters this issue, though at least one praises Simonson and hopes she'll turn the ship around, so to speak.

Teebore's Take
Not a whole lot to this one, the kind of Bronze Age done-in-one plot with connective tissue to the issues around it which you just don't see much of these days. It's ostensibly intended to formally integrate the X-Terminators with the New Mutants. The first half of the issue is functionally an introduction to the former as their own entity, for anyone who missed their limited series or doesn't read X-Factor, and in fact, for parts of this issue, you'd be forgiven for thinking you were reading another kids-centric issue of that series. The second half then brings in the New Mutants, and shows the two teams working together towards a common goal, and ends with the New Mutants being taken in by X-Factor. Granted, a lot of this introduction/integration stuff was done in "Inferno", but those pieces were always subtext to the main events of that story, whereas this story exists entirely in service to unifying the two teams. To that end, it's successful, and enjoyable in an old school kind of way, even if it's not terribly exciting or memorable otherwise.