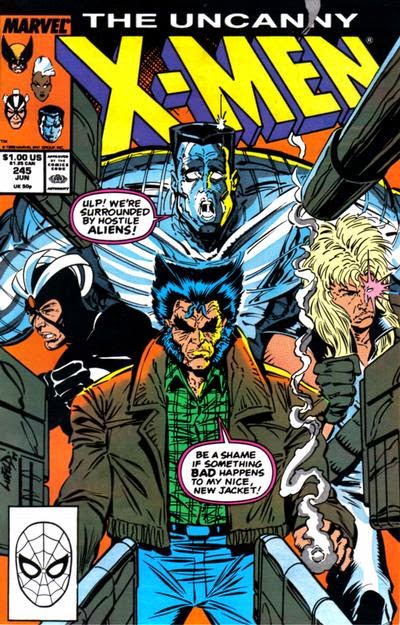 In a Nutshell
The male X-Men repel an alien invasion.

Plot
In orbit above Earth, an alien coalition prepares to launch its invasion of the planet as an archivist discovers humanity's success against other alien foes. In Australia, a morose Havok observes his teammates through the town's computer system before getting into an argument with Storm and Wolverine over their use. Suspecting what worked for the women would help the men as well, Wolverine suggests a boys night out. In space, the invasion leader is shown the Jean Bomb, a weapon in the form of a red-headed woman with the power to destroy all bonds. Just then, the archivist tries to warn the leader about Earth, but is gunned down for getting too close. In Sydney, Wolverine leads the male X-Men into a bar, where Longshot proceeds to dance with all the women while the rest get drunk. 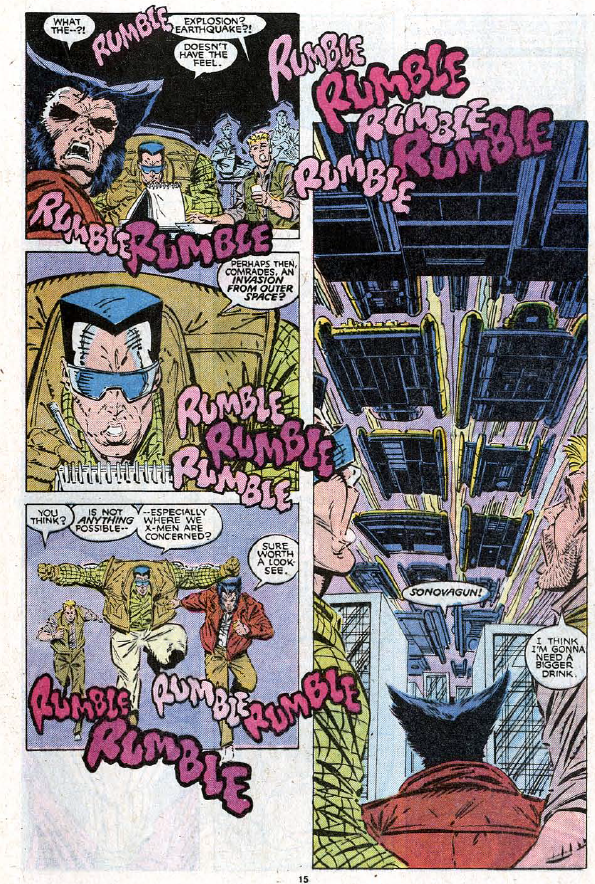 Eventually, they're drawn outside by the sound of the invasion attacking the city. Most of the city's denizens seem unperturbed by the presence of the invaders, with the mayor even offering his seat to the leader in order to finally go on vacation. At the bar, Colossus gets into a brawl with a group of shock troops, while Longshot is accosted by a team of winged female commandos whom he eventually charms. Infuriated by the failures of his forces, the leader orders the detonation of the Jean Bomb as Wolverine bluffs his way to a win in a game of poker against the strike force's commander. Outside, the leader's ship departs as it prepares to drop the bomb, but Havok blasts it, destroying the ship and the weapon, ending the invasion. The X-Men return home, all the better for their night out. Meanwhile, in Kentucky, Tessa investigates a massacre at a Shaw Industries facility, and learns that Donald Pierce has escaped.

Firsts and Other Notables
The plot of this issue loosely parodies DC Comics '88/'89 crossover event series "Invasion", in which a coalition of alien races from around the DC Universe, led by the Dominators (who resemble the leader aliens in this issue), attack Earth, using Australia as their beachhead/initial invasion point. Their stated goal is to eliminate the threat posed by Earth's metahuman (ie superpowered) population, but the Dominators are secretly hoping to harness the metahumans and create their own breed of superpowered beings. In the course of the event, a "gene bomb" is detonated which targets the metahuman gene and ultimate creates several new superheroes or expands the powers of existing ones. The series, comprised of three oversized issues (the first two of which were drawn by Todd MacFarlane) and a ton of tie-ins from regular DC series, introduced the idea of the metagene as an explanation for super-powers in the DC universe (basically, creating an analogue to Marvel's mutants) and paved the way for, amongst other things, Grant Morrison's seminal Doom Patrol run.

The Gene Bomb is most overtly parodied in this issue as the Jean Bomb (which has the power to destroy relationships *rimshot*), and its depiction (as essentially a naked Jean Grey) created something of a stir back in the day, when anything, including random/accidental nudity, was used to inflate the prices of back issues during the heyday of the speculator boom. Personally, while Tween Teebore didn't mind what was seemingly a naked Jean Grey in this issue, I remember thinking even back then it was either a coloring error or a flesh-colored bodysuit, rather than "actual" nudity. 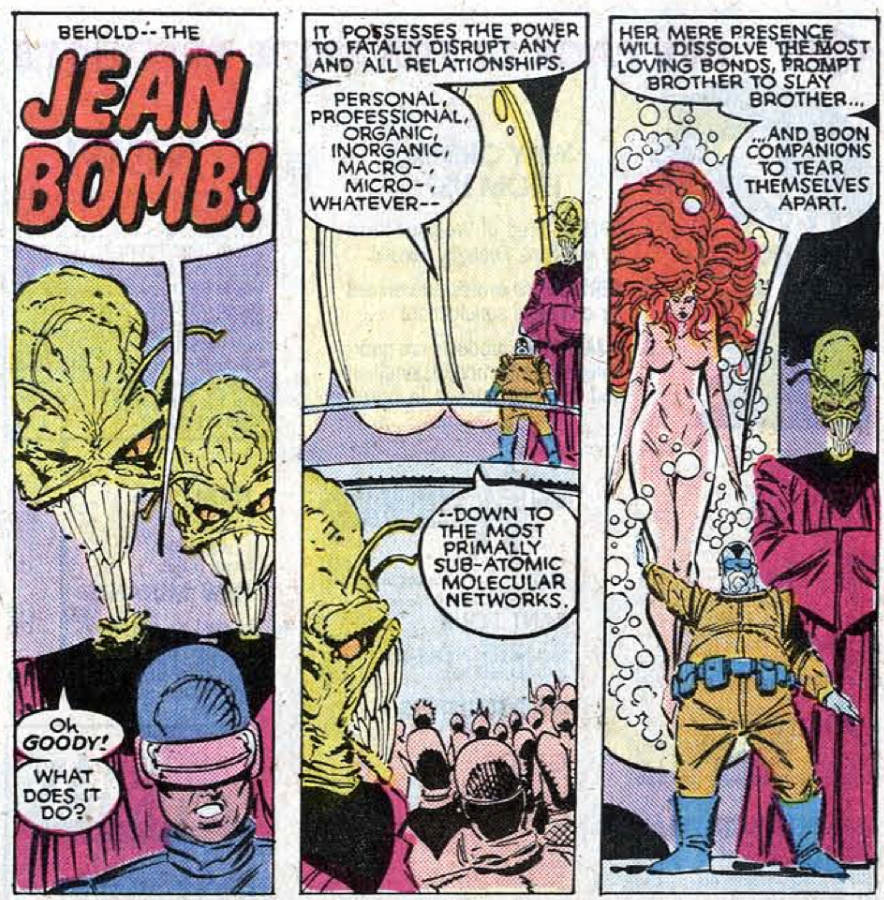 The final page of this issue shows Tessa and a group of Hellfire Club soldiers learning that Donald Pierce, last seen menacing the proto-New Mutants in Marvel Graphic Novel #4, has escaped from a Shaw Industries holding facility (in Cumberland, Kentucky, a nice detail given that's where the climax to MGN #4 took place). Shaw's recent ouster from the Inner Circle (as seen in New Mutants #75) is referenced, though it's unclear where Tessa's loyalties lie (her dialogue suggests she remains with Shaw and doesn't care if Pierce targets the rest of the Inner Circle, yet she's leading a group of Hellfire Club soldiers, suggesting she's still connected to the club). 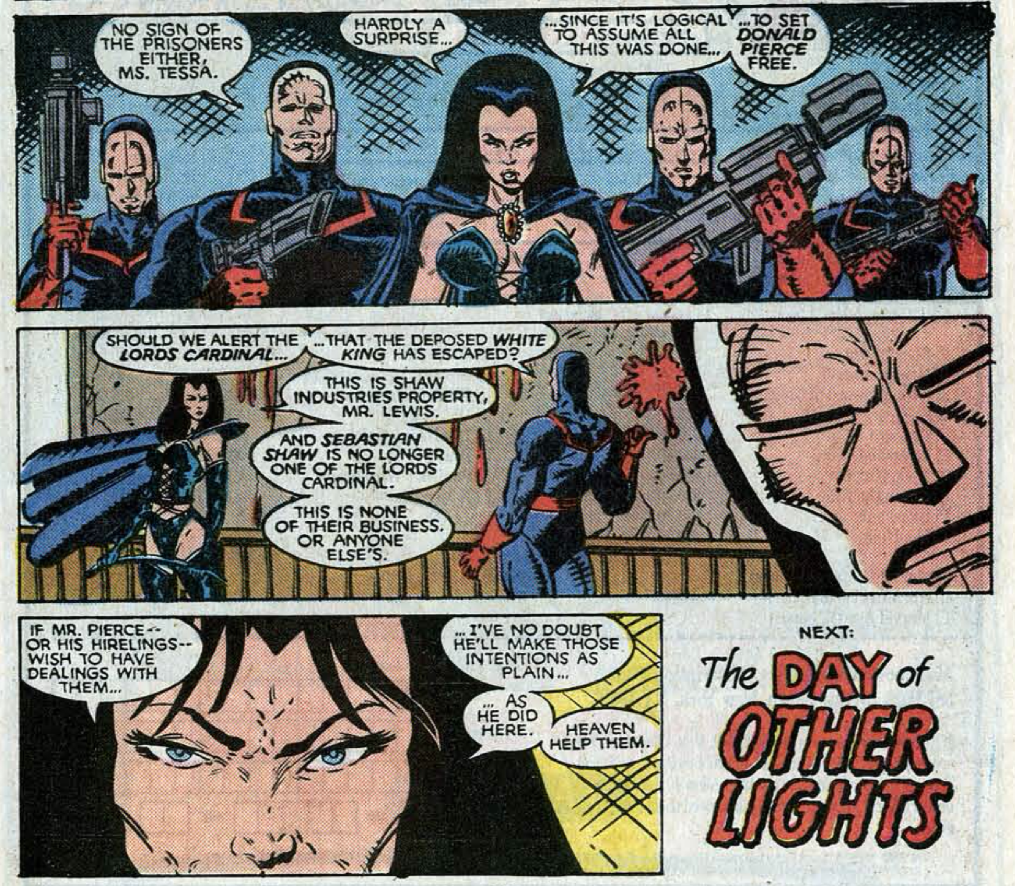 Dazzler notes that her natural brightness has recently started to upshift the spectrum from yellow to white, and worries what that might mean for her, something that I don't believe ever gets paid off.

One month after his Marvel Comics and X-Men franchise debut, Rob Liefeld drops in as guest penciler for this issue (his name is misspelled in the credits), making him the third future Image Comics co-founder to work on the series (after Whilce Portacio (who inked issue #201) and Marc Silvestri). Regular series inker Dan Green remains on hand, and seems to curb some of Liefeld's more Liefeldian tendencies (though the art is still plenty Liefeldian).

The Chronology Corner
Wolverine's appearance in this issue occurs after issue #16 of his regular series.

A Work in Progress
Earth's unique ability to repel Galactus is noted once again, along with a whole host of details that make a lowly archiver question the sanity of attacking the planet.

Alex is angry and stubblely in the wake of Maddie's death, and Storm points out he's lost two women he cars for since rejoining the team.

He also says his experience with cybernetics makes him the natural choice to takeover the running of the old Reavers' computers; what experience is that, exactly?

Wolverine's frequent absences are noted by Storm, a reference to his ongoing series. 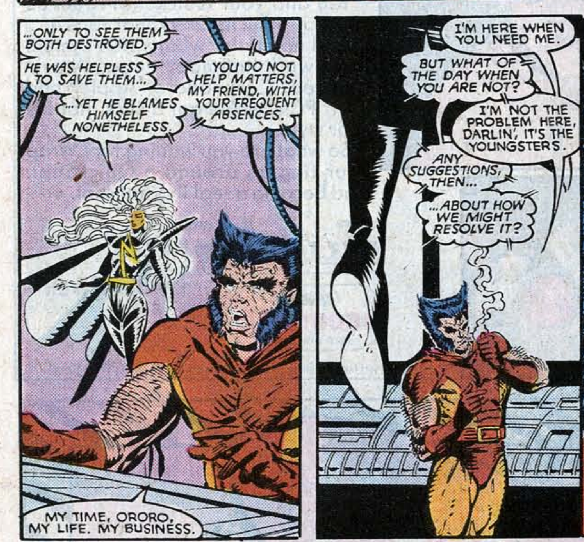 Colossus is unable to transform back to flesh, forcing Dazzler to use makeup to make his steel skin appear like regular skin. 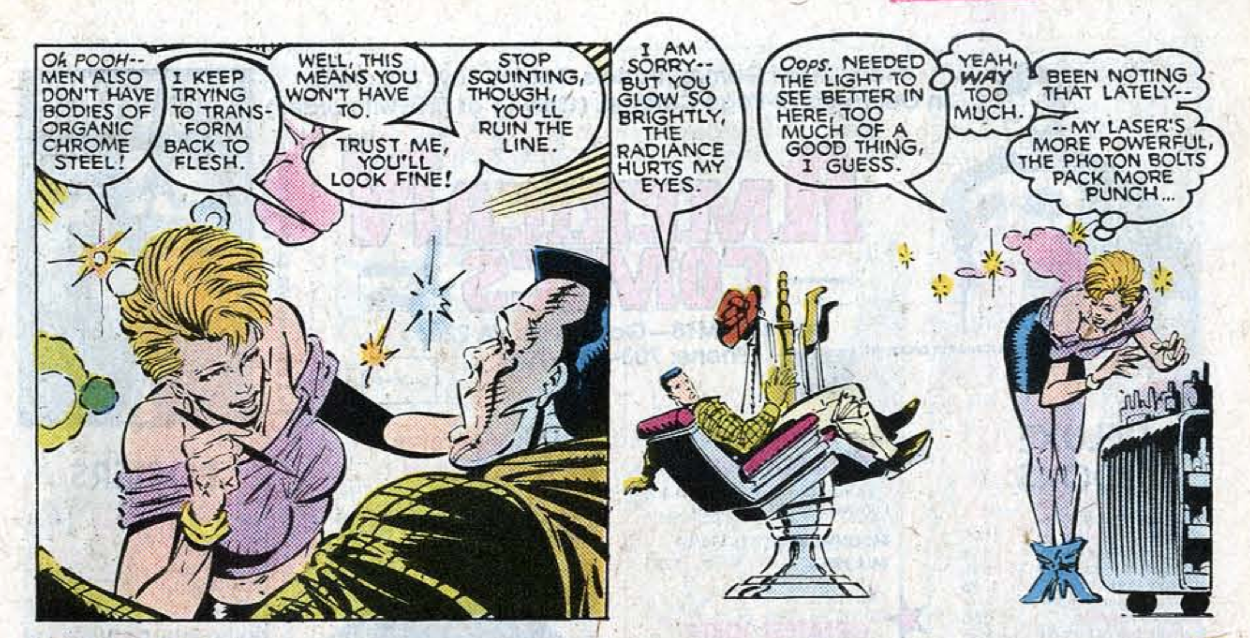 Rogue is back in control of her own body this issue, without comment.

Colossus humorously points out that the last time Wolverine took him to a bar, he ended up fighting Juggernaut, a reference to issue #183.

Alex mentions an island named Madripoor he's about, where anything goes, which is, I think, the first reference to the setting of Wolverine's solo series in Uncanny X-Men. 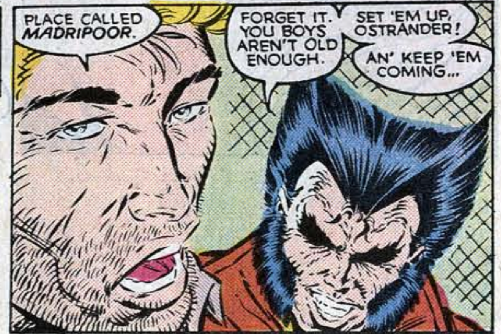 I Love the 80s
As the alien invasion begins, a local suggest another shrimp needs to be thrown on the barbie, then suggests that Hogan's ads are working, a reference, I assume, to Paul Hogan of Crocodile Dundee fame. 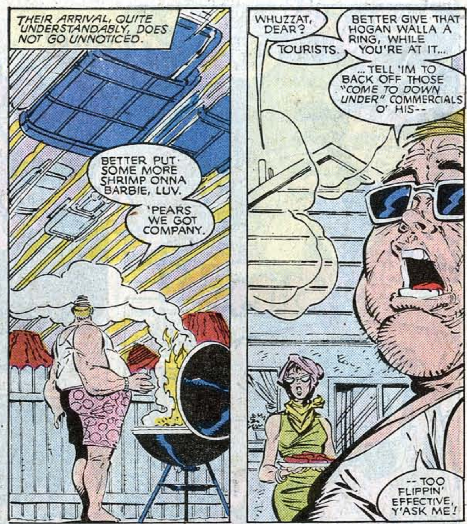 The Reference Section
In addition to the "Invasion" parodies, there's a ton of references sprinkled throughout this issue. Thanagarians (ie Hawkman), Alf, E.T., the xenomorph from the Alien films, Yoda and Jabba the Hutt are all part of the alien coalition, along with many more.

Most of the action takes place inside a bar named Muden's, which is the bar and chief location in the GrimJack series (previously referenced in New Mutants #50), and the bartender is named Ostrander, a reference to John Ostrander, who created Grim Jack.

Later, the Daily Planet TV station, complete with Jimmy Olsen, Perry White and Clark Kent analogs, is shown, but the invasion story is bypassed in favor of covering the inauguration of Bush the Elder and Dan Quayle.

We get another "shzam" sound effect.

Teebore's Take
Though not entirely disconnected from the larger narrative (what with the last page epilogue, the tease of Dazzler's developing power and the general post-Inferno malaise of the team), this issue is much more of an overt comedy issue than even the last issue, continuing the gender split to showcase the men fighting off an alien invasion inspired by DC's "Invasion!" in the most haphazard ways possible. For the most part, this works, with Australia's shrugging reaction to the invasion being the comedic highlight and the lighter, more winking, tone a nice break from the grimness that permeated "Inferno". It's also nice to see Claremont have a little fun at the series' expense, as both Longshot's ladies man aura and Wolverine's tough guy persona get lampooned a bit (even while those elements play into the plot). Even with the snippets of story that connect to the larger narrative, this is hardly essential reading, but pairs nicely with the previous issue as a bit of a palate cleanser between "Inferno" and the start of Claremont's next big plot arc.

Next Issue
Tomorrow, the New Mutants go for a swim in New Mutants #76, and Friday, X-Factor meets a new mutant in X-Factor #41. Next week, Atlantis attacks in X-Men Annual #13.
Newer Post Older Post Home
Posted by Austin Gorton at 12:00 PM