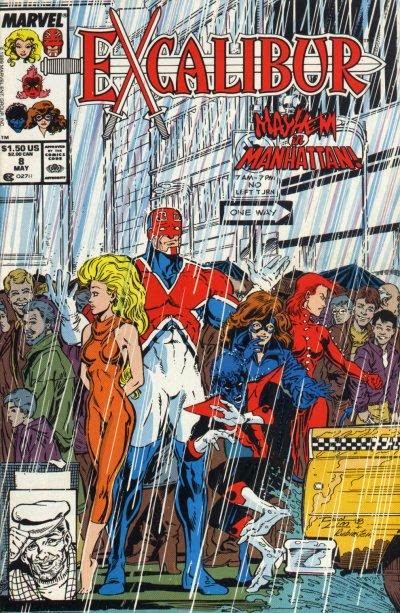 In a Nutshell
Brian searches for Meggan while the rest of the team follows up on some loose ends.

Plot
At the plaza hotel, Brian Braddock wakes up to discover Meggan and the rest of his teammates missing. While everyone else left a note, Meggan did not. Worried, Brian flies out into the city to search for her. Meggan, meanwhile, is at Coney Island, upset about her actions during Inferno. She runs into a group of women who befriend her and take her shopping. At the remains of Xavier's mansion, the New Mutants are picking through the rubble of the school when they're interrupted by Shadowcat. After she learns what happened to Illyana, Mirage offers Shadowcat a place with X-Factor, but she insists her place is with her team. In the city, Brian's powers begin to fail him, and he's forced to take a cab to continue his search, while Meggan dances with a handsome gentlemen at a street fair. 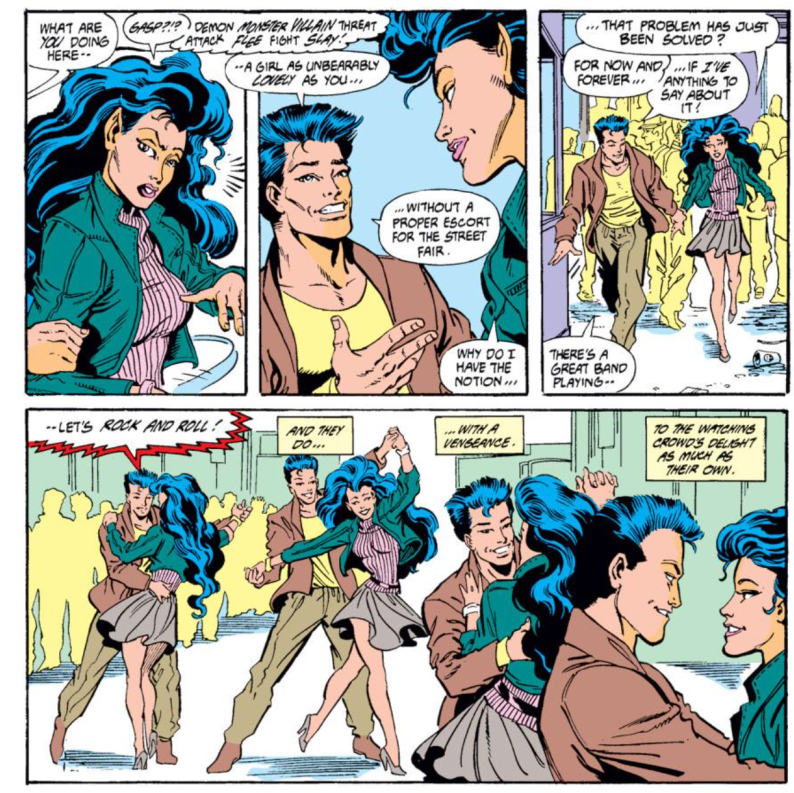 In California, Nightcrawler retrieves the X-Men's abandoned Blackbird jet from Lockheed's Skunk Works facility. Back in New York, Meggan is forced to use her powers when her dance partner tries to take things too far, while Rachel visits her baby brother aboard Ship. On her own again, Meggan ends up playing in a street basketball game when Brian finds her. Though Brian is concerned about his loss of powers and fears it may be affecting her as well, Meggan feels newly invigorated and confidant as a result of her journey that day, and pays Brian's massive cab fare for him, taking the opportunity to, for once, save him.

Firsts and Other Notables
Kitty swings by the X-Mansion this issue (thus learning it's been destroyed) and runs into the New Mutants for the first time since "Mutant Massacre" and learns what happened to Illyana during "Inferno". She proceeds to throw some shade at them for the death of Doug Ramsey and Illyana's condition, but ultimately realizes she's just angry and sad about the loss of her friends. 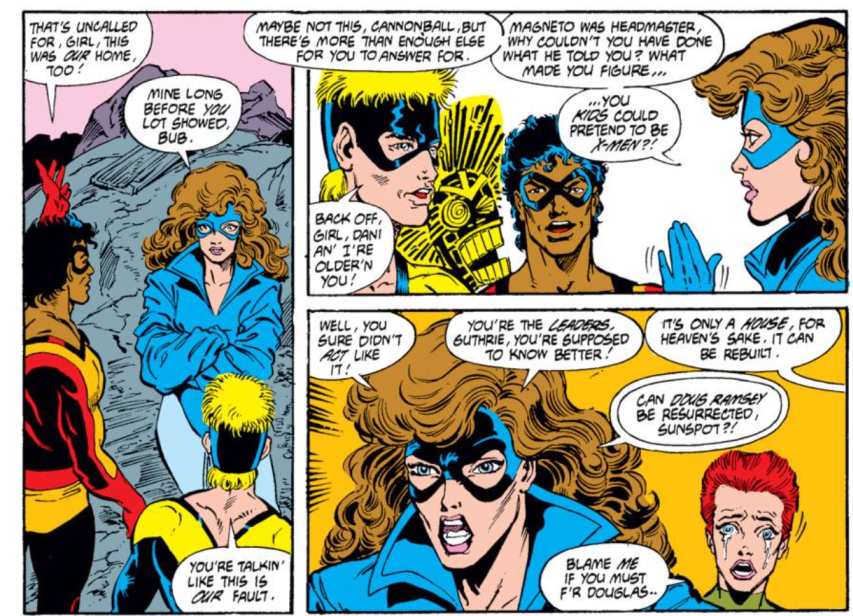 She also notes that she checked out the underground parts of the mansion and they're fine, with the self-repair systems working on the damaged areas, setting the stage for the Cable-led New Mutants eventual assumption of those facilities as their headquarters. 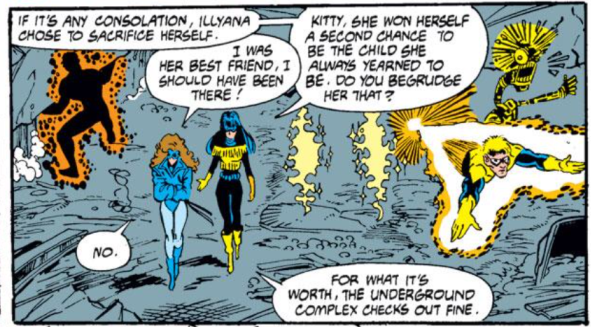 It's unclear at this point if the New Mutants are aware that the X-Men are still alive (presumably they'll learn it from X-Factor at some point, but at this point, they haven't really interacted much yet), but they're certainly aware that Colossus is alive, since they fought beside him in New Mutants #73, but as far as we see, they don't share this info with Kitty (because, of course, that would lead to Kitty learning about the rest of the X-Men and Excalibur's whole point in being coming unraveled).

Last seen being flown by the X-Men to Dallas prior to "Fall of the Mutants" in Incredible Hulk #340, the Blackbird jet has been moved to the Skunk Works facility in Californa, from which Nightcrawler retrieves it this issue to be used by Excalibur moving forward. Rachel spends some time with her baby brother this issue, though of course she doesn't actually board Ship and say hi to Cyclops or introduce herself to her "mom" (whom she should be ecstatic to learn his alive, considering how much she freaked out when she learned she was dead in this timeline), though she can't be faulted for thinking that being confronted with her grown daughter from an alternate timeline might be a bit much for Jean in the wake of everything that happened in "Inferno". They'll eventually meet face-to-face in the "Days of Future Present" story that runs through the 1990 annuals. Captain Britain's powers act wonky throughout this issue, turning on and off at random times. I believe this is setting up the notion that his powers weaken the further/longer he's away from Great Britain. 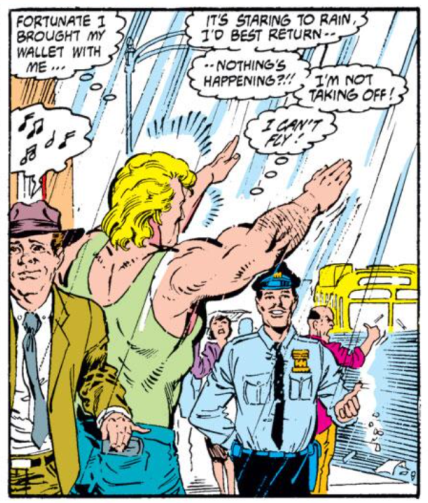 Ron Lim, who was concurrently providing the pencils to the "Retribution Affair", fills in on this issue.

The Chronology Corner
The New Mutants appear in this issue between issues #75 and #76 of their series. Presumably, Kitty arrives just after the Inner Circle departed, with the New Mutants still picking through the wreckage before returning to Ship.

A Work in Progress
Brian notes that Meggan is barely literate, something I believe was established in his solo series.

He remains costume-less following last issue, wearing a set of "gym togs" provided by the hotel throughout this issue.

It's noted that Moira is the executrix of Professor Xavier's estate. 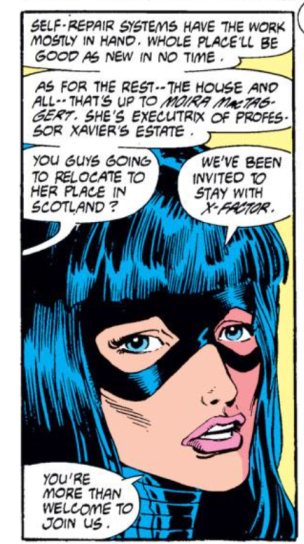 Nightcrawler says he can basically only do one teleport a day (though it's unclear if we're supposed to assume he teleported from New York to California, something which he couldn't have done even before his recent injuries).

Jean Grey continues to hear baby Christopher's thoughts in her head, and has started to think of him as her son. 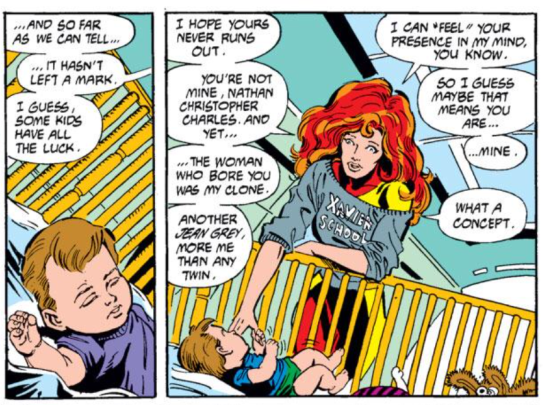 I Love the 80s
Coney Island is depicted as being rundown and past its prime, though I believe nowadays its back to being, at least, a popular tourist destination.

Claremontisms
The Skunk Works, the facility from which Nightcrawler lifts the Blackbird, is a real place, and the captions' description of it and its history is all fairly accurate, not surprising given Claremont's well-established love of planes and aviation.

The Reference Section
Lois and Clark are amongst the people who witness Brian flying away from the hotel. Teebore's Take
This, then, is the post-"Inferno" Classic Claremont Quiet issue the X-Men never got, as the members of Excalibur, still in New York following the events of the crossover, engage in a variety of activities not immediately pertaining to traditional superhero antics. Captain Britain and Meggan, being the least connected to the events of the crossover, get what stands as the plot of the episode, a character journey for Meggan that speaks to her experiences as the Goblin Princess and the recent strains on her relationship with Brian.

The other three ex X-Men, then, are left to perform little bits of fan service (albeit mostly necessary ones): Kitty learns about Illyana (but not, of course, that Colossus and the X-Men are still alive), an important moment for her character that I'm glad wasn't left to the imagination, Rachel bonds with her baby brother, a nice payoff to what was the initial impetus for Excalibur being drawn into the crossover, and, in a remarkable bit of continuity, Kurt retrieves the X-Men's unused Blackbird jet for Excalibur's use. While the absences of Alan Davis and Paul Neary are certainly felt, this is nonetheless an enjoyable issue, like X-Factor #40, the kind of "catch-your-breath and do some character business" issue that more series could have used post-"Inferno".