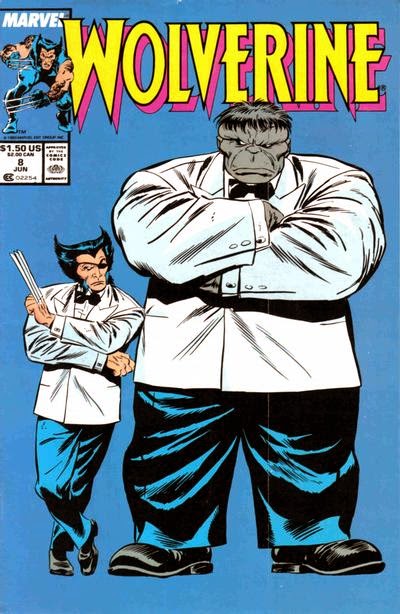 Plot
Mr. Fixit awakens in his hotel room to discover that Wolverine has replaced all his clothes with tattered purple pants. Later that evening, Wolverine is at the Princess Bar when Fixit busts in, looking for Patch to ask him about General Coy. Wolverine agrees to help Fixit locate the general, and takes him to a brothel run by Coy which is actually a clearing house for the slave trade. Once there, Wolverine manipulates Fixit into taking out the criminals on guard and freeing the enslaved women. The next evening, Fixit awakens to angrily discover the female companionship arranged by Patch was enjoyed by Bruce Banner while Fixit slept, then sets out again to find Coy. 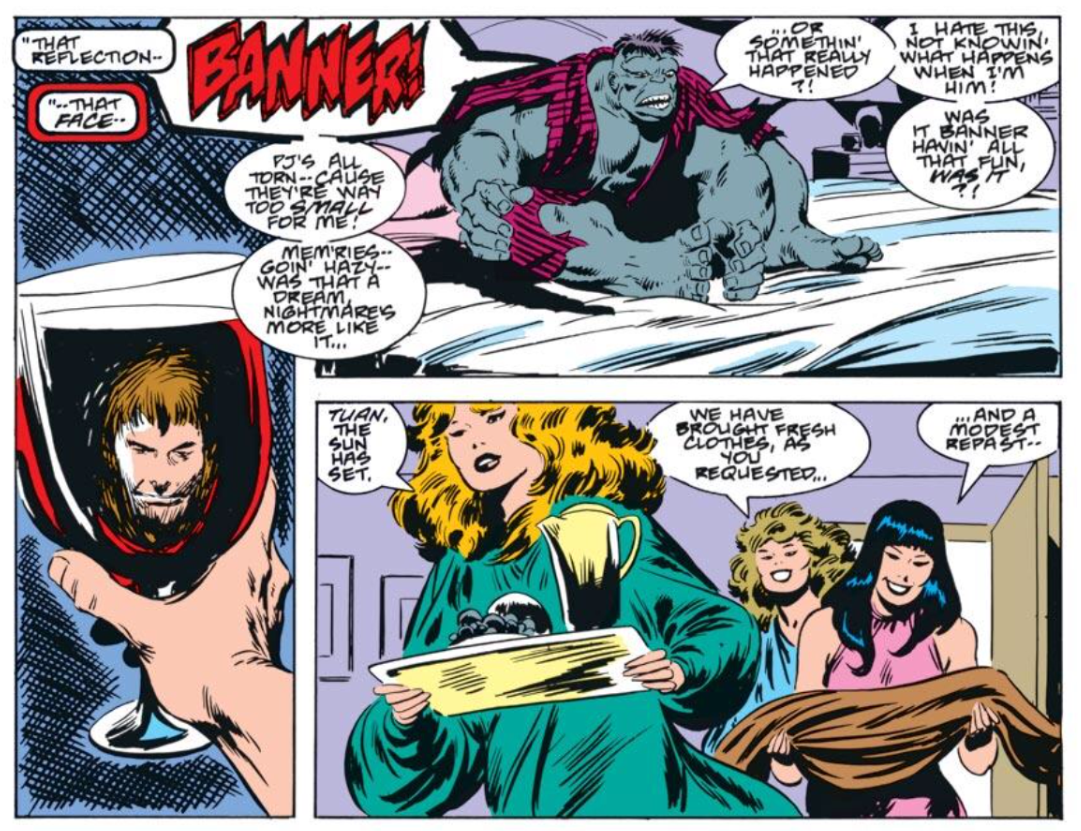 Once again, Patch maneuvers Fixit to take out one of Coy's operations, this time a cocaine processing plant, which attracts the attention of General Coy himself. Patch introduces Fixit to Coy, but when Fixit learns of Coy's role as Madripoor's co-crimelord, he walks away, saying both he and his boss were lied to, as he doesn't do mob jobs. The next day, Fixit, now suspecting Patch's true identity, says goodbye to Patch as he boards an airplane, not realizing that Wolverine has tricked him into boarding an eastbound flight that takes him directly towards the rising sun and thus a transformation back to Bruce Banner.

Firsts and Other Notables
The Hulk guest stars in this one again. And that's about it, in terms of notable things.

A Work in Progress
It's suggested that Lindsay McCabe will be staying on as the new headline act at the Princess Bar, ensuring she and Jessica will be around as part of this series' supporting cast.

Wolverine's barely even trying to hide his identity in. I mean, he isn't even wearing the fedora that obscure his trademark hair chops. How can the (not mindless at this point) Hulk not recognize him? That's just Wolverine with one eye in shadows. 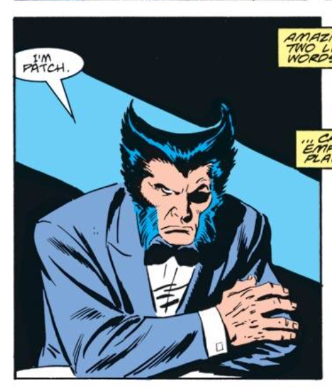 It's suggested Hulk does figure out Patch is Wolverine later in the issue, but only after Wolverine uses his claws out of Hulk's sight and Hulk recognizes the "snikt" sound effect. 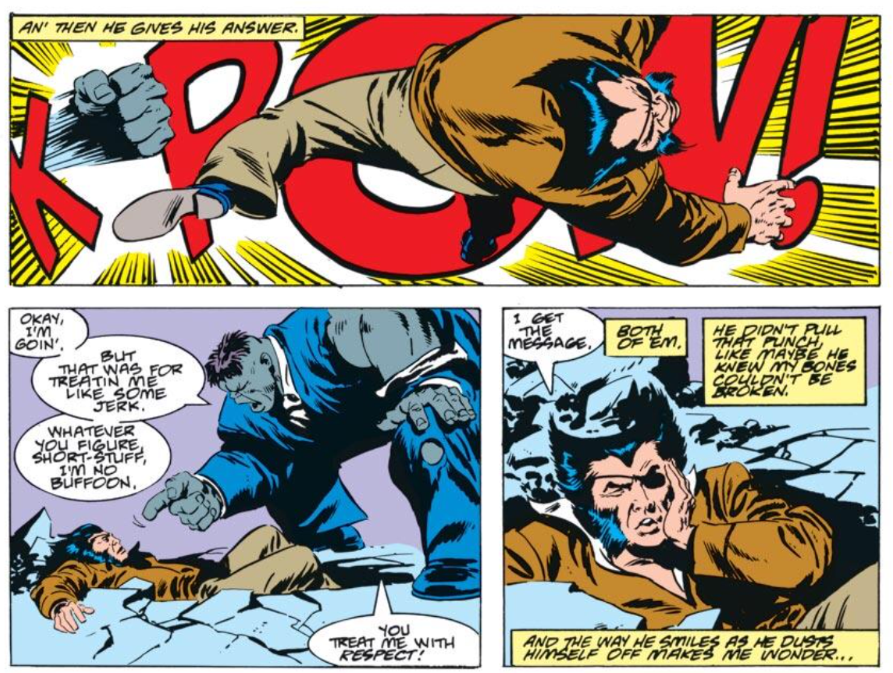 I Love the 80s
At the end of the issue, Wolverine sees the Hulk off by walking him to the departure gate of his flight home, because that was still a thing you could do in 1989. 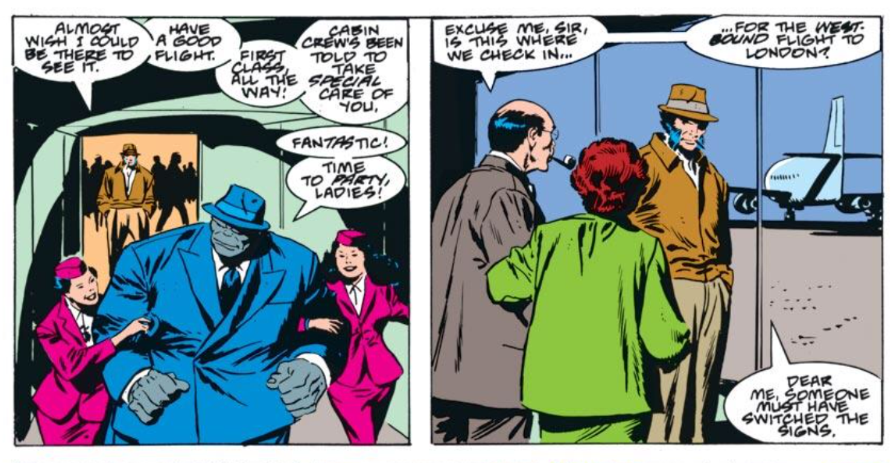 The Reference Section
Wolverine's narration goes right ahead and hangs a lampshade on it, directly comparing the Princes Bar in Madripoor to Rick's Bar in Casablanca, from the movie, Casablanca.

Wolverine quotes an old army buddy, saying he loves it when a plan comes together, a reference to A-Team leader Hannibal Smith.

Teebore's Take
With that, the gang war storyline comes to a close. It's tempting to say it ran too long, but the odd turn it took last issue, seemingly wrapping up the conflict at the center of the story and bringing in the Hulk, shifted things enough that the entire narrative doesn't feel too drawn out. Besides, this issue is actually pretty fun, as it's essentially just Wolverine messing with the Hulk for 22 pages. Tricking him into further crippling Coy's operation is one thing; replacing all his luggage with torn purple pants is just being a dick (and hilarious). In the end, this whole story isn't the most original or complex of stories (I doubt I'll ever be compelled to read it again), but it does its job: it establishes a setting, status quo and supporting cast for a relatively new series. The biggest problem with it is that it wasn't the first story of the series.