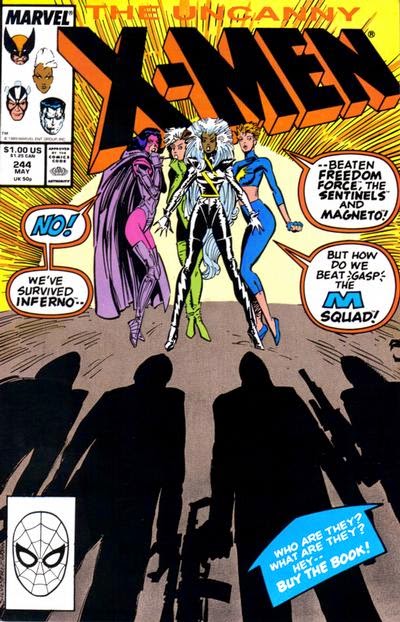 In a Nutshell
The ladies have a night out as Jubilee makes her first appearance.

Plot
At the Hollywood Mall, a young mutant named Jubilee uses her power to create fireworks and entertain a small crowd, much to the consternation of some watching mall cops, who try to arrest her. She manages to escape, so the cops decide to call in the mutant hunting M-Squad. In Australia, Rogue freaks out upon learning that Carol Danvers, while in control of Rogue's body, redecorated her room, and when Storm suggests her struggles reconciling the two personalities in her mind are a worthy punishment for what she did to Carol, Rogue grows so angry that Carol is forced to take control once again. Dazzler, thinking the ladies could use some time away from their responsibilities, suggests a trip to the mall to blow off some steam.

Back at the Hollywood Mall, M-Squad arrives just as the X-Men do. Seeing the women materialize out of thin air, a fascinated Jubilee follows them as they get their hair and makeup done and purchase new clothes. Meanwhile, M-Squad unknowingly tracks the X-Men to a nightclub and spot Jubilee trying to get in. They try to capture her using equipment still affected by Inferno, and the commotion draws the attention of the X-Men, who rescue Jubilee and protect innocent bystanders as they disable M-Squad's out-of-control machinery. Leaving M-Squad to be questioned by the cops and unable to locate Jubilee, the women teleport home, but Jubilee spots them leaving. Worried that M-Squad will come back for her, Jubilee decides to follow the X-Men home and steps into the lingering portal.

Firsts and Other Notables
This is the first appearance of Jubilee, a teenage Chinese-American mutant who possesses the mutant ability to generate fireworks (she refers to them here as the very Claremontian "articulate, quasi-animate, transitory plasmoids", and later stories will suggest she has broader energy creation and manipulation powers that, in their nascent form, manifested as fireworks). She says she is called Jubilee because every day is a party with her, though we'll eventually learn her real name is Jubilation Lee, making "Jubilee" less a superhero moniker and more an unfortunate nickname. 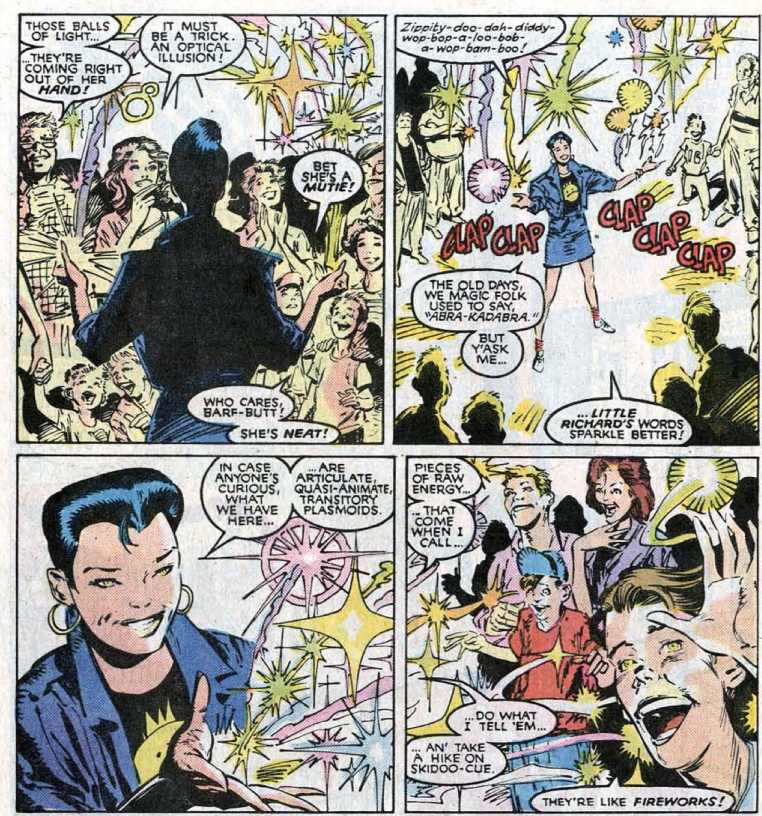 In due time, she'll end up joining the X-Men after becoming Wolverine's de facto sidekick, filling the "Wolverine mentors a spunky young girl" role previously filled by Kitty Pryde. Thanks to her use in the 90s animated series as the point-of-entry character, Jubilee is arguably more well known amongst the general population than more significant/longer serving X-Men, and by the early 90s, she be a fairly integral part of the team. She will eventually leave to found Generation X, and when that book is cancelled, she fades a bit into obscurity for a time. The 00s were not kind to her, as she lost her powers on M-Day and then became a vampire (I think she technically still is), and most recently became a single mom and a fixture of Brian Wood's all-female X-Men roster.

M-Squad, the group of bumbling Ghostbuster-esque mutant hunters with names taken from Wild Cards contributors, last seen in issue #240, return this issue, having escaped Inferno and fled to the West Coast to continue their mutant hunter practice in the wake of X-Factor having publicly  renounced their roles as such. One of their devices, still feeling the lingering effects of "Inferno", causes the X-Men more trouble this issue than the scientists themselves. They'll pop up briefly in a back-up story in the next X-Factor annual, and that'll be the last we hear of them. 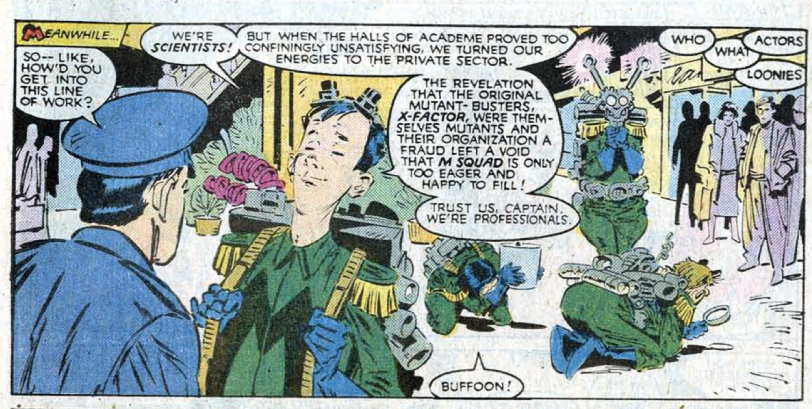 Storm notes that Psylocke was unable to locate Jubilee via psi-can; if memory serves, there's some hint in her earlier appearances that Jubilee is resistant to telepathy (a la Rogue), though I don't think anything ever comes of it, and the notion is quietly dropped. 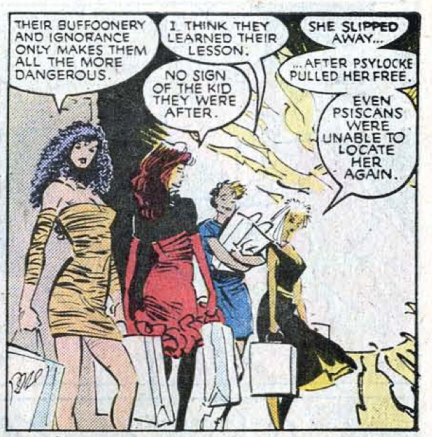 This issue and the next are a pair of relatively lighthearted, more comedic issues, this one focused on the female X-Men while next issue will focus on the men.

The Chronology Corner
The second story in X-Men Annual #13, which depicts Jubilee's arrival in the X-Men's outback town, takes place between this issue and the next.

A Work in Progress
Jubilee mentions that she was an accomplished gymnast at her high school, which will be a convenient way to explain away the acrobatic feats she'll eventually perform as a superhero. 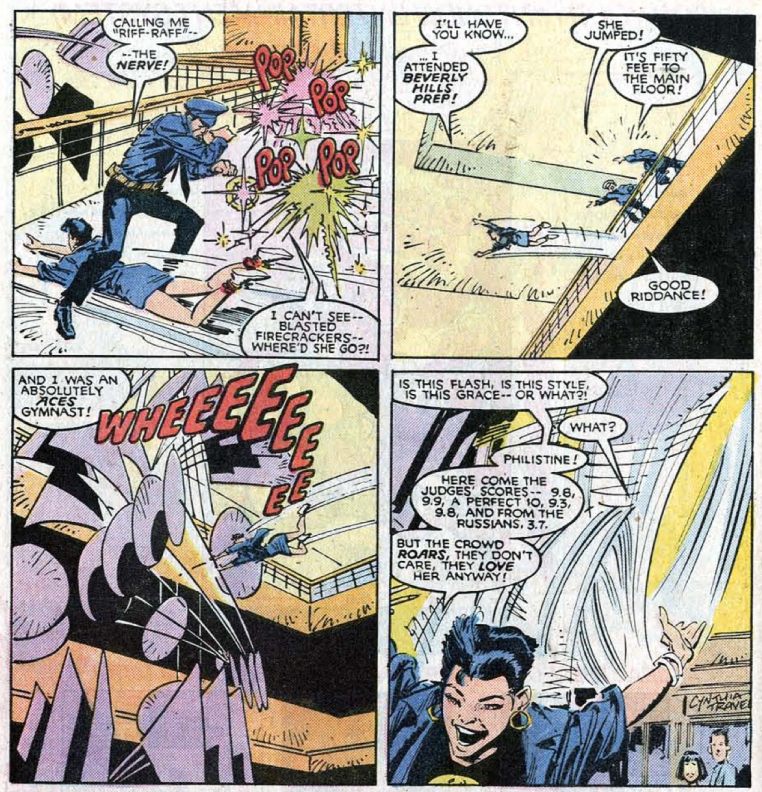 Carol Danvers-as-Rogue has redecorated Rogue's room to her taste, much to Rogue's dismay, prompting Rogue to ask Psylocke to wipe Carol out of her head, but Psylocke says she can't, as even reading Rogue's mind is difficult for her, and Storm adds that having to deal with the frustrations of sharing her body with Carol is just punishment for having essentially killed Carol, accident or not.

Resuming control of Rogue's body, Carol says that Rogue's encounter with the magistrates in Genosha "wasn't serious" but the helplessness she felt still freaked her out, and that the events of "Inferno" brought all that to the surface again, forcing Carol to take control.

Wolverine's frequent "walkabouts" are mentioned, perhaps a reference to the adventures he experiences in his ongoing series. 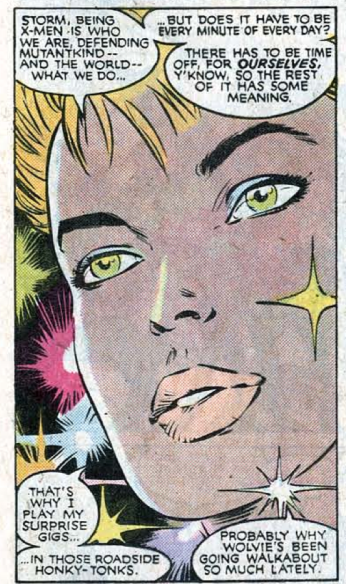 M-Squad mentions the events of "Inferno" having happened "last summer", suggesting a fair amount of time has passed between last issue and this one, though I don't think that's truly the case. Then again, depending on how you define the end of summer, if you consider Labor Day to mark the end of the season, I could say that what I did Friday night happened "last summer" as of yesterday. 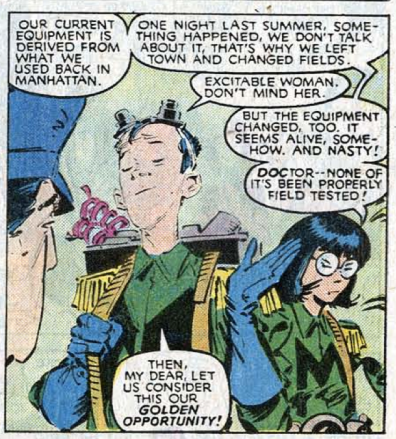 Jubilee follows the X-Ladies through Gateway portals, and it's suggested that Gateway intentionally left it open longer for her. 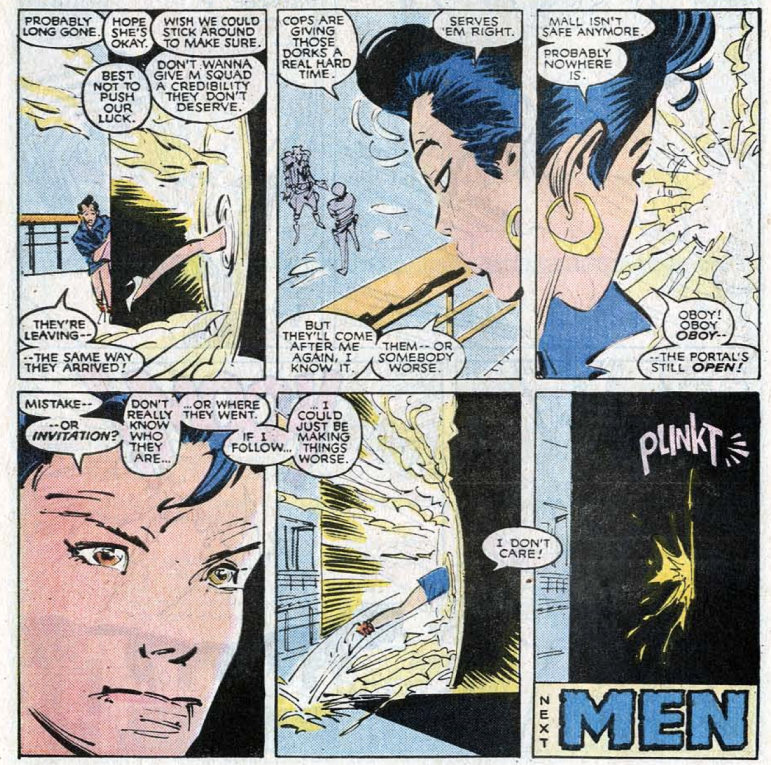 I Love the 80s
A group of teens on skateboards help Jubilee evade the mall cops. 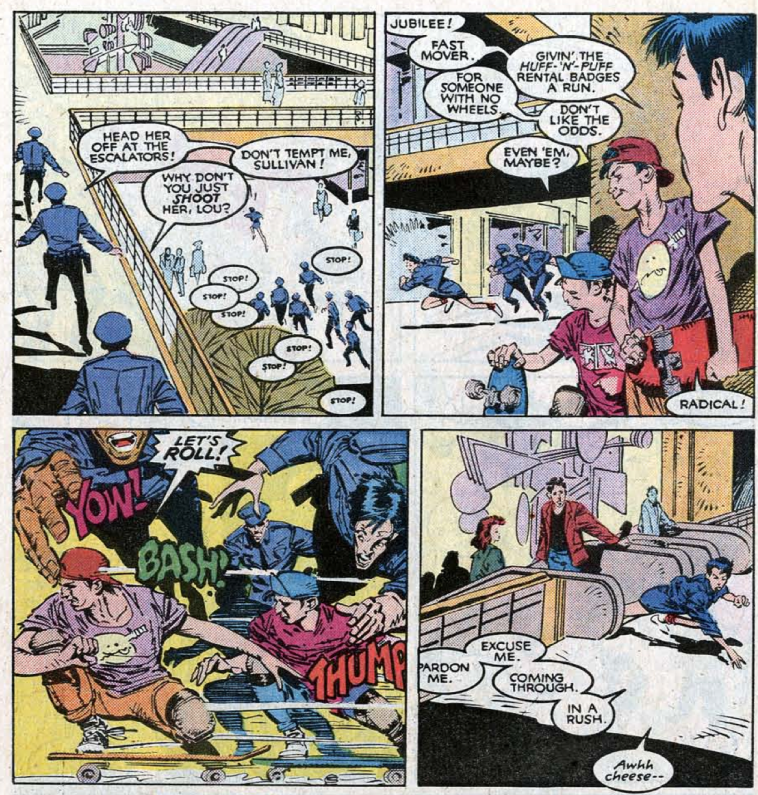 Also, the mall cops are armed with pistols, which seems extreme for mall cops. I'm pretty sure even the Mall of America cops only have tasers and whatnot.

Storm has no time to prevent herself from crashing into Betsy's room, but she does have time to think about not having time. 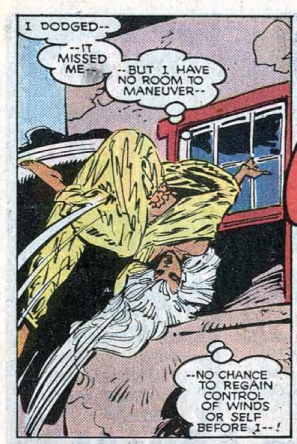 The Ghostbuster inspiration becomes even more apparent when we see M-Squad's car. 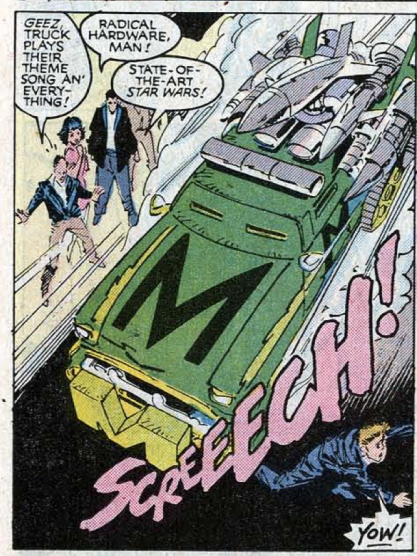 The X-Ladies get new hairdos this issue, with Psylocke getting a perm. 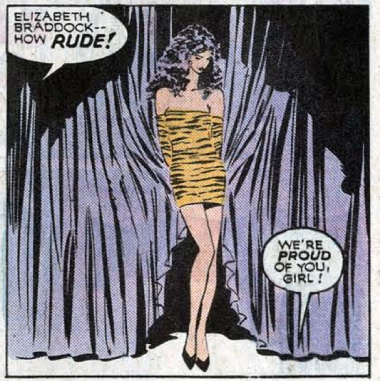 This issue suggests there's a male quasi-strip club called Hotbods at the Hollywood Mall; not sure if that was ever actually a real place or not. 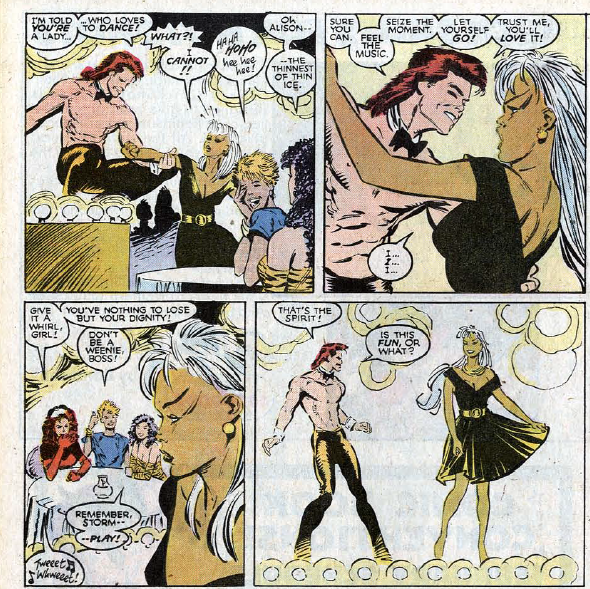 Human/Mutant Relations
Psylocke looks to Jubilee as an example of the X-Men's mission: if they won't stick up for mutants like her, who will? One could read this as a larger statement on the X-Men's post-school, post-mansion purpose. 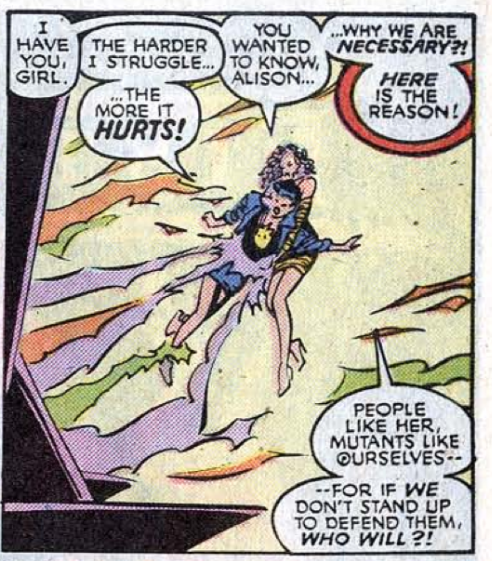 For Sale
An ad for Wolverine's upcoming appearance in the Jim Lee-drawn Punisher War Journal appears in this issue. 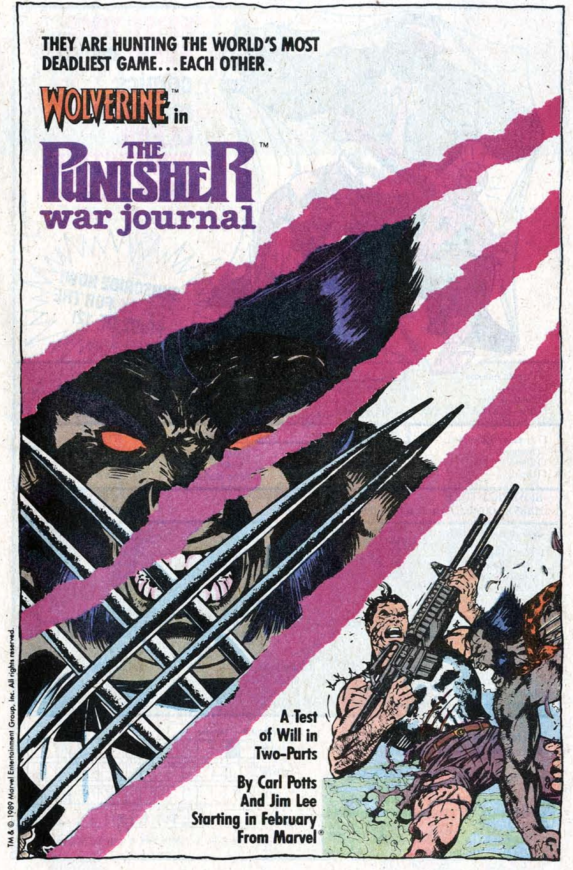 Teebore's Take
Rather than a proper "Inferno" epilogue (which X-Factor gets in issue #40 and New Mutants got in issue #74), with this issue (and the next) Claremont and Silvestri provide a tonal palette cleanser, offering a more lighthearted and comical story in contrast to the death, despair and darkness that permeated the series for the previous four months. Even the cover gets in on the act, resurrecting old school dialogue bubbles as the X-Ladies shriek in terror at the "might" of M-Squad. Of course, this being the Outback X-Men of 1989, the ensuing story doesn't quite reach the levels of Silver Age absurdism, and even Jubilee in her debut isn't as over-the-top as she would later be portrayed on occasion, despite the sillier story.

Along with her debut, having Silvestri on hand to draw the issue helps prevent it from feeling like a throwaway, post-crossover fill-in. While I may have preferred a more formal "Inferno" epilogue, something which spent more time on the reunited X-Men and X-Factor, more immediately addressed Havok's angst over Maddie's passing or further explored the notion that the changes wrought on the X-Men by the conflagration were more than cosmetic, as a fun little break from all the darkness and an introduction to a new character, this works well enough.

Next Issue
Tomorrow, the New Mutants hand in their resignation letters to Magneto in New Mutants #75 and Friday, X-Factor battles Nanny and the Orphan Maker in X-Factor #40. Next week, the Cyclops feature in Marvel Comics Presents #17-24.
Newer Post Older Post Home
Posted by Austin Gorton at 12:00 PM