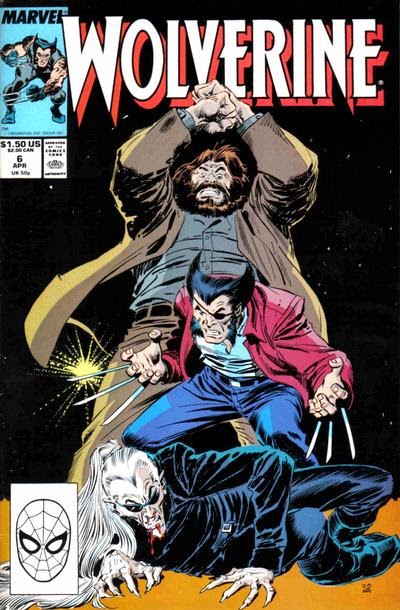 In a Nutshell
The gang war escalates into a confrontation inside the prince's palace.

Plot
In the midst of a storm, Karma uses her power to infiltrate the palace of Madripoor's prince, hoping to free Tyger Tiger, Jessica Drew and Lindsay McCabe, captured by her uncle and taken to the palace. When her concentration falters for a moment and the guard she's possessed regains his senses, Karma is saved by the timely arrival of Wolverine and Archie Corrigan, having tracked the women's scents to the palace. Deeper inside, General Coy toys with Jessica and Lindsay before giving them an ultimatum: kill Tyger Tiger for him, and they can go free. Just then, Wolverine intervenes, and is attacked by Roughhouse and Bloodscream. 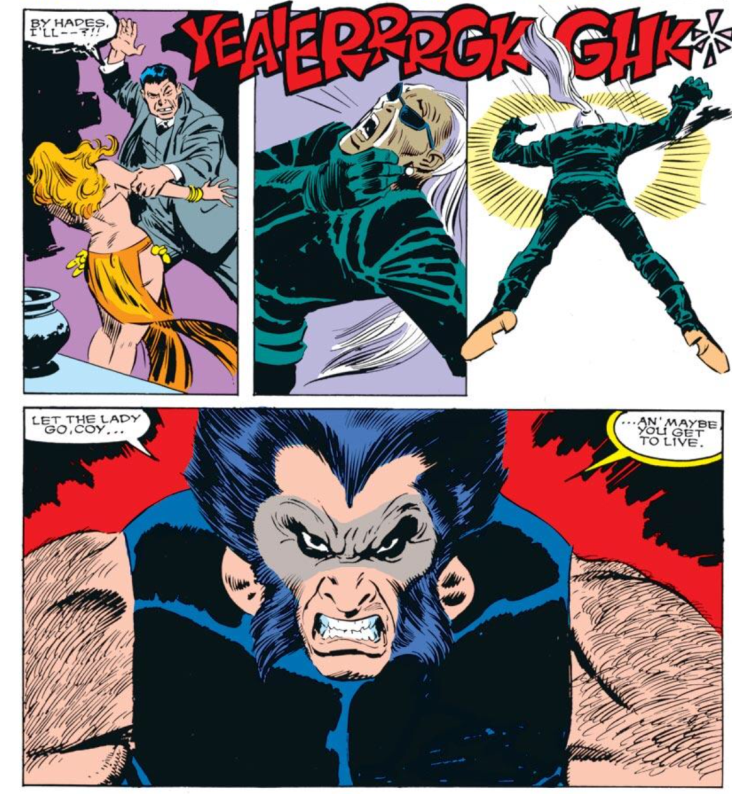 Wolverine uses his claws to briefly knock out Roughhouse, but then Bloodscream begins draining his blood. Karma attempts to possess the vampire, but is unsuccessful, and then a recovered Roughhouse grabs Wolverine and tosses him into the courtyard, saying neither he nor Bloodscream can be killed by mortal steel. Together, Jessica and Tyger take out Bloodscream, then Jessica helps Wolverine fight off Roughhouse. However, all three are knocked into a nearby pool and attacked by a tentacled creature, and Wolverine is forced to use his claws to free Jessica. Back on land, Wolverine is forced into a berserker rage to defeat Roughhouse, and then he tosses the unconscious villain at General Coy's feet alongside Bloodscream. Coy tries to bargain with Wolverine, but before Wolverine can do anything, they're interrupted by the prince, who declares only he has the power to decide who dies on Madripoor.

Firsts and Other Notables
The much-discussed Prince of Madripoor appears for the first time, on the final page of the issue. He reminds me of Zanzibar, the Dreadnok pirate from GI Joe. We'll eventually learn his name is Baran. 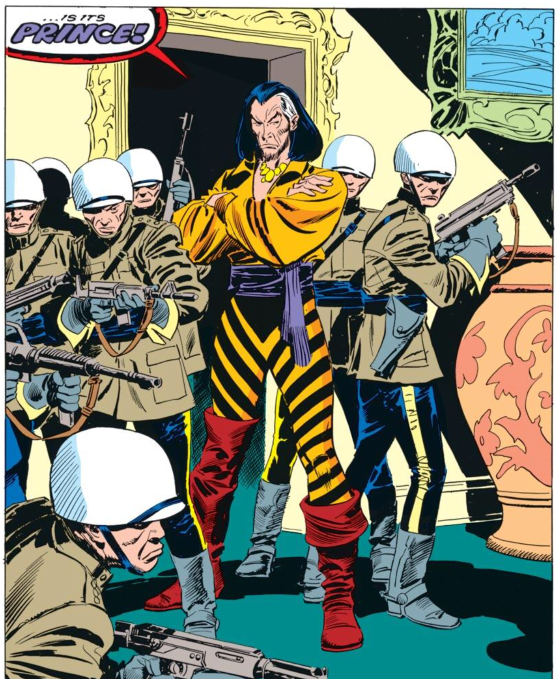 Karma explains to Wolverine that she's working for her General Coy in the hopes that his criminal connections will give her a lead on the location of her missing siblings, having exhausted all options. However, her encounter with Wolverine in issue #4 has convinced her she can no longer standby and do nothing to stop her uncle. 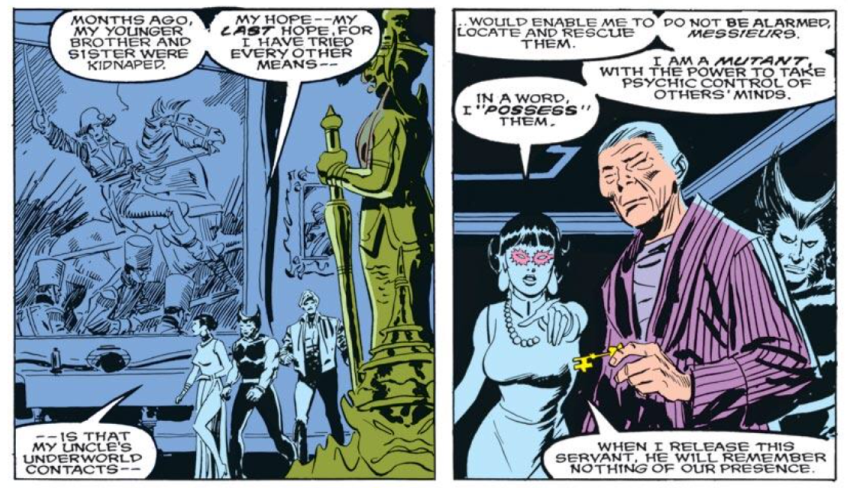 This issue features a Wolverine pin-up by Todd MacFarlane.

A Work in Progress
This issue makes it clear at one point that Karma needs eye contact to take control of someone, though I don't think that's always been the case. 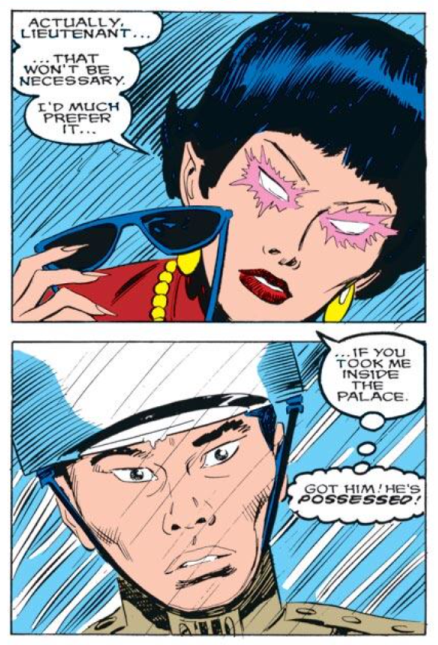 The prince has some bizarre tentacled creature living in a surprisingly deep fountain at his palace. 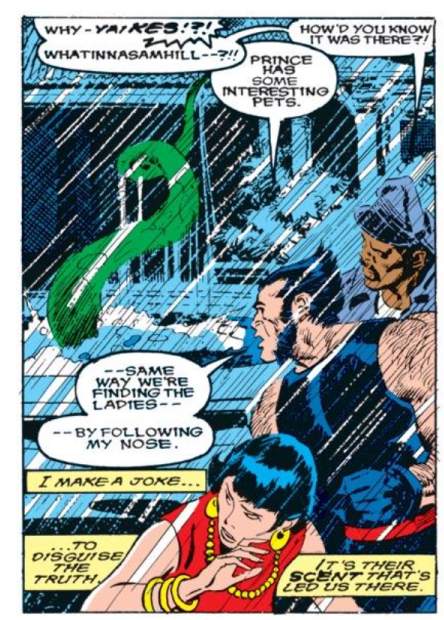 Roughhouse curses "by Ymir's icy breath", another hint at his Asgardian heritage (Ymir being a notable Frost Giant). 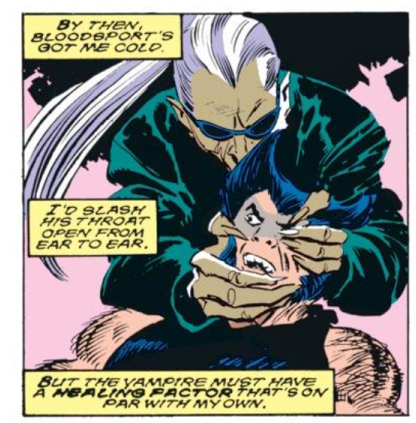 Both Roughhouse and Bloodsport are said to be invulnerable to mortal steel. 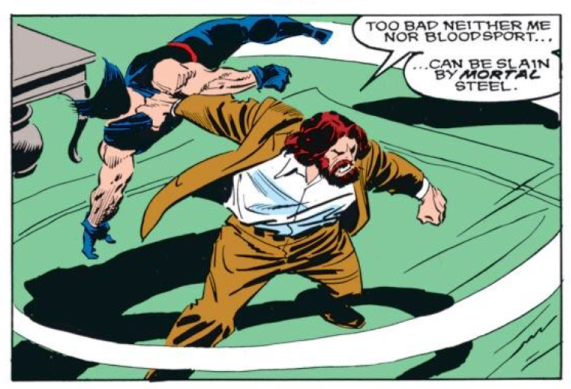 Tyger Tiger is now wearing the Psylocke armor, having been put into it between issues by Lindsay. This set of armor has face mask that seems to offer more protection than Psylocke's. 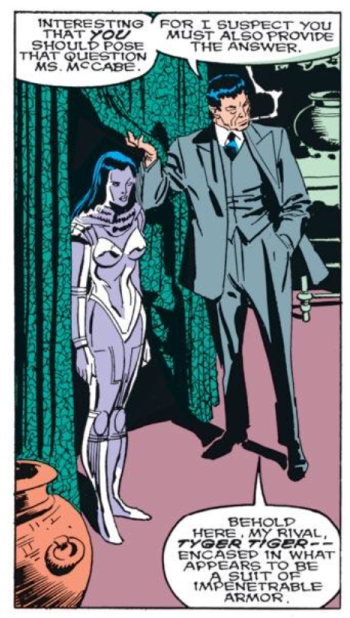 Artistic Achievements
As Jessica throws off Roughhouse, the accompanying sound effect is "heave".

The Best There is at What He Does
At one point, Wolverine slips into a berserker rage to defeat Roughhouse. 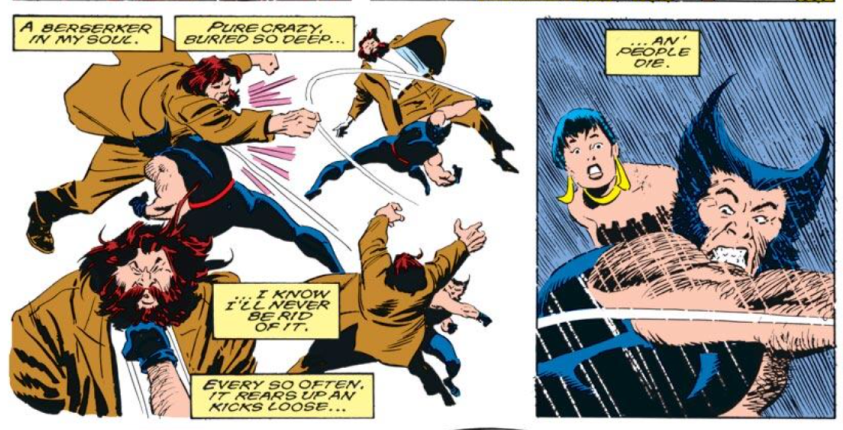 Wolverine hopes that Jessica doesn't see his claws, as they will blow his cover as Patch. Because his short stature, quick healing, speaking style and ludicrous hair won't. 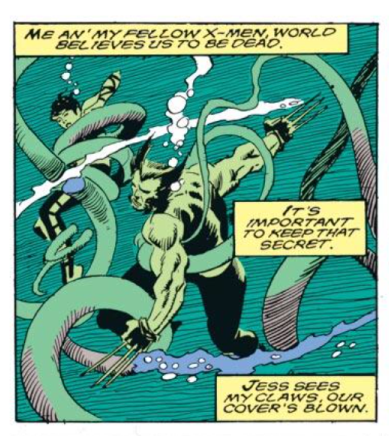 Teebore's Take
For the first time since this storyline began, this issue finds all the players gathered in one place (at one point, in the same room). While the last page appearance of Madripoor's prince makes it clear that this storyline isn't quite over yet, this culmination of characters helps keep the plot moving forward. Even with a cliffhanger, having all the disparate characters come together creates a sense of culmination, that the previous two issues were building towards this. With a storyline that will now be running at least four issues, there's a risk of things feeling padded or drawn out, but so far, this story has managed to avoid that. As a result, the prince's last page reveal feels like a logical progression of the arc, less "oh god, this story still isn't over?" and more "hmm, I wonder where this will go next?", which is certainly the intended effect.

Next Issue
Next week, the X-Men go to the mall in Uncanny X-Men #244, the New Mutants quit school in New Mutants #75, and X-Factor battles Nanny and the Orphan Maker in X-Factor #40.
Newer Post Older Post Home
Posted by Austin Gorton at 12:00 PM