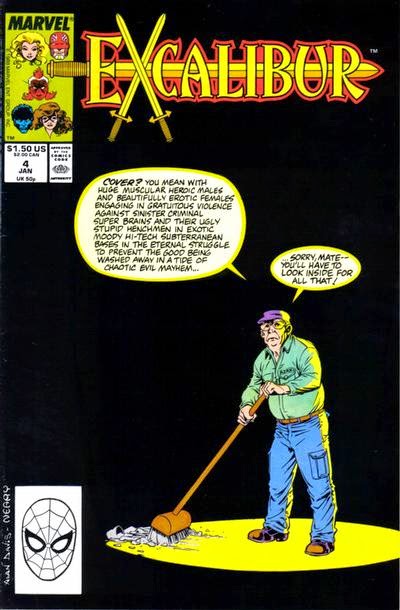 "Still Crazy After All These Years"
January 1989

Plot
While reminiscing about her past with Captain Britain, Courtney Ross is attacked in her office by the Crazy Gang. She manages to get past them and out into the street, only to be captured by a waiting Arcade. The next day, Kitty and Rachel are shopping when Kitty realizes the money she took out of Courtney's bank was made by Arcade. Meanwhile, at the lighthouse, Kurt and Meggan flirt as Kurt builds a jungle gym, with the pair almost kissing just before the rest of the team comes home. Kitty shows everyone the money, from which they deduce that Arcade, looking for revenge on Captain Britain, has captured Courtney, and where to find her. Brian, enraged, attempts to fly off in a rage but Rachel holds him back as Kurt points out that Arcade clearly wants them to come after her, so they must find a way to beat him at his own game. 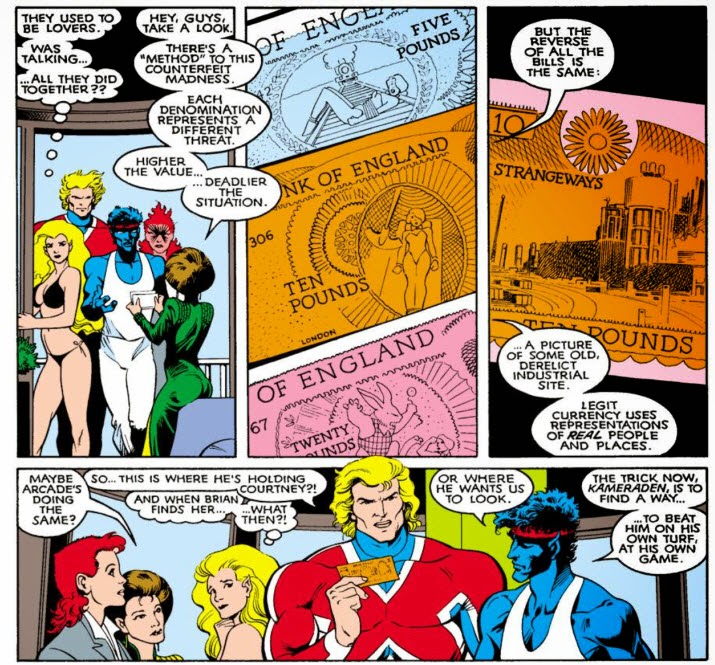 Elsewhere, beneath an abandoned steel mill, Arcade sends Courtney into Murderworld. To the north, Callisto and Moira MacTaggart are aboard a train to London, hoping to discuss some odd medical scans Moira took of Phoenix with the team, when Widget teleports away the entire train. Meanwhile, Excalibur arrives at the steel mill and confronts the waiting Crazy Gang. But the villains use a device to swap their minds with Excalibur's, capturing all but Shadowcat and Lockheed. As they bring the unconscious heroes, trapped in the Crazy Gang's bodies, inside Murderworld, Arcade gloats that before he's through, he'll have Shadowcat and her dragon, too.

Firsts and Other Notables
The Crazy Gang, a group of thieves and mercenaries inspired by Lewis Carroll's Wonderland stories, who are all rather crazy, appear in an American comic for the first time - they previously appeared in Captain Britain's Marvel UK series, with ties to both Mad Jim Jaspers (who created them) and Slaymaster, the villain who took Psylocke's eyes. Tweedledope, who appeared in issue #1 playing with Widget, is a member of the group. 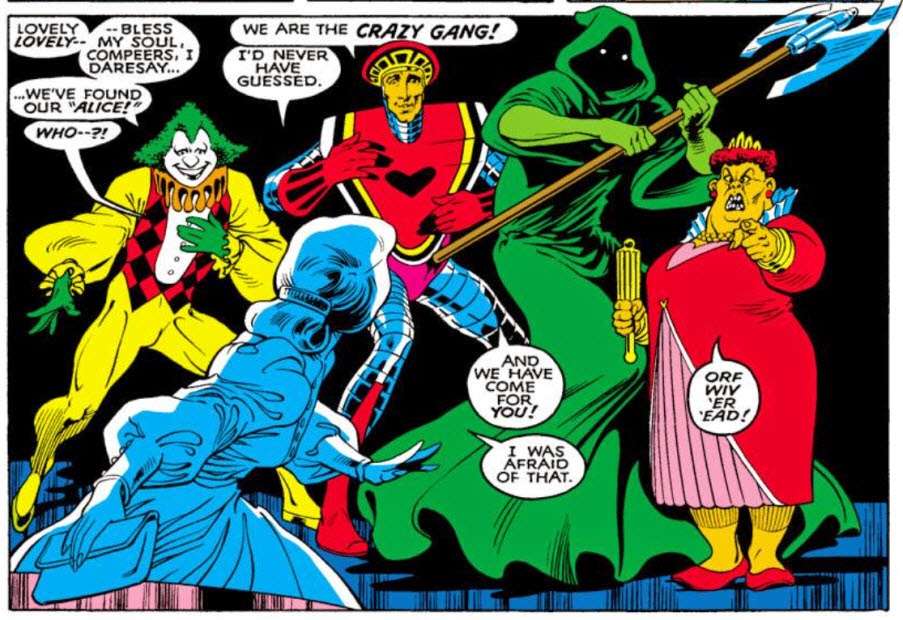 Arcade returns in this issue, targeting Captain Britain out of revenge for his initial defeat at the hero's hands, and is joined as usual by Miss Locke. Arcade has built a new Murderworld underneath an abandoned steel mill in England. 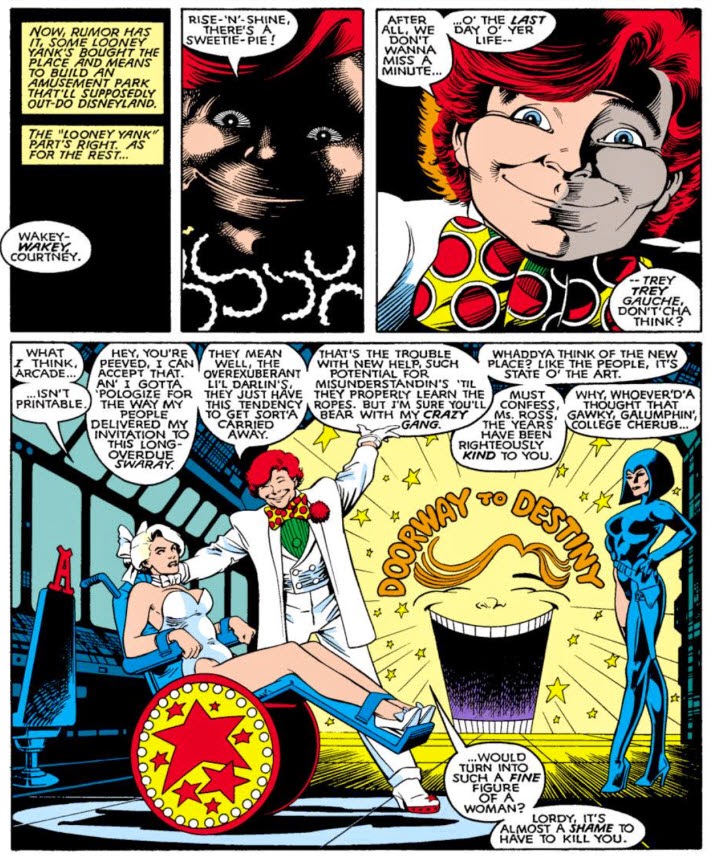 Rachel hears the psychic cries of her pseudo baby brother (presumably the same ones Jean Grey is using to track him in X-Factor), a reference to the events of "Inferno" and the setup to Excalibur's involvement in that storyline. It's also worth noting that Rachel refers to her brother as "Nathan" (his actual given first name) and not "Christopher" (his first middle name, which has been chiefly used so far in other books).

The "Callisto and Moira get transported somewhere by Widget" interlude is, I believe, setting up a future story involving that most classic of all alternate realities, triumphant Nazis, though I don't think the whole "anomaly in Rachel's mediscans" business that has them racing to London in the first place ever goes anywhere (I've read that Claremont intended to reveal that Rachel had no father, and was simply a child of Jean Grey/the Phoenix force, but left the book before he had a chance to establish that). 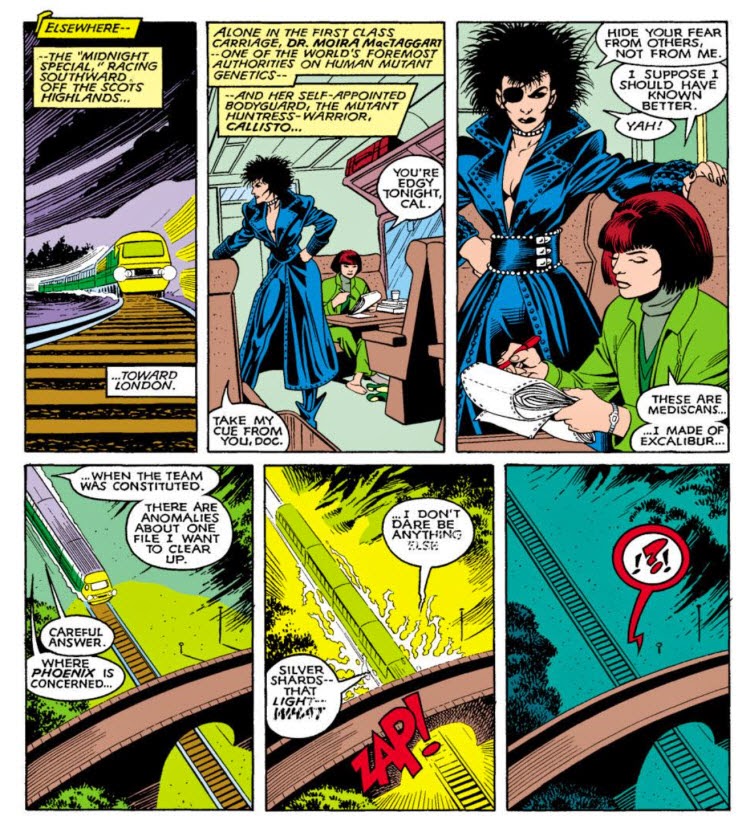 We get our first outright "comedy" cover this issue, with no attempt made to even hint at the story inside in favor of the gag. The back cover features Meggan.

A Work in Progress
It's revealed that Captain Britain has set up each of the members of Excalibur with a bank account at Courtney Ross' bank (and presumably put money in it for them).

In a nice bit of world building, it's noted that the plant which Arcade bought as a front for Murderworld shut down in part because Genosha can manufacture steel cheaper.

Kitty refers to Brian and Meggan in her thoughts as "the bimbos". 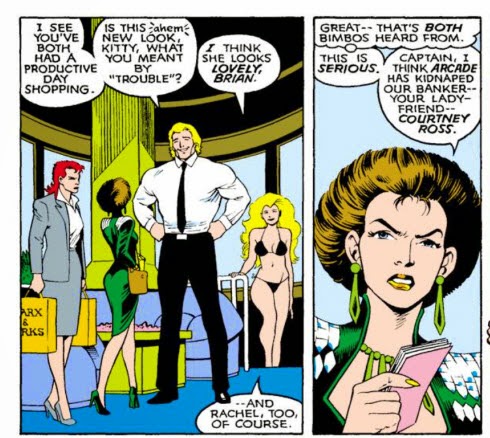 Enraged at learning Courtney has been kidnapped, Brian flexes to the point that his shirt buttons pop off.

We actually see a normal person die in Murderworld for a change, suggesting that even while Arcade is plotting revenge and/or getting defeated by superheroes, he's still paying the bills by taking on normal assassination contracts, and thus validating the continued use of "Murderworld" instead of "EscapedFromItAfterBeingMildlyInconveniencedworld". 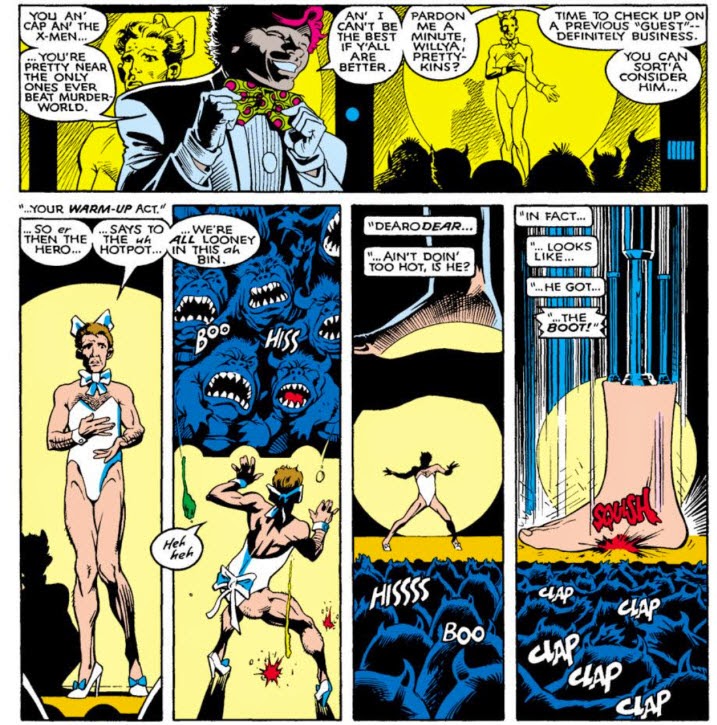 The brief subplot interlude says that Callisto, last seen on Muir Island with the X-Men in X-Men #217, is functioning as Moira's bodyguard.

I Love the 80s
Kitty bemoans a clothing store not accepting credit cards (and that may or may not be Hitchcock walking the dog on the right. Not that he's from the 80s).

Claremontisms
As Nightcrawler tickles Meggan, Claremont (or Orzechowski) does that trick where the words within the balloon vary in size to indicate rising and falling volume. 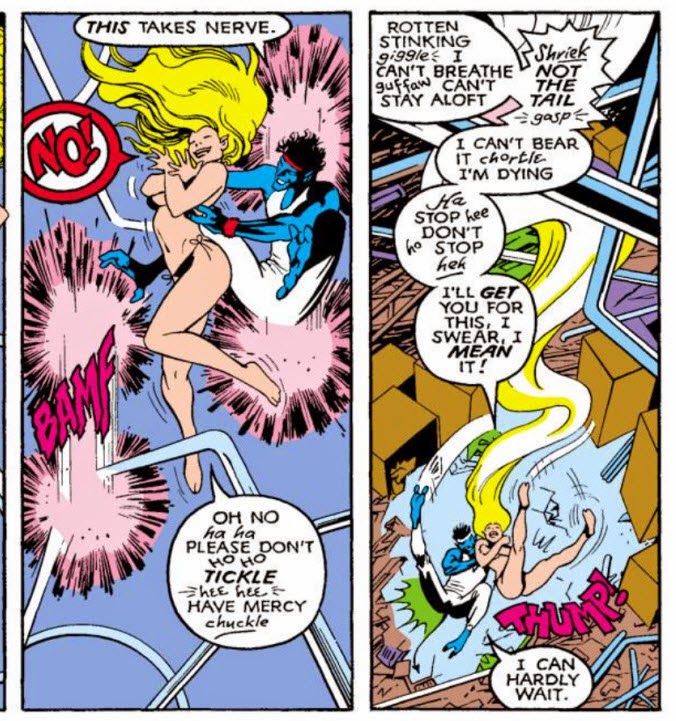 The Crazy Gang uses a device which swaps their minds with the minds of Excalibur. . 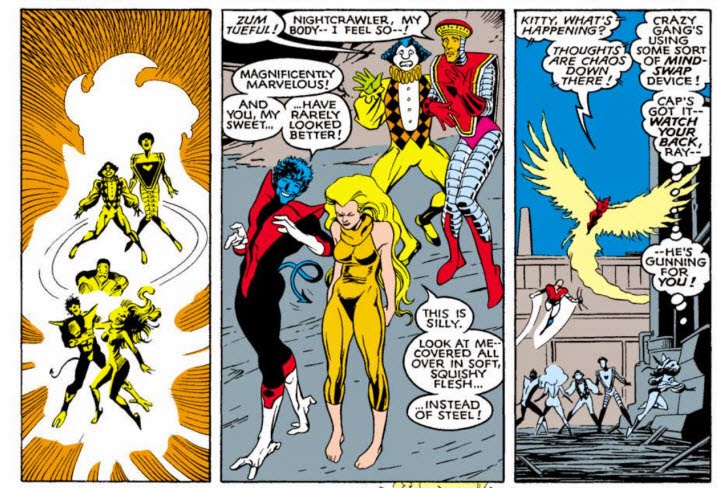 Baby Nathan's cry hits Rachel in "the totality of her being".

A Minnesota Yankee in the English Court
The only reason Arcade's fake money isn't immediately noticeable to Kitty is because regular English money is multicolored, something Kitty notes when withdrawing it.

Young Love
Nightcrawler and Meggan grow closer this issue, flirting with another and almost kissing, with Meggan subconsciously shifting her form to resemble Kurt's, before being interrupted. 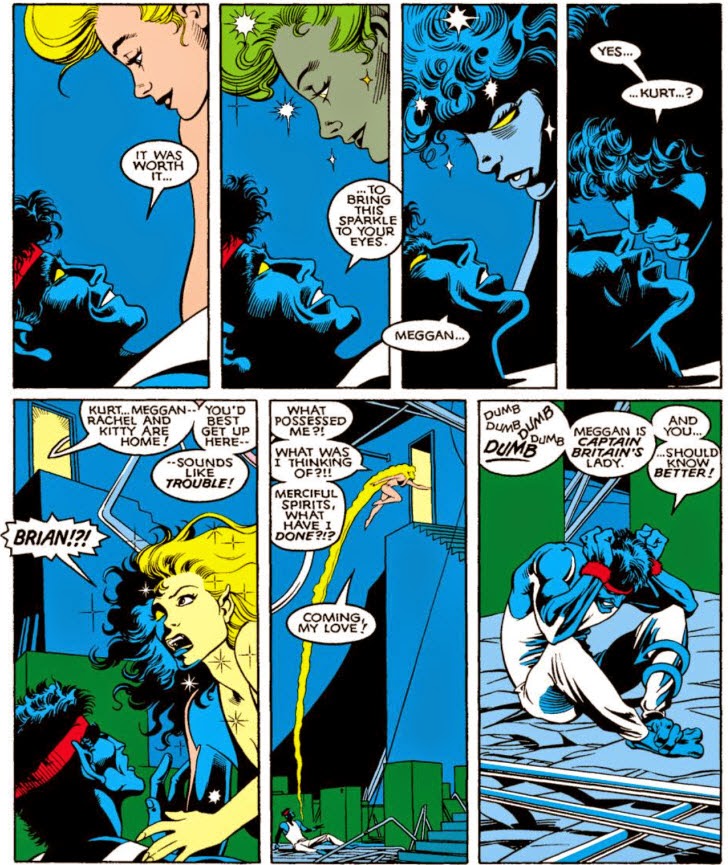 Meggan, meanwhile, is worried by the concern Captain Britain shows for Courtney, wondering if everything is truly over between them.

Teebore's Take
After last issue's Juggernaut appearance, this one brings another old X-villain into the book in the form of Arcade. I'm not the world's biggest Arcade fan, but his inclusion in this series makes sense: his history with Captain Britain (stemming from the villain's first appearance) predates even his rivalry with the X-Men, and his whole Murderworld schtick has always been more absurdist than realistic, which fits the tone of this book much better than it would X-Men at this time. Arcade is teamed-up with the Crazy Gang, a group of villains from Captain Britain's UK series, and in doing so, Claremont continues to wed elements of both the Captain Britain mythos with the X-Men mythos via his use of villains (after Technet and Mojo in the Special Edition, then Vixen and Juggernaut last issue). Seeing as how this series is built on the fusion of those two elements, this makes sense, though it does also add to the continued problem of the book lacking a strong identity for itself beyond the vague "more lighthearted than X-Men, and in Britain" feel. But maybe that, plus the more whimsical tone, is enough.

Next Issue
Tomorrow, we wrap up the series' initial story arc in Wolverine #3. Next week, Madelyne has it out with Mr. Sinister in Uncanny X-Men #241, followed by Illyana hashing it out with N'astirh in New Mutants #72.
Newer Post Older Post Home
Posted by Austin Gorton at 12:00 PM