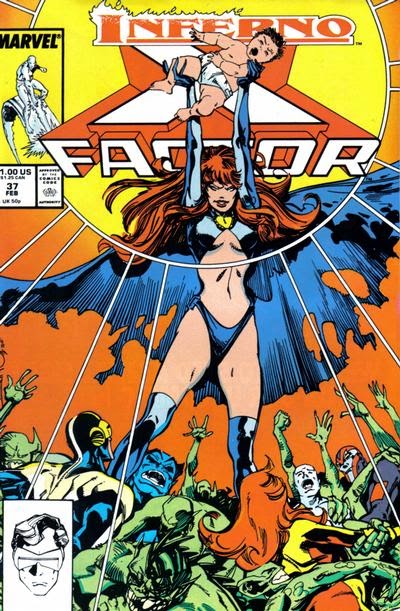 In a Nutshell
X-Factor battles the Goblin Queen

Plot
In New York, X-Factor battles demons while on the trail of Cyclops' infant son Christopher. They draw nearer just as a demon delivers him to N'astirh. He then teleports away with the child, only to return moments later, joined by Madelyne in her Goblin Queen attire. Calling out Cyclops for abandoning her and their son, she attacks the team. X-Factor defends themselves, but holds back from harming Madelyne at Cyclops' insistence. When Madelyne realizes Marvel Girl is sharing the baby's thoughts, she blasts her, but N'astirh blocks the attack, hoping to keep X-Factor alive longer, in order to continue to goad and enrage Madelyne. She turns on her ally, declaring she is no longer his puppet. N'astirh teleports away, not caring what she is, so long as she does what he's set her to do: sacrifice her son to unleash his power and blast a permanent hole to Limbo. 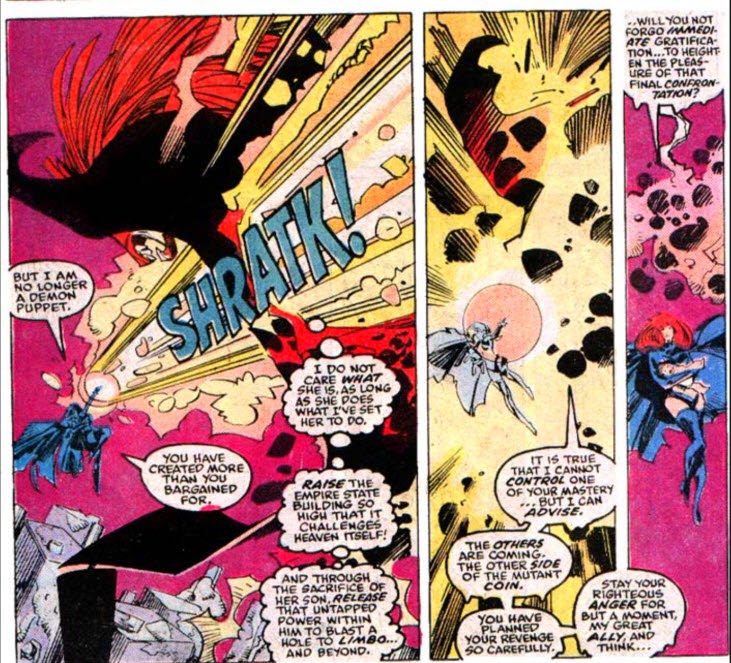 Turning her attention back to X-Factor, she declares that she intends to destroy her child, the thing Cyclops loves most, and all his hopes along with him. Realizing Madelyne needs to be stopped any way they can, Cyclops orders X-Factor to spare Madelyne if they can, but to save his son no matter what. As they attack the Goblin Queen, she triggers a massive explosion, sending the team hurtling into the ground. As the dust settles in the crater her blast created, they see Madelyne standing on the edge, in her normal guise, asking why Cyclops is trying to take her baby from her. Just then, Marvel Girl feels a hand on her shoulder, as Wolverine declares he's confirming what his other senses are telling him, making sure that she's real.

Firsts and Other Notables
Madelyne appears in person for the first time in the series since issue #1, finally confronting Cyclops and the rest of X-Factor over Cyclops' abandonment of her, while Jean Grey and Madelyne meet for the first time. 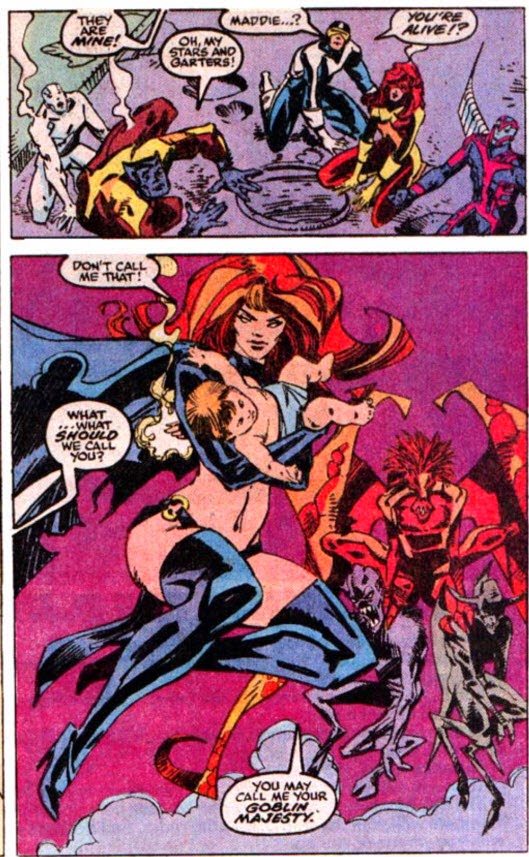 The ending of this issue teases the long-awaited reunion between X-Factor and the X-Men, though the bulk of that reunion occurs in Uncanny X-Men #242. 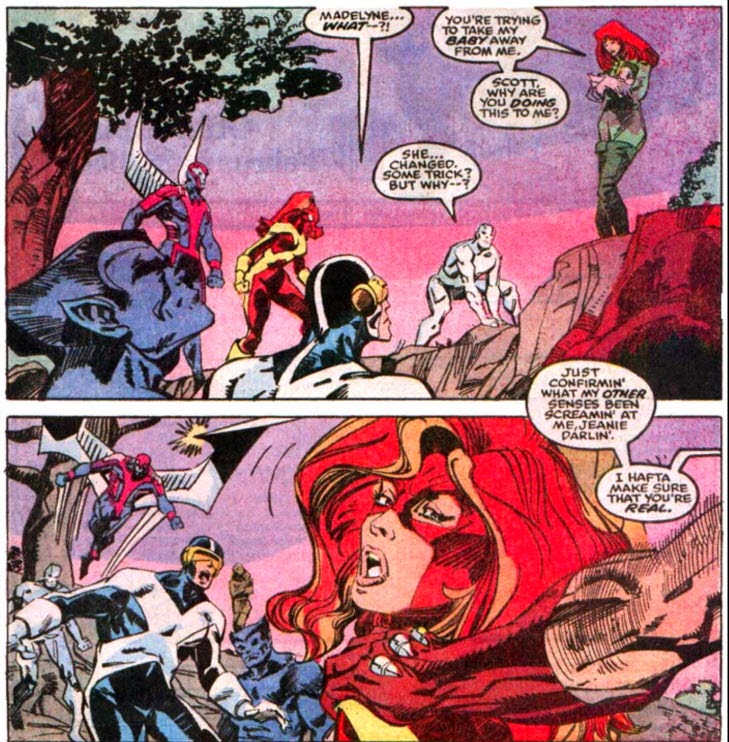 N'astirh's overall plan for Madelyne, hinted at in Uncanny X-Men #241, is made clear: he needs her to sacrifice her son atop the Empire State Building in order to permanently bond Earth with Limbo.

It's noted that Cyclops' son is named for his grandfathers, and Madelyne says that he never liked the name Nathan because it reminded him of his childhood bully, which explains why he and Jean usually refer to the boy as Christopher. However, by the time the whole "Cable is Cyclops' son from the future" business is revealed, Cable will use the name Nathan exclusively. 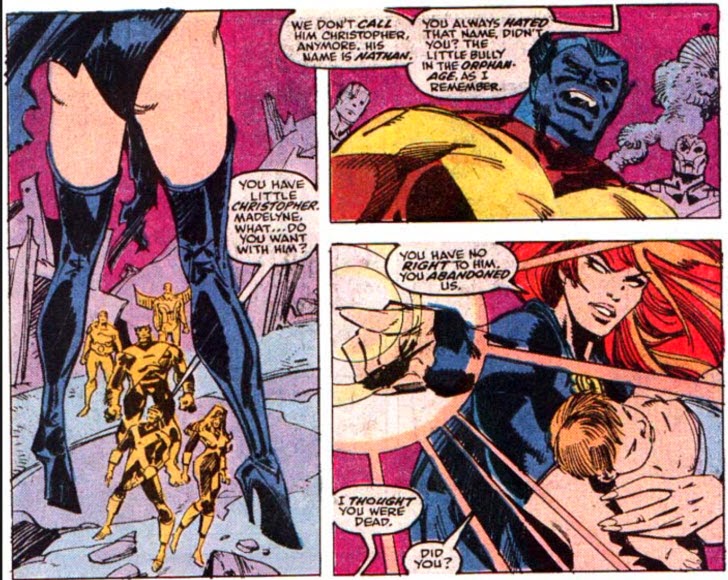 The Chronology Corner
N'astirh appears here to receive Christopher, then disappears to give him to Madelyne as seen in Uncanny X-Men #241, at which point Madelyne, baby in tow, shows up to battle X-Factor, and N'astirh follows along behind her.

The ending of this issue leads directly into Uncanny X-Men #242.

A Work in Progress
With the portal between Limbo and Earth closed (thanks to events in X-Terminators #4 and New Mutants #72), Marvel Girl notes that the demon effect is lessening. 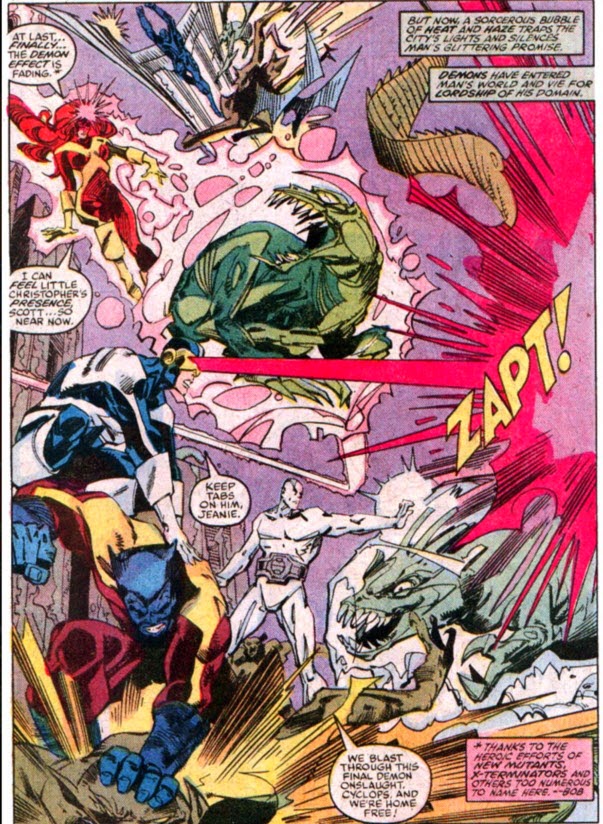 Reiterating what he said in New Mutants #72, the techno-organic N'astirh declares he is now comprised of magic. 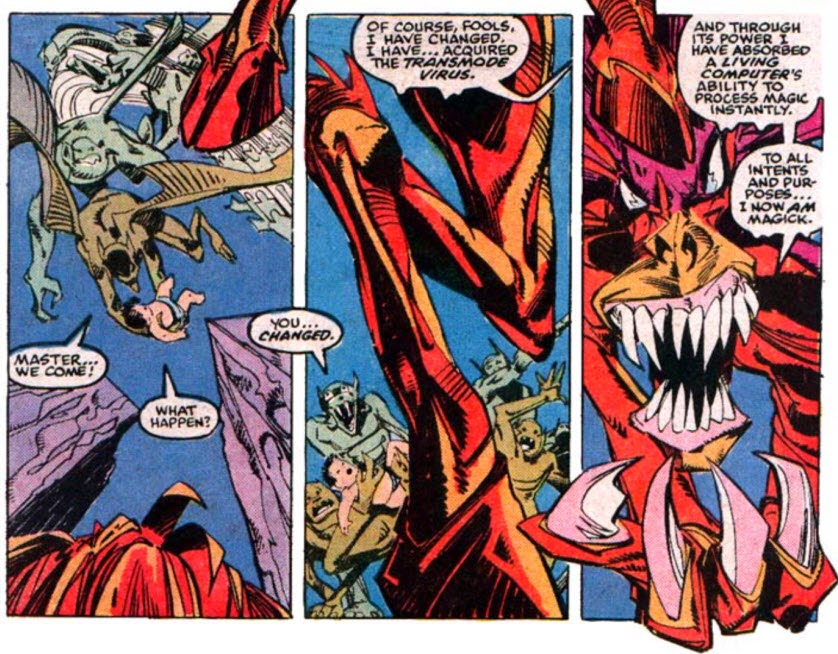 N'astirh notes that it was easy to subvert Madelyne to his will. 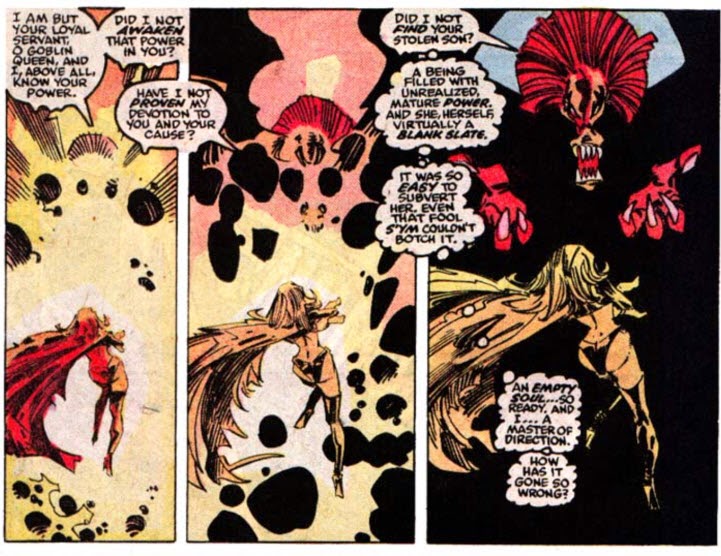 Beast sheds his yellow-and-brown X-Factor costume in this issue, presumably to make his movements less restrictive while battling demons, but it's the last time we'll see him in it.

It's stressed that Madelyne's current villainous actions are a result of her manipulation by N'astirh, saying he distorted her. 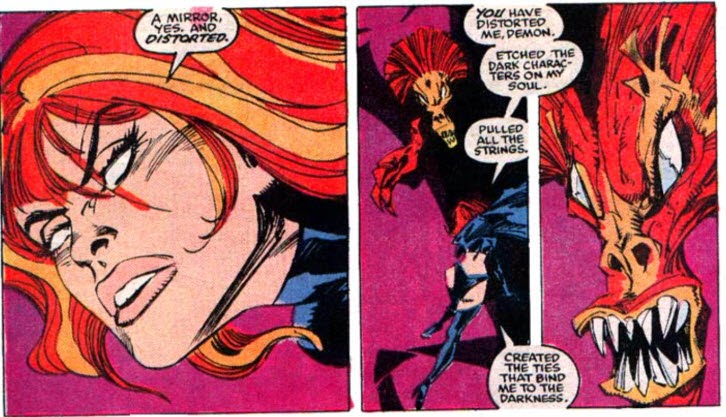 Beast and Iceman perform a slightly-more literal fastball special of their own. 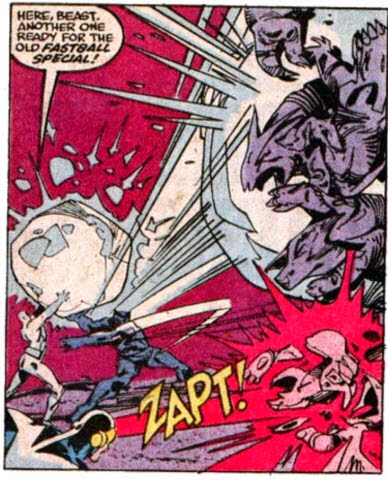 Marvel Girl encounters her demonically-transformed parents in this issue. 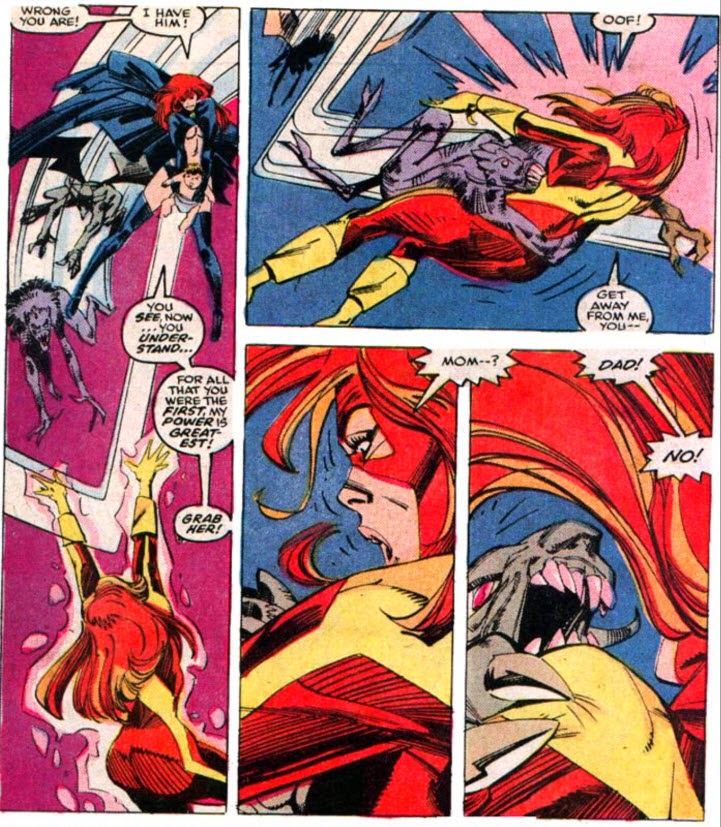 Teebore's Take
Despite only physically appearing in one previous issue of this series, Madelyne Pryor has loomed large over this book: Scott Summers uncharacteristic abandonment of her in issue #1 (and the subsequent ignorance of that fact in later issues) colored the disappointing early issues of the series as much as the ill-advised mutant hunter premise, and then the Simonsons ensured that throughout their rehabilitation of the series, the question of Cyclops' treatment of his wife was never left too far afield. Though her role as a villain, starting in this issue, probably burns too fast and too hot for consideration as one of the series' major arch villains, her long-awaited confrontation with the team in this issue feels momentous nonetheless.

Maddie's role in this crossover as a villain is problematic, to say the least, but there's complexity to it that keeps it captivating despite some of those problems. In this issue, even while we're rooting against her for wanting to sacrifice her son in a demonic ritual, we can't help but feel her rage towards the husband who abandoned her family, and the friends who, directly or indirectly, encouraged him to do so. While we can't ultimately root for Maddy to succeed (because, again, demonic infant sacrifice), nor are we being asked to, there's no denying that this issue feels like it was designed to serve as catharsis for those readers who felt Maddy got a raw deal by this series, an opportunity to share her rage at the title characters even while we're rooting for them to stop her evil plot. It's an interesting struggle between two vastly different narrative desires, and it adds some effective complexity to what could otherwise be a very one-note, and disappointing, heel-turn for a character who ultimately deserved better.

Next Issue
Next week, we look at the second batch of "Inferno" tie-in issues, followed by Excalibur #5 and Wolverine #4.
Newer Post Older Post Home
Posted by Austin Gorton at 12:00 PM