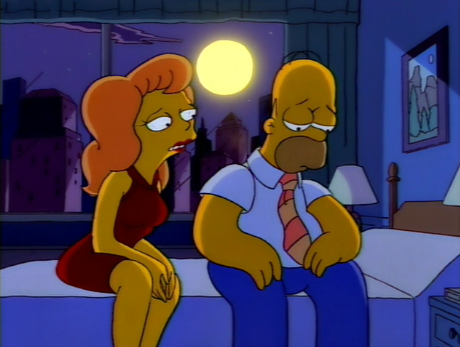 Or the One Where
Homer is tempted by an attractive new co-worker who shares his interests.

The Setup
After barely escaping from a gas leak, one of Homer's co-workers is fired, and when the Department of Labor calls into question Mr. Burns' dubious hiring practices, Burns is forced to hire a woman to fill the vacancy.

Notable Notes
The voice of Mindy is provided by Michelle Pfeifer, who was arguably at the peak of her popularity when this episode aired. She is one of the few characters on the show not to feature in a later episode.

The subplot in this episode involves Bart undergoing a series of medical treatments that end up transforming him visually into a nerd (thick corrective lenses, matted down hair, etc) for two weeks.

Quotable Quotes
Woman: This plant violates every labor law in the book. We found a missing Brazilian soccer team working in your reactor core!
Burns: That plane crashed on MY property!

Lisa: Dad, why are you singing?
Homer: [thinking] Tell a lie, tell a lie. [spoken] Um, because I have a small role in a Broadway musical. It's not much, but it's a start. [thinking] Bravo. [sarcastic clapping]
Lisa: Are you hiding something from me?
Homer: Like what?
Lisa: Judging from your song, you're infatuated with a woman named Mindy. Or a man named Andy.

Mindy: What's wrong?
Homer: Oh, yeah, like you don't know. We're gonna have sex!
Mindy: Oh. Well, we don't have to.
Homer: Yes we do! The cookie told me so.
Mindy: Well, desserts aren't always right.
Homer: But they're so sweet!

Teebore's Take
Stories in which Homer and/or Marge are tempted to stray outside their marriage are hardly new, even in the show's relatively young fifth season. Marge had one all the way back in season one, and Homer had to deal with the affections of Lurleen Lumpkin in season three. But this episode manages to put a refreshing spin on the tale to do something original with a staple story. Most of that comes from the character of Mindy, who is carefully positioned as a relative innocent. Unlike sleazy bowling instructor Jacques or the direct Lurleen, Mindy isn't forceful in trying to tempt Homer; she's as much a victim of her natural attraction to him as he is to her.

The episode also floats the idea, between Mindy's shared interests and Homer's dream sequence, that both Homer and Marge might be better off if Homer were to stray. Of course, we know that's not the case, and in the end, Homer stays faithful to Marge, but it feels less like a case of a sitcom keeping the status quo in place than it does a lesson on how romantic compatibility is more often than not about finding someone who complements you, rather than someone who is a carbon copy of you.

All of which is all well and good, but this episode is really notable for the classic "Joey Jo-Jo Junior Shabadoo" gag, which remains an oft-repeated joke amongst my friends.

Joey Jo-Jo would earn this one full props, but it's also a great episode that handles both Homer and Mindy well. 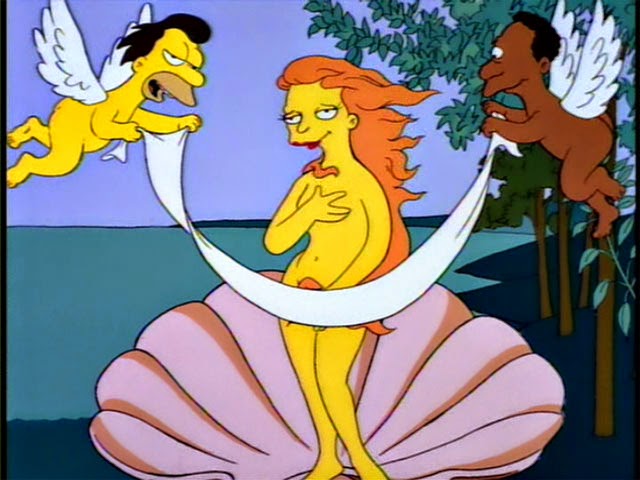