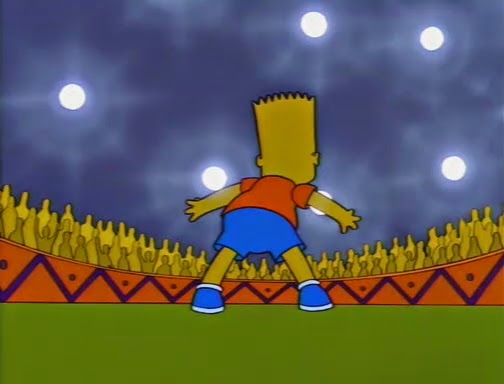 Or the One Where
Bart enjoys fifteen minutes of fame after saying "I didn't do it" on Krusty's show.

The Setup
During a field trip to the box factory, Bart sneaks off to visit the nearby Krustylu Studios and ends up becoming Krusty's personal assistant, eventually appearing on an episode of his show and declaring "I didn't do it" after accidentally knocking over the set.

Notable Notes
Conan O'Brien, who was of course a former writer on the show before leaving to take over Late Night, appears in this episode as himself. The writers decided to write him into the episode and put Bart on his show before they knew for sure whether O'Brien got the gig, and O'Brien himself believed his show would be cancelled before this episode aired.

Mayor Quimby's wife Martha, dressed in similar attire to that worn by Jackie Kennedy on the day President Kennedy was assassinated, appears for the first time in this episode.

The episode ends with a fourth-wall breaking montage of all the various characters' saying their catchphrases, a gag which, done in this day and age, could probably eat up an entire act of an episode.

This episode also introduced the practice of saying "yoink" whence pilfering an object, usually a food item, from an individual, as when Bart takes Kent Brockman's danish for Krusty, another one of those things that has become an ingrained practice in my life thanks to The Simpsons.

Back in yon ancient times, when I'd record Simpsons episodes on that ancient medium known to scholars as VHS tapes, the better to rewatch them at my leisure, I would tape a little notecard to side of the VHS box, listing the episodes in order so I would know what was on each tape. This was before any episode guides had come out, so I had to make up my own names for the episodes. For this one, I chose "Bart Gets Famous", and while it wasn't the only time I managed to match the episode name to the one the writer chose, for whatever reason, I always remember it as such. 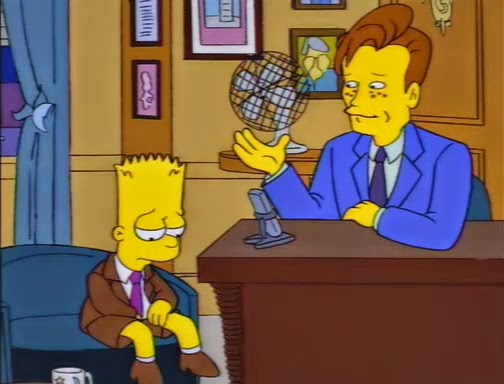 Quotable Quotes
Bart: Hey, that's my lucky red hat sitting on top of a double-corrugated, eight-fold, fourteen-gauge box!
Marge: Oh, it sounds like you really learned something on your field trip. Think you'd be interested in a career as a box maker?
Bart: Well, that'll always be the dream...

Lisa: And now you can go back to just being you, instead of a one-dimensional character with a silly catch-phrase.
Homer: [breaks a lamp] D'oh!
Bart: Ay, caramba!
Marge: Mmm.
Maggie: [sucks her pacifier]
Flanders: Heidely-ho.
Barney: [burps]
Nelson: Ha, ha!
Burns: Ex-cellent!
Lisa: ... if anyone wants me, I'll be in my room.
Homer: What kind of catchphrase is that? 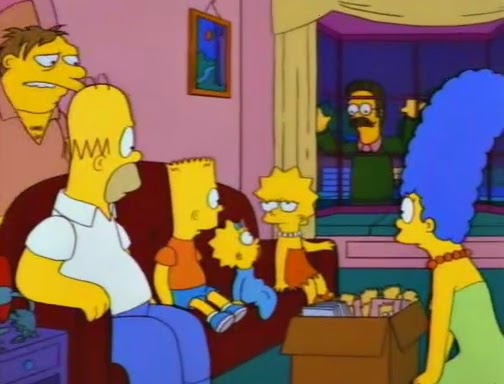 Teebore's Take
Like the season's previous Bart-centric episode (which also featured an immediate boon for Bart followed by his grappling with the ramifications of what at first seemed like a great thing), this one is just a tiny bit of a step down relative to the episodes around it. It's arguably one of the smartest-written episodes of the season, addressing the fleetingness of fame and the vapidity of pop culture fads along with numerous fourth-wall breaking moments and winks to the audience, in, at times, a surprisingly-melancholy manner.

Basically, it's an episode about Bart becoming famous at a time when Bart was famous in the real world, and the show was at or near (depending on who you ask) the height of its critical zenith. And, of course, there's some unintended humor in the show doing this kind of episode at what is, at this point, its 1/5th mark, when at the time the creators probably assumed they were at least at the halfway point of the show's life, and thus the time was ripe for some meta commentary on the show's success.

But in the end, while there's plenty of great bits throughout the episode (all the stuff at the box factory is top notch, including Homer's belief that Bart fell into a machine and became a box), because this is an episode during the show's Golden Age, after all, it's still an episode I respect more than I laugh at, an episode that, like the winking montage at the end, is more amusing than outright hilarious. And it's an episode, perhaps because of that undercurrent of melancholy running throughout, that never quite ingrained itself into my personal pantheon of all time greats, even as I appreciate what it's saying and how it says it.

Clever and well-written, but not quite as uproariously funny as the episodes surrounding it. 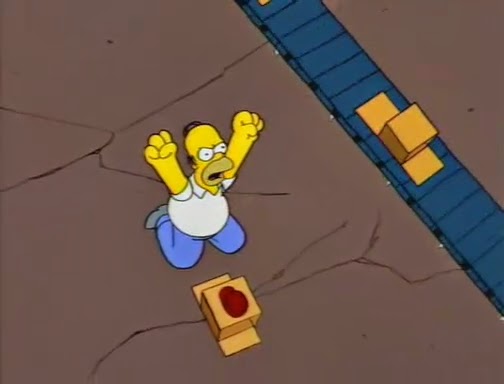