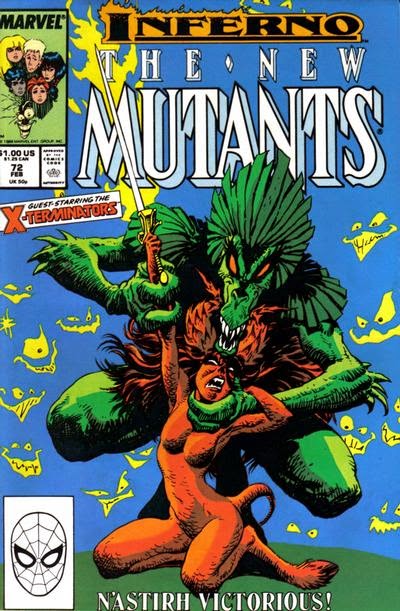 In a Nutshell
The New Mutants battle the demon rain as Illyana struggles with her dark side.

Plot
In Times Square, S'ym appears before N'astirh and the New Mutants, and the two demons begin to fight one another, with N'astirh teleporting Illyana away. Otherwise forgotten, the New Mutants attempt to disrupt the pentagram, reasoning that closing the portal between Earth and Limbo may very well help Illyana as well. Meanwhile, Illyana appears in a demonically-possessed diner, where inanimate objects urge her to use her sword to attack the possessed people inside before she is teleported away again. In the skies over Times Square, the New Mutants meet the X-Terminators, and the two groups team up to try and close the portal. Illyana next arrives in a demonic pet shop and is once again urged to use her sword, and she realizes the demons want her to use it to spill innocent blood in order to seal her dark transformation. In Times Square, the New Mutants succeed in rescuing the mutant infants and disrupting the pentagram. 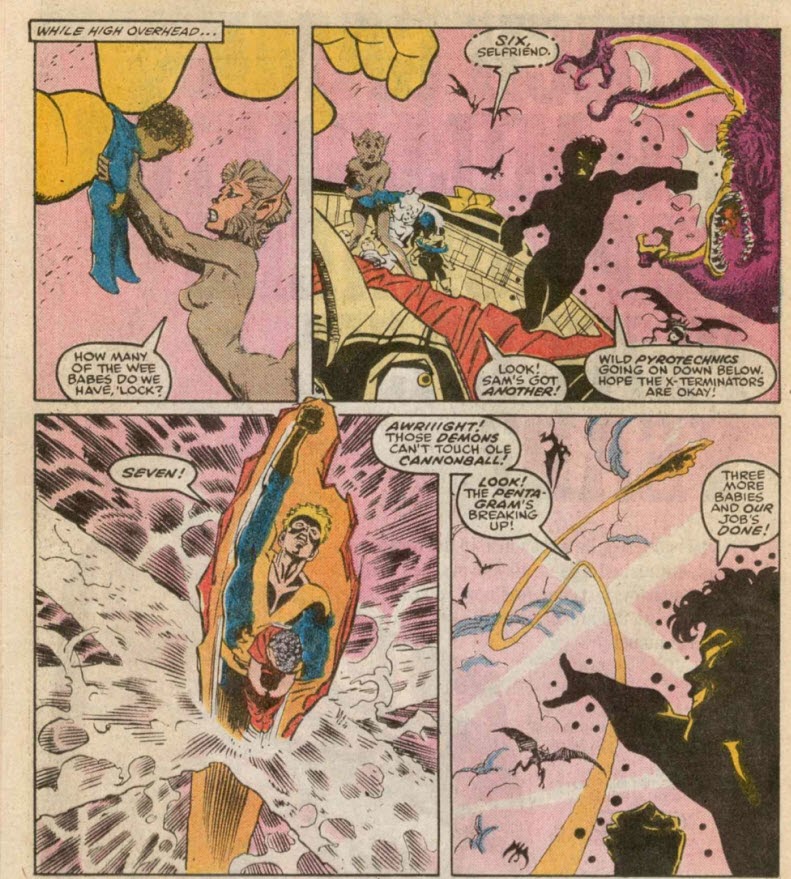 Feeling his power lessen, N'astirh allows himself to be infected with the Transmode virus by S'ym, triggering a massive explosion. But with the portal closed, the rain of demons has ended, and the New Mutants regroup with the X-Terminators at a nearby church. Leaving an injured Dani with Rusty and Skids to guard the rescued babies, the rest of the New Mutants, joined by Boom-Boom and Rictor, set off to find Illyana. Just then, Illyana, now in a transformed beauty parlor, attacks a demonic chair with her Soul Sword, drawing blood. N'astirh appears, pleased that she's decided to join him, but she rejects him once more, realizing he's been pushing her down this dark path. Manifesting a new set of armor, she attacks the demon with her sword, but he teleports away, saying she has at last accepted her power. Alone, overwhelmed by her dark side, Illyana collapses. She calls out for somebody to help her, just as a smiling S'ym silently appears before her.

Firsts and Other Notables
This issue begins the integration of the X-Terminators into the series, as, in the wake of their separate efforts to disrupt the pentagram, the two groups come together, with the weaker/wounded members of each team staying behind at a church to recoup and protect the rescued infants while the rest go off to find and help Illyana. Notably, Rictor and Boom-Boom leave with the New Mutants' contingent, as the two of them, moreso than Rusty and Skids, will become mainstays of the New Mutants and, later, X-Force. 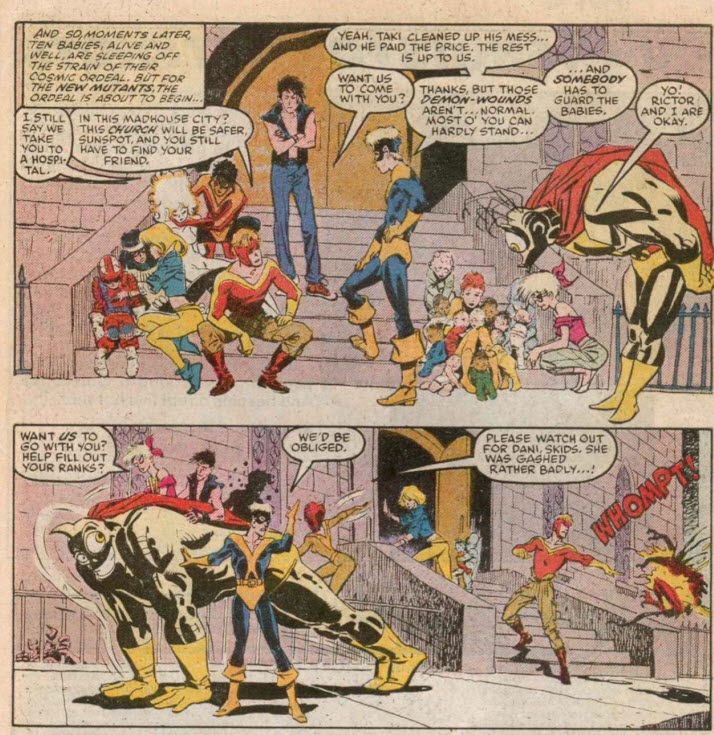 The future Cannonball/Boom-Boom romance gets its start in this issue, as Boom-Boom calls Sam "Tall, Blonde and Handsome" (and also uses the somewhat-troubling nickname of "Muties" for the New Mutants). 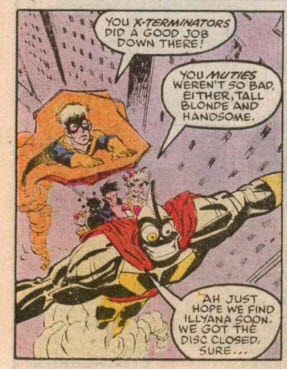 The opening pages of this issue feature some really odd narration about Illyana, and I have no idea what to make of it: "She had always been beautiful, like a perfect, pastel present, just begging to be opened. But she liked it, anyway, when her looks took people's breath away." Like, I get that Weezie is trying to underscore the idea that her physical appearance now mirrors her darkened soul, but that just seems unintentionally skeevy.

The Chronology Corner
Much of this issue runs in parallel to X-Terminators #4, showing the events of that issue from the perspective of the New Mutants. The New Mutants' appearance in Avengers #299 also appears between pages of this issue.

A Work in Progress
The demons delight in Illyana's demonic form, entreating her to rule them. 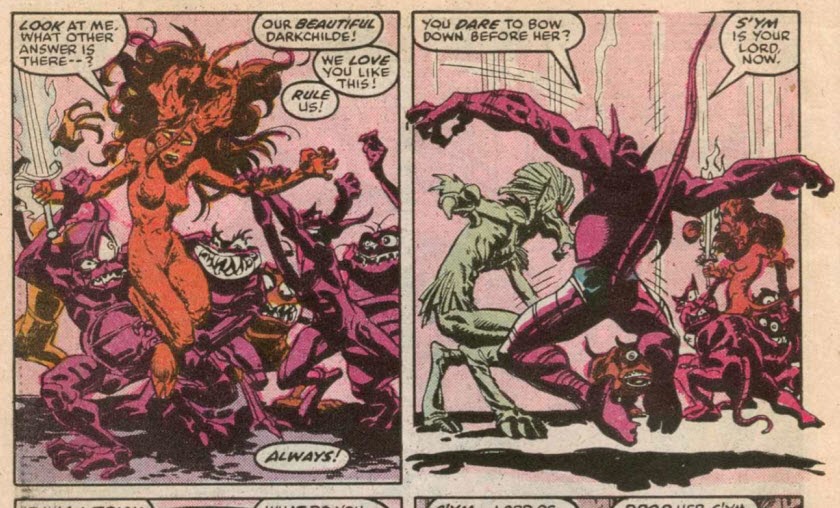 The your fault/our fault exchange between the New Mutants and X-Terminators from X-Terminators #4 is repeated, though curiously (given that Weezie wrote both issues), in this issue, it's Boom-Boom who says the line, whereas previously it was Rictor. 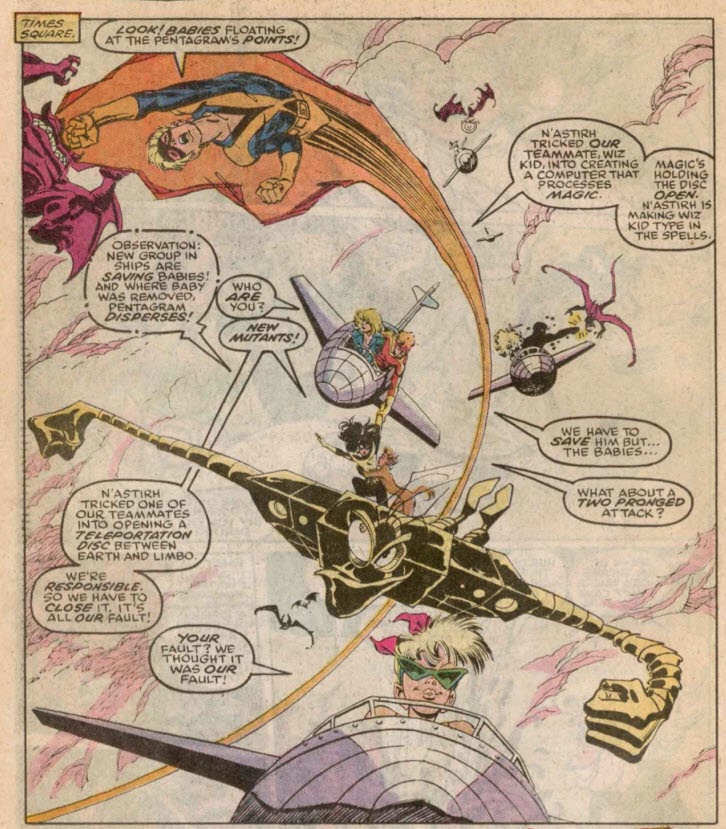 Dani is injured by a demon in this issue, a wound that takes her out of the climax of "Inferno". She is also said to be distracted by all the visions of death triggered by the Inferno. 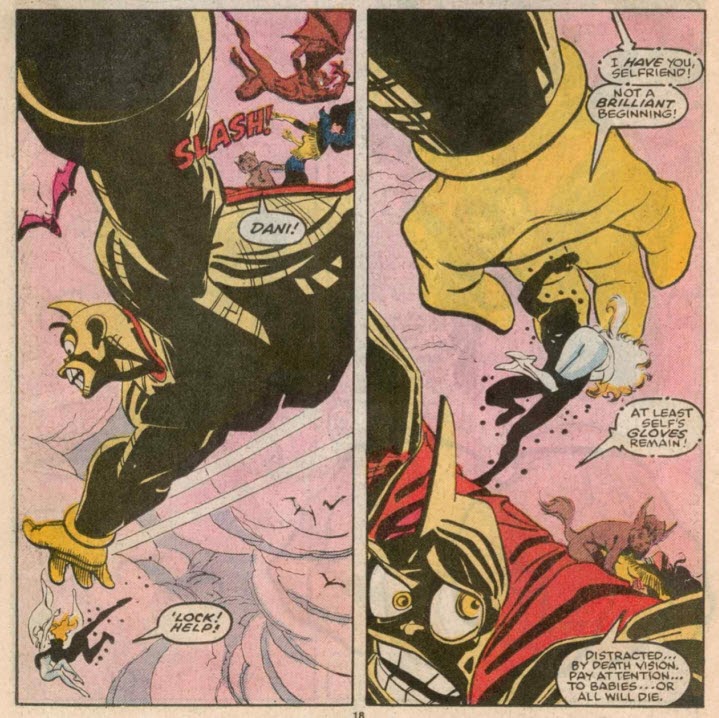 Rusty continues to wear the head condom bandage created for him by Dani in X-Terminators #4, despite the fact that she manifests other objects in the course of the story.

In the wake of his techno-organic transformation, N'astirh says each of his cells are programmed for magic. 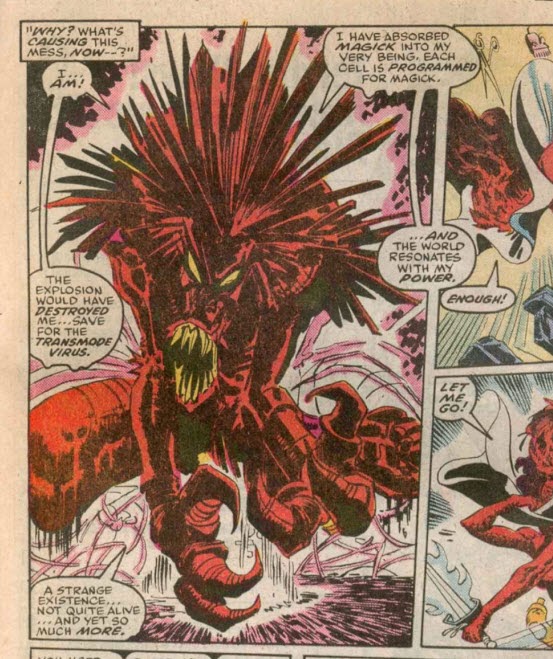 At the end of the issue, Illyana manifests new armor that covers her entire form (it is not quite the same thing as the Colossus-like armor that would previously manifest whenever she was injured). 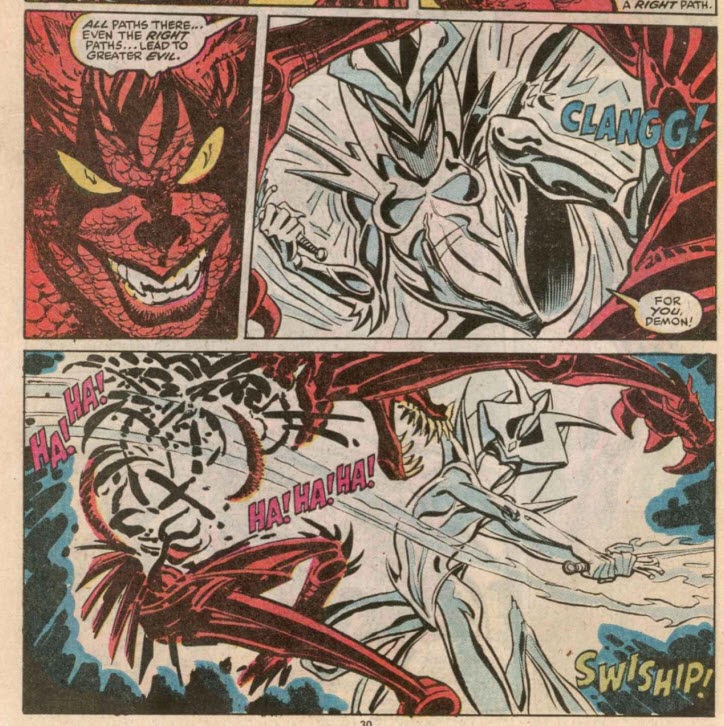 ClaremontismsWe are, of course, reminded that Sam is invulnerable while blasting. 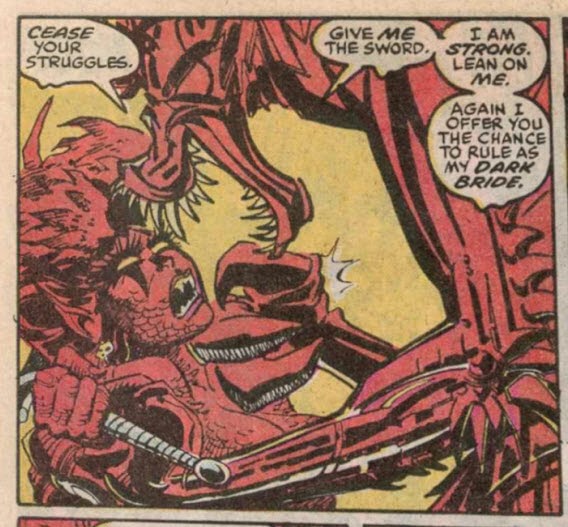 Teebore's Take
Much as with Uncanny X-Men #241, this issue splits its time between an introspective journey starring the character most affected by the events of "Inferno" (there, Madelyne Pryor; here, Illyana) and a melee featuring the rest of the team. Much of that portion of this issue is dedicated to showing the New Mutants' efforts to close the Earth/Limbo portal, the flip side of X-Terminators #4, with their story picking up where that one left off as an integrated New Mutants/X-Terminators flies off to find Illyana.

Illyana, meanwhile, spends most of the issue being tempted by various demonically possessed people and objects to give in to her dark side (represented in this case by attacking them with her Soul Sword), all part of N'astirh's plan to turn her fully to his side. The struggle itself is fairly routine material for Illyana at this point, though it does give Blevins an opportunity to draw some truly macabre material, and his more cartoony style gives the issue the same kind of effective juxtaposition between the creepy and the goofy that characterized Bogdanove's X-Terminators work (further tying the two series together). And there's no denying the sight of Illyana, overwhelmed by the struggle for her soul and utterly alone save for the looming presence of her original tormentor, is a heartbreaking one, and an ominous note on which to take us into the final chapter of her story.