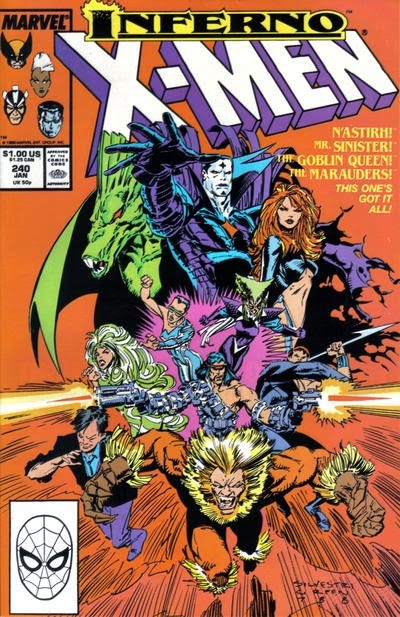 In a Nutshell
The X-Men locate and attack the Marauders.

Plot
At the Rainbow Room in New York, Alex and Madelyne spend a romantic evening together, even while the city continues acting strangely. As the evening ends, they return to Australia, after which Madelyne immediately leaves for Bard College. Now in her Goblin Queen attire, she visits Jean Grey's grave, admonishing the woman for returning to life and ruining Madelyne's life, then transforms Jean's parents into demons. Just then N'astirh arrives, promising her a lead in the search for her son. Back in Australia, Dazzler and Rogue fight over Rogue spending time with Longshot, while Alex informs Wolverine and Storm that the computer system has finally located the Marauders, moving into the Morlock Alley. 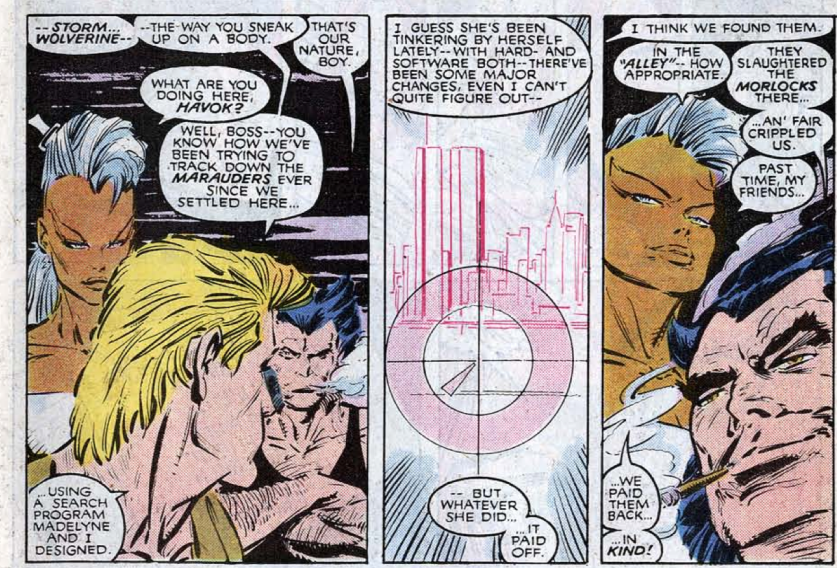 Meanwhile, Madelyne and N'astirh arrive at Mr. Sinister's base beneath the Nebraska orphanage, and Madelyne sees visions of both her son and herself in one of the empty pods that fill the complex. In the Alley, the Marauders are suddenly attacked by the X-Men. Surprised to see their old foes alive, the Marauders are overwhelmed by the savagery of the X-Men. Polaris takes control of Colossus' metal form and uses him as a battering ram to the surface, allowing the Marauders room to escape, but when both teams emerge, they're shocked at the condition of the city. Back in Nebraska, Madelyne demands that N'astirh tell her what the place is and why he brought her there. Just then, Mr. Sinister appears, and N'astirh says he can answer her questions better. Introducing himself to Madelyne, Mr. Sinister tells her she may call him father.

Firsts and Other Notables
The Marauders return this issue, and are seen moving into the abandoned Morlock tunnels. Several of their deceased members, including Blockbuster, Riptide and Prism (all of whom were killed in the course of "Mutant Massacre") are alive and well, and dialogue hints at the idea that the Marauders are clones who are merely replaced when one of them dies.

N'astirh brings Madelyne to the secret room beneath Mr. Sinister's orphanage, and she recognizes the equipment there, recalling its similarity to the equipment in Genosha, setting up next issue's revelation that she was a clone created by Mr. Sinister. 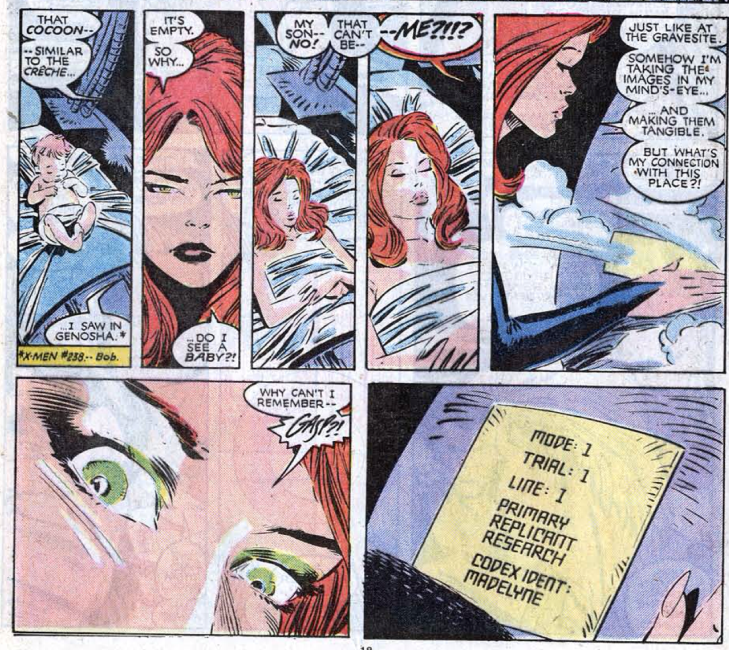 As the issue ends, Madelyne and Mr. Sinister come face-to-face for the first time. 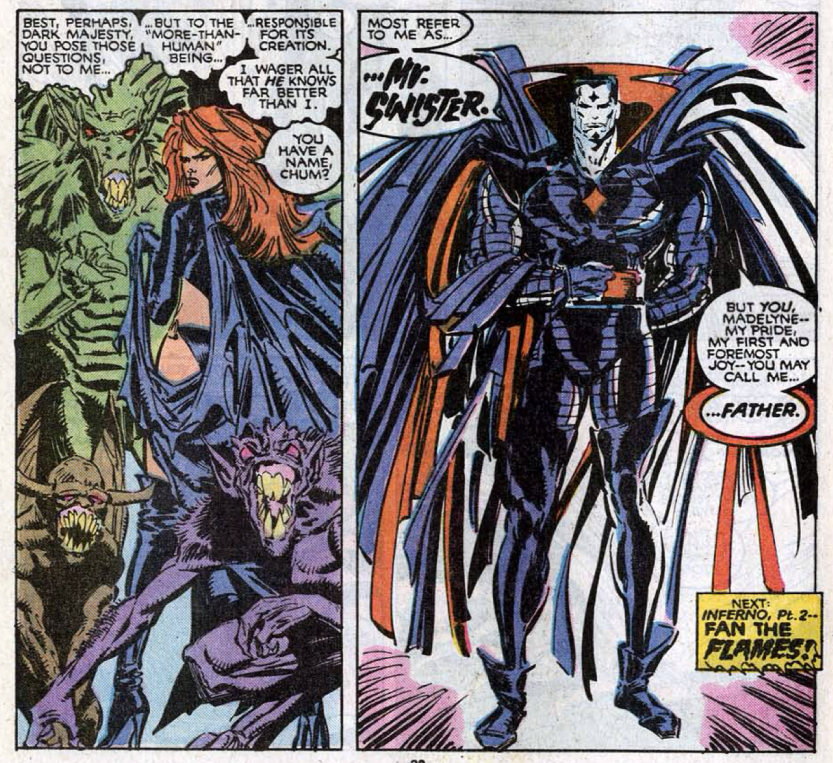 This issue is the first appearance of M-Squad, a Ghostbusters-inspired group of scientists. This issue, they are investigating the strange disturbances at the Empire State Building and are seemingly killed by the RCA building, but they'll emerge in a later issue, having started to hunt mutants. They're largely a footnote in the Marvel Universe, mostly remembered as being the villains in Jubilee's upcoming first appearance.

Madelyne transforms Jean Grey's parents into demons this issue; they will remain as such and enslaved to Madelyne, for the duration of "Inferno". 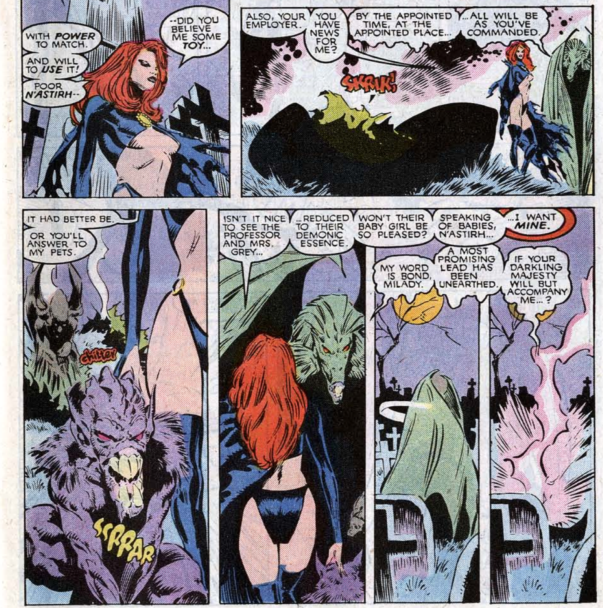 The cover of this issue and the next two all share a similar layout.

The Chronology Corner
N'astirh appears here between pages of X-Terminators #3.

A Work in Progress
The Empire State Building continues to grow and act strange, while during her date with Havok, Madelyne's dress changes from panel to panel. 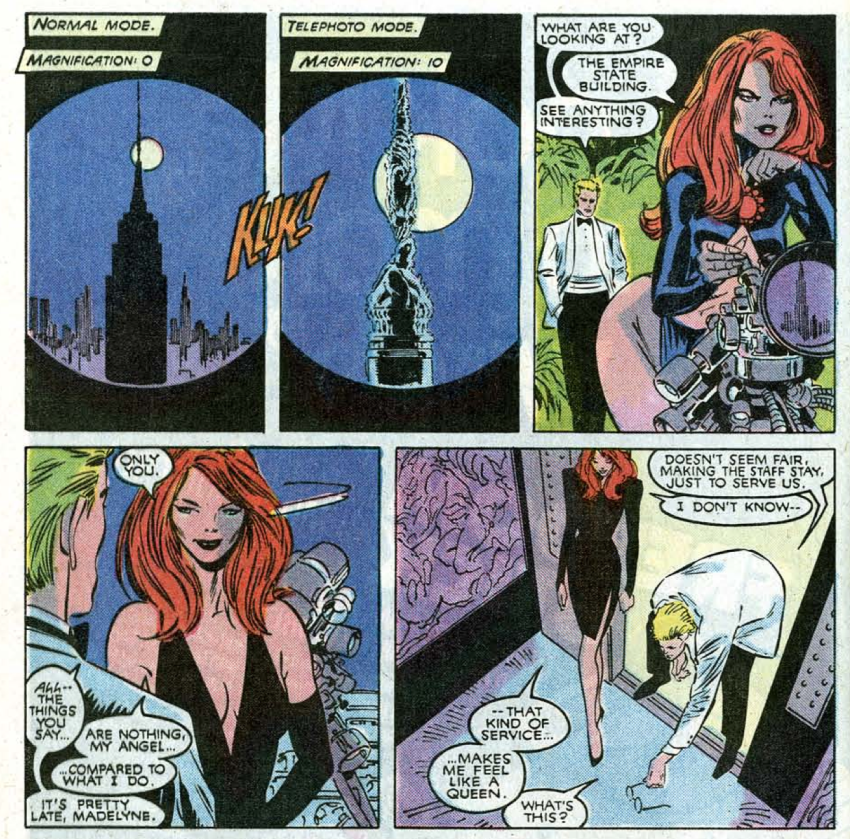 Havok wonders how Gateway knows when the X-Men want to be teleported home, and muses that it must be some function of his power. 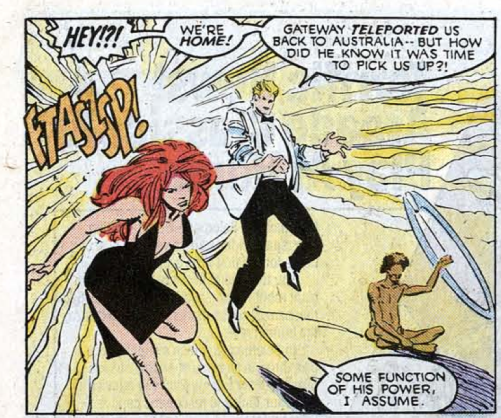 As Rogue and Dazzler fight over him, Longshot realizes they acting as though he's some kind of slave. 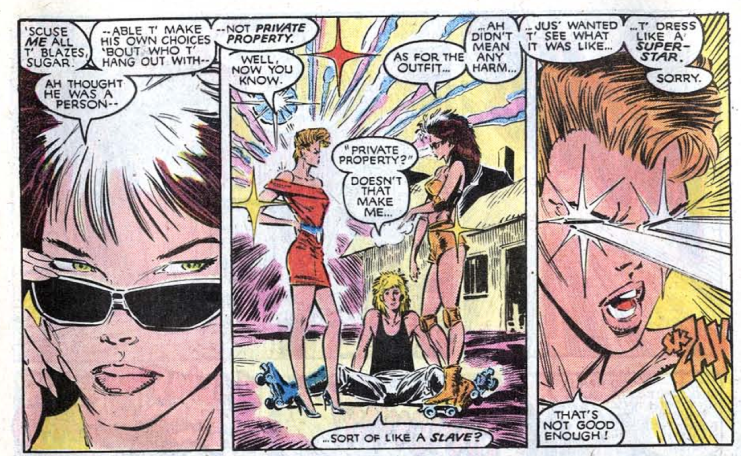 Havok notes he's become almost as good with the Reavers' computers as Madelyne, and the X-Men locate the Marauders when a computer program he and Madelyne created and as been running in the background finally finds them. 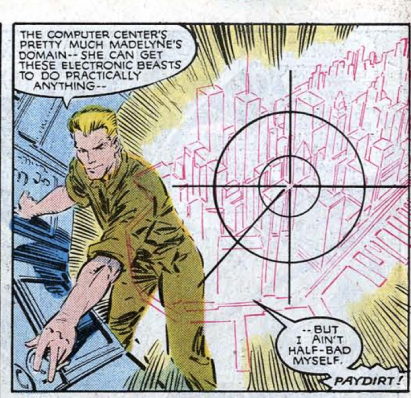 When N'astirh takes Madelyne to the secret facility beneath the orphanage in Nebraska, her son is notably not there, as we saw him carried off by demons in X-Factor #35.

As the X-Men attack the Marauders, Havok continues to grapple with the morality of killing his foes, and is unable to attack the Malice-possessed Polaris. 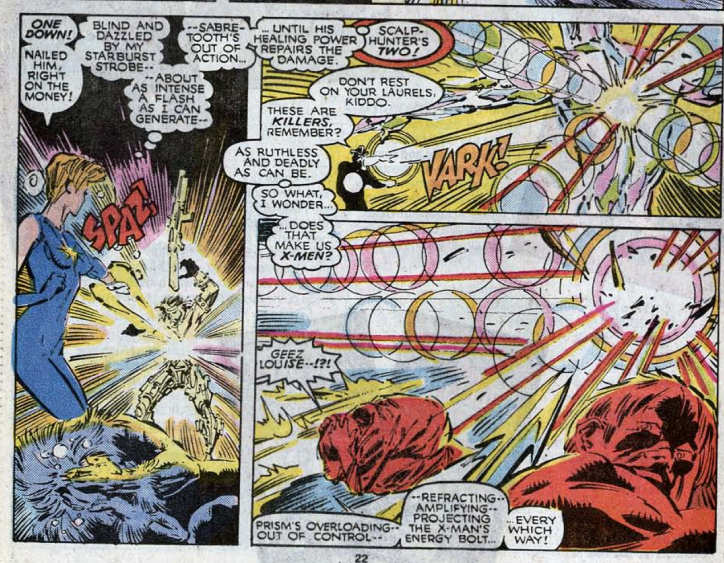 I Love the 80s
Rogue is wearing...some kind of outfit as she roller skates with Longshot. It's said to be Dazzler's, so there's apparently a lot of blame to go around for that particular fashion abomination. 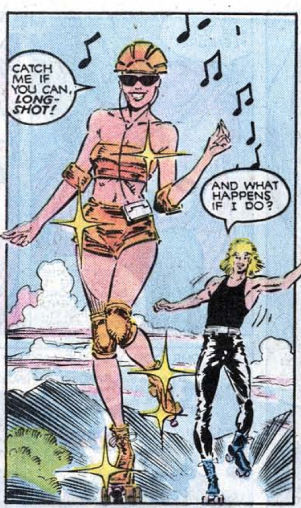 Claremontisms
Someone on both the X-Men and the Marauders uses the phrase "a body" to refer to themselves.

Psylocke refers to Polaris using the "totality of her strength".

Artistic Achievements
The sexualization element continues, as Colossus is shown painting Psylocke in the near-nude. 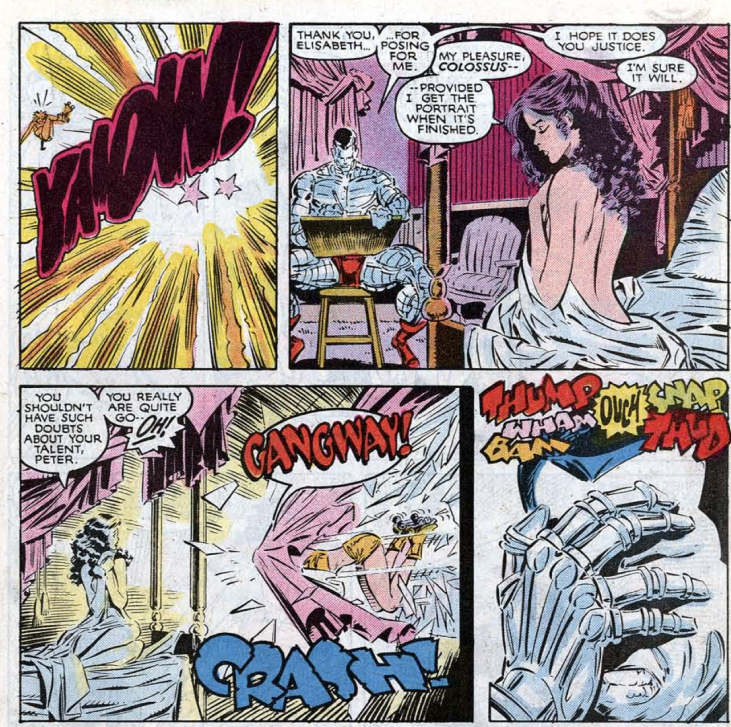 Young Love
Madelyne visits Jean Grey's "grave", and recalls her wedding to Scott. She's not wrong to call him a liar and get mad at him, either. 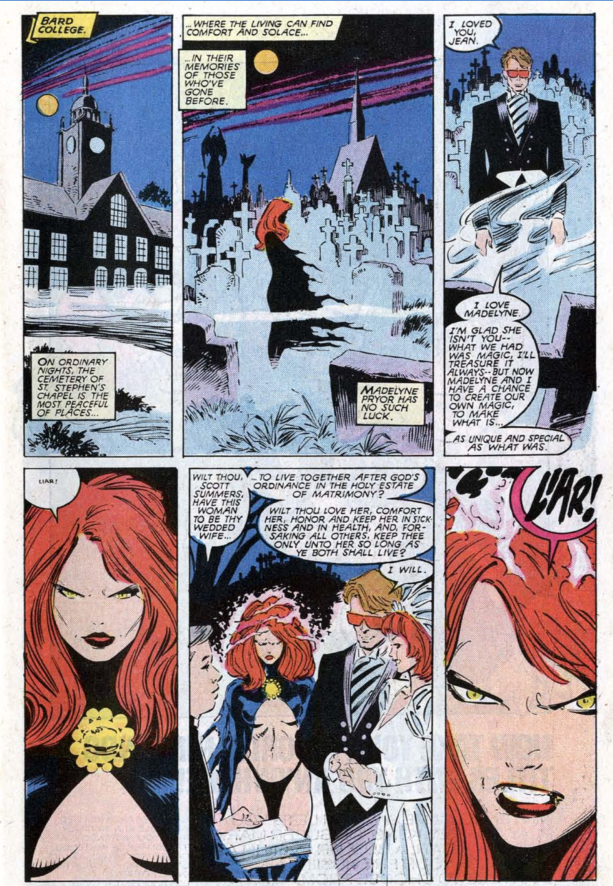 Longshot is angry at how possessive Dazzler is of him, and rightly notes that she doesn't control who he spends time with. 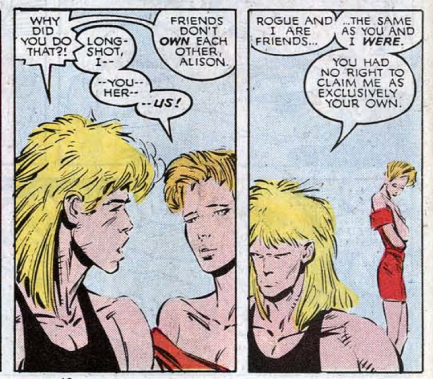 For Sale
This issue features an ad for some kind of proto-Game Boy portable Nintendo. 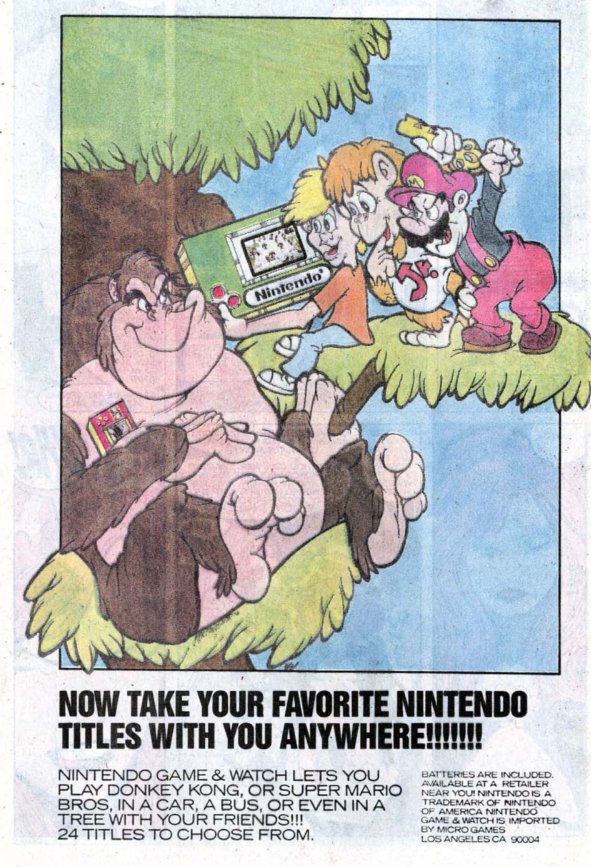 There's also an ad for the upcoming "Marvel Action Universe" block of cartoons, featuring Spider-Man and His Amazing Friends, Dino Riders, and, of all things, a Robocop cartoon. This lineup was my Saturday morning jam - I vividly remember this block of shows, it was during this grouping that I was first introduced to the X-Men via "Pryde of the X-Men", and my dinosaur-loving self ate up Dino Riders. I even got into Robocop, which made for an funny conversation when I asked my parents to see the movie. 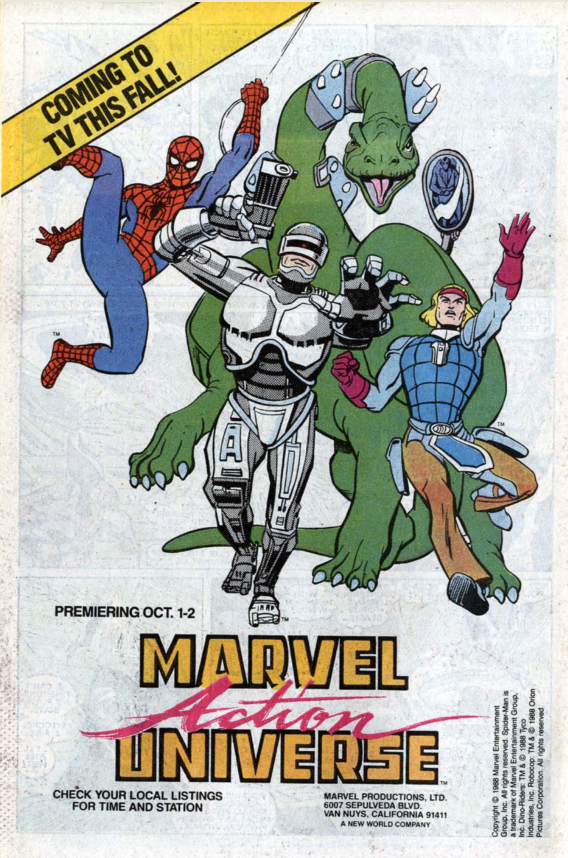 Finally, the back of the comic features a Mad-style fold-in ad for Yummy Mummy, the newest monster-themed breakfast cereal. It was, I believe, fairly short-lived (I never saw it back in the day), but was recently revived as part of a Target Halloween promotion and was actually pretty good. No Boo Berry, but pretty good. 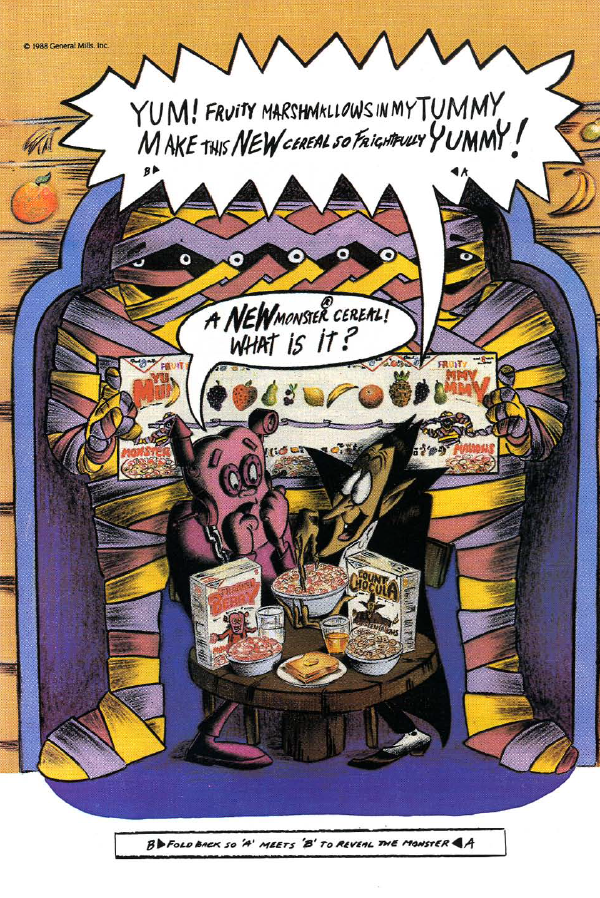 It's in the Mail
In this issue's letter column, a letter writer offers up an explanation for how Wolverine's Brood egg could transform his body despite his skeleton in isue #234 (basically, it was a super egg created by the Queen designed to work around his skeleton, but was still ultimately defeated by his healing factor).

Teebore's Take
A good half of this issue deals with more "Inferno" setup, as Madelyne continues her seduction of Havok, then the her hunt for her son and ends up face to face with Mr. Sinister, but while the story is subtitled "Part the First", this issue always stands out in my memory less for the "Inferno" elements than for the X-Men/Marauders rematch (it will also continue into next issue, but by then, the "Inferno" elements feel more "center stage"). Surprisingly, given how large a shadow they've cast over the title for the last two years, this is only the third full appearance by the Marauders, and the beginning of Claremont's final story featuring them.

After being soundly defeated by them in their first encounter and then fighting to a draw in their second, there's no denying the visceral thrill in seeing the X-Men beat the Marauders at their own game: savagely attacking them while the Marauders, unsuspecting, are in the Morlock Tunnels, the setting of their own unsuspecting and savage attack. That said savagery on the part of the X-Men passes mostly without commented from anyone besides Havok (who, since the Brood arc, has functioned as the X-Men's conscience) is likely intentional commentary on Claremont's part: these are the darker, edgier X-Men, but in order to defeat the Marauders, they've had to become them.

Next Issue
Tomorrow, the New Mutants battle S'ym in New Mutants #71, and Friday, X-Factor hunts for Christopher in X-Factor #36. Next week, we look at the first batch of "Inferno" tie-in issues.
Newer Post Older Post Home
Posted by Austin Gorton at 12:00 PM