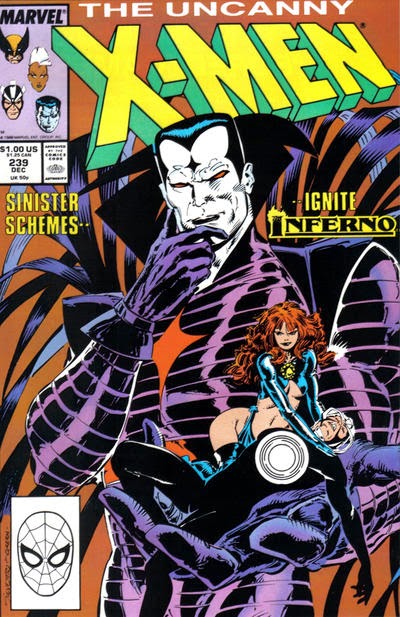 In a Nutshell
Mr. Sinister muses on the X-Men as Madelyne works to find her son.

Plot
In New York, with the heat wave continuing, a demonically-possessed Empire State Building eats a family of tourists. Another day in a another place, Mr. Sinister reflects on the believed-dead X-Men. He is interrupted by Malice, who is angry after discovering she is unable to break her bond with Polaris' body. Mr. Sinister admits he hoped that would be the case, saying he only intends to make her stronger. In Australia, Dazzler performs at a local saloon as Longshot watches. Storm, searching the computers for information on the Reavers, discovers footage of an X-Factor press conference, and realizes Jean Grey is alive. She angrily confronts Wolverine about it, and he admits he suspected as much, but was scared to find out for sure. In the caves beneath the town, Psylocke, Rogue and Colossus train, and Carol Danvers once more takes control of Rogue's body after a particularly nasty psychic attack from Psylocke. 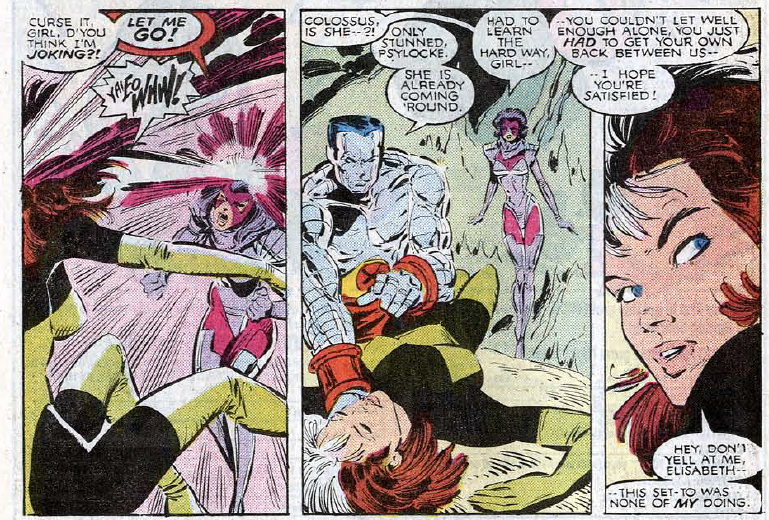 Above, Alex is sunbathing when Madelyne approaches him. The pair discuss their growing feelings for one another, with Madelyne waving aside Alex's objections, and the two retreat to a room together. Elsewhere, Mr. Sinister watches Madelyne's son, who is in a suspended animation pod, saying the boy will ensure his long-term victory. Unbeknownst to him, Mr. Sinister is in turn being watched by N'astirh, who contacts Madelyne. Calling her the Goblin Queen, he tells her the first sparks of the upcoming inferno have begun manifesting, but she insists he hold up his end of their bargain: she wants the Marauders found, so the X-Men can pay them back, but most of all, she wants her son.

Firsts and Other Notables
After his brief first appearance in issue #221, Mr. Sinister returns, and we learn a little bit more about his motivations (removing the evolutionary dead-ends so that the strong can thrive, not too different from Apocalypse's creed, which is retroactively fitting given the eventual relationship established between the two). We also see more of his headquarters, which looks somewhat different than the Marauders lair we saw in #221 and will shortly be revealed as being beneath the orphanage where Cyclops grew up. 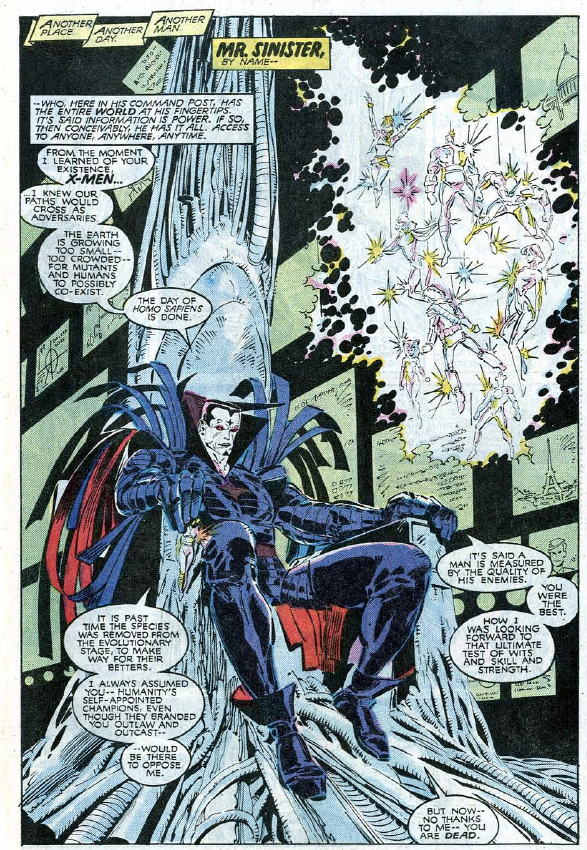 Thirty-eight issues after his birth (not counting all the parallel issues of X-Factor), Cyclops' infant son finally gets a name: Nathan Christopher Charles Summers. It's also revealed that he's been in the possession of Mr. Sinister all this time, which makes sense (given that he sent the Marauders after Madelyne, as seen in issue #215, presumably having them take the baby at that time as well). 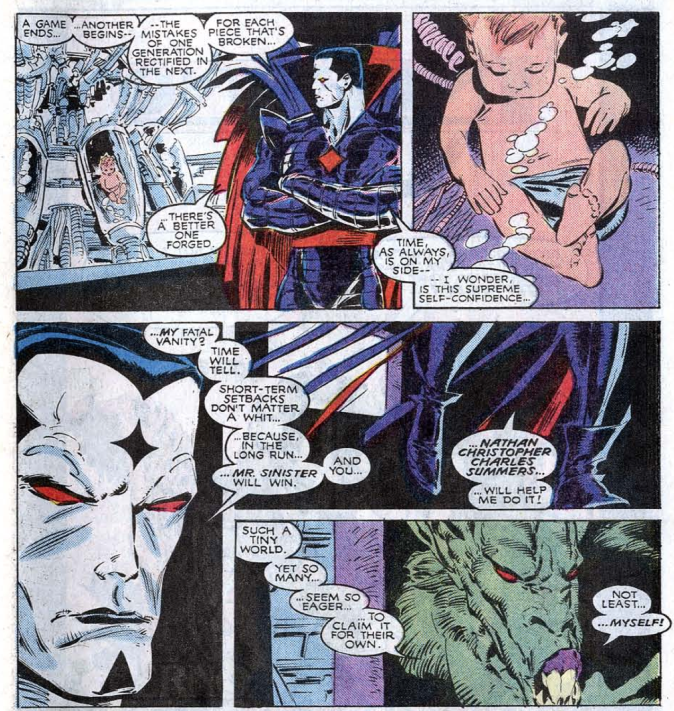 We learn that Malice has become permanently bonded to Polaris, and Mr. Sinister states that while she can continue to possess others, she now has a body to return to, something which was part of his plan all along (though nothing really ever comes of all this). 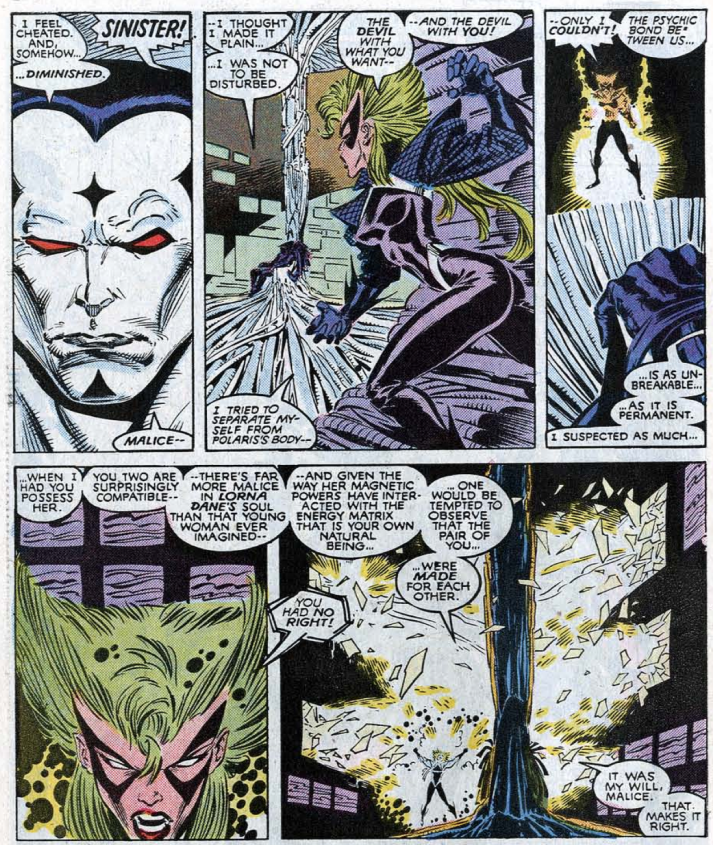 He also notes that Malice is unique amongst the Marauders; the next few issues will tease the idea that the Marauders are or have been cloned by Mr. Sinister (something that later stories will confirm to be true), and this comment may suggest that Malice is the one original, non-cloned Marauder on the team.

Storm learns that Jean Grey is alive this issue, after the Reavers' computers pull an image of an X-Factor press conference and she confronts Wolverine, who verifies it. 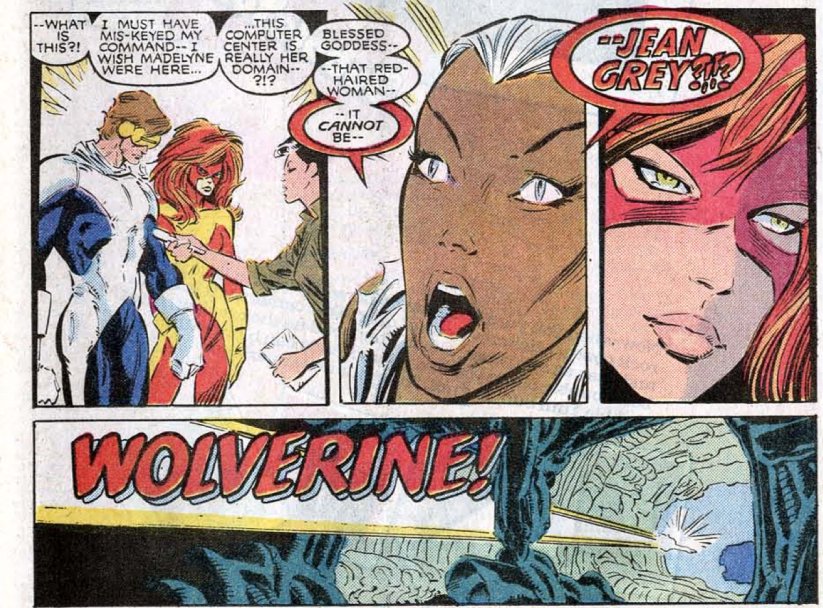 A Work in Progress
With the city still gripped by a heat wave and more and more inanimate objects acting of their own accord, we see the Empire State Building eat a family of tourists this issue. 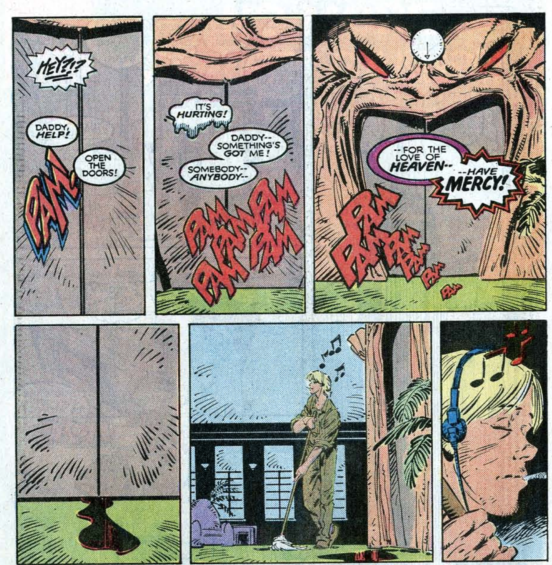 Storm notes that the Reavers' computers curiously contain a lot of info on the X-Men, and wonders where they came from, but nothing really comes from her line of thought. 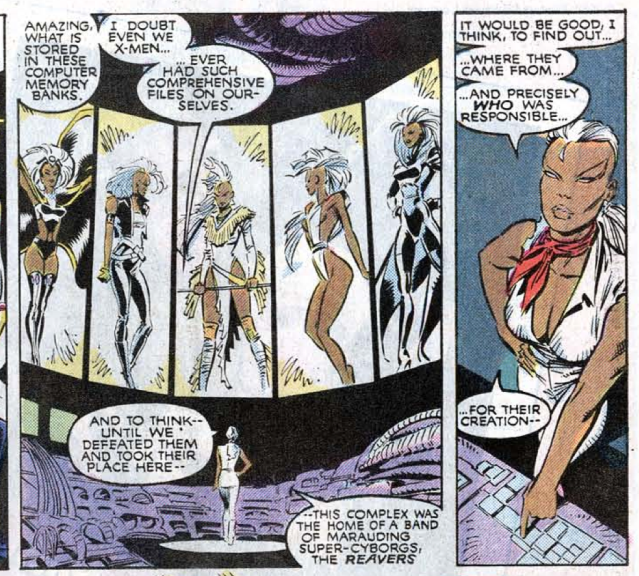 It's confirmed that smelling Jean's scent within the burnt remains of her sister's firebombed house in issue #215 is what triggered Wolverine's berserker rage, causing him to knock out Storm in that issue.
He also notes that Jean's scent now carries no hint of Phoenix, thought I'm not quite sure how that works. There's no space smell on it? 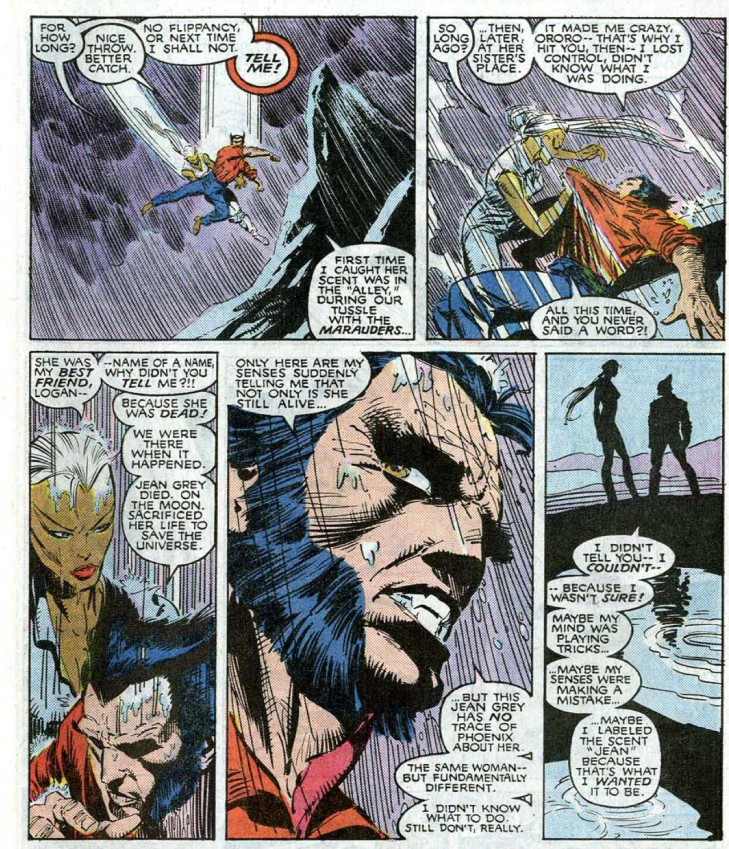 Between last issue and this one, Rogue has regained control of her body, but Carol takes control again after Psylocke lashes out at Rogue during training. The art also suggests that when Carol is in control, she can touch people without absorbing their powers and abilities, something which furthers the idea that Rogue's inability to do so is mental, and not a physical restriction of her power.

Claremontisms
In something that is not at all bad, the narrative captions describing Dazzler's singing strike me as something very specific to Claremont. 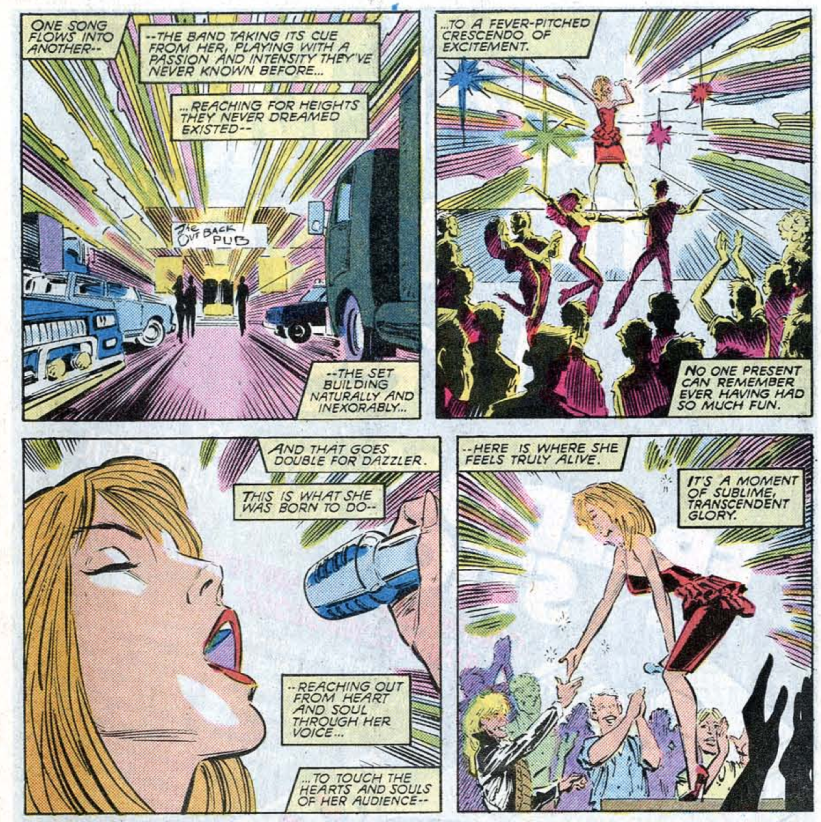 Artistic Achievements
For me, this has always felt like the issue where Silvestri really cranks up the sexiness in his art. From the splash page of Dazzler kicking in the doors of the saloon to Psylocke peeling off her armor and going for a swim to Madelyne spending most of the issue slinking around in one form-fitting dress after another (and, for the ladies/gay men, Alex sunning himself in a speedo), "Inferno" isn't the only thing cranking up the heat!

Like a Phoenix, From the Ashes
When Madelyne first appears before Havok in this issue, she emerges from the other side of Dazzler's lights, creating a fiery effect as she does so, then jokes about being a mind-reader. 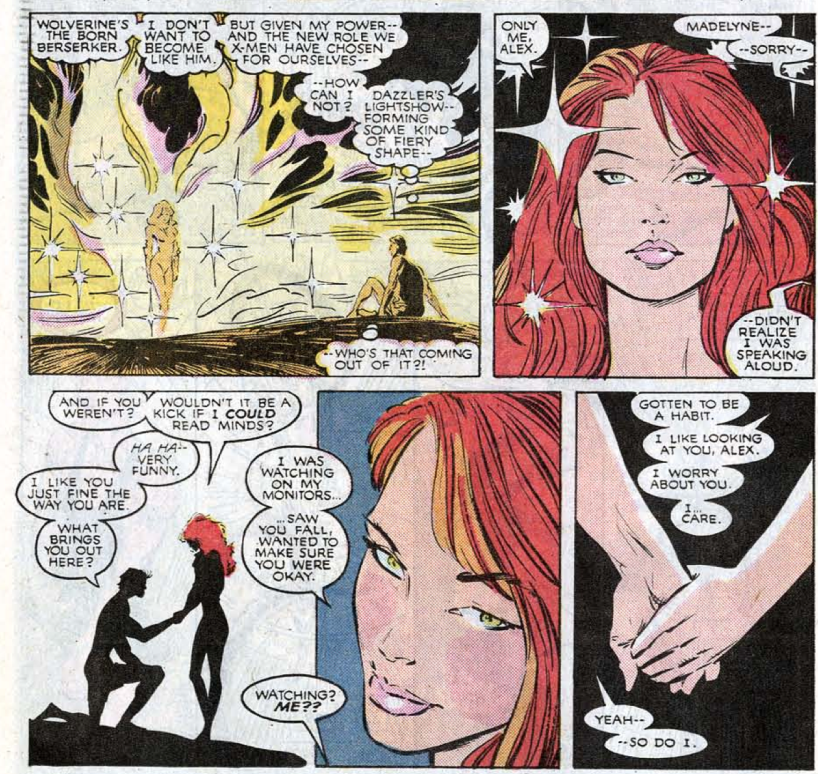 As the issue closes, Madelyne communicates with N'astirh while wearing a similar dress to the one Phoenix wore entering the Hellfire Club in issue #132. The issue closes on a close-up of her eye, containing the Phoenix firebird effect. 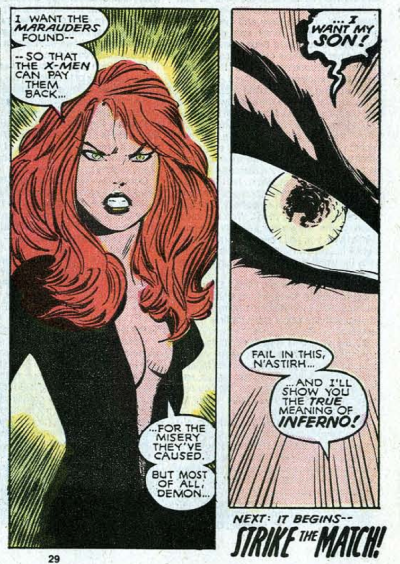 Young Love
Havok, at least, more or less considers Dazzler and Longshot a couple at this point (they're also riding the bike Dazzler received in issue #230). 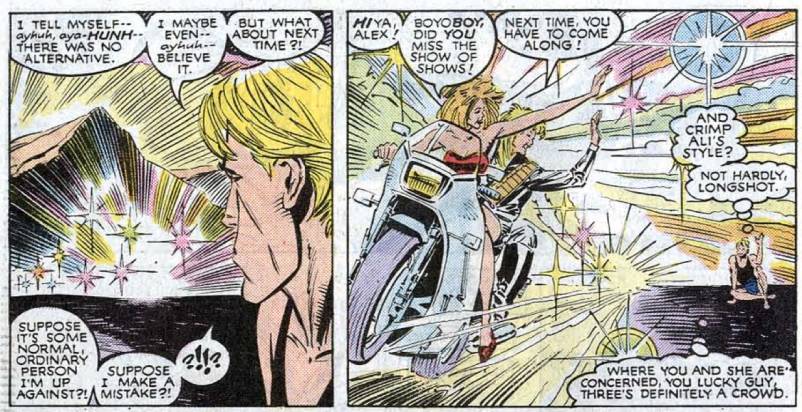 Later, Havok and Madelyne make the beast with two backs for the first time. Alex at least acknowledges the fact that Maddie is his brother's wife, but Madelyne (not entirely without merit) brushes that aside. 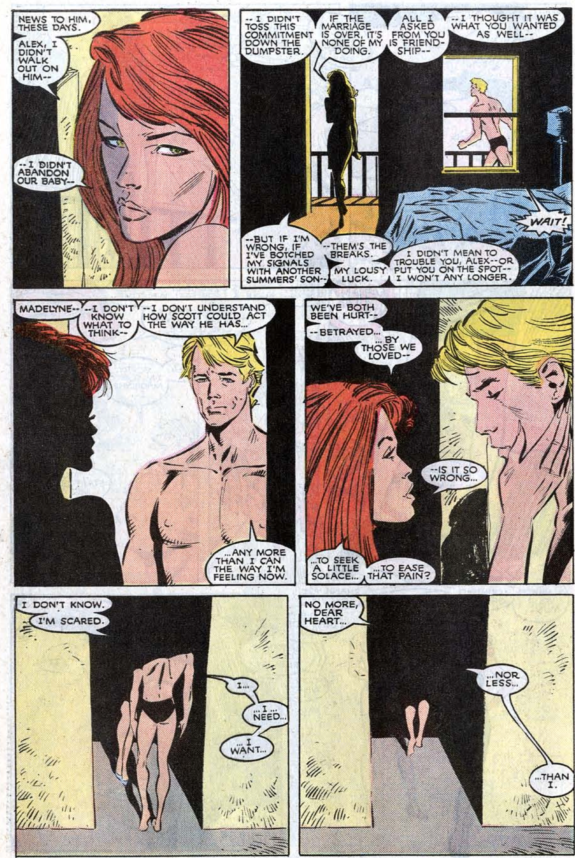 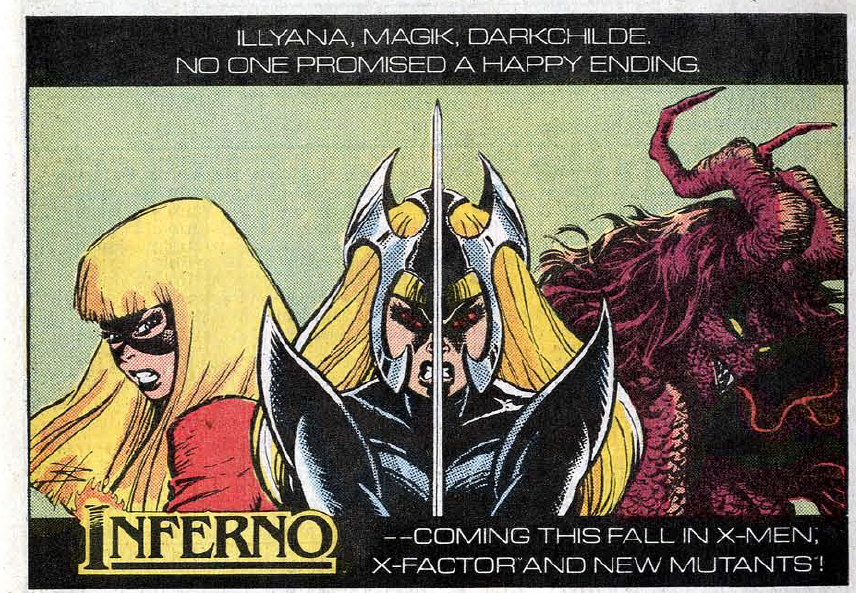 It's in the Mail
The letters page is back, running an extra half page (with the "Inferno" ad on the bottom of the second page), featuring letters commenting on the recent Brood story, with several of them complaining about all the dangling plot threads in the book at the moment (many of which, the responses rightly point out, that will be addressed in the course of "Inferno").

Teebore's Take
It's a Classic Claremont Quiet issue, this one bridging the gap between the Genosha arc and "Inferno", though it's much more concerned with the latter than the former. To that end, Claremont essentially reintroduces Mr. Sinister, using his musings on the believed-dead X-Men as a framing device to explore various character-based vignettes and further tease Madelyne's role in the upcoming crossover. For some readers (including myself) who came into comics at a time when Mr. Sinister was at the center or on the fringes of nearly every major story, it may seem odd that the character needs a reintroduction, but this is only the second time we've seen the character at this point, and the previous appearance was all of a handful of pages in the beginning of issue #221.

Given how significant the character becomes to the X-narrative as a whole, it's a little mind-boggling to be reminded of that, while at the same time, Claremont is wise to spend some time on him here, as the character will immediately become a central figure not only in "Inferno", but retroactively, in the resolution of one of the book's biggest (albeit unintentional) unresolved mysteries: where did Madelyne Pryor come from, and what is her relationship to Jean Grey?

Next Issue
Tomorrow, the Spyder story comes to a close in New Mutants #70, and Friday, Cyclops searches for his son in X-Factor #35. Next week, a special Tuesday edition of X-aminations looks at the X-Terminators miniseries.
Newer Post Older Post Home
Posted by Austin Gorton at 12:00 PM