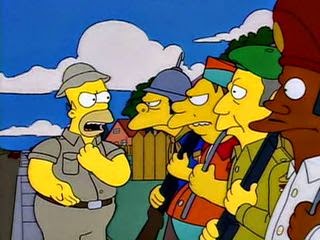 Or the One Where
Homer forms a vigilante group.

The Setup
After Lisa's saxophone is stolen as part of crime wave sweeping Springfield, Homer forms a gang of vigilantes to hunt down the culprit and retrieve the instrument.

Notable Notes
Sam Neill, riding high on the success of Jurassic Park at this point, guest stars as Malloy, the gentlemanly cat burglar.

This episode contributed arguably the most used bit of Simpsons dialogue to my personal lexicon, Homer's rejoinder of "I dunno, Coast Guard?", which has more or less replaced "I don't know" in my casual conversations.

In fact, I've absorbed an awful lot from this episode. Homer's lesson in statistics, digging up to get out of a hole (physically or otherwise), and that blowing into an empty bottle is a hoedown, which one should never, ever stop in the middle of.

Quotable Quotes
Lisa: We are insured, aren't we, Mom?
Marge: Homer, tell your child what you bought when I sent you to town to get some insurance.
Homer: Curse you, magic beans!
Marge: Oh, stop blaming the beans.

Kent Brockman: When cat burglaries start, can mass murders be far behind? This reporter isn't saying that the burglar is an inhuman monster like the Wolfman, but he very well could be. So, professor: would you say it's time for everyone to panic?
Professor: Yes I would, Kent.

Homer: You better have a good reason for doing that, boy.
Jimbo: It makes me feel like a big man.
Homer: Let me check my reason list. ...Yep!  It's on here.
Jimbo: Hey! You're that drunken posse. Wow...can I join ya?
Homer: I don't know...can you swing a sack of door knobs?
Jimbo: Can I!
Homer: You're in! Here's the sack.
Moe: But you gotta supply your own knobs.

Homer: So I said to him, "Look, buddy, your car was upside down when we got here. And as for your Grandma, she shouldn't have mouthed off like that!"
Lisa: Dad, don't you see you're abusing your power like all vigilantes? I mean, if you're the police, who will police the police?
Homer: I dunno. Coast Guard?

Kent: Mr. Simpson, how do you respond to the charges that petty vandalism such as graffiti is down eighty percent, while heavy sack-beatings are up a shocking nine hundred percent?
Homer: Aw, people can come up with statistics to prove anything, Kent. 14% percent of all people know that.
Kent: I see. Well, what do you say to the accusation that your group has been causing more crimes than it's been preventing?
Homer: Oh, Kent, I'd be lying if I said my men weren't committing crimes.
Kent: ... well, touche'. 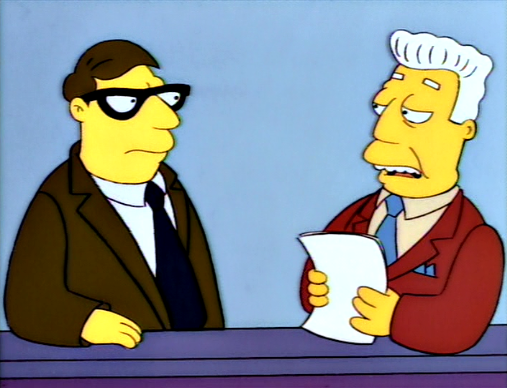 Teebore's Take
This is another all-time great episode, another in frequent consideration for my favorite of all time, and possibly the episode I've quoted the most outside of discussions of The Simpsons. It is, of course, hilarious, but it's also really well constructed: it takes a relatively mundane plot (Springfield is beset by a cat burglar), addresses the plot in a typically whacky Simpsonian manner (Homer responds to police ineptitude by taking the law into his own hands as the leader of a roving band of vigilantes), but (and this what too many latter day episodes forget) it takes the time to ground the whacky premise in character (Homer is motivated by his desire to retrieve Lisa's lost saxophone, her one creative outlet and source of joy, and later, Grampa is intent to prove that old people can be useful).

That the culprit turns out to be the new character we've never seen before who sounds a bit like the paleontologist from Jurassic Park is irrelevant; this episode is, as the title suggests, more about Homer's antics than it is about whodunit. And that the whole thing wraps up in, of all things, a It's A Mad, Mad, Mad, Mad World homage is just classic Simpsons.

Another uproariously funny all-time great that makes the most of an outlandish premise, and personally, one of the episodes that has most ingrained itself into my personal lexicon.