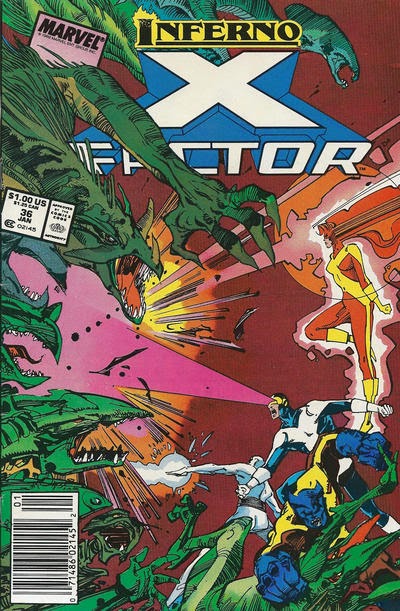 In a Nutshell
X-Factor battles the demonic Inferno in Manhattan.

Plot
Beast and Iceman are battling possessed objects in Manhattan, as Trish Tilby reports on the state of the city. During a break in the action, Trish and Beast talk, with Trish unsettled by Beast's recent transformation. Just then, she and her cameraman are eaten by a demonic subway. Elsewhere, N'astirh muses on his manipulation of Madelyne Pryor, then appears before Death, sensing the darkness within him and attempting to sway him to N'astirh's side. When Death learns N'astirh empowered Hodge, he vows to unleash his evil on the demon. Meanwhile, Cyclops and Marvel Girl, telepathically following the cries of Cyclops' son, arrive in Manhattan as Beast and Iceman manage to climb aboard the subway which ate Trish. Cyclops and Marvel Girl are attacked by a possessed jetliner, while Iceman and Beast manage to stop the subway when it tries to cross the Manhattan Bridge. 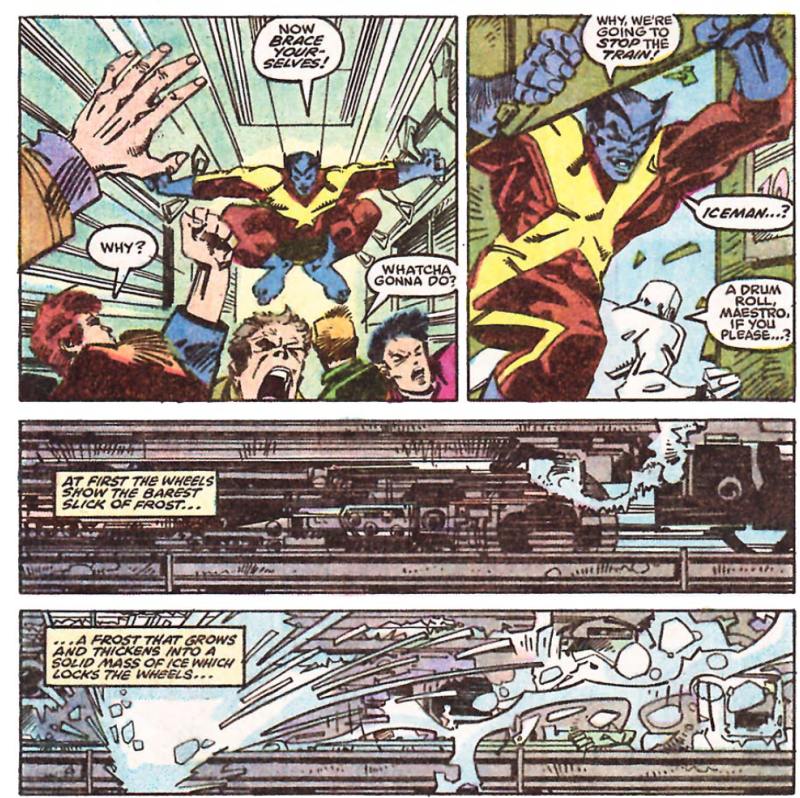 They help the passengers get free, and then Beast and Trish team up to electrocute the monster. Elsewhere, Cyclops and Marvel Girl, having lost contact with Christopher, eject from their plane as they see a massive pentagram appear in the sky above the city, followed by a portal from which thousands of demons spew. Seeing the portal themselves, Beast and Iceman head in its direction, but not before Trish kisses Hank, admitting he's not the guy she knew before, but is a guy she'd like to know better. Beset by demons and possessed objects, X-Factor reunites on the streets of the city, and are almost overwhelmed when Death arrives to turn the tide. Suddenly, Marvel Girl makes contact with Christopher again, and realizes that the demons are now prepared to eat him. Together, X-Factor rushes off to save him.

Firsts and Other Notables
Warren/Angel/Dark Angel/Death more or less rejoins the team this issue, having decided to target N'astirh and his demons for helping empower Hodge and thus bring about Candy's death. The name "Archangel" still hasn't been suggested as his new codename, so we'll go with "Dark Angel" until then, now that's he back on the team and no longer an estranged Horseman. 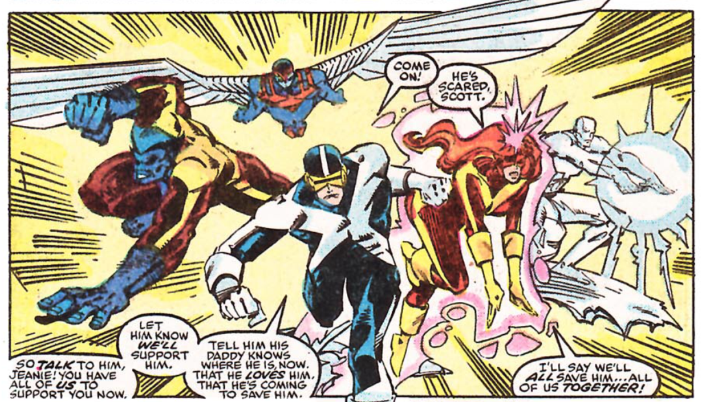 The Chronology Corner
Much of this issue run concurrently to X-Terminators #3, with N'astirh appearing here between pages of that issue. 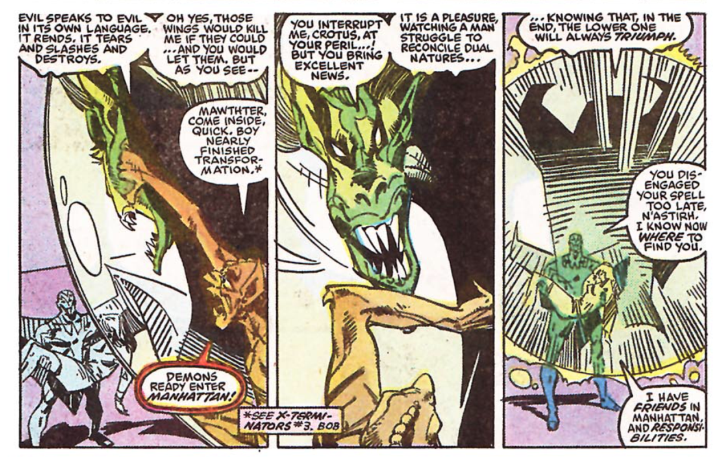 A Work in Progress
In a one-page monologue, N'astirh admits that he's using Maddy to further his own ends as much as she thinks she's using him. 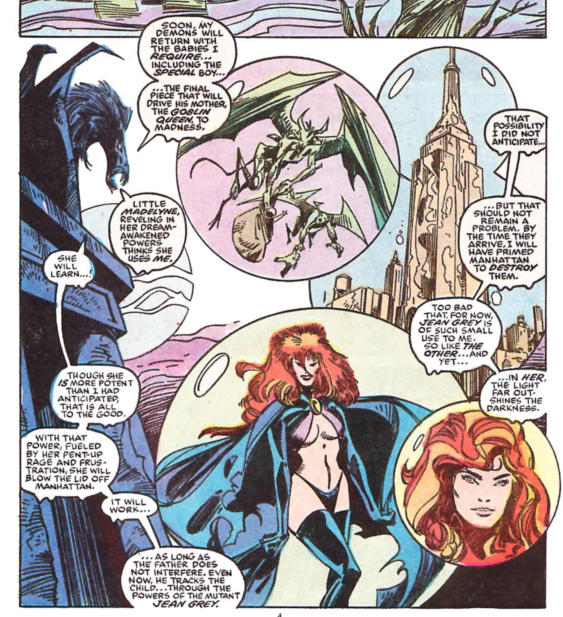 This issue confirms that Dark Angel did indeed cut of Hodge's head in issue #34, as we see both the body and the head not quite where it should be.

N'astirh notes that Death's wings seem to have a soul of their own. 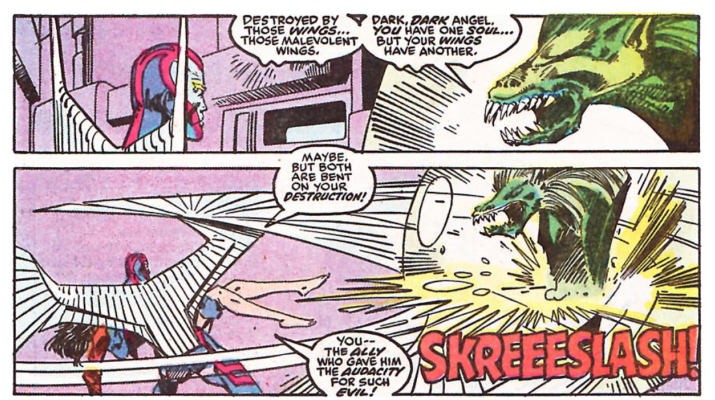 Somewhat comically, it appears that Cyclops and Marvel Girl are wearing safety helmets while flying their jet. Safety first! 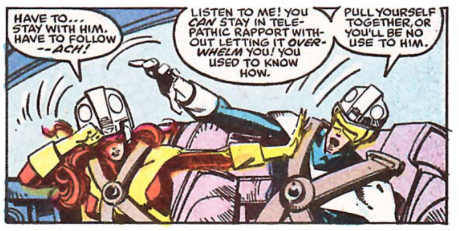 The Empire State Building's growth is noted once again. 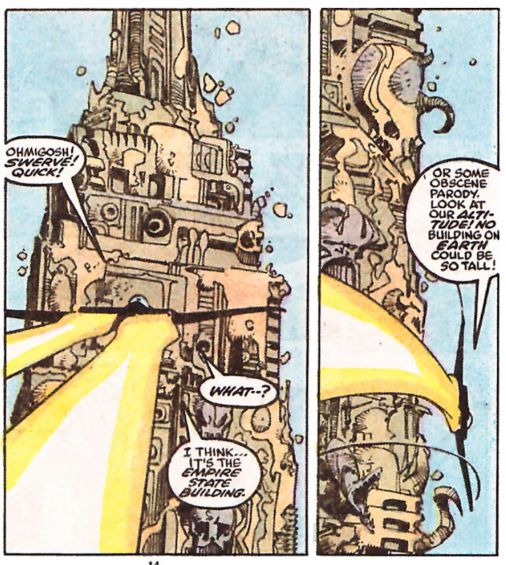 The pentagram made of babies created at the end of X-Terminators #3 is seen by the members of X-Factor, followed by the demon-spewing portal that appeared in X-Terminators #4. 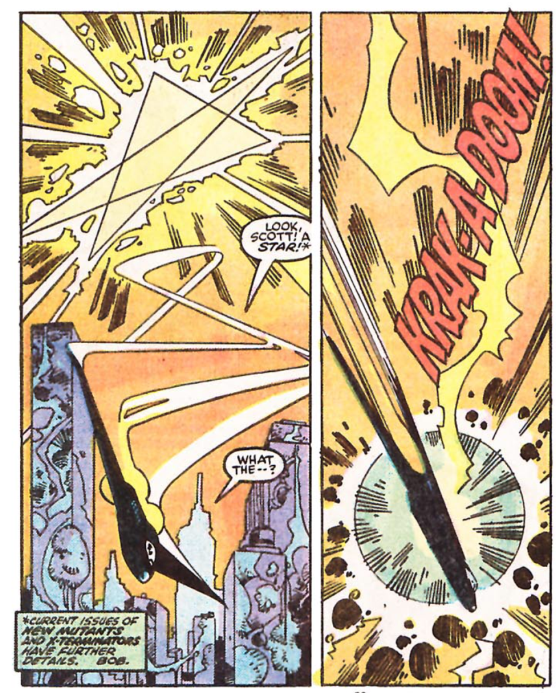 The Reference Section
On the opening splash page, a demonic hot dog cart tries to eat Calvin and Hobbes. 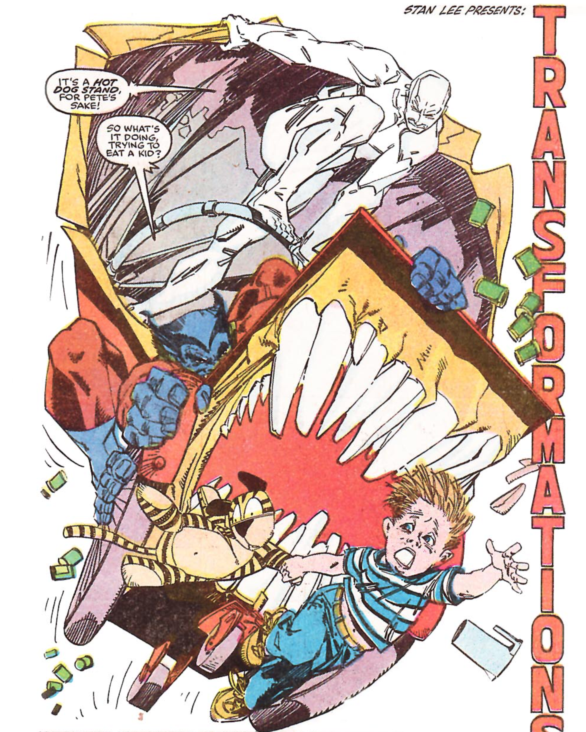 Young Love
Trish spends much of the issue coming to terms with Beast's new look, starting off unsettled by the transformation, not because of the blue fur, but because of how seemingly-different the brash, jocular Beast is to the more gentle, simplistic one she got to know. 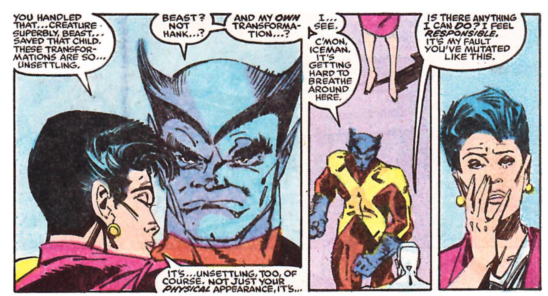 Specifically, she realizes it's Beast's constant chatter during battle that unnerves her, as it suggests he isn't taking the threat seriously. 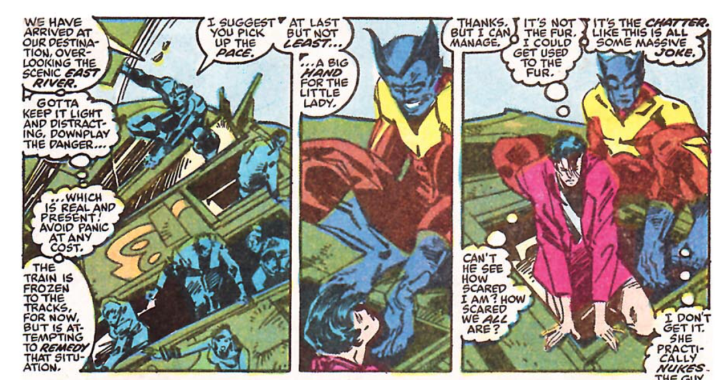 By the end of the issue, after helping him defeat the possessed train, Trish decides she'd like to get this version of Beast better. 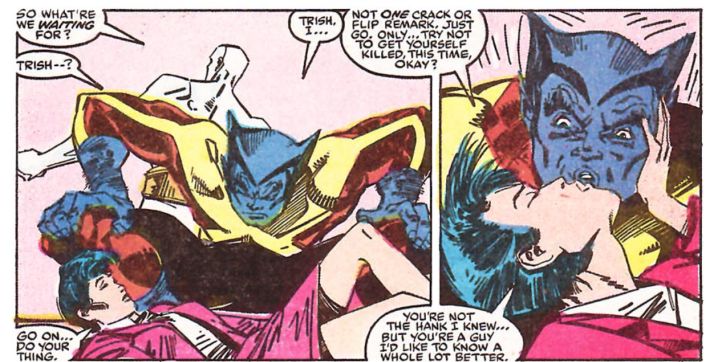 Teebore's Take
Much like X-Men #240, which was an "Inferno" issue but seemed primarily concerned with the Marauders rematch, this issue is set against the backdrop of the demonic invasion (and features Cyclops and Marvel Girl continuing to track down Christopher) but chiefly uses that setting as a vehicle to address the Beast/Trish relationship in the wake of Beast's recent return to being blue & furry. It's a situation that needed to be addressed, and also presents an interesting take on Beast: a bit like Spider-Man, he uses his seemingly-comical banter during a fight to downplay the severity of a situation, even while internally he's taking it all very seriously (I can't say for sure if this is the first time such a notion has been suggested for the character, but it's the first time in awhile).

Whether all of this needed to come out in the first part of a big crossover is debatable (though there is some thematic parallels between Beast looking demonic but acting heroically while normal elements of the city are acting demonically), but it does feature a fairly significant event in Dark Angel's reunion with the team (ending the somewhat fractured feel of the book's inter-crossover lineup), and at least X-Factor, like X-Men, has an extra issue devoted to "Inferno", allowing the more significant events to unfold in future issues while making the less "Inferno"-centric elements of this issue not feel like a lost opportunity.

Next Issue
Next week, the first batch of "Inferno" tie-in issues, followed by the "Inferno"-less Excalibur #4 and Wolverine #3.
Newer Post Older Post Home
Posted by Austin Gorton at 12:00 PM