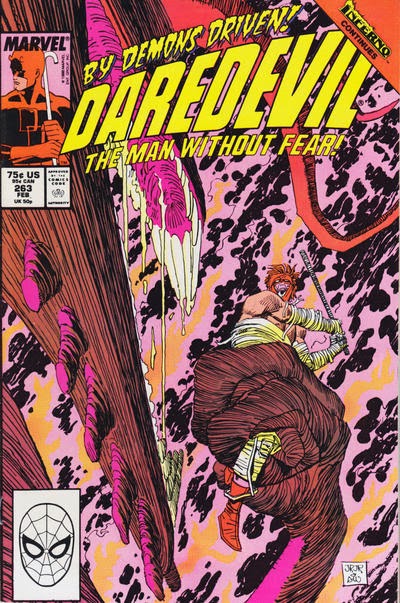 Plot
Avengers #300: Working together, the Captain, Mr. Fantastic, Invisible Woman and the Forgotten One manage to defeat Nanny and the Orphan Maker. As they work to free Franklin Richards from the armor into which Nanny placed him, the boy is captured by demons working for N'astirh. Freeing him from the armor, N'astirh uses Franklin's vast power to reinforce the portal between Earth and Limbo, but the heroes, joined by Thor, track Franklin and free him before defeating a Growing Man android activated by Kang. With the portal closed and the demon effect fading, the heroes retire to the Richards' home, where the Captain, inspired by recent events, reiterates the importance of the Avengers, and asks the assembled heroes to join him in reforming the team. 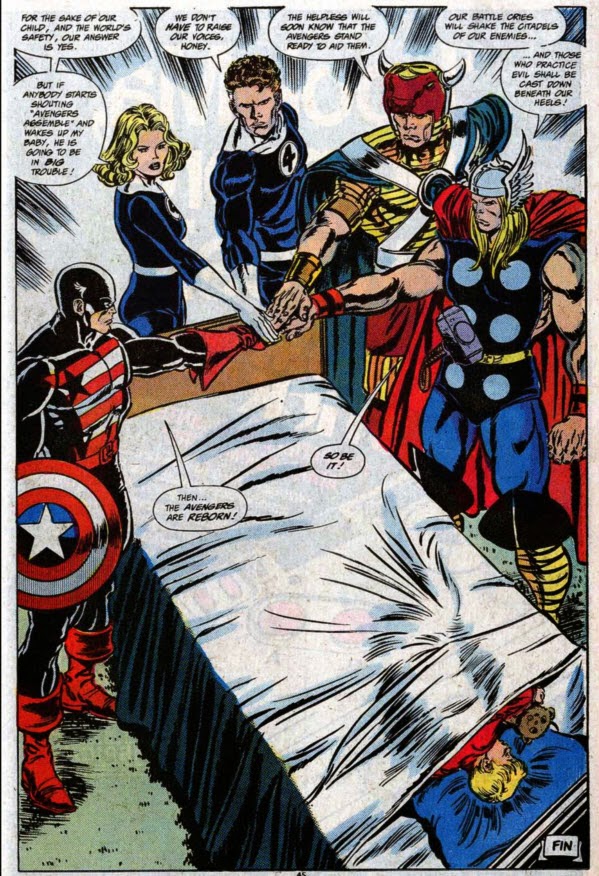 Web of Spider-Man #47: Hobgoblin attacks Harry Osborn at his home, searching for his father's Goblin formula, but is chased away by Spider-Man. Amazing Spider-Man #312: Discovering his old gear in the attic, Harry takes up the Green Goblin mantle to attack the Hobgoblin for threatening his family. Spectacular Spider-Man #147: Wounded, Spider-Man seeks refuge at the Daily Bugle, which is under siege by demons, while Hobgoblin, having been unable to procure Norman Osborn's Goblin formula for himself, makes a deal with N'astirh for more power. Daredevil #263: At the hospital recovering from his battle with Typhoid Mary, Daredevil wakes up to discover the city beset by demons, and ends up battling a massive demonically-possessed subway car. Fantastic Four #323: Amidst the Inferno, Mantis reappears on Earth, and the Fantastic Four help her fend off an attack from Kang even while Human Torch struggles to control his flame powers.

Firsts and Other Notables
In the wake of "Inferno" and Kang's attack, the Avengers are reformed by the Captain in issue #300, following their disbandment in issue #297. The team is initially comprised of the Captain, Thor, Gilgamesh and, curiously, Mister Fantastic and Invisible Woman (thus making Human Torch the only regular Fantastic Four member to not be an Avenger, as Thing previously joined the West Coast branch briefly). The idea of putting the two FF members on the Avengers isn't inherently bad and has some potential, but they won't stick around for long before going back to Fantastic Four, and they continue to wear their FF uniforms (with the big "4" emblem on the chest) throughout their time in Avengers, somewhat undercutting the idea of them as legitimate members of the team.

The Fantastic Four, meanwhile, accordingly in the midst of their Thing-led atypical roster, continue to be down a member, as, just like last issue, only Thing, She-Thing and Human Torch appear in issue #323. Crystal was a member of this roster at one point, but my knowledge of FF at this time is sketchy enough that I'm not sure why she isn't around and/or why her roster spot hasn't been filled.

As it's a 300th issue, Avengers #300 is double-sized and comes with an assortment of extras, including a Walt Simonson-drawn backup story featuring Loki ruminating on the initial creation of the Avengers, a Marvel Handbook-style entry on Jarvis and the Avengers' support staff, and a listing of all past and present Avengers and the issues in which they appeared. 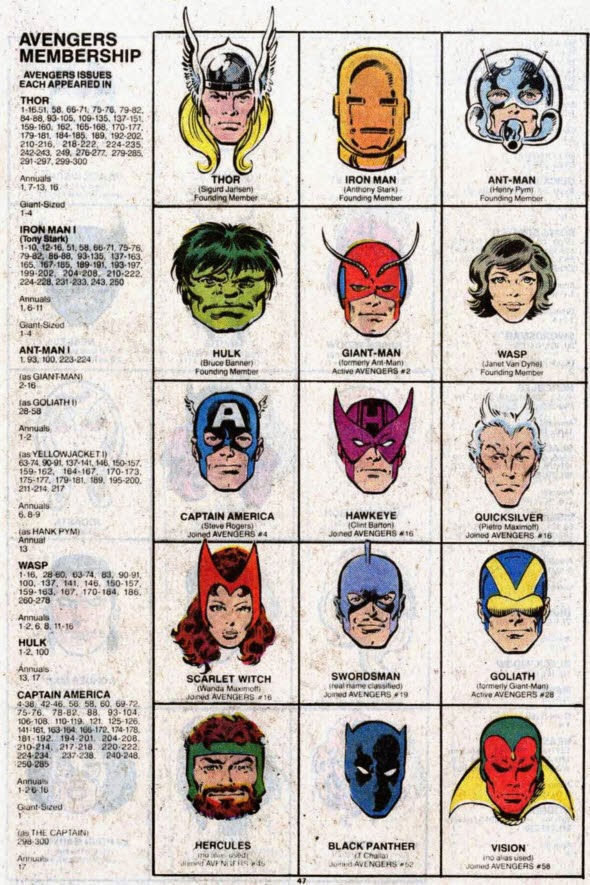 At one point, Spider-Man says that the Hobgoblin he fights throughout these issues is not the original one (who, at the time, was believed to be the deceased Ned Leeds), but rather the former Jack O'Lantern, who has adopted the Hobgoblin's identity. Now, I know enough about the whole Hobgoblin fiasco (which is a twisting mass of aborted storylines, departing writers and editorial edicts to rival anything that came out of the X-office) to know that, ultimately, Leeds' was ultimately a pawn of someone else, but I have no idea if, based on later retcons, this Hobgoblin really is the former Jack O'Lantern or someone else entirely at this point in time. 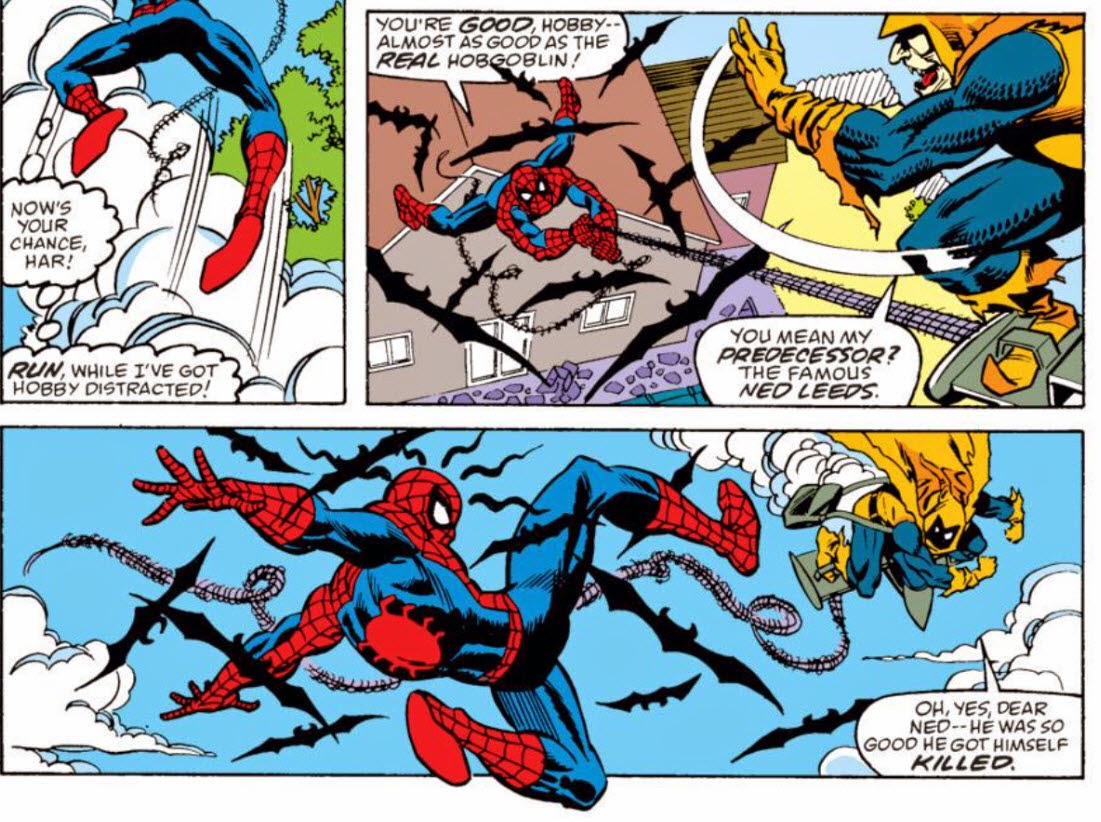 Spectacular Spider-Man #147 ends with Hobgoblin possessed by a demon, thanks to the deal he struck with N'astirh. Hobgoblin will continue to operate as a demonically-possessed being for awhile, before expelling the demon, at which point the demon will act independently as Demogoblin, becoming a significant part of Spider-Man's Rogues Gallery throughout the 90s. Thus, Spectacular Spider-Man #147 is considered the first appearance of Demogoblin, after a fashion. 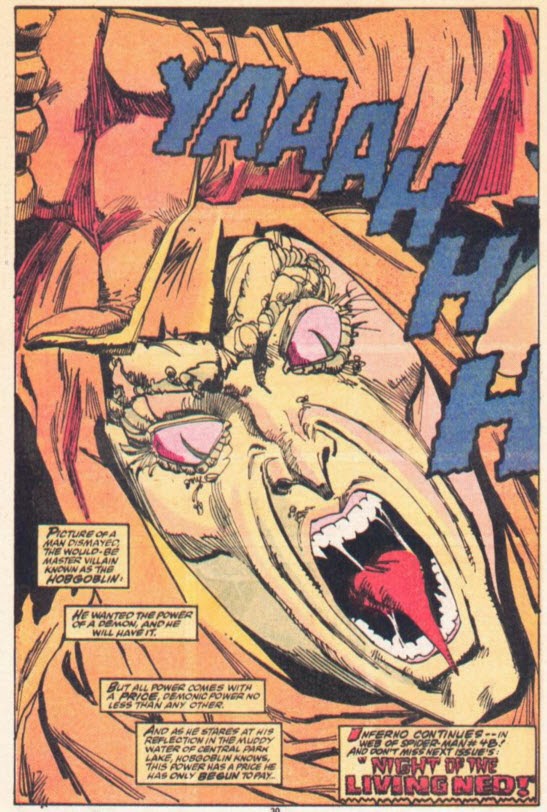 In my early con going days, copies of Amazing Spider-Man #312 were always slapped with a high price tag, even above the price of the surrounding MacFarlane-drawn issues of the title, most likely due to the "Inferno" crossover and the appeal of a rare Green Goblin/Hobgoblin fight. Also, the cover to that issue served as the cover to an "Inferno" tie-ins Omnibus Marvel released a while back.

Mantis, the former Avenger and Celestial Madonna (a being destined to give birth to the Celestrial Messiah, which prompted a classic Avengers story involving Kang's attempts to control and manipulate the Madonna in which Mantis married a plant alien that had taken the form of her deceased lover, then ascended to a higher plane of being) appears in Fantastic Four #323, because it is written by Mantis' creator Steve Englehart, and wherever Englehart goes, Mantis invariably follows (even across companies). 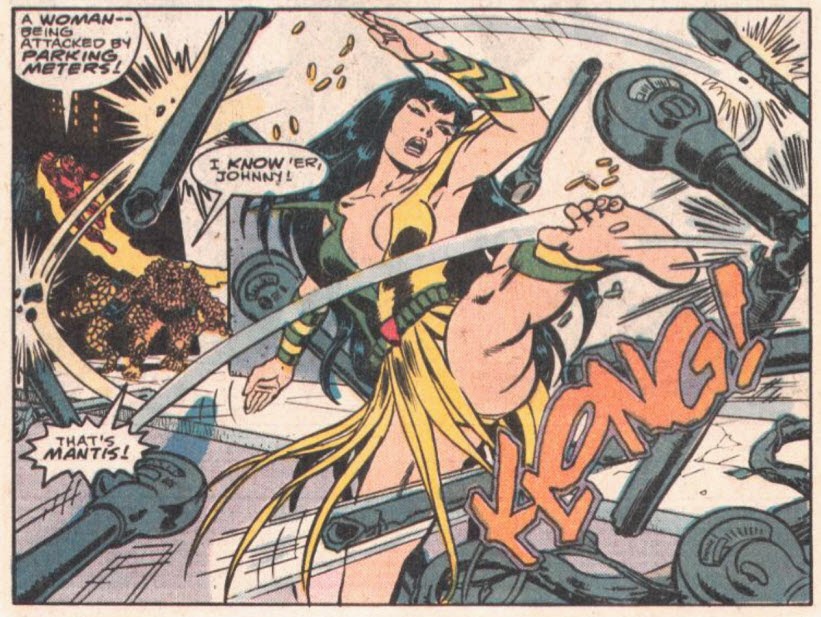 The Chronology Corner
N'astirh's appearance in Avengers #300 takes place between X-Terminators #3 and #4, while his appearance, now techno-organic, in Spectacular Spider-Man #147 takes place after X-Factor #37, and before Excalibur #6.

It's unclear if the Kangs which appear in Fantastic Four and Avengers are the same Kang - Wikipedia suggests it is (and places the events of Avengers before those in Fantastic Four), while the Marvel Chronology Project considers the Kang in Avengers #300 to be "Fred Kang", an iteration of the character created by all his time traveling (as opposed to "Kang Prime", the "main" Kang) who briefly joined the Council of Cross-Time Kangs during the story which led to the Avengers' disbandment.

A Work in Progress
As Harry Osborn leaves Manhattan in Spectacular Spider-Man #147, a barrier keeping demons inside the city is referenced, with a footnote pointing to the X-books. It might come up later in "Inferno" (I honestly can't remember), but thus far, nothing has been said about the demons being somehow contained to the island (beyond the general notion that S'ym and N'astirh want to transform the entire planet along the lines of what they've done to New York City). 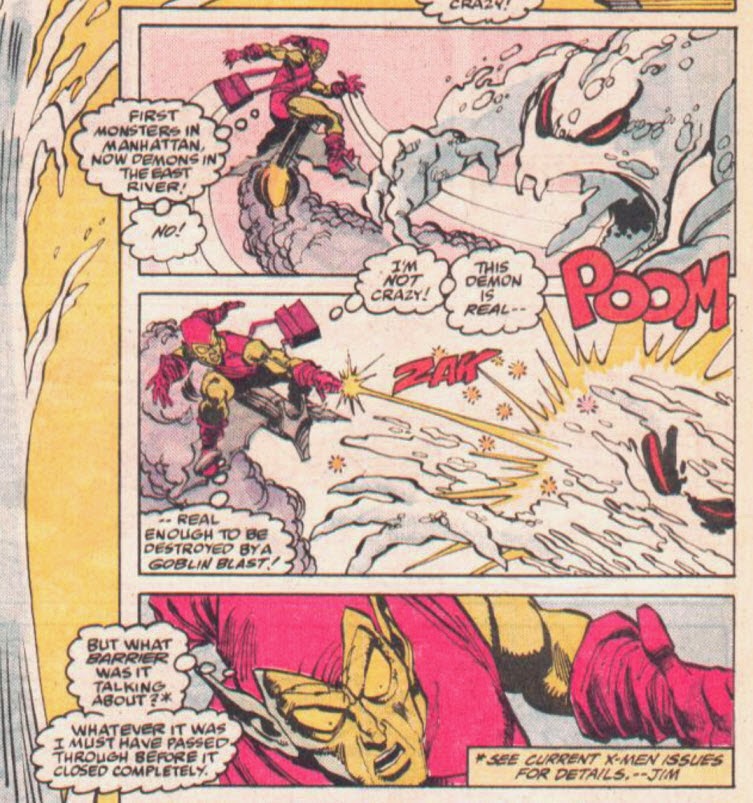 Thing is shown to be capable of casually throwing an object into orbit. 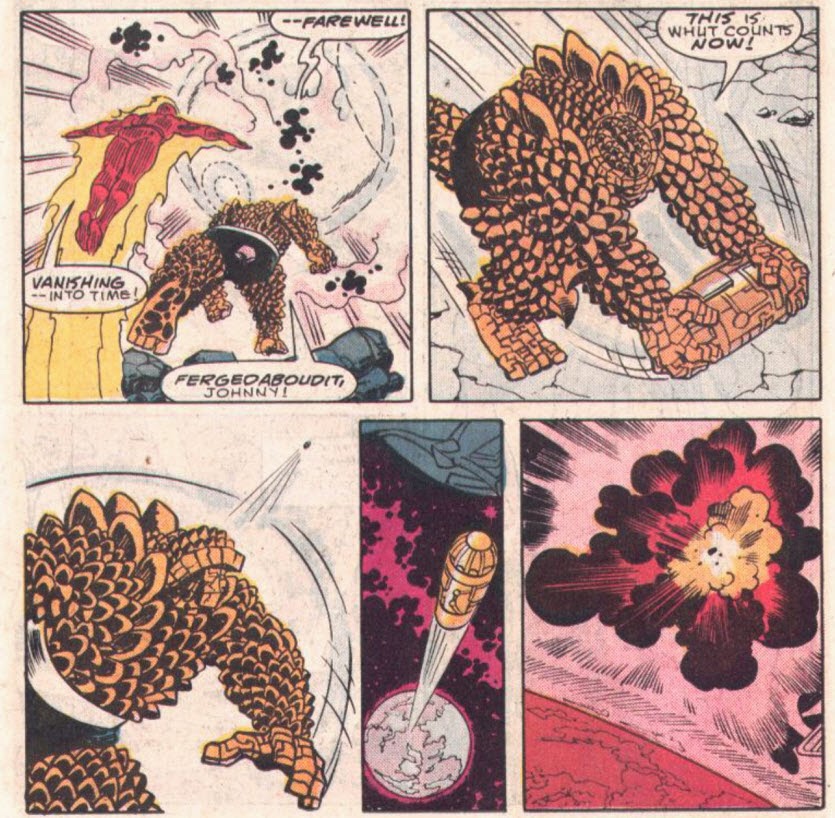 Human Torch continues to have issues powering down his flame powers, something he attributes to the effect of "Inferno". 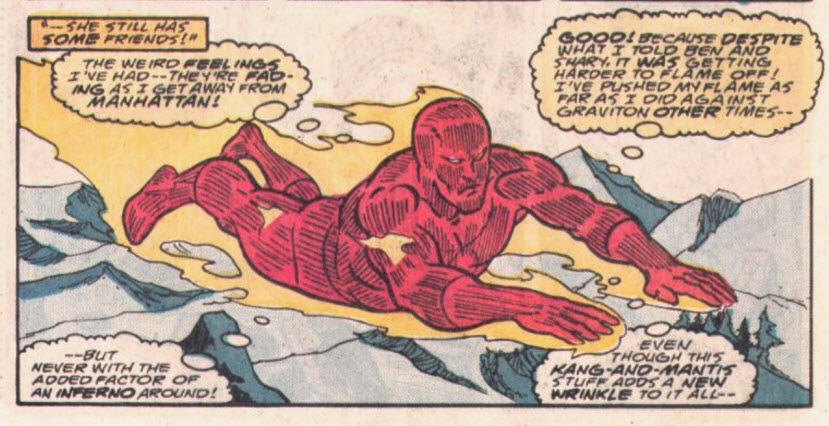 Alerted to Franklin's power by one of his demons, N'astirh orders him kidnapped, initially viewing him as a possible backup to Illyana, and then using him to essentially provide auxiliary power to the pentagram keeping the portal between Earth and Limbo open. 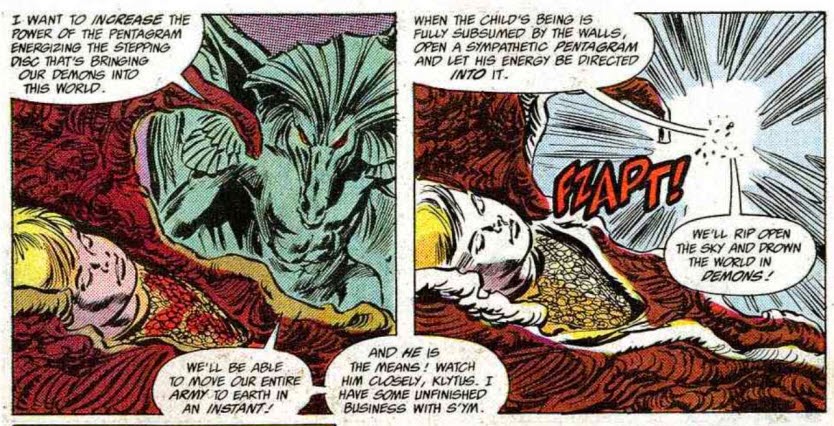 I Love the 80s
As drawn in Web of Spider-Man, Peter Parker is getting dangerously close to mullet territory. 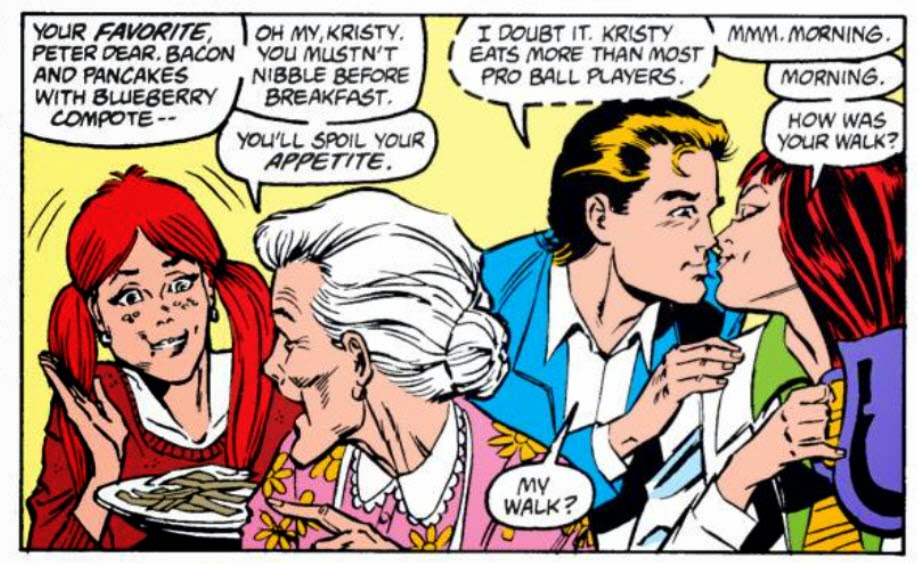 Artistic Achievements
In Avengers #300, Franklin tries to speak but nothing comes out, an effect which, in a neat trick, is visually rendered by an empty speech bubble. 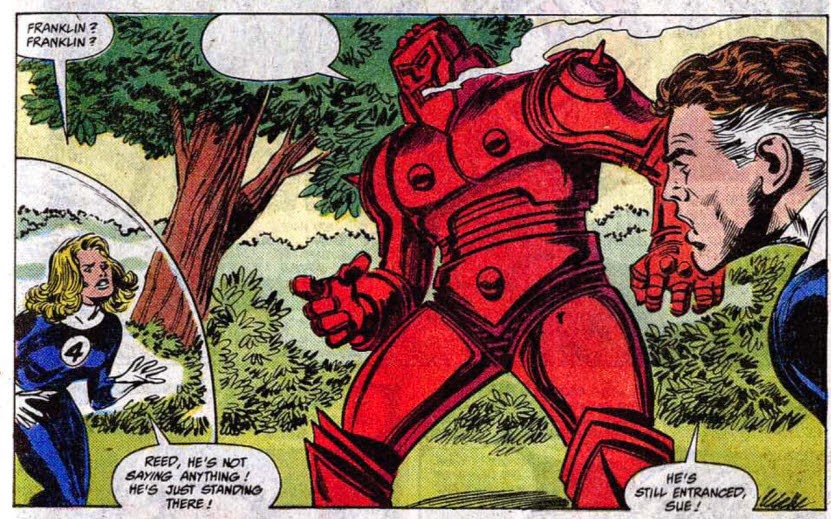 Teebore's Take
This second batch of tie-ins, on sale while the main narrative is heating up (pun intended) in the X-books, continues the trend of not being terribly significant to the overall story. Once again, these issues use the general setting of "Inferno" (Manhattan overrun to various degrees by demons and demonically-possessed inanimate objects), and once again, Avengers is the title that most directly ties-in with the X-books (perhaps due to X-Factor penciler Walt Simonson writing it), in so much as it is the one tie-in in this batch to actually feature a character, N'astirh, who plays a significant role in the story (his appearance in Spectacular Spider-Man #147, is more of a cameo than something which drives the main plot of the issue).

One of the more curious things that becomes apparent in this collection of issues is how, thus far, none of these characters are even aware of the circumstances of "Inferno". Spider-Man has stopped believing the strange happenings to be illusions of Mysterio, while the Captain pays some lip service to the idea of Reed Richards figuring out where all the demons are coming from, but beyond that, these are all micro-level stories where the protagonists, for one reason or another, simply aren't in a position to even learn about what's causing the strange conditions in the city, let alone get actively involved in reversing them. It's an interesting perspective to use for crossover tie-in issues (in that it isn't as likely to drive up sales of the tie-ins), one that really underscores the idea that, outside of the X-books, most of the "Inferno" tie-ins are more atmospheric than essential.

Next Issue
Tomorrow, Excalibur fights their way through Muderworld in Excalibur #5, followed by Wolverine #4 on Friday. Next week, the long awaited meeting between X-Factor and the X-Men in Uncanny X-Men #242.