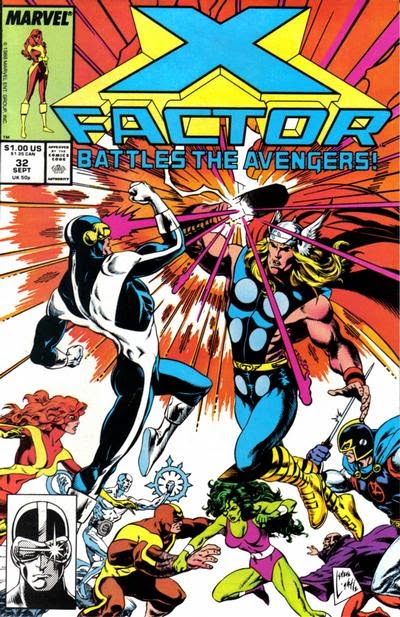 In a Nutshell
X-Factor battles aliens posing as the Avengers.


Plot
As the Avengers donate the land on which Avengers Mansion resided to the city, they are watched by alien Xartans. Returning to their spaceship, the four warriors use their mimicry abilities to take the form of the Avengers in order to avenge the defeat of their leader's father at the hands of Thor. But before they move on the Avengers, their sensors pick up the presence of another spaceship on Earth: X-Factor's Ship. Aboard Ship, Cyclops, Marvel Girl and Iceman are tending to the comatose Beast when they're suddenly attacked by the Xartan Avengers. Ship locks the kids in their room for their safety as X-Factor battles what they believe to be the Avengers, holding back out of confusion. When the kids see a live interview with the Avengers on TV, they realize X-Factor is battling imposters, and when Ship refuses to release them in order to tell X-Factor, they break out. 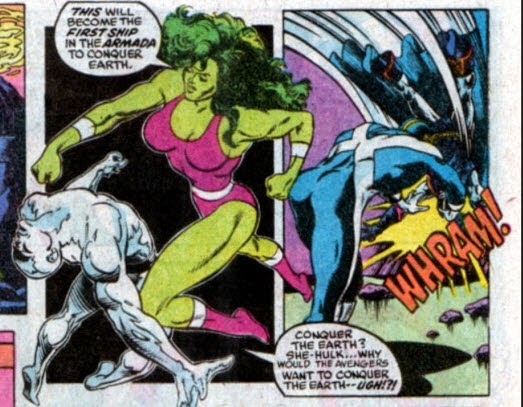 As the kids fight their way through Ship, whom under orders to keep them safe does his best to slow them down, the bloodthirstiness of the Avengers convinces X-Factor they aren't facing the real deal, and they stop holding back. Just then, the kids reach X-Factor and help turn the tide against the Xartans. Elsewhere, a cloaked figure makes contact with the demon N'astirh, and makes a deal: he will provide the demon with mutant infants in exchange for protection from destruction. Back on Ship, the Xartans are placed in stasis while Scott and Jean discuss the kids' upcoming move to boarding school, agreeing on the importance of allowing them to integrate into the real world.

Firsts and Other Notables
This issue marks the first appearance of N'astirh, a demon from Limbo who will be a major player in "Inferno" across all three series. The deal he strikes with the hooded figure (who we'll shortly learn is Cameron Hodge) in this issue will also have ramifications on the X-universe for years to come, more immediately in that the infants promised N'astirh will play a significant role in "Inferno" and then a later New Mutants story arc, and in the long term, by allowing the hooded figure to keep surviving his encounters with the X-Men and continue to bedevil them in one form or another. 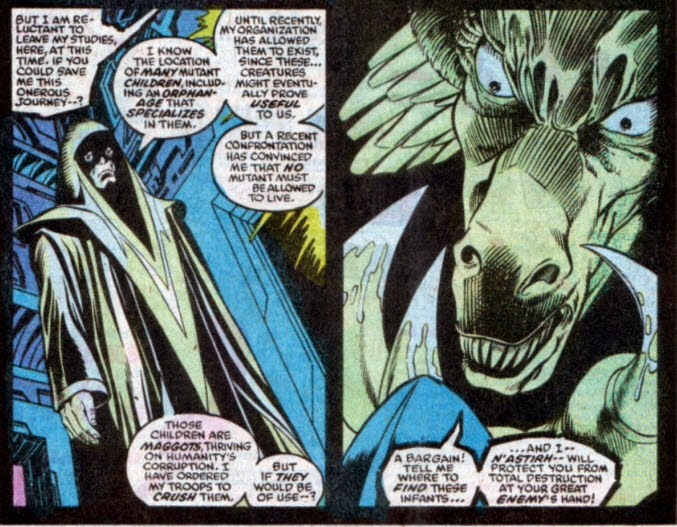 The Avengers (consisting of Thor, She-Hulk, Black Knight and Dr. Druid) appear in this issue between issues #294 and #295 of their series, a time when the book was being written by X-Factor penciller Walt Simonson. Issue #294 saw the death of Marrina, Sub-Mariner's wife and the leviathan mentioned by a reporter in this issue, which led to the departure of Sub-Mariner and Captain Marvel (who was injured fighting the monstrous Marrina) from the team, while #295 kicks off a storyline which finds a possessed Dr. Druid taking control of the team which ends with the team disbanding in issue #297.

The actual Avengers, along with Tony Stark, are seen in this issue donating the land on which Avengers Mansion previously resided to the city of New York. The mansion was destroyed in the wake of the "Under Siege" storyline (which saw the Masters of Evil occupy the mansion and nearly destroy the team), and since then, the Avengers have been operating out of Hydrobase, an artificial island just off the coast. Presumably, the Avengers take the land back from the city at some point, because it won't be too long before they're in a version of Avengers Mansion again. 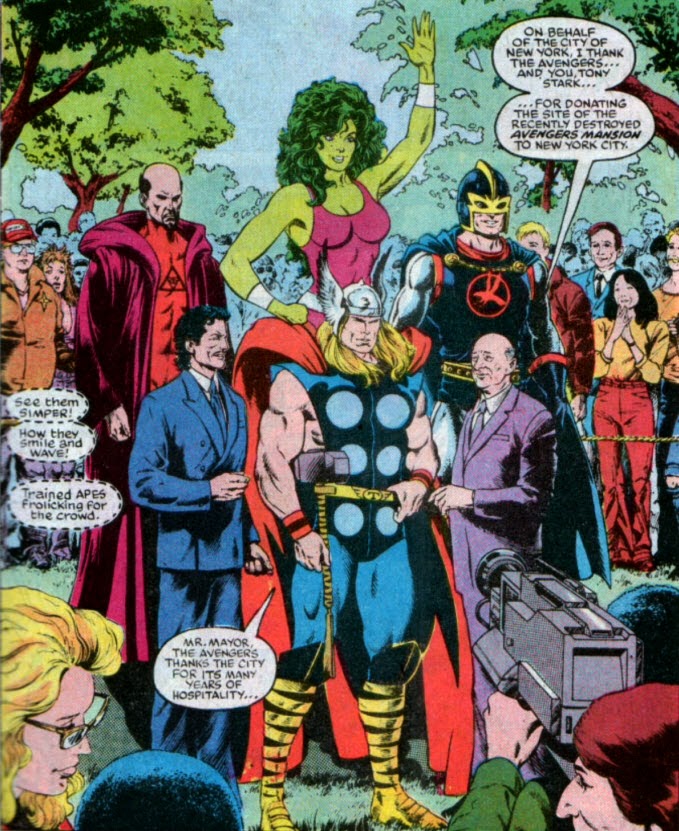 The Avengers X-Factor fight in this issue are actually aliens known as Xartans. Their beef with Thor stems from their previous appearance as the Carbon Copy Men in Journey into Mystery #90, a pretty deep cut from Thor history, though considering this issue was plotted by Tom DeFalco, who was also writing Thor at the time, it's fitting.

While a four man Avengers roster is relatively small, it's also worth noting that at this point in the series, the functional roster of X-Factor is just Cyclops, Marvel Girl and Iceman.

Guest art in this issue comes from Steve Lightle, perhaps most well known for a short run penciling DC's Legion of Super-Heroes. He will become the primary cover/front piece artist for Classic X-Men shortly after this issue.

A Work in Progress
Beast is shown to be in a coma following the events of last issue. 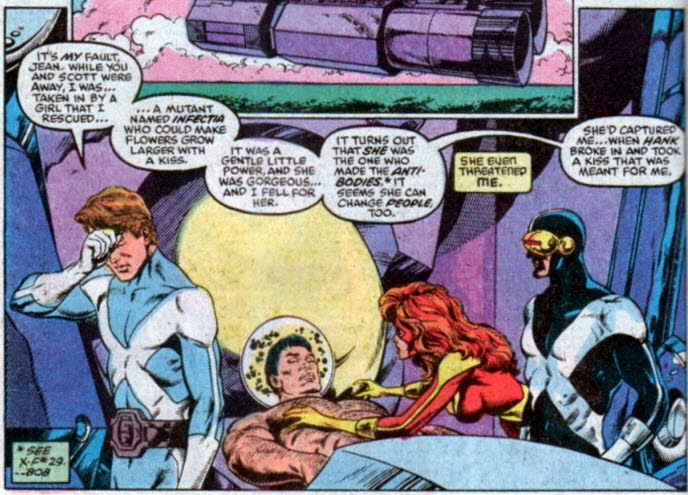 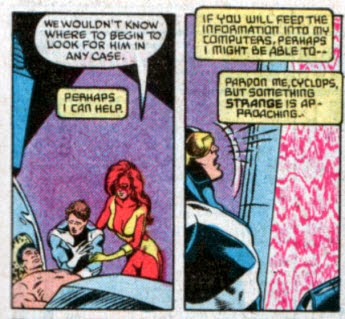 The kids' upcoming move to boarding school is mentioned in-series for the first time (after first being mentioned in this year's annual). It's also established that the deadline for registering per the Mutant Registration Act is only days away.

Marvel Girl possess enough rudimentary awareness, despite her lack of telepathy, to fight off the fake Dr. Druid's mental attack.

I Love the 80s
Boom-Boom wonders why the high-tech Ship doesn't have a CD player while an Alf poster hangs on the wall. 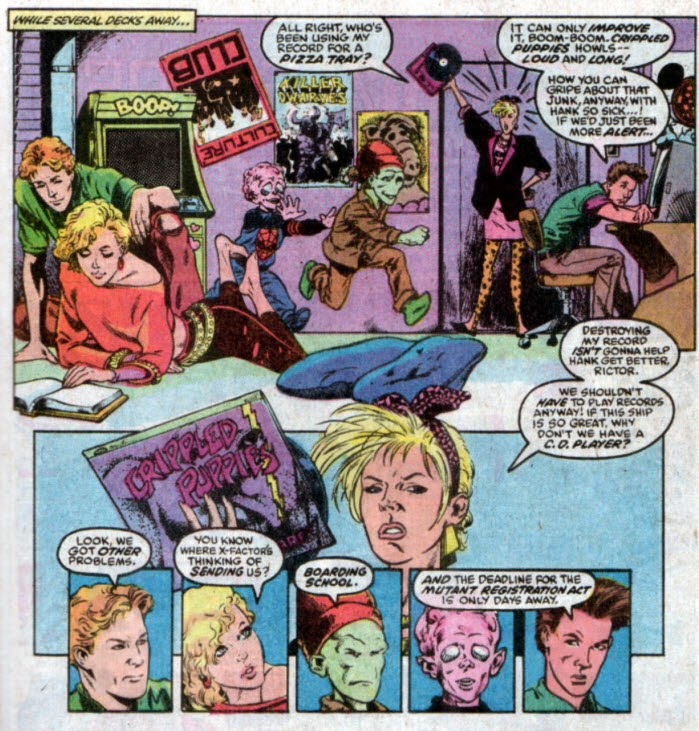 The Awesome and Terrible Power of Cyclops
Bemoaning all the recent death and destruction of late, Cyclops of course makes it all about him.


Human/Mutant Relations
Scott and Jean discuss putting the kids in boarding school, believing it's important that they learn how to function in regular human society, and wondering if Xavier didn't make a mistake keeping them segregated from humans as kids. 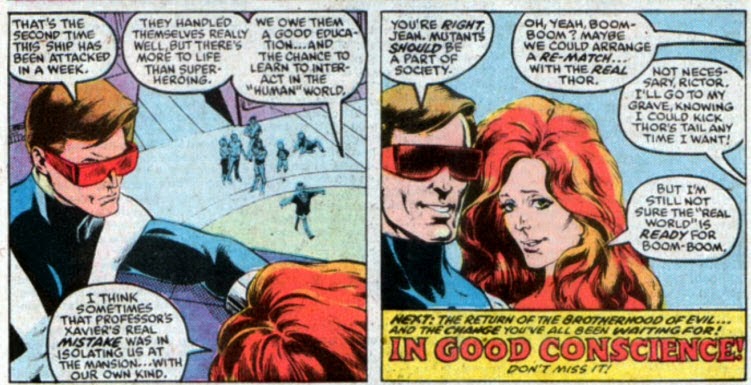 It's in the Mail
An extra long (ans surprisingly timely) letters page discusses issue #29, with more than a couple letters expressing their dislike for Jean's "Maddy is a jerk!" rant.

Teebore's Take
On the surface, this seems like a pretty obvious fill-in issue. There's a guest artist (Steve Lightle, who does some really nice work in this issue - I wish he did more interior art), plus a done-in-one plot from Marvel's Editor-in-Chief featuring X-Factor battling some generic aliens with ties to a series written by said E-i-C. Yet on the margins, some things which are rather significant to the series happen in this issue as well. We see that Beast is in a coma following his kiss from Infectia last issue, which will pay off soon. This also features the first mention, in the series itself, of the kids upcoming departure for boarding school, and while they won't be written out of the X-universe entirely, that does mark the beginning of the end of their time in X-Factor. And finally, this issue features the first appearance of N'astirh, who will go on to be one of the major players in "Inferno" and feature heavily in the resolution to the Scott/Jean/Maddie love triangle. So even though this issue reads on the surface like a bog standard fill-in, it's actually rather important to the future of the series, at least on the edges.

Next Issue
"Earthfall" concludes in Uncanny X-Men #234, followed by the X-Men doing their part in "The Evolutionary War" in X-Men Annual #12, and then we look at the Wolverine serial in Marvel Comics Presents #1-10.
Newer Post Older Post Home
Posted by Austin Gorton at 12:00 PM