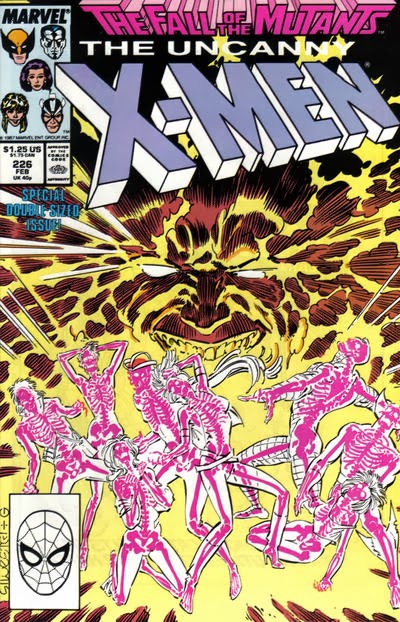 In a Nutshell
The X-Men and Freedom Force team-up in the face of the Adversary's attack in Dallas.

Plot
In Dallas, the X-Men, along with a captive Mystique, are gathered inside Eagle Plaza when Longshot notes that sunlight is pouring in through the hole in the night sky. Outside, the captured X-Men attempt to escape, but their battle stops short when Dallas is suddenly transformed into a chaotic landscape of different eras, from the prehistoric to the futuristic. Meanwhile, Forge and Storm find themselves on a parallel Earth created by the Adversary to be their prison, and Storm cares for the injured Forge. In Dallas, the X-Men and Freedom Force call a truce in order to help defend the city as reporters Neal Conan and Manoli Wetherell broadcast to the world their efforts to save civilians from various extratemporal menaces. 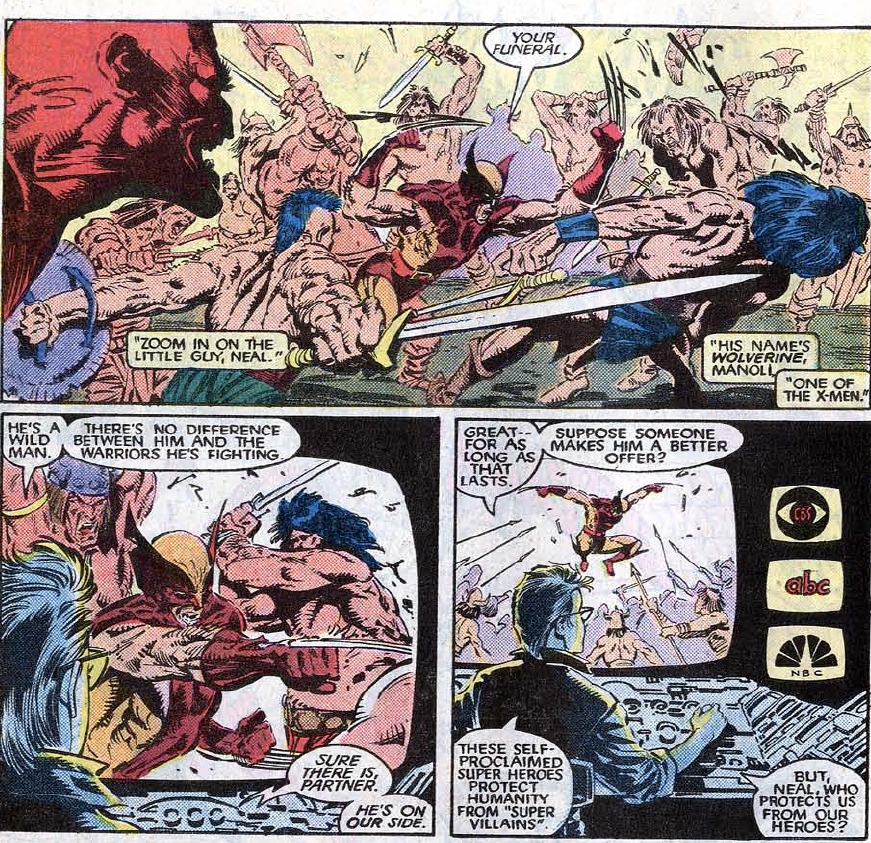 Back on the parallel Earth, a recovered Forge and Storm discover that Forge's mountain of power has been destroyed on this world as well. Forge suggests they can simply live out their lives together, but Storm declines, leaving to find her own path. In Dallas, the X-Men and Freedom Force gather refugees outside Eagle Plaza. Elsewhere, Storm has arrived in parallel Africa, her quest leading her to realize that this world has no soul. In Dallas, a Cheyenne war party arrives to help battle the Adversary, but the Adversary, disguised as a Texan, triggers a massacre in which the Cheyenne are killed. Meanwhile, Psylocke learns Colossus was sent to Dallas by Roma, and since Colossus is being drawn to Eagle Plaza, the X-Men go inside to discover the Adversary has transformed the building in a Vietnamese jungle, complete with Viet Cong. 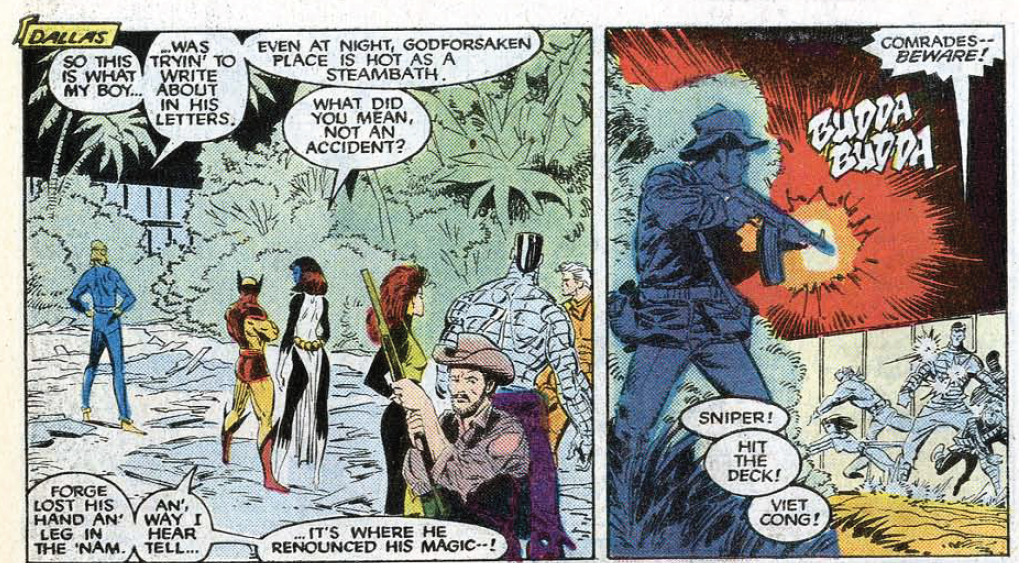 Psylocke announces she can sense and locate Roma. Suspecting a trap, Wolverine nonetheless insists on tracking down Roma, saying that if the X-Men are going to die anyway, he'd rather go out doing something meaningful, and the rest of the X-Men agree. Elsewhere, Forge and Storm agree to try and return to Earth and stop the Adversary. Using a device he cobbled together, Forge manages to restore Storm's powers, after which she's able to power a portal to send them home. Back on Earth, the Adversary senses their arrival and drops his disguise, seemingly destroying Eagle Plaza with Neal, Maddie and the X-Men inside.

Firsts and Other Notables
Storm regains her powers in this issue, courtesy of a device built by Forge during their time in the parallel world to which the Adversary sent them, thus ending her tenure as an interesting character (Kidding! A little...). He notes that his original Neutralizer essentially just suppressed her ability to consciously access her power, not eliminate the power entirely, and suggests that she may have even subconsciously influenced the weather at times, providing an explanation for those times (such as issue #201 and the Fantastic Four vs. the X-Men limited series) when just such a thing seemed to occur. 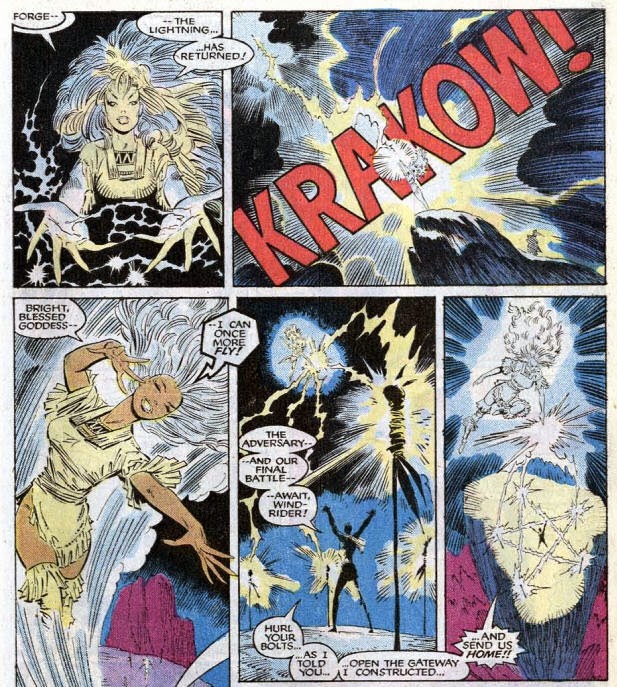 This issue marks the first appearance of Neal Conan and Manoli Wetherell, a reporter and camera operator who make it into Dallas, commander a futuristic news van, and proceed to broadcast the events inside the city, including the X-Men's acts of heroism, to the world. Neal, who reported on the trial of Magneto in issue #200 but was unseen, as well as Manoli, become semi-recurring characters for Claremont, basically whenever he needs a TV journalist for a story. 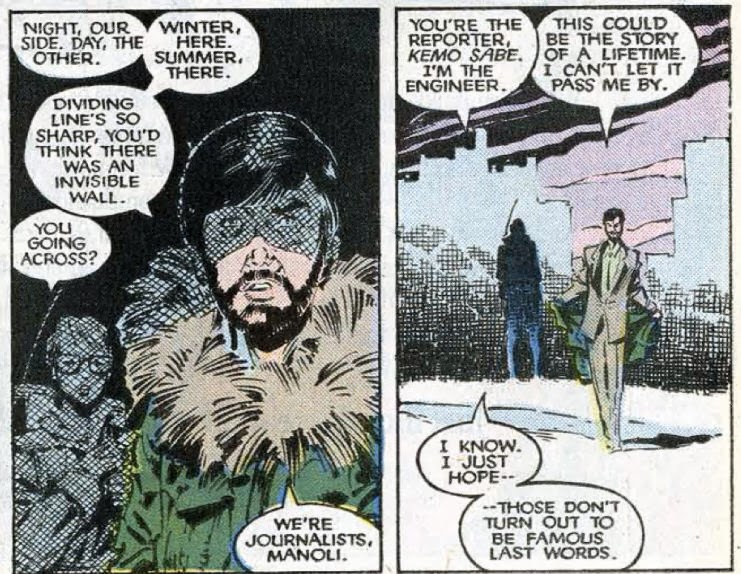 In the wake of the chaos engulfing the city, the X-Men and Freedom Force declare a truce in this issue. Though Freedom Force will continue to make appearances in the series and be formally opposed to the X-Men, as well as act unscrupulously elsewhere, this effectively marks the end of any direct X-Men/Freedom Force conflicts in Uncanny X-Men.

As with the middle chapters of all the "Fall of the Mutants" stories, this issue is double-sized. So keep in mind that means this week I'm essentially reviewing SIX issues.

A Work in Progress
The "X-Men will die in Dallas" gets an equally-alliterative time stamp from Destiny this issue: they will die at dawn.

Before the truce is called, Spiral attacks Dazzler, fusing Destiny's mask to her face with magic (the dagger sticking out holds the mask on but doesn't affect Dazzler), blinding her, a condition that remains through next issue. There's probably some symbolism on Claremont's part here, but I've never been able to parse it (granted, I've never tried very hard), and it ends up reading as just an odd little detail that Dazzler spends most of this story blind, with Destiny's mask stuck to her face by a magic knife. 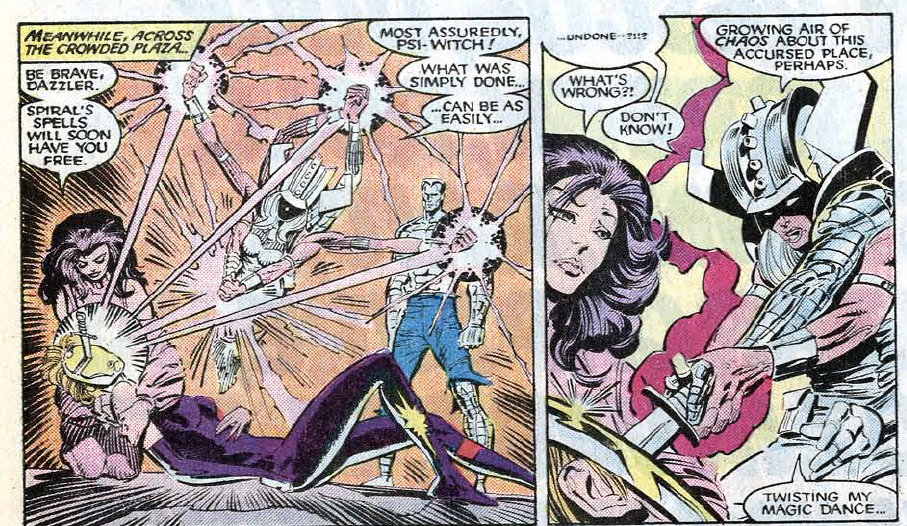 After a group of present day rednecks callously slaughter a group of Cheyenne who arrived to help battle the Adversary, a horrified Crimson Commando wonders if humanity is even worth saving, a nice little character bit for him in the midst of all the big action.

X-Factor's battle in New York with Apocalypse is referenced (though the footnote that references the current issue of that series should point to #25, not #26), and it's established that both the Avengers and the Fantastic Four are being held in reserve until its determined which situation (New York or Dallas) needs their help more. 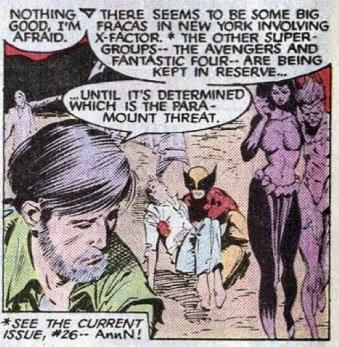 Destiny refers to Colossus' presence in Dallas as a "temporal fluke".

Psylocke knows who Roma is - I assume they interacted during Psylocke's time as a supporting character in her brother's series.

I Love the 80s
Forge tells Storm that the Adversary views his foes as pieces in the game he's playing, and that he'd rather keep Forge and Storm alive as pawns than kill them outright. 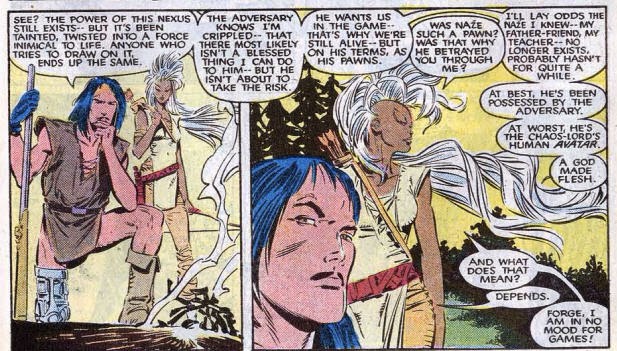 While the Cheyenne's knowledge of the Adversary, in-universe, makes sense (both Forge and Naze are Cheyenne, and had been preparing to battle him for some time), it's unclear why they arrive dressed like it's the 1800s. 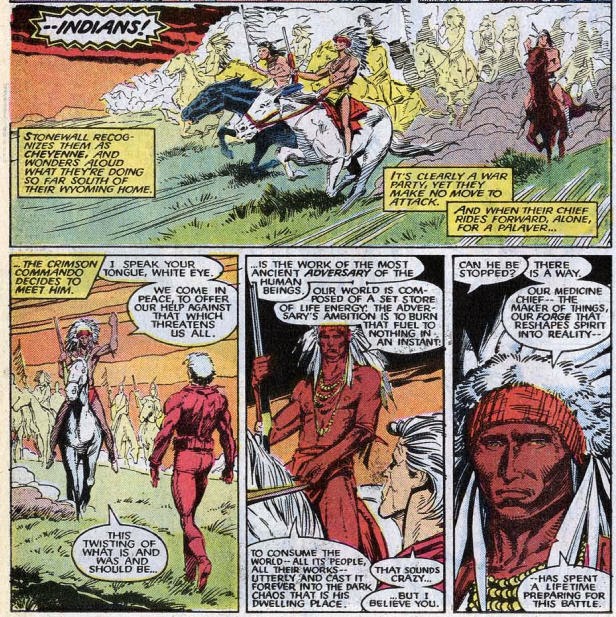 Claremontisms
Dazzler is able to partially absorb the shockwave from Super Sabre's sonic boom move, dulling the effect, an example of two clever Claremont power usages battling it out with each other. Also, Spiral is calling Dazzler "Lightengale" now. 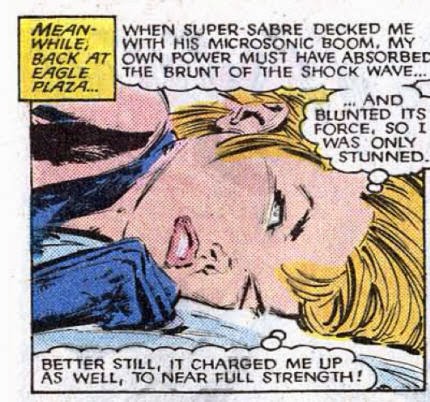 In addition to the allusion in the story's title, Wolverine explicitly compares the X-Men and Freedom Force to the Spartans at Thermopylae. 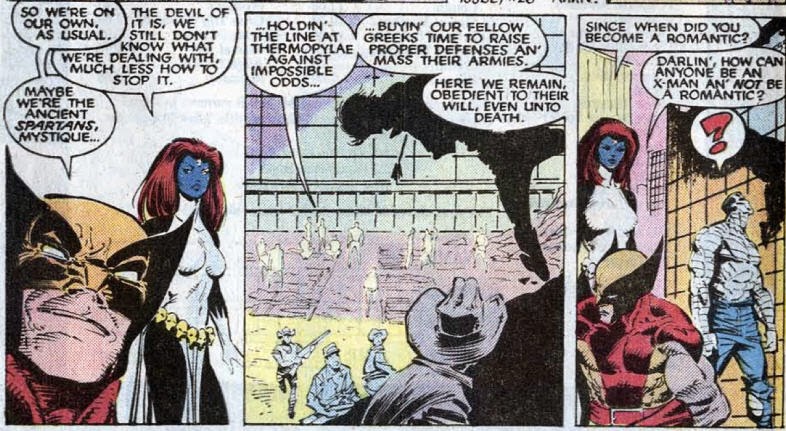 The Best There is at What He Does
This issue opens with Wolverine still recovering from last issue's laser-induced injuries, and reminds us that Wolverine still feels the pain from his injuries as they heal.

Human/Mutant Relations
Neal and Manolli debate the heroism of the X-Men, with Manolli insisting its the power the X-Men have that makes them dangerous, as power corrupts. 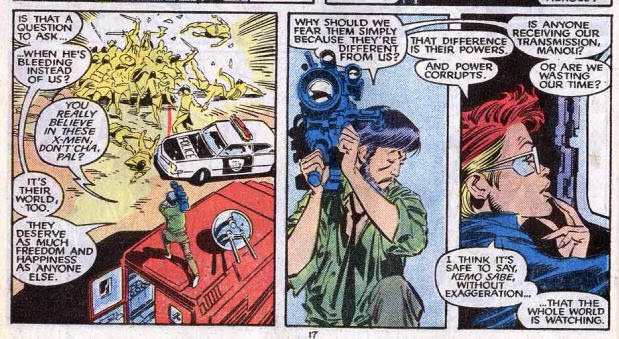 Havok points out that for the first time, there are cameras capturing the X-Men in action. 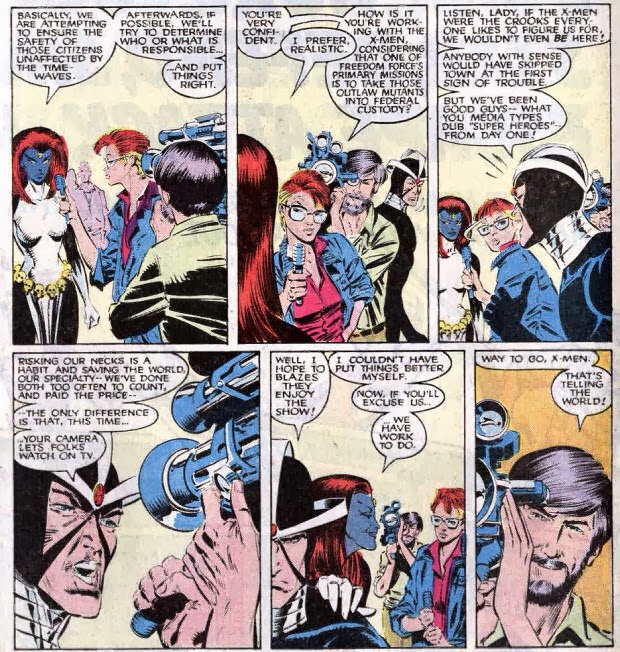 When the Adversary-as-Texan starts badmouthing mutants, Mystique tells him to get out before she forgets which side she's on. 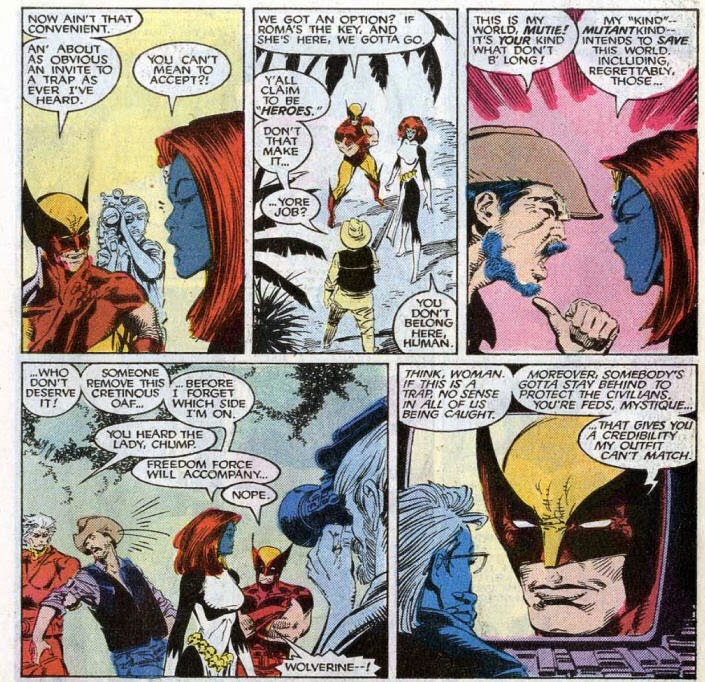 For Sale
Remember Captain Power? Probably not. But for a hot minute there in the late 80s, I thought these action figures were the coolest damn thing (the one or two I had, at least), even without owning the thing that interacted with the TV that was the whole schtick of this particular toy line. 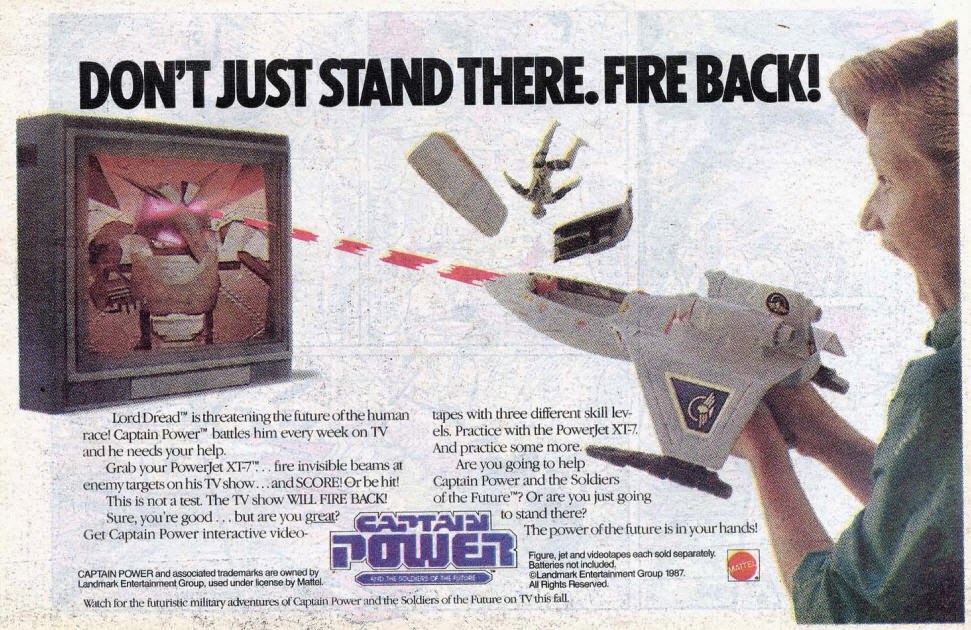 Teebore's Take
With the middle chapter of each series' "Fall of the Mutants" storyline a double sized issue, the bulk of each story gets handled there, with the final issues serving more as a denouement for the storyline. Uncanny X-Men is a little different, in that the X-Men's final confrontation with the Adversary is saved for next issue, but this issue still manages to move all the players, including Storm and Forge, into place for the climax.

But as important as this issue is to the overall "Fall of the Mutants" plot, where it really shines is in the smaller moments that spin off from the central conflict: the novelty of the X-Men and Freedom Force teaming up in the face of a greater threat (a favorite technique of Claremonts; he did the same thing with the Hellfire Club and Nimrod back in issue #209), the running commentary on how dying in the defense of others is a worthy sacrifice, Crimson Commando's horror when the rednecks needlessly slaughter the Cheyenne, Neal and Manoli's mounting respect for the X-Men, the offhand reveal that WWII vet Super Sabre had a son who served in Vietnam, Mystique's refusal to abandon the X-Men to their fate (and Wolverine's well-reasoned rebuttal: that the people of Dallas still need help and Freedom Force has more clout with the government to get it), the irony of the X-Men getting a chance to prove their heroics even while Destiny maintains they're on the verge of death, even Blob tossing an objecting Mystique over his shoulder and hightailing it out of Eagle Plaza as the building explodes.

These moments seamlessly blend plot, theme, character and action: the Cheyenne arrive to help battle the Adversary (plot), but the rednecks decide to kill them (theme and action), prompting Crimson Commando to wonder if humanity is even worth saving (character). Once again, Claremont is showing his skill at weaving together all the various elements of a comic book story, even quieter, seemingly-offhand moments as well the big ones involving main characters or significant plot points. The end result is an issue that while, overall, an important chapter in the ongoing story, is even more entertaining and enjoyable for its parts than for its whole.

Next Issue
Tomorrow, a New Mutant falls in New Mutants #60, and Friday, X-Factor battles the Horsemen in X-Factor #25. Next week, the final showdown between the X-Men and the Adversary in Uncanny X-Men #227.
Newer Post Older Post Home
Posted by Austin Gorton at 12:00 PM