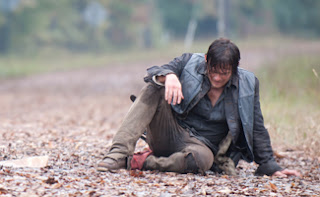 Survival. That’s the name of the game in a zombie apocalypse. Luckily, humans are hard wired for survival. We naturally seek out food, water, shelter. We naturally avoid pain and look for safety. We naturally try to keep ourselves alive. (Well, for the most part. The brain can be confused by modern technology. Oh, and drugs. Drugs can confuse the brain in a variety of different ways.)

No, this isn't your weekly installment of “Dramatically Oversimplifying Neuroscience.” It’s just readily apparent that the characters showcased in the appropriately name Walking Dead episode “Alone” are all being governed by oxytocin.

Oxytocin is running wild between Beth and Daryl. They haven’t acted on their feelings yet but it’s pretty obvious they’re both feeling something. Of course, they don’t have a chance to act on it as Beth is oddly kidnapped by some unknown assailant. Daryl fails to track her down but ends up befriending(?) the group of ruffians that invaded the Rick, Carl, Michonne house. Frankly, I have no idea where that is headed but I would not appreciate a Daryl heel turn.

Meanwhile, Maggie is obviously feeling the lack of oxytocin without Glenn. So she, upon finding the signs for Terminus, decides it’s best to go there. Sasha is stupidly against this idea. Yes, Glenn may not be there but walking to Terminus is a lot better plan than wandering around hoping to bump into Glenn. At least it’s A plan.

Sasha, in fact, doesn't believe she needs oxytocin at all. She's prepared to go it alone without any human contact at all. I’m not questioning her ability to survive on her own but what kind of life would that be? Just ask Morgan for that answer, I suppose.

It started to look like everyone would be separated by the end of this episode. However, Maggie, Sasha and Bob end up back together. They decide that going to Terminus together is better than doing anything else alone.

Other Thoughts:
Again, this another episode that wasn't bad but the plot continues to move at a snail's pace. It took an entire episode for Maggie, Bob and Sasha to decide to go to Terminus. Daryl and (a now seemingly kidnapped) Beth are still no where near Terminus...purposefully anyway. We haven't checked in on anyone else in a couple episodes so who knows what's going on with them.

It really says something about The Walking Dead’s character development (or lack thereof) that the only romantic relationship we've ever cared about is Glenn and Maggie’s. Rick had a wife for half the series and we never really cared about them.

I’m still confused as to what Beth stepped on when she was tracking that zombie.

Only Daryl could get away with telling a woman that she’s heavier than she looks.

Daryl said “I don’t think the good ones [people] survive.” Ummm...except for you and Beth, at least. Right?

Despite it obviously being somebody else’s safe house and Daryl and Beth paying lip service to leaving food for that person they really did just make themselves at home.

Daryl has had two potential love interests, Beth and Carol. I've oddly had the same question for both of them: How old are you?

Something about a horde of zombies suddenly being at the door felt forced. Why or how would zombies pick the door to stand by?

Also, who kidnapped Beth? Were they waiting for her? Or did the person just happen upon her and this person always had a plan that if, by some random chance, they find some woman alone they’re going to put her in a car and drive her to some predestined place. Of course, I guess I’m not sure if she was kidnapped at all?

To be clear, oxytocin isn't JUST about sex. It’s produced through human interaction. So, despite the lack of people knocking boots, the group could still be getting their socialization fill.

Also, apparently oxytocin has been thought to promote “ethnocentric behavior, incorporating the trust and empathy of in-groups with their suspicion and rejection of outsiders.” So...maybe Rick’s group has too much oxytocin already?
Newer Post Older Post Home
Posted by Dr. Bitz at 12:05 PM