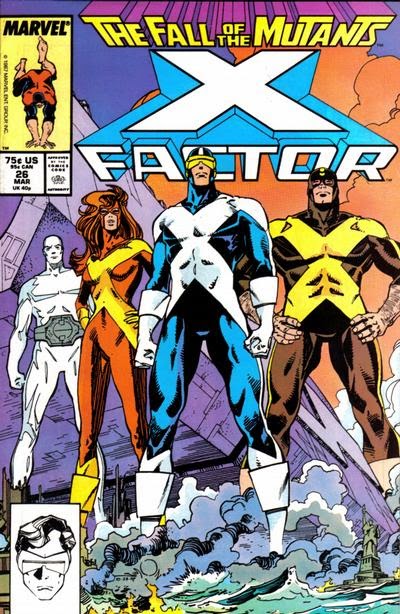 In a Nutshell
X-Factor cleans up after their battle with Apocalypse.

Plot
Outside Apocalypse's ship, police arrive and attempt to arrest X-Factor, but when they hear an explosion nearby, the cops allow X-Factor to investigate. Elsewhere, Apocalypse watches from his new base as he recalls Famine from Kansas. In Manhattan, X-Factor arrives at the site of the explosion, and helps rescue people trapped inside the burning building. As they finish, one of the cops tips them off to a collapsed building nearby, and they rush off to help, rescuing more people. At the police's suggestion, Marvel Girl telekinetically takes the wounded to Roosevelt Hospital. At the hospital, Beast runs into Trish Tilby, and she learns about his condition. X-Factor continues to help at the hospital throughout the night, until they're told things are under control. As they leave, they're approached once again by the police, but are told they're no longer under arrest. Thanks to all the reporters covering their acts of heroism, the city is now considering them heroes.

One of the cops suggest they get some rest back at Apocalypse's ship, and offers to drive X-Factor there in light of Marvel Girl's exhaustion. On the way, they tell X-Factor that the city is holding a parade that afternoon. When X-Factor reaches the ship, they discover that the human reporters are blocked from following them inside by some kind of energy barrier. Inside, Scott and Jean reconcile their feelings for each other. Later, X-Factor awakens to find new costumes delivered to them, created by one of the people they rescued. They emerge from the ship to find the police waiting to serve as their honor guard for the parade. Elsewhere, Apocalypse watches as X-Factor joins the parade, confidant that one day X-Factor will be corrupted by their power and forced to turn on their new human friends.

Firsts and Other Notables
Like the other "Fall of the Mutants" finales, this issue sets up a new status quo for X-Factor, as in the course of the issue their acts of heroism cleaning up after the battle with Apocalypse help win over the public and the authorities enough to rescind arrest warrants and receive a parade in their honor, setting them up as New York City's publicly-known mutant heroes, headquartered in Apocalypse's old ship.


And like New Mutants #61, the new status quo includes new costumes, designed by Walt Simonson, the best of which is easily Cyclops' (this is probably my second or third favorite Cyclops' costume). These are the costumes the team will wear until issue #63 (though Beast will quickly abandon his brown and yellow costume shortly after reverting to his blue and furry look), at which point new series penciller Whilce Portacio will unveil new, more uniformed, costumes for everyone except Archangel and Beast. 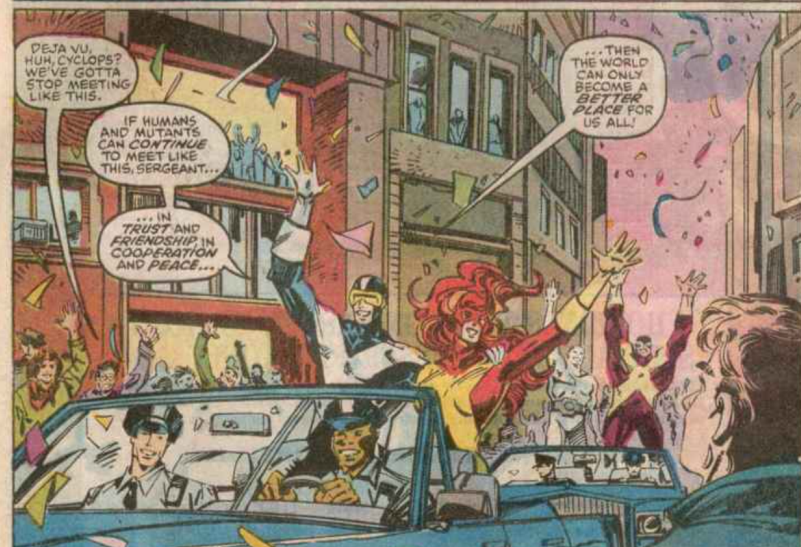 It's revealed that Apocalypse's ship won't allow any non-mutants inside, a condition that will exist for most of its existence. While at the moment X-Factor appreciates it simply for the break it gives them from the reporters hounding them, Apocalypse believes it will eventually sow discord between X-Factor and humanity. 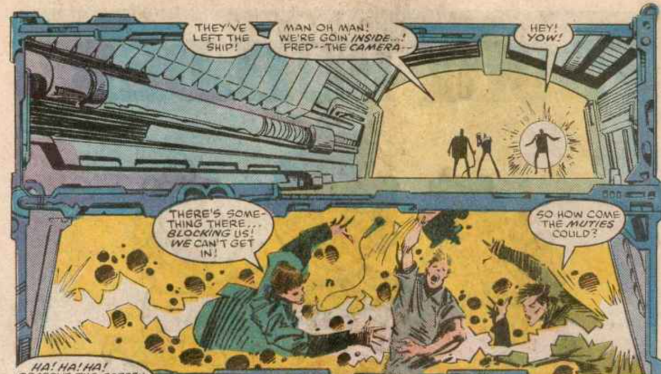 Trish Tilby returns, giving up her hospital bed for someone who needs it more. She then learns about Beast's condition, and confirms that she's never been anti-mutant, only anti-mutant hunting X-Factor. It's also revealed that Candy Southern is the one who tipped her off about the connection between Angel and X-Factor. 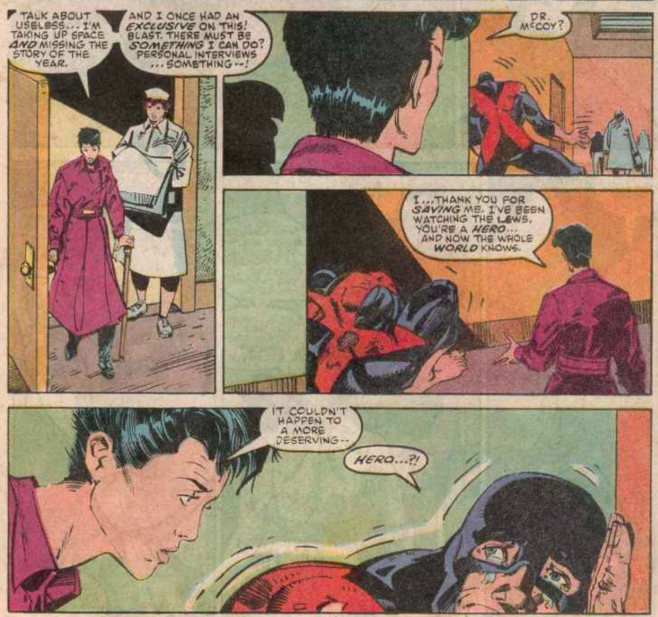 A Work in Progress
In a sign of his still getting over Apocalypse's conditioning and his own bitterness at what Hodge did to him, Angel is less than receptive towards the cops at the beginning of the issue (though he does rescue someone later on) and watches from afar as X-Factor participates in the parade.

Apocalypse, along with War and a Horseman-fied Caliban, have relocated to a new base (Apocalypse claims his ship was the least of his many bases, though later stories will indirectly refute that idea), though we don't learn where it is. He also plucks Famine from her battle with the Captain in Captain America #339. 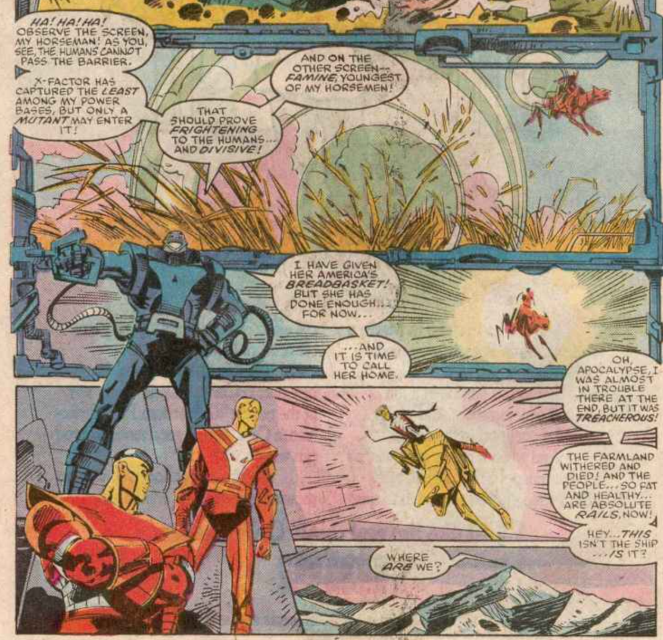 Scott Summers, Husband of the Year
Scott admits to Jean that part of him hoped Maddie was a resurrected Jean when he married her, a pretty obvious retcon of X-Men #174 & #175. He then proceeds to expound on this idea in a way that doesn't exactly paint him in the best light. 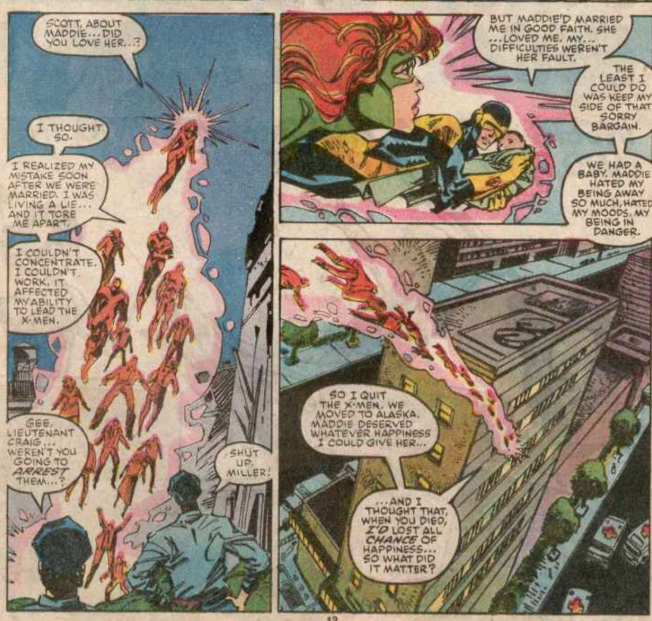 Young Love
It is heavily implied that Scott and Jean do the it this issue (in a sequence of panels I've always liked), after Jean essentially tells Scott its time to let Maddie go and that they've suffered enough before planting one on him. 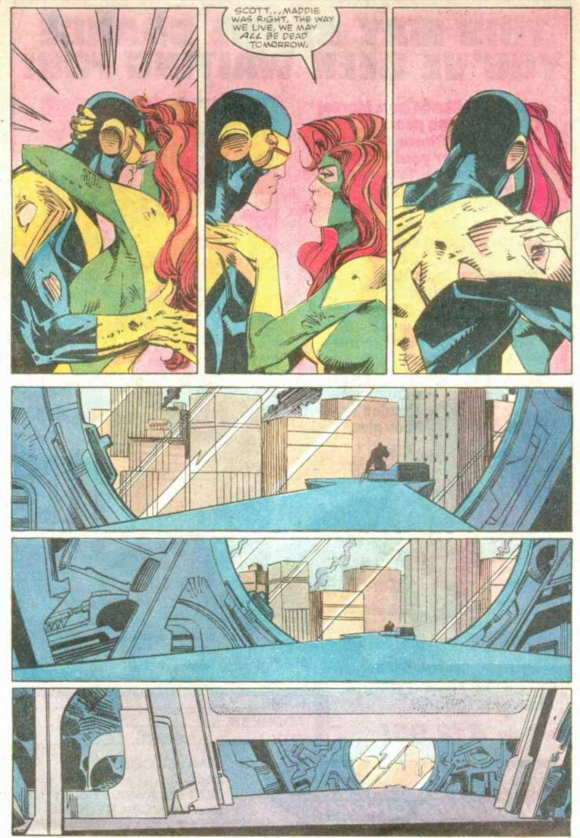 Human/Mutant Relations
A doctor at the hospital mistakenly believes the Right's Smile Face soldiers from the attack in issue #21 were mutants, something which makes Beast sad.

As they spend most of the issue publicly performing acts of heroism, some within the city come to embrace X-Factor as heroes (while Maddie's message to Scott plays in the background).

A little girl gives a passing Marvel Girl flowers, saying her grandma told her it would be okay if she grew up to be a mutant. 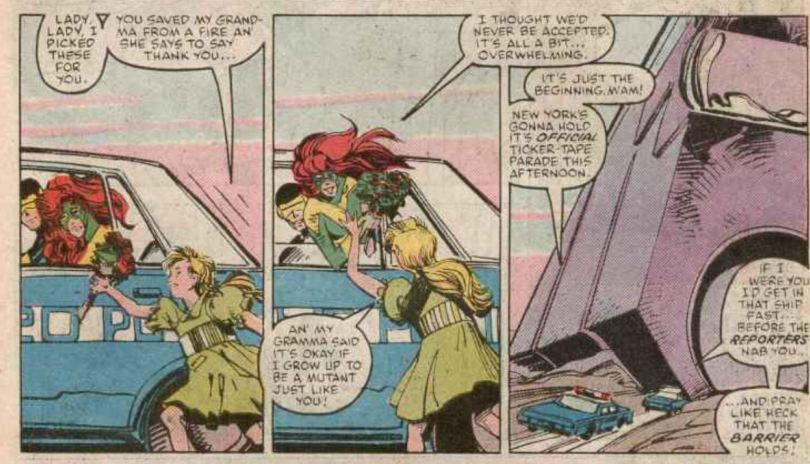 Apocalypse, watching from afar, reaffirms that X-Factor are indeed amongst the strong, but that while they've seemingly earned the humans trust for now, it's only a matter of time before the humans turn on them. 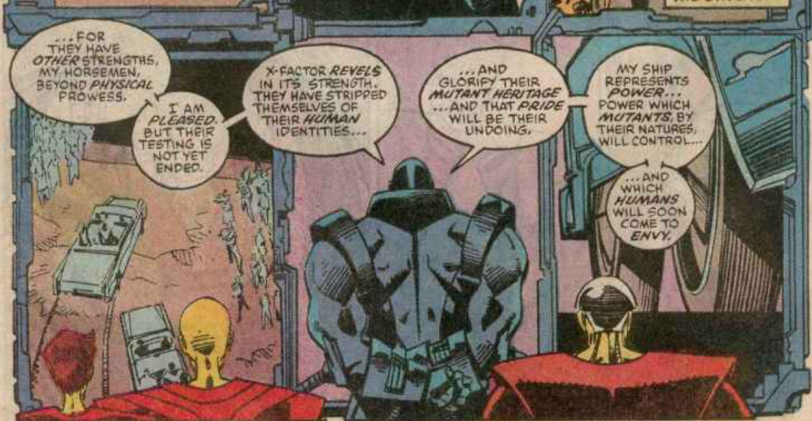 Teebore's Take
Having severed the characters from the original premise of the title by the conclusion of last issue, with X-Factor revealed as mutants to the public, their headquarters destroyed, and the mutant hunting organization effectively dead, Simonson and Simonson use this issue to establish the new status quo for the book moving forward: they will be the publicly-acknowledged mutant team, the Avengers or Fantastic Four of the mutant set. With the X-Men believed dead and acting from the shadows and the New Mutants still students, X-Factor will function in the role of the traditional superhero team, operating out of New York City, amidst a media spotlight the X-Men have always avoided.

Simonson does her best to set up this shift in this issue, devoting it entirely to X-Factor working to rescue people and repair damage done by Apocalypse and his Horsemen, all captured on film by the roving reporters covering their actions or witnessed by the cops who, in light of their efforts, grow increasingly less antagonistic towards them. The ticker-tape parade ending is a bit much (if only for the fact that the city is in no condition to be throwing a parade of any kind, be it for new mutant heroes or not), but the idea of X-Factor becoming public mutant heroes is handled well enough (and the benefit of establishing a new status quo is that it can contain to unfold in future issues). It's amazing what an effect letting the public watch you rescue people can have on your popularity, and by embracing the spotlight the X-Men traditionally shunned, X-Factor ends "Fall of the Mutants" on a rare and surprisingly upbeat note.